[Original] Back to the card show

I whined about missing last month's card show and how being a one-vehicle household now means attending the monthly show won't be a given for me anymore. But I'm happy to say I was able to make it to this month's show on Saturday. Believe it or not, I hadn't bought any cards this whole month up to Friday night when a 2004 Retired Gossage refractor auto popped up on eBay for a good BIN price. But yeah, all the pickups and boxes I've shown on the blog this month were actually paid for prior to 6/1. So anyways, I had the itch to pour through thousands of cards and create a big stack to bring home, and that's just what I did. Let's check out some highlights. 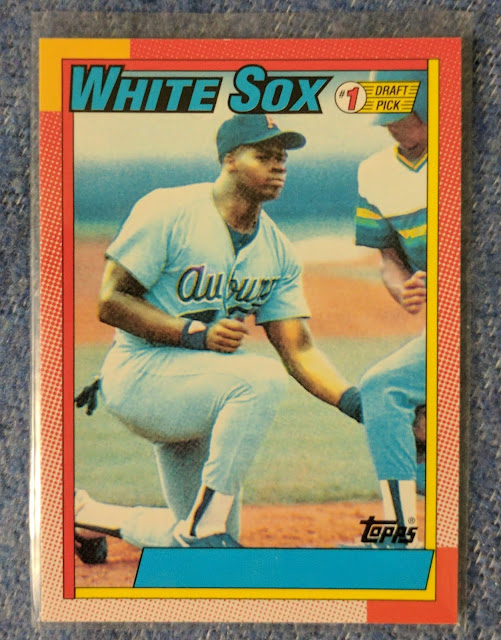 I will pretty much always pick up a NNOF 1990 Frank Thomas "Cards Your Mother Threw Out" 2010 reprint when I find it in Bill's discount bins. Last year I picked up 3 at one show and flipped them on eBay for a tidy profit (not that I do that type of thing very often). I figured this was another one of those, then just about vomited with excitement when I turned it over... 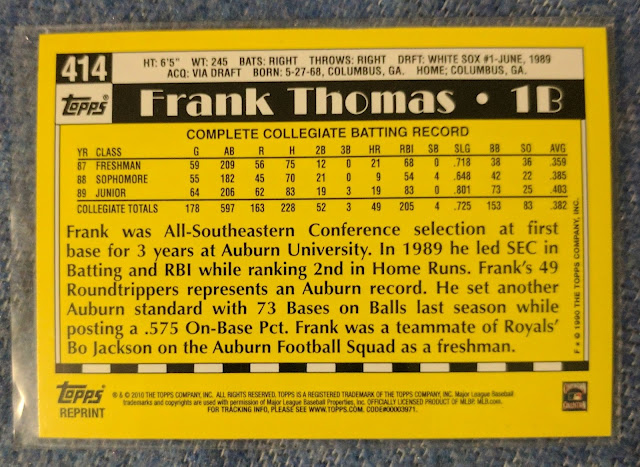 Original Back version! These are super rare. You can find the regular "corrected" reprint original back, and you can find the NNOF reprint with the "Cards Your Mom Threw Out" write-up back, but the combination of the NNOF with original back seems to be a SSP which is damn near as scarce as the original 1990 error. So this is an excellent pickup for my Big Hurt PC. 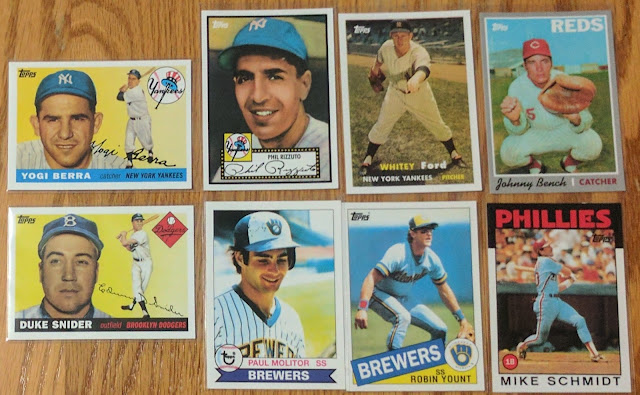 And that Frank was found in a fertile cache of original back CYMTO reprints! While these ones aren't as rare as the NNOF Frank, they're still not that easy to find.

Here are a couple more. The Steve Carlton, like the '90 Frank Thomas, is an error reproduction, with no black ink. I picked up a second Randy Johnson RC reprint from that silly insert set where Topps reimagined notable Topps rookie cards if they were marked with "Future Star" designation. 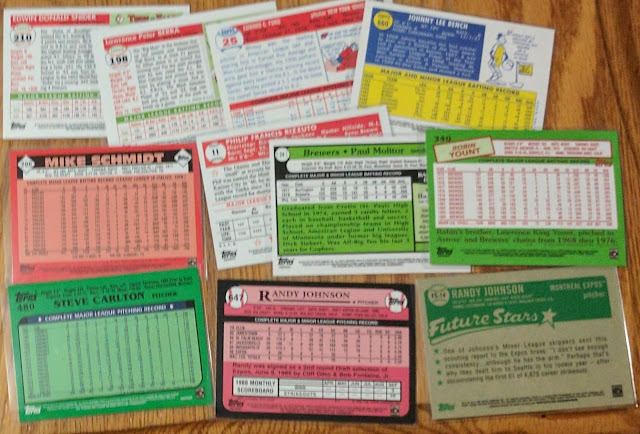 Here are the backs so you can see I'm not yanking your chain. Normally I'm not too crazy about reprints, but these are pretty cool, plus they were cheap. (All the cards in this post are from the quarter bins.) 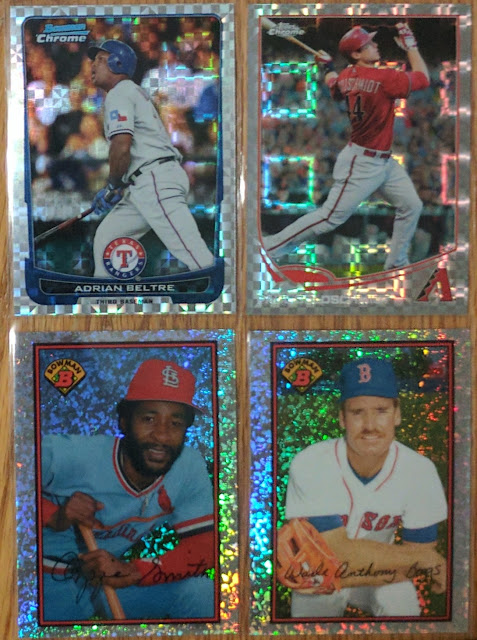 Shiny cards of guys I collect. 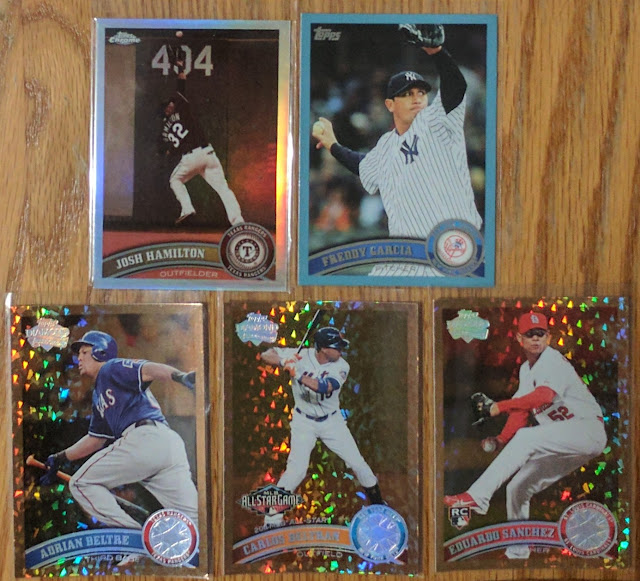 Some additions for my 2011 Topps parallel frankenset. The Josh Hamilton is the first sepia refractor (#/99) to the Chrome portion of the setbuild. 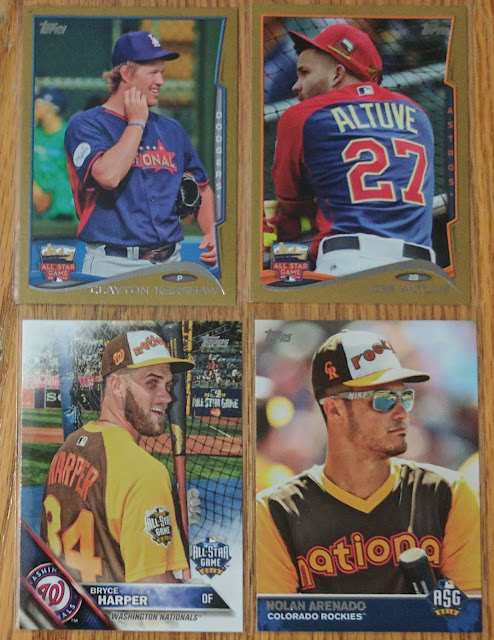 Some All-Star cards, including #'d Kershaw and Altuve cards. As for the faux Padres uniforms, it's nice for me to fantasize about the likes of Harper and Arenado playing for San Diego. 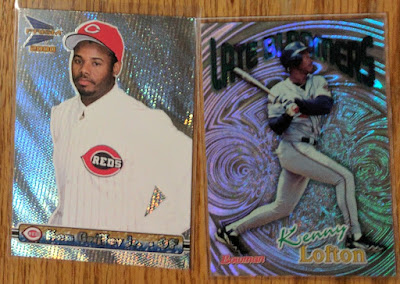 A couple more shimmering cards. There's always so much Griffeys.. I never know what's worth big money and what's not.. but hey, from time to time one jumps out at me, like this 2000 Prism here. And I may make a run at that psychedelic 1999 Bowman "Late-Bloomers" insert set, assuming I can find them all for around a quarter each.

Similar to Griffey, Bill's bins have many (too many) cards from the likes of Bonds, McGwire, and Boggs (and Mattingly, Jeter, Ripken, Arod). Usually I flip through them without hesitation, but every once in a while, something grabs my attention. The Bonds dufex looked kinda neat. As for the '89 Bowman McGwire, what caught my eye is it's the tiffany version, something you don't see too often. And the pic of Boggs pitching is pretty cool.

Well, it's super hot today. I think I'm gonna end the post here, though I've still got more pickups from the show to probably post about this week. See ya! 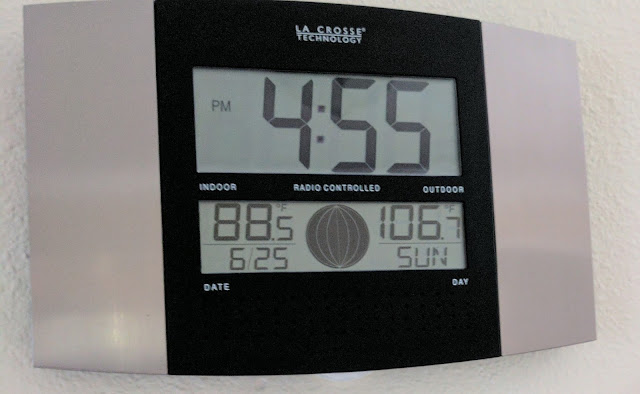