Cody Bellinger custom and my shameful past

Cody Bellinger is the hot NL rookie of 2017, right up there with the AL's Aaron Judge. But while Judge has plenty of cardboard out there and has been included in most 2017 sets, Bellinger has relatively slim pickins to chase on the market right now. The situation is reminiscent of Puig-mania a few years ago. And like with Puig, I'm sure card companies are going to flood the market with Bellinger cards in late-season sets such as Topps Update and hit us over the head with him in 2018. But I got impatient, so I made my own card of him... 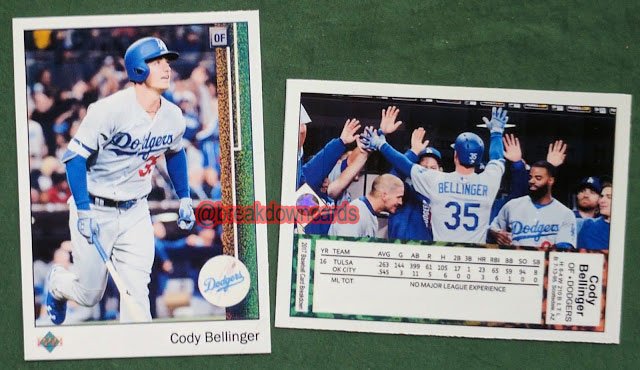 I'm pretty happy with how this faux 1989 Upper Deck card turned out. Using the template I first whipped up for a Vin Scully custom, it didn't take me too long. Even with me being a Padre fan compelled to hate the Dodgers, as a baseball fan, I still love to see a rookie come out of nowhere to take the game by storm. So it's nice to have a card of his now, even if it's not quite real.

Last year, I probably would have tried to sell a few of these to make a few bucks to spend on supplies and cards. But after some hot water last year, I'm done with selling customs. Now I'll just make one copy for myself, and perhaps a couple extras to give to friends. I gotta say it was fun trying to be an entrepreneur. There was even a brief moment back then where I got excited thinking maybe I could make a living off customs if I cranked out enough. How great would it be to quit my dayjob and just work from home creating and mailing cards?! But no, I'll keep on the straight and narrow and stick to making money at my real job.

Howabout a bonus custom for today's post. This next one wasn't made by me, though I did suggest it at The Shlabotnik Report and he executed perfectly...

Baseball card quiz: one of these is a fake 1982 Rod Carew card. Can you spot the impostor?

Oh hey, by the way, ketchupman36 has put up a recap of the big prize he won from my 1000th Post contest, so check that out if you missed it. 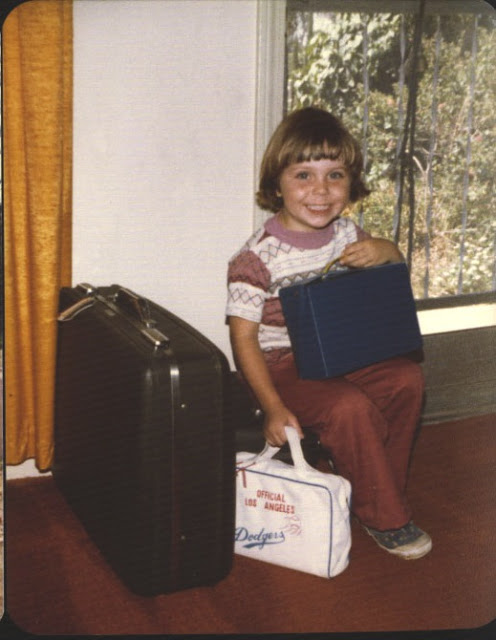 I know I said I'm no Dodgers fan, but I was going through some old photos last night (my aunt just passed away and I wanted to find a nice picture of us) and found this incriminating shot of me from 1981. (Yes, I kinda look like a little girl in that pic.) I remember that little suitcase thing. It eventually ripped apart and I cut out the Dodgers logo to tape on my wall along with other typical crap kids have on their walls. At the time of this photo, I probably couldn't name any baseball player beside Babe Ruth and maybe Mickey Mantle, so I think I can be forgiven for naively betraying my local San Diego Padres. But still.

Anywho.. Thanks for stopping by!
Posted by defgav at 4:01 PM