In the past couple posts, we've taken a look at some of my quarterbox pickups from the latest card show. Now we're getting into the dollar bins (7 for $5 deal.. I managed to round up 14 for a ten-spot). 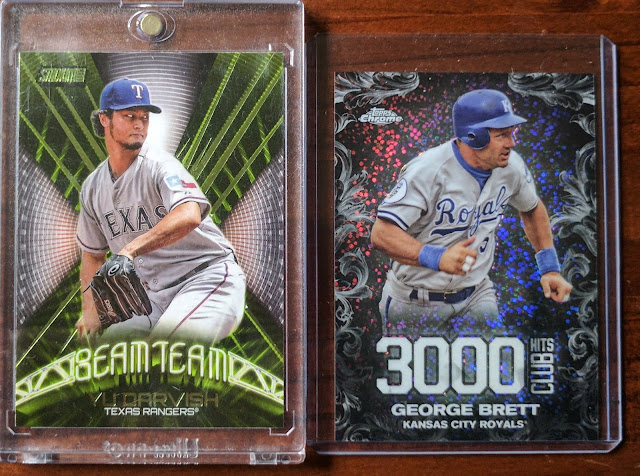 While I kinda collect Darvish, and like the look of these Beam Team inserts, a main reason for grabbing this one was the nice one-touch that came with it. (First thing I do when I step up to the bins is take an overview looking for special cases.. one-touches, graded cards, etc.. as that will often clue me into a good bargain.. though often it's just like an old screw-down case with a 1990 Upper Deck Mark McGwire or someshit.) 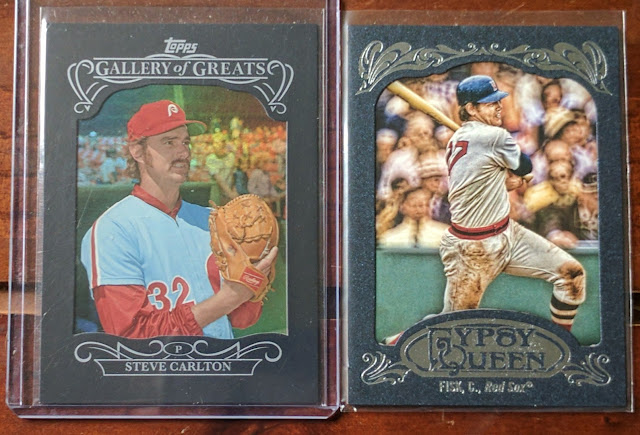 These 2 were actually from the quarterboxes but I didn't get around to including them in previous posts. A nice couple of framed cards, including a needed Lefty from the Gallery of Greats insert set I'm trying to complete, plus a similar looking Pudge, numbered to 500 on the back, I believe.

Trio of retro inserts of young dudes I collect. 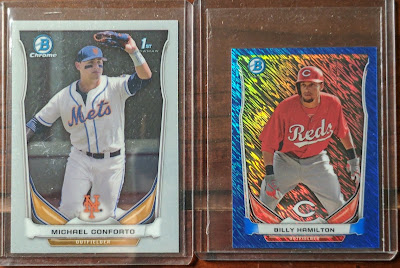 2014 Bowman. Pretty sure I've already got that Conforto. Poor Mets fans have been having a rough season. Conforto has been playing ok, but not quite the force they need to string together more wins.
Billy Hamilton is leading the NL in stolen bases and is on pace to improve his season best total, though his batting average could use improvement. This blue shimmer mini is #/150, if I recall. 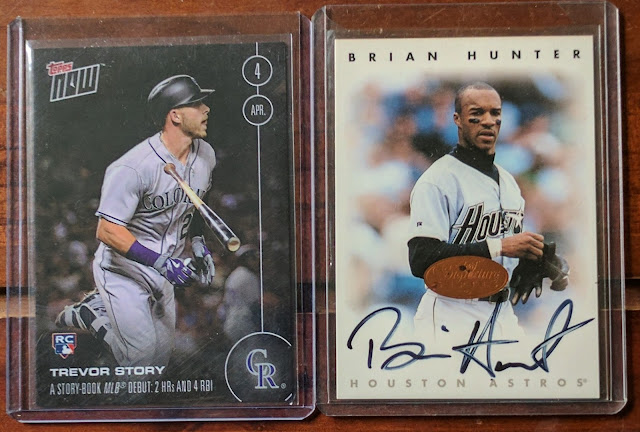 Ha, I only own like 4 or 5 Topps Now cards, one of which is this one, Trevor Story's first Topps-branded RC. I spent a lot more than 71 cents for my first copy back when he was on fire last year, but oh well, grab another one and increase my percentage of the print-run, why not. Hopefully he bounces back sometime.

As for the Brian Hunter, I've kinda got a long-term, back-burner collecting goal of going after the entire 1996 Leaf Signature autos.. at least the ones with the metallic ovals in the middle (ie, not including the Update Series). But there's a super expensive Jeter in there, so that's one goal I might not ever accomplish. But still, if I can pick up needs for under a buck, I probably will. 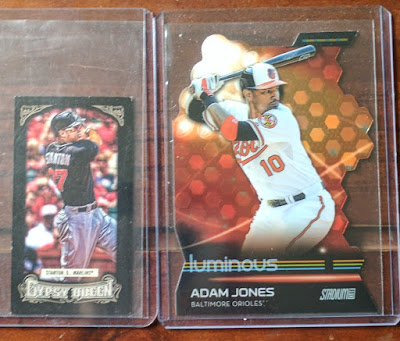 A pair of non-standard sized cards. The Giancarlo is #/199. 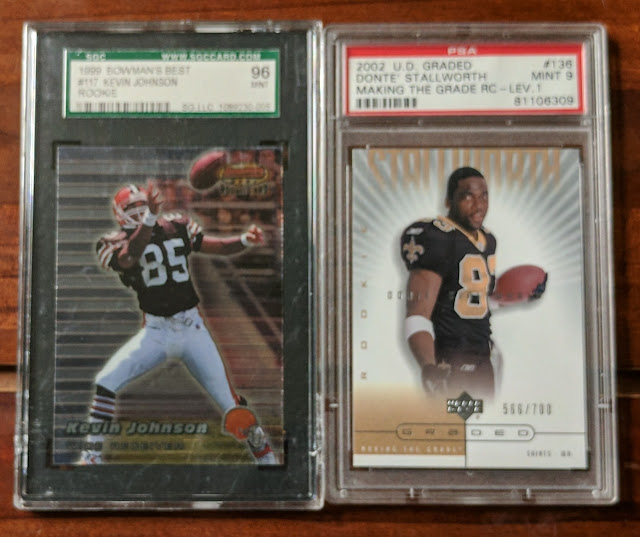 It's hard to pass up graded cards for under a buck when you consider it costs a few bucks just to get them graded. I've got a Browns collector in my trading circle (Angus, right?), so picked up the Kevin Johnson with him in mind. As for the Donté Stallworth, well his was a name that vaguely rang a bell so I grabbed it as trade bait. Anybody want to trade me for it?

I think that's all I have to show today. I also got some cd-rom "cards" that I'd like to rip and post the contents of in a future post. Other than that, that pretty much covers the haul from this show apart from plenty of trade fodder for my usual trader buddies.. some of which has made it into Big Fun Game prize packages., speaking of which:

I was glad when Rod bumped into me at the show so I could hand him his BFG prize, saving myself a little postage. Today I dropped off packages in the mail to the following zip codes: 06457, 14610, 02919, 95119, 55406. Additionally, PWEs were mailed to Billy and gcrl. Julie has asked me to hang onto her cards until the Supreme Court rules on if her trading ban is unconstitutional. If you were among those celebrating my 4 year bloggoversary in the Big Fun Game and I haven't mentioned you by name or zip, that means I'm still working on your package and hope to drop it in the mail no later than this coming weekend. A couple packages that might take a few days longer are Wes (I plan to include the WCOT stuff) and John Miller (nearing the end with that project that's taken me so long!)
Thanks again.. see ya.
Posted by defgav at 3:25 PM