Busting a couple boxes of 2017 Archives

Got my annual pair of Archives hobby boxes yesterday. 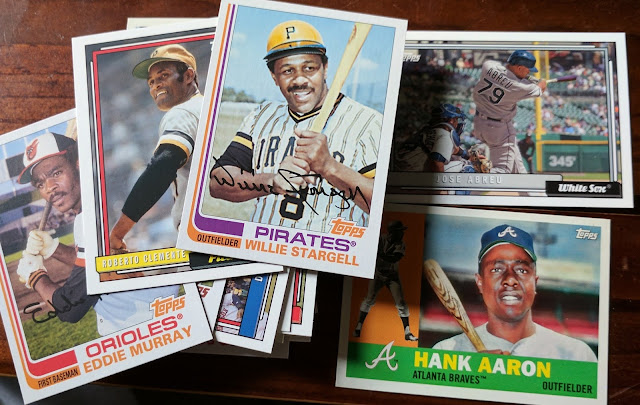 Archives is always good for giving me a nice stack of guys I collect. Topps listened to the complaints about flimsy Archives card stock in years past and definitely upped their game this time with stock that's more in line with the likes of Heritage and Ginter.

If I had to rank them, I think the 1992 cards are the best. The 1982 cards are nice, but has been bitched about before, Archives already used that design not long ago (though this year's version is probably better, thanks to the cardstock if nothing else). I've never been a big fan of 1960 Topps, plus these are annoying because they're "backwards" in the packs (in regards to the orientation of the backs.. so if you want your card backs to face the same way, you've got to flip around all the 1960 cards). One knock I have against the 1992 cards is the stats on the back are truncated for guys with long careers.. boo! Oddly, glorious full (tiny text) stats are crammed in the 1982 backs. But the dark green backs of '82 make it tough to read the tiny text. If Topps was gonna truncate one of these, they should have done it the other way around (truncate '82, leave '92 full). Oh well. 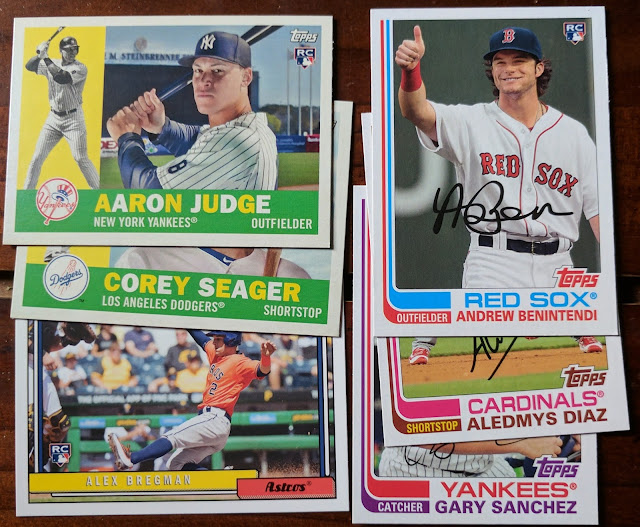 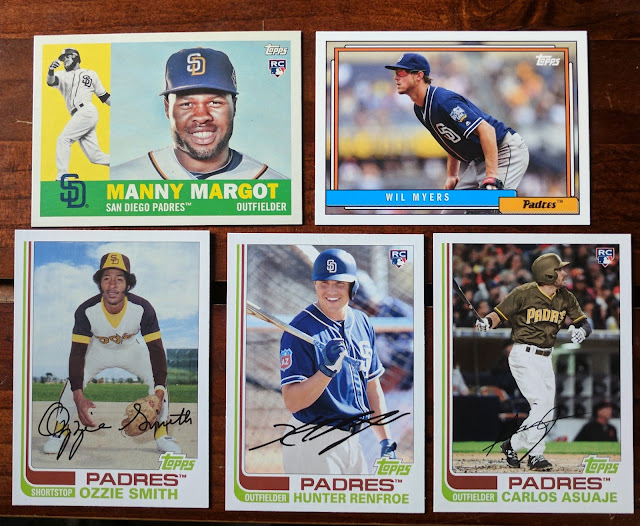 Looks like I got the full Padres base team set from this one box.. nice. Always love to see the Wizard in the mustard as opposed to the ketchup. A notable absence this year is Tony Gwynn.. perhaps Topps let the contract with his estate lapse? (There are also no Griffey cards in the product. No Willie Mays either.) 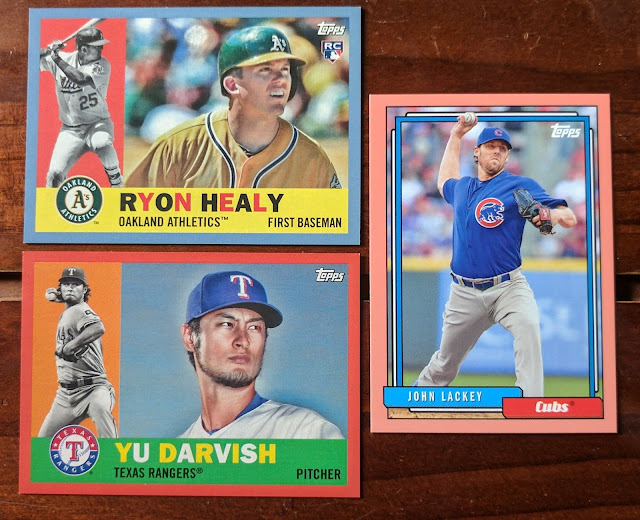 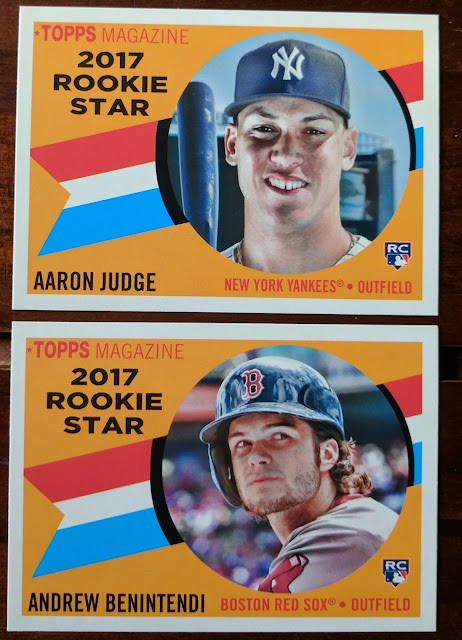 Unlike in 1960 Topps, these Rookie Star cards are an insert set, not a subset. Can't do much better than these 2 names. 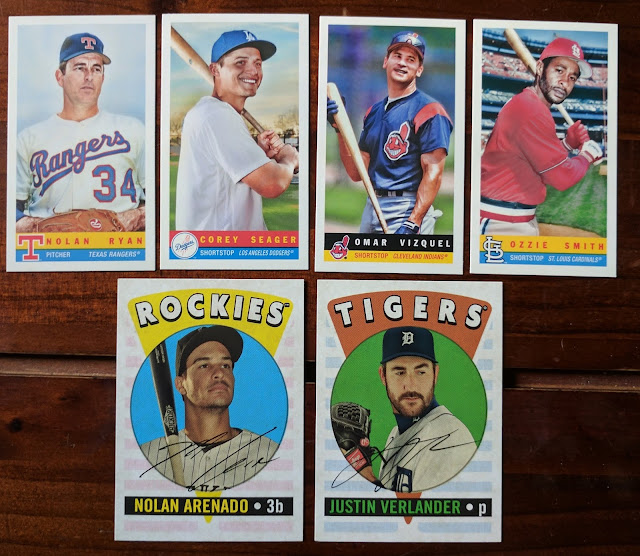 Some more inserts. These are fine, though not super exciting. I feel like Topps has used that Arenado photo on like 50 different cards already. 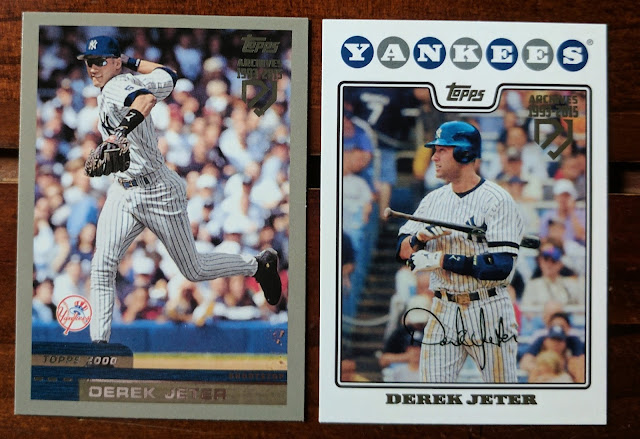 Looks like these Jeter retrospective reprints are 2 per box. 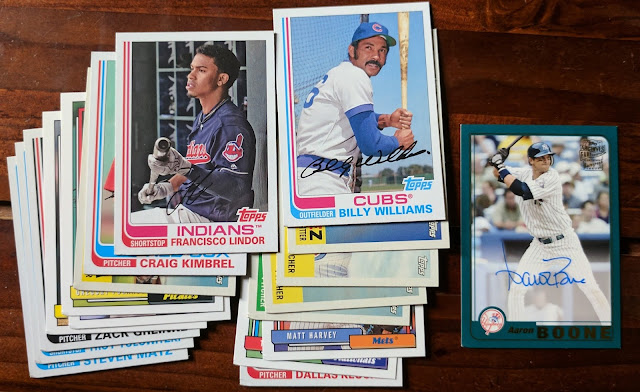 Bummer time! Check the lower left corner of these cards. Ding City! The box got a bit crunched and damaged several cards, including the first auto. This wasn't Topps' fault, but rather Blowout Cards. In the past, I've bought my boxes from Dave & Adam's Card World. This year, I switched over to Blowout since their prices were a couple bucks cheaper. But man, I think I might rather pay a little extra to get the boxes shipped safely with bubble wrap rather than the boxes crammed into a tight shipping box without any extra protection. Sad to see an auto among the victims. Thankfully it wasn't anything awesome like a Hank Aaron auto or something. But still, I kinda like Aaron Boone thanks to the Boone Family being from my neck of the woods (East County San Diego). So yeah, bummer it's damaged. 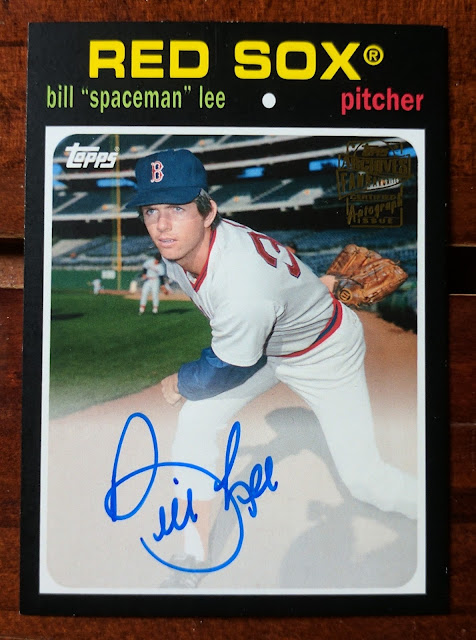 My other promised auto had me sweating, as it wasn't pulled until the final pack. I was pretty happy with this Bill Lee auto. Not exactly a "big money" pull, but he's a neat character and a guy I collect.

In all, a pretty solid box despite the several damaged cards. 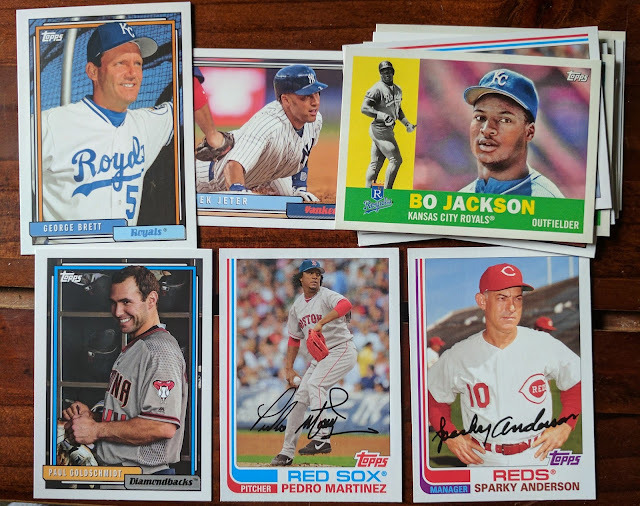 Glad to see the collation is better this year. After my two Archives boxes last year had nearly identical base cards in them, it was a relief to get plenty of cards in Box 2 that I didn't pull in Box 1.

There were several dupes, however, but not an obscene amount. The above 3 dupes were actually nice for me to pull, since these are the only "guys I collect" that were among the damaged cards from Box 1. So really the only casualty there for me was the Aaron Boone auto. 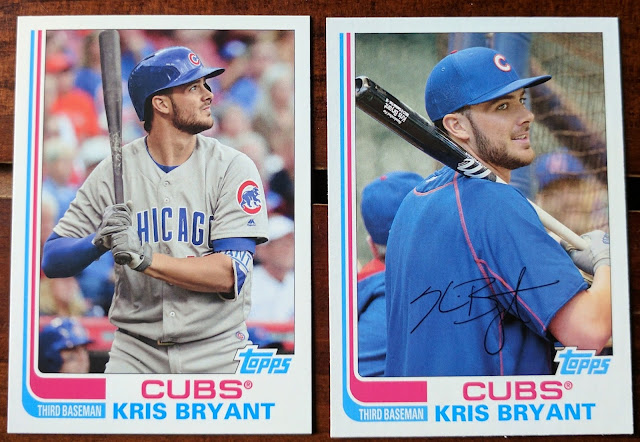 One key guy I didn't pull in Box 1 was Kris Bryant. Imagine my surprise to pull not one but two of his cards in Box 2. Turns out the grey uniform card is a photo variation. A look on eBay tells me these are selling for over $30, so that's pretty cool. Topps did setbuilders a solid this year by axing a SP section at the end of the set that vexed collectors who worked on completing previous Archives sets. Instead, there are some short-printed photo variations.. which you can choose to fuss with if you want to, or just ignore them and everything will be fine without worrying about "missing numbers." I think that's a good compromise for Topps to give hit-chasers something extra to chase without screwing set builders. I went through the trouble of checking the production code on every card I pulled (which is the easiest way to tell if it's a variant [it will end in 799]), and unless I missed one (again, the tiny text on the 1982 backs is very hard to read) this Bryant was the only one I pulled from either box. 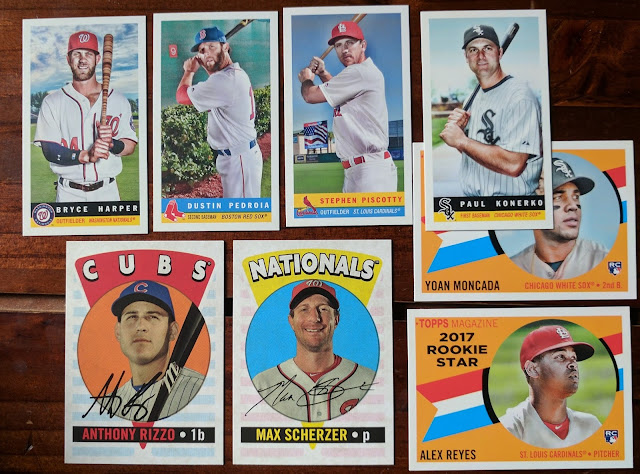 The inserts in this box were highlighted for me by Bryce and Rizzo. 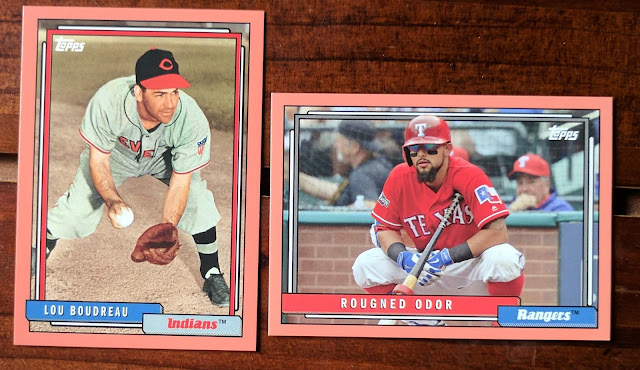 While the first box had some nice parallels, the second box was lacking in that department, with only a couple peaches (/199). 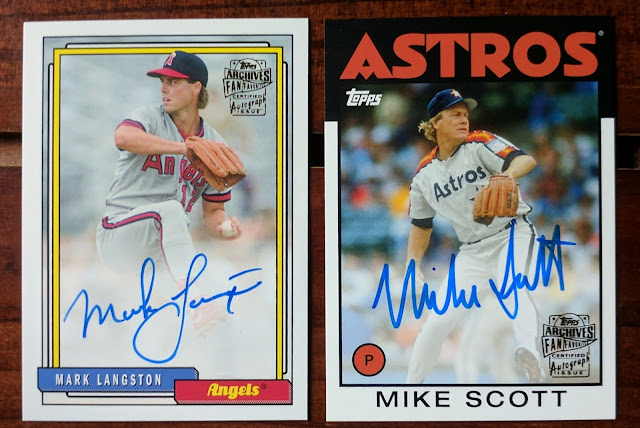 My autos in this box were a couple pitchers who had solid careers. While not amazing pulls (my mojo last year of pulling a 1/1 Griffey auto did not carry over into 2017) I suppose I like 'em alright. I remember Mark Langston fondly from his one season spent in San Diego, even if his numbers weren't great, but it was that magical 1998 season when they managed to make it to the World Series. As for Mike Scott, well, I remember one of the few vintage cards I owned as a kid was his multi-player rookie from 1980 Topps, for whatever that's worth. So could be worse than these guys. Hell, I'm just relieved I didn't pull a Skip Bayless auto, or that annoying foul ball guy or any jokers like that. 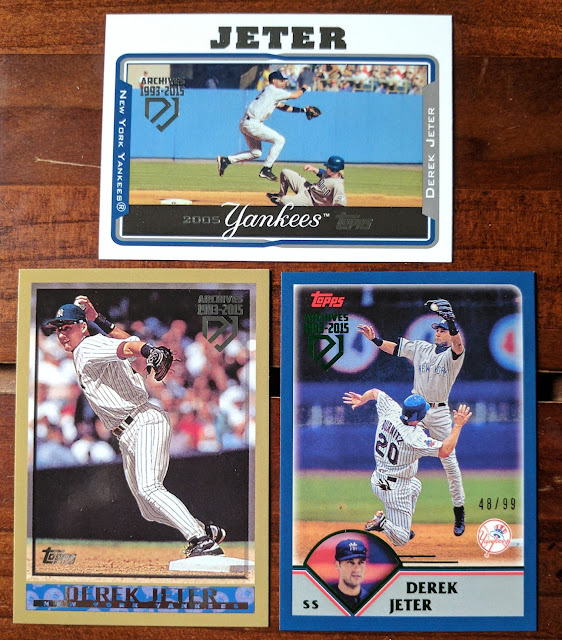 Besides the Bryant photo variation, the real star of this box was Derek Jeter. In addition to a couple base reprints, I also hit a green foil parallel #'d 48/99. If I wasn't so lazy, I should throw that on eBay to try to recoup a few bucks. But I'll probably end up hanging onto it.
One other thing to note is that the autos and the Jeter reprints seem to be on the old Archives card stock, noticeably less hefty.

So there you have it. A decent pair of boxes. Probably didn't quite recoup my purchase price, value-wise, but I wouldn't call them complete duds either, thanks largely to the solid pulls of the Bryant variation and Jeter parallel. All told, while somewhat on the fence, I think I enjoyed these boxes enough to keep my tradition going and tentatively plan on picking up a couple boxes of 2018 Archives next year.

Now I've got a couple big stacks of tradeables, so if any of my trading pals are looking for any base cards, let me know. And I'm sure of bunch of these will make their way into the 1,000 card prize package I'm putting together.

Oh hey, great response to my 1,000 Posts contest! Go join in if you haven't yet.

Bonus entry opportunity: The Darvish red parallel was the lowest numbered card in either box, /25. Sadly, not a Christmas Card, but still cool. Be the first person in the comments below to correctly guess the serial number and you'll get a bonus entry for the contest. (Update: congrats to gcrl on his accurate guess of 20/25)

Update: here's the backs I was talking about. Notice the McGwire stats start at 1989. Meanwhile, Billy Williams' back crams in a bunch of wonderful tiny stats: 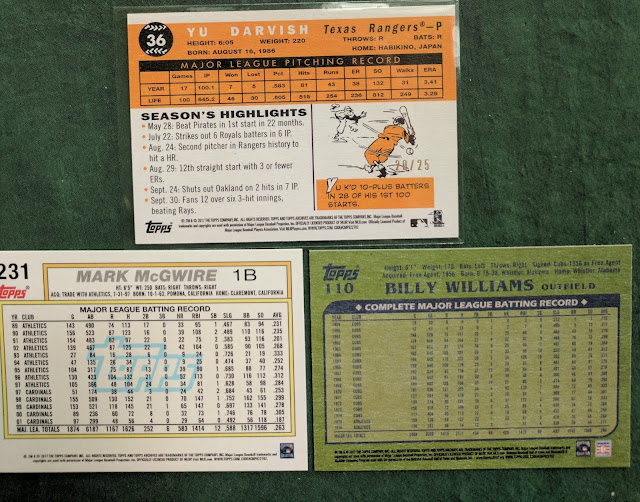