Three trades arrived in the past week or so. Let's take a look.

First up is from Jeffery a.k.a. The Turrdog. He was the only contestant in my Big Fun Game I wasn't familiar with. Turns out he's a pretty cool guy and sent me a nice "thank you" package even before his prize arrived! 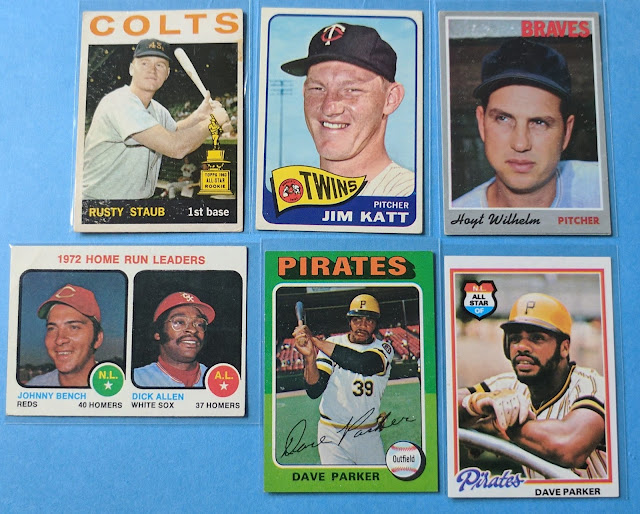 Kicking off with some tasty vintage, here's a Rusty Staub I needed for my '64 Topps setbuild. And the Jim Katt (sic) is a nice upgrade over the "tape stains on the corners" copy I previously had in my '65 Topps setbuild. The rest are sharp upgrades for PCs. 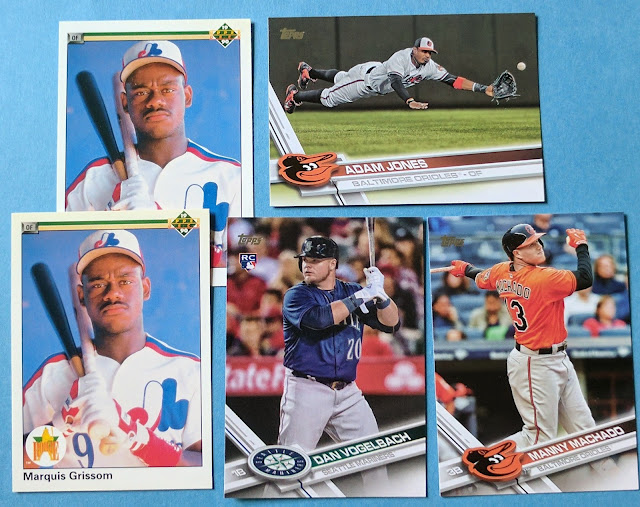 Jeff also hit some more modern needs of mine, including a couple for my Marquis Mania project, and my first real card of the Vogelmoster in his new Mariners duds.

Thanks a lot, man! Very appreciated. Glad to hear you're happy with your prize and the bonus cards I sent. (Turns out he's a big Mattingly collector, so I gave him a bunch of Mattingly customs in addition to the Andre Dawson auto he came away with in the game.)

Next up is another package from a happy Big Fun Game player. (I definitely don't want anyone who won a prize to feel obligated to send me anything in return, though I'm obviously not going to turn down cards! haha) This time Brian from Highly Subjective and Completely Arbitrary hooked me up with some good stuff. 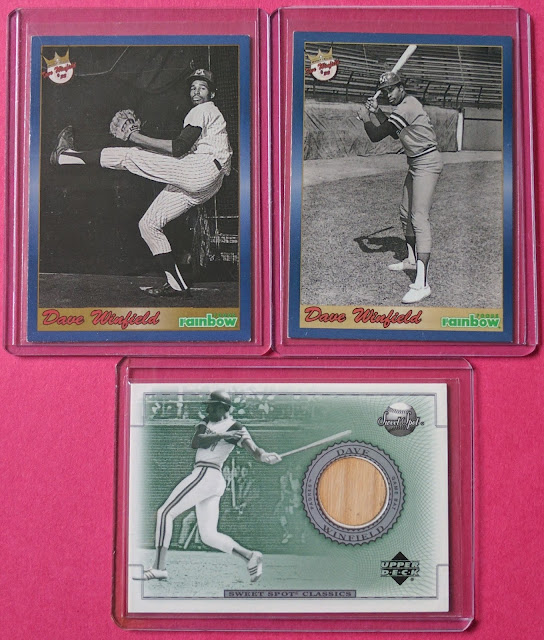 Awesome trio of Dave Winfield cards, including a couple oddballs featuring photos from his amateur days as a two-way player, plus a sweet bat chip with him in his Padres uniform. 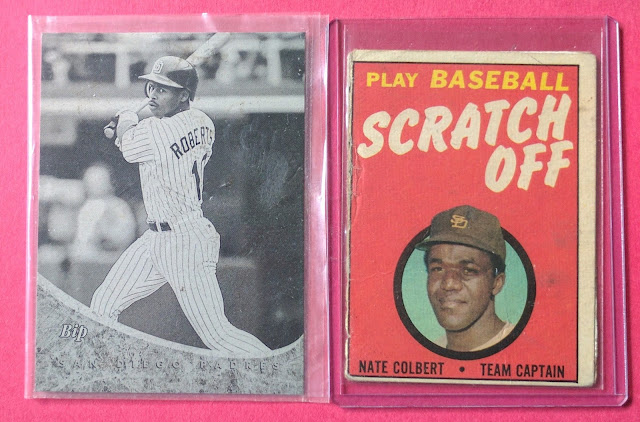 Speaking of oddballs and Padres, these are cool. Brian, could you shed some light on that Bip? It seems to be a thin piece of metal, similar to a printing plate, but it's a bit oversized and blank on the back. Well, whatever it is, it's a welcomed addition to my Bip PC. (Update: apparently a backdoored black printing plate from 1994 Leaf. NICE!) The Nate Colbert scratch off is aces, as well! 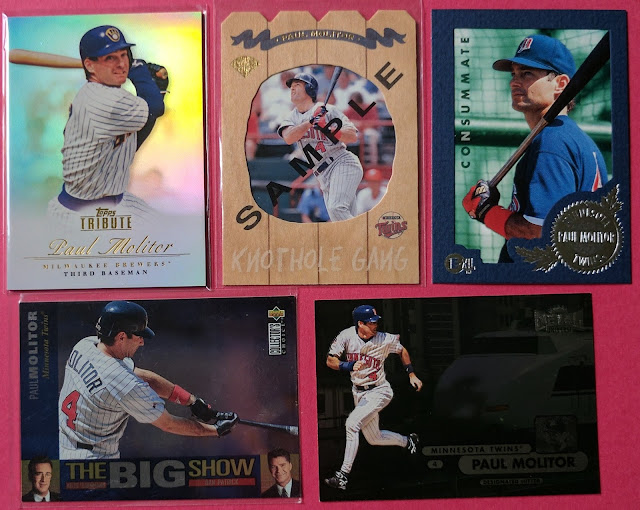 Now onto the Paul Molitor portion of the post. Nonchalantly snuck into my Molitor PC post was the announcement for the Big Fun Game, but the other take away from that post was I was just a handful of cards away from my goal of having 100 different Paul Molitor cards. Brian answered the call and dug up several dupes from his collection he could share with me. Some great stuff here! 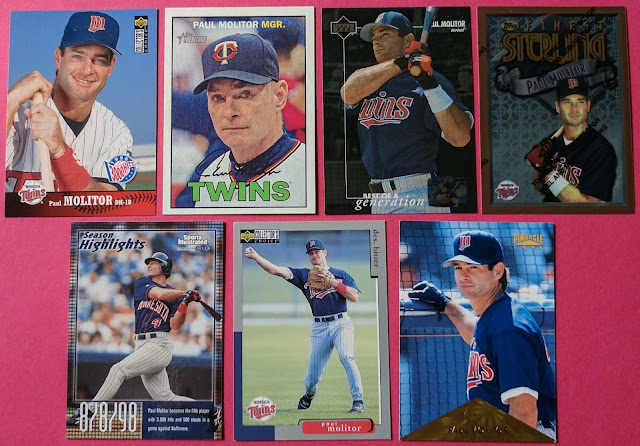 And more! Thanks so much, Brian! Hopefully by the time you read this, you'll have received the Tony Oliva auto you snagged in the game, plus the healthy dose of bonus Twins I threw in. And hopefully there are a few needs in there for ya.

But credit where's it's due, the trader who gets the props for getting Molly into my Hundred Card Club is ol' Johnny Miller who quickly shot me over a couple PWEs. 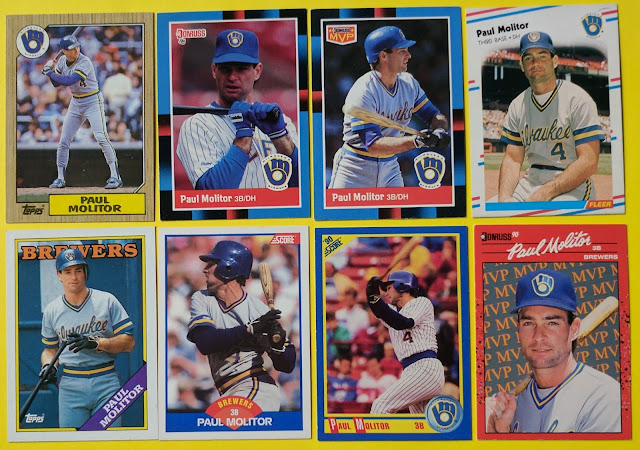 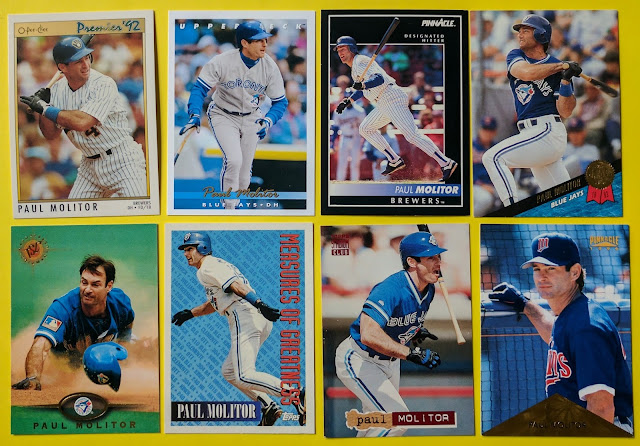 John and Brian only overlapped on one card, the Pinnacle with the gold pyramid bottom. No coincidence it's the only Twins-era card from John, I'm sure. So yeah, the PC is now comfortably over 100 cards, giving me some sense of accomplishment there.

Big thanks, John! I feel bad because he's sent me like 4 or 5 card mailings since the last one I sent him. But rest assured, I'm almost done with that project I've been working on for him, and will be sure to go big with a return package to balance the scales soon.

And speaking of mailings, I mailed out BFG prize packages today for Matt Prigge and Corky. That means I'm still just working on the packages for Nick, Bo, Wes, and John. Soon!

Well, thanks for reading and have a great near-holiday weekend!