Waiting Til Next Year snuck in a little contest within a post a couple weeks ago where the first to solve a math problem got a cardboard surprise. I noticed nobody had submitted an answer yet, so I set off to solve the equation. After several minutes of working on it, I couldn't get the numbers to work out, but I gave the closest answer I could come up with. Turns out Tom flubbed the numbers a little in the question, leading to the problem not working out as presented. But hey, I still got a prize for my effort! A nice one, too! 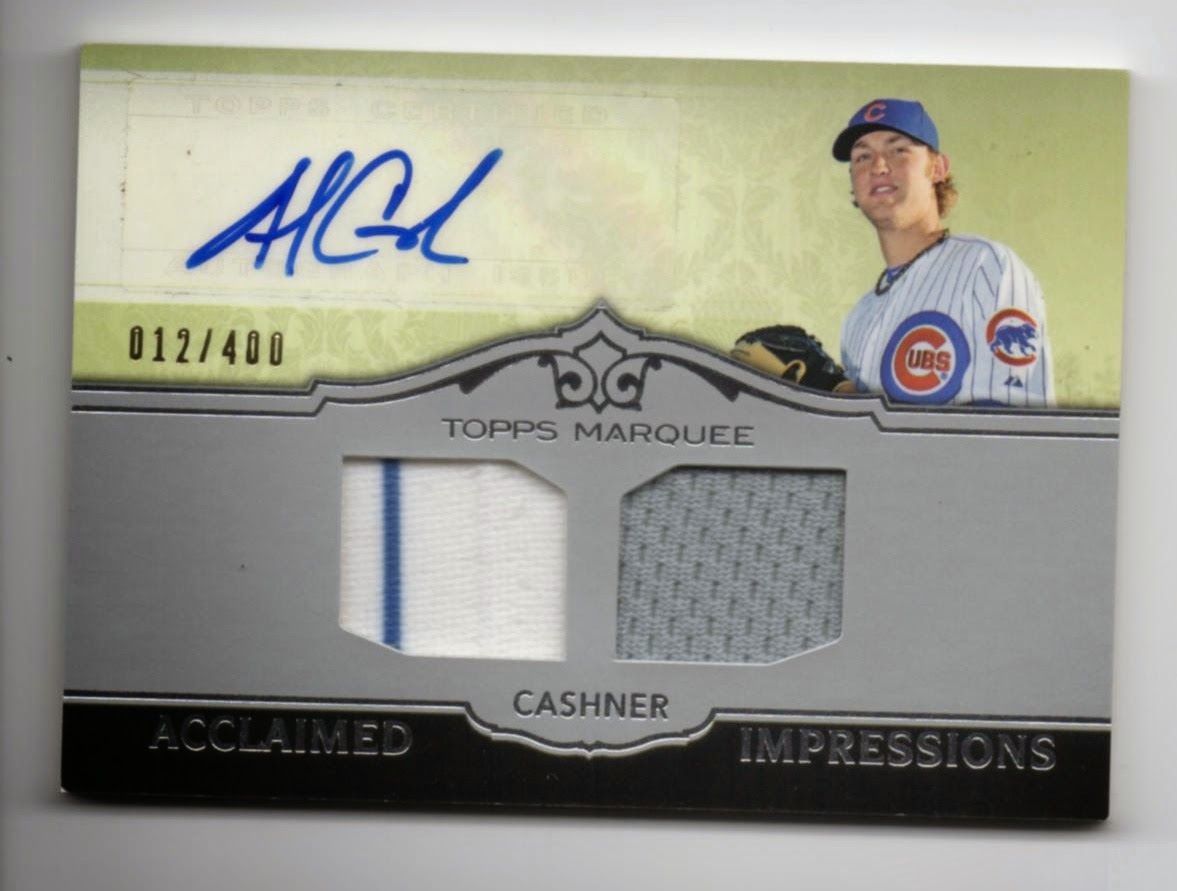 Cash Money! I've got a decent collection of Andrew Cashner cards going now (my Cashner Cache, as I like to call it), and this is definitely among the cream of the crop, boasting an autograph, serial number, and not 1 but 2 swatches of material from a uniform that the man may have worn in a game back in his clean-shaven days as a Cub. The rumors that he's on the trading block make me sad. He's really the only current Friar I actively collect. Honorable mention to Jedd Gyorko, but after that, I'm pretty indifferent to the rest of the roster, to be honest. Kind of sad to say that about "my team." So yeah, I hope he sticks around in San Diego.

Thanks again for the great card, Tom!

Next, I swung a quick trade with Roger at Sportscard Mask-a-Rade. He posted about updating his trade bait, so I took a look and found some interesting cards I wouldn't mind clutching tightly in my clammy grasp. Rog gave me a great deal, only asking for a couple relics I picked up cheaply as trade bait at the last card show. Doing the math on this trade (keeping with the loose theme of this post), I definitely got the better end of the deal by at least a ratio of 2:1, so I'll need to balance the numbers next time we trade.

These 3 Mickey Mantle World Series commemorative pins medallions are really nice! Manufactured relic-type cards fall into the category of cards I love receiving in trades, but have no interest in purchasing myself. Apparently a 3-card set with one each as an exclusive bonus with Target factory sets of 2011 Topps, these are great additions to my Mick collection.

But my main interest was this Fleer/SI Greats of the Game auto: 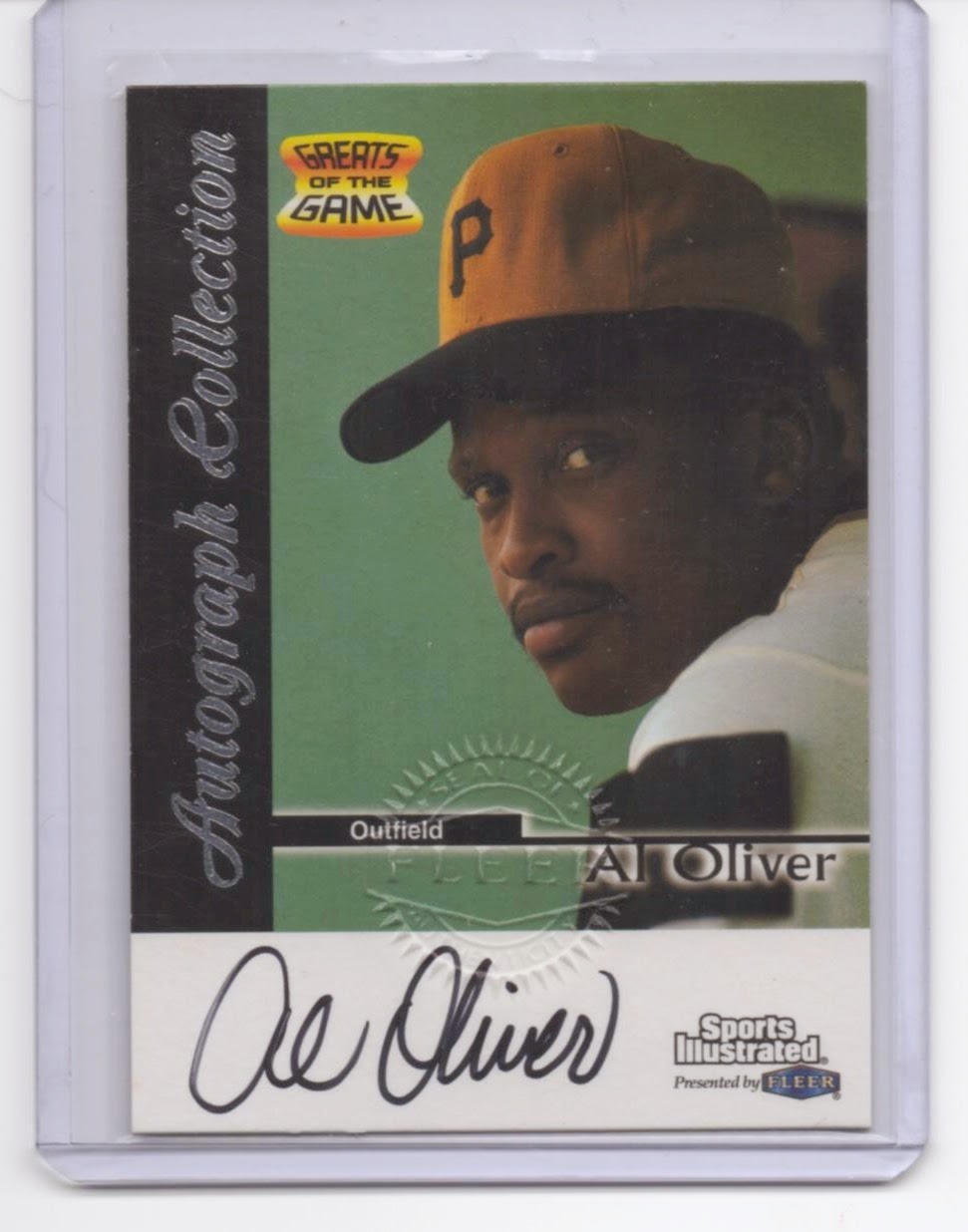 Love Al Oliver! Thanks again for the awesome trade, Roger! Seems landing decent Pirates cards on the 'sphere these days is tricky, with at least 3 active bloggers being big Bucco collectors.. most prominent of which likely being Matthew Scott at Bob Walk The Plank.

Speaking of Matt, I got a surprise from him in my mailbox yesterday, too... 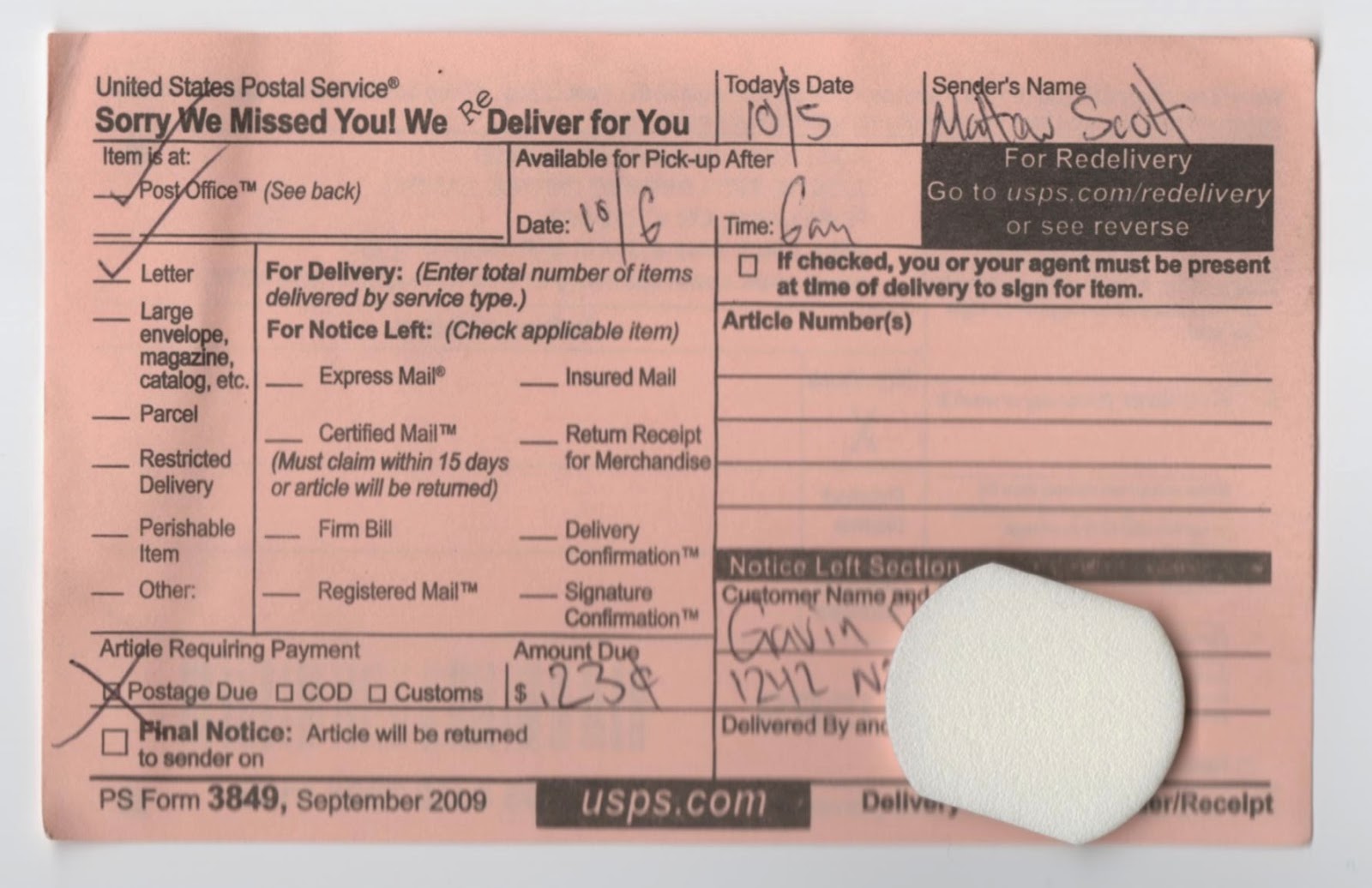 How bittersweet! A surprise mailing from Matt (yay!!) but I have to stand in line and interact with the surly pricks behind the counter at my local post office to get it (boo!!). A postal worker somewhere did the math on Matt's PWE and came up with a solution of -23. Twenty-three lousy cents due. Grr. I believe the last package Matt sent me was also marked that much postage due, but that time the postman was cool and delivered it as normal anyways. Not so lucky this time. (And I'm just now noticing the mailman dated this October instead of November.. derp. I hope that doesn't complicate matters further with the a-holes at my post office.) I'm tempted to be a dick and pay with a credit card, since I know they have to pay a fee for each transaction.. but nah, I'll just scrape up a couple dimes and 3 pennies. Hey, there's math rearing its head again!

But anyways, thanks in advance, Matt!! Looking forward to the mystery card(s) awaiting me behind enemy lines! And thanks again to P-town Tom and Roger.
Posted by defgav at 3:41 PM