This week on Wilhelm Wednesday we're checking out pairs of similar looking cards. So get ready to fill your eyes with that double vision. 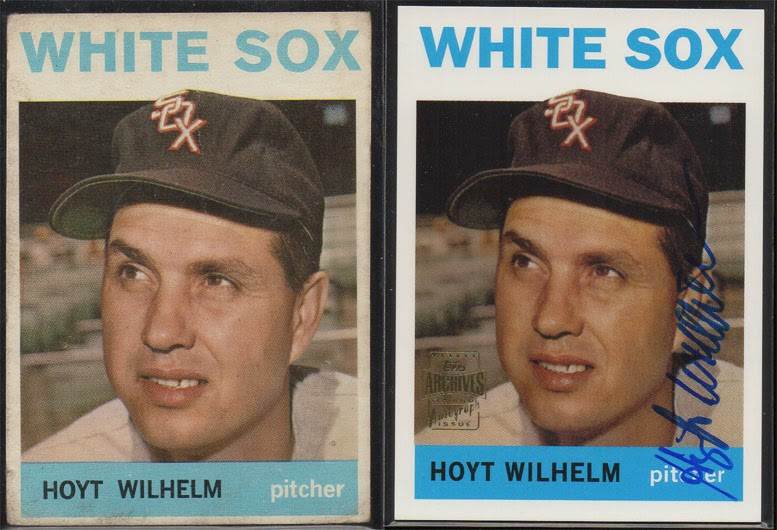 A duo of 64 Topps. Well, one is a vintage real-deal, and one is a reprint certified auto from 2002 Archives. Doesn't seem like the best card to choose for an auto reprint, but whatever. Love 'em both. That vintage 64 is my latest Hoyt addition, picking it up just recently in a Listia shopping spree which I'll post more about soon.

This next pair isn't as obvious at first glance. 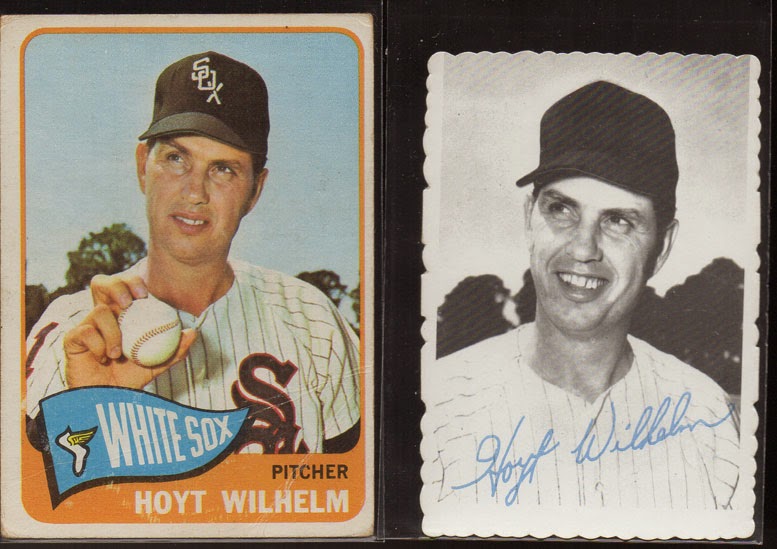 I've shown both these off in card show recaps back when I picked them up, but it recently hit me that these two photos are from the same shoot. The deckle edge is from 1969, which is a notorious year for Topps digging up old photos. I'm no expert, but I believe there was a contract dispute or something that prevented Topps from acquiring new photos, so collectors of the time were left with old shots of guys, with lots of airbrushing and/or no hats. It wasn't till the high numbers did they start mixing in some recent photographs. But yeah, Topps reached back several years for this old-school die cut, likely being from spring training 1964. After the 1968 season, Hoyt was drafted by the expansion Royals, then traded to the Angels a couple months later. Topps must have given up on trying to airbrush him into the appropriate uniform, so he's clothed in a nondescript baseball outfit here.

Here's a gif I whipped up morphing the 2 photos together.

In another curiously dumb move, Topps made two #11 cards in that deckle edge set, so Hoyt shares a number with Jim Wynn's card in the checklist.

Now let's close out with Hoyt's 1952 Topps rookie card. Sadly, I don't owe one of these. It's a scare high number, and even a pisspoor condition specimen will run you over a couple hundred smackers. But this ain't no iconic 52 Mickey Mantle work of art; Nope, Wilhelm's card is actually pretty ugly! (I don't own this card:)

He's slacked-jawed and got his eyes closed. This is the best Topps could come up with for his card?? (I considered photoshopping his eyes open for fun, but it would no doubt turn out very creepy.) Sure, I'd love to add one to my HW PC someday, but it's hard to justify shelling out so much money for such an unattractive card. 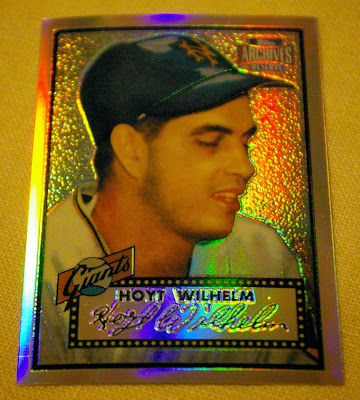 Plucked this out of my 2001 Archives Reserve setbuild (closing in on completion of that 100-card set!). It still might not be a great looking card, but at least it's all rainbow-shiny and cost me less than a buck.

Hoyt had an incredible rookie campaign in 1952, by the way, leading the NL in ERA, ERA+, games pitched, and winning percentage, with a 15-3 record. He was runner up to Joe Black for ROY, and came in 4th in MVP voting.

That's it for today's Wilhelm Wednesday. See ya next week.
Posted by defgav at 3:29 PM