I mentioned the other day that my job got extended. I got the word about that on Halloween, and that evening I celebrated with some candy (we didn't get much trick-or-treater action), a couple drinks, and a little shopping spree with a lucky seller on eBay, taking advantage of combined shipping. Here are the cards I picked up! 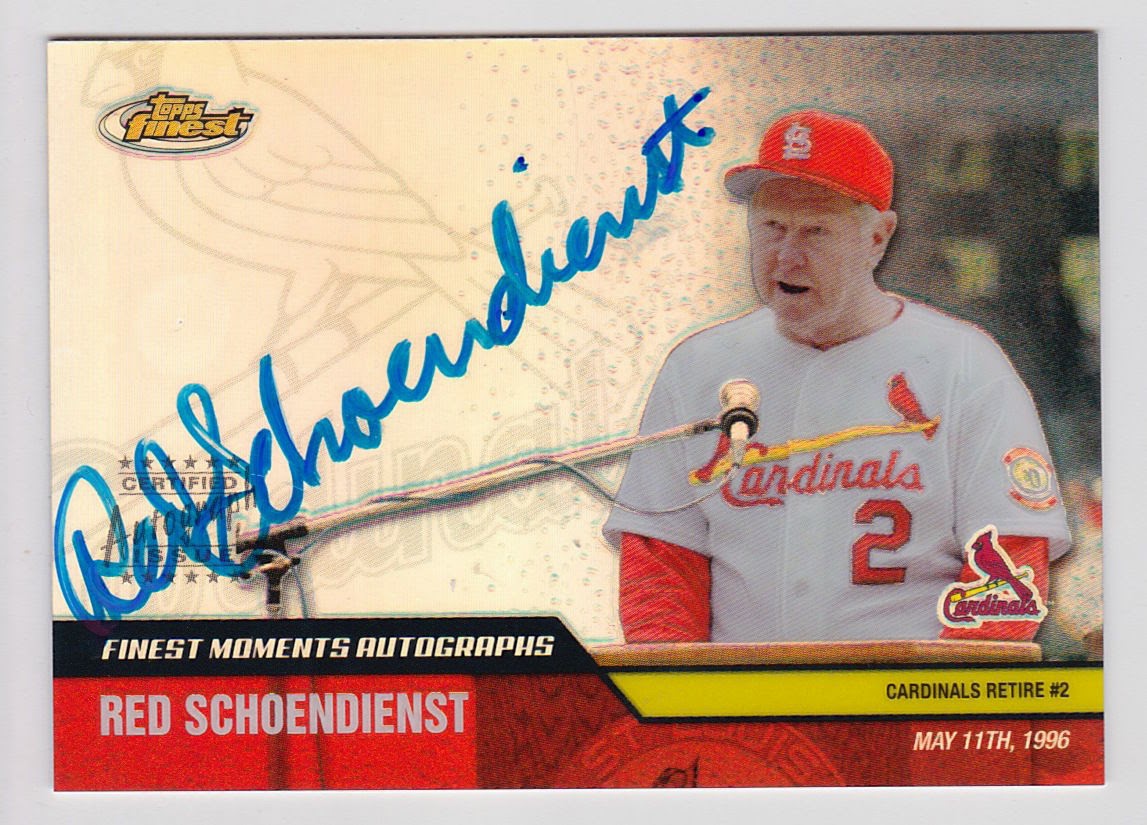 I don't know.. This doesn't exactly fit into my collection focus. But how can you be a true baseball fan and not have a soft spot for HOFer Red Schoendienst? The guy signs his name so neatly everytime! And it's a long name, too! Much love. This card is kinda funny because it looks like he's at a piano, singing a song (though of course he's really at a podium thanking the Cardinals for retiring his number-- but I don't care, I still imagine him all like, "Sing us a song, you're the piano man.. Sing us a song to-night").

Yes, this was mislisted as "Jedo" Gyorko. Return of the Jedo? I've got a decent little rainbow going for this big-cheeked card now, with (I think) 6 different cards in this design (3 autos and 3 non-autos). I had to make this one a Refraction Action, lest it look too much like a Walmart blue parallel. (In hindsight, should have taken it out of the toploader.) 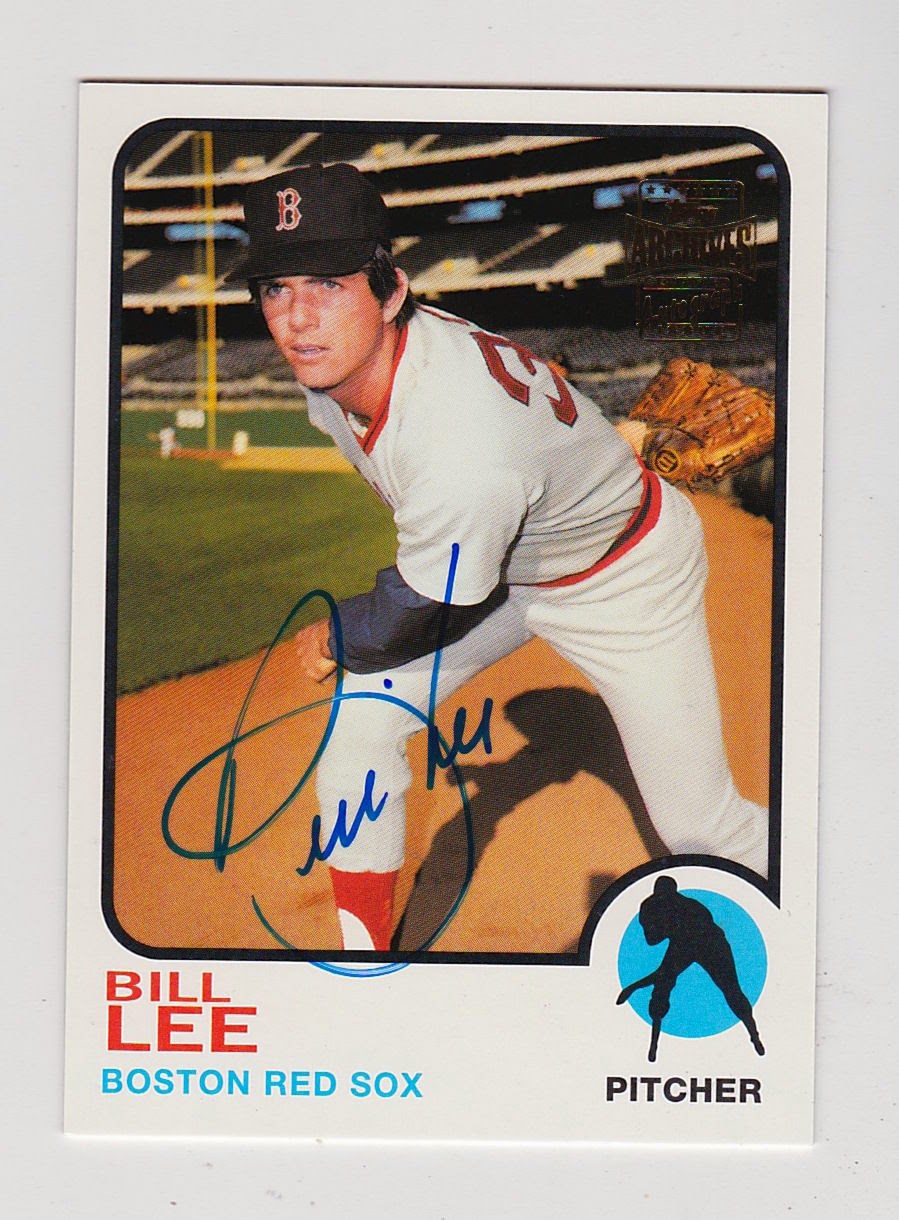 Bill Lee! Remember a while back I talked about "settling" for the 1974-style Archives auto, but pining for someday owning the 1973-style Archives auto? Well, dreams really do come true. The Bill Lee essential certified auto trifecta will be complete when I one day pick up the Fleer/Sports Illustrated auto where he's wearing a crazy spacesuit getup. 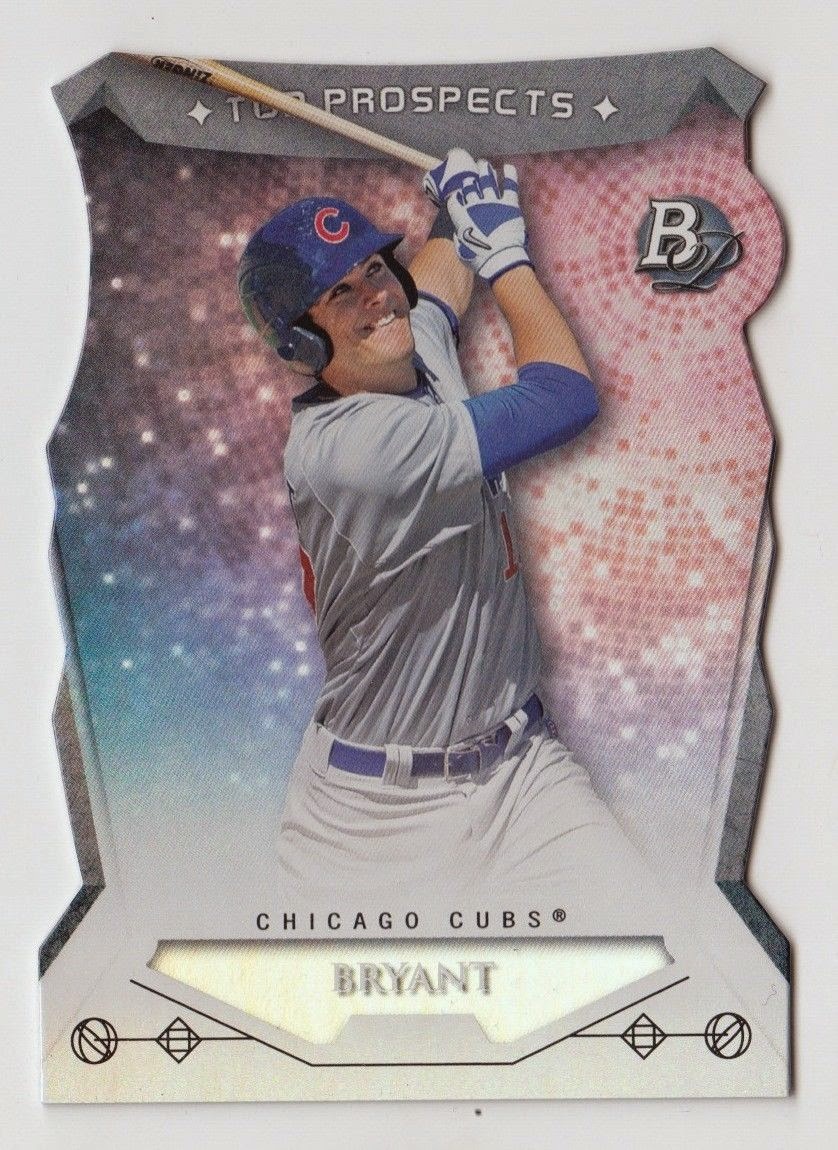 This guy is apparently gonna be the next Mike Trout, so I figured I needed to at least have one card of him. This ain't no #'d auto or anything, but still a decent card. Is he related to Kobe? No really, is he? I'm just going to assume Kris Bryant is Kobe's adopted son. Please nobody correct me. 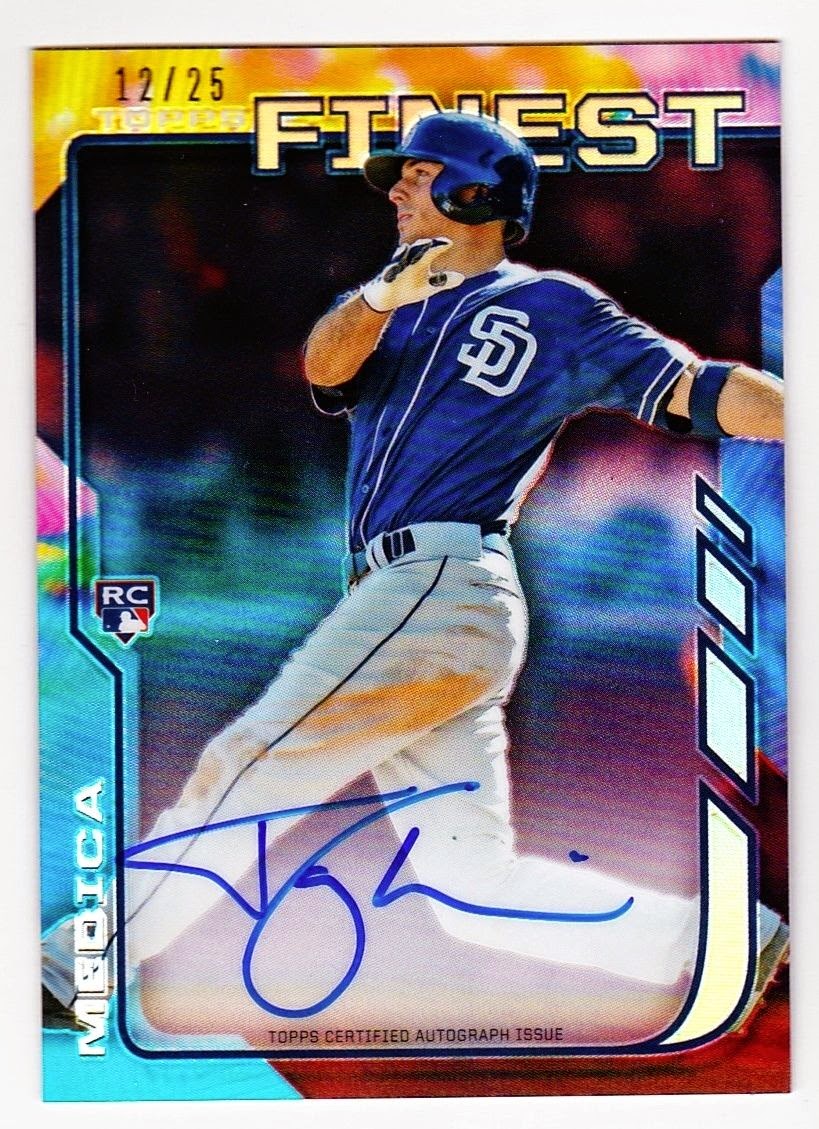 A promising young Padre! And would you look at that: Christmas Card! Sold! My first 2014 Finest card. (This was not the card that made me zero in on this particular seller, believe it or not. The card that made me check out his wares was in fact a Bob Gibson auto that I ended up not buying, funny enough. It was a great deal, but I already have a nice Gibson auto [plus another I'm looking to move], so couldn't talk myself into another one.) 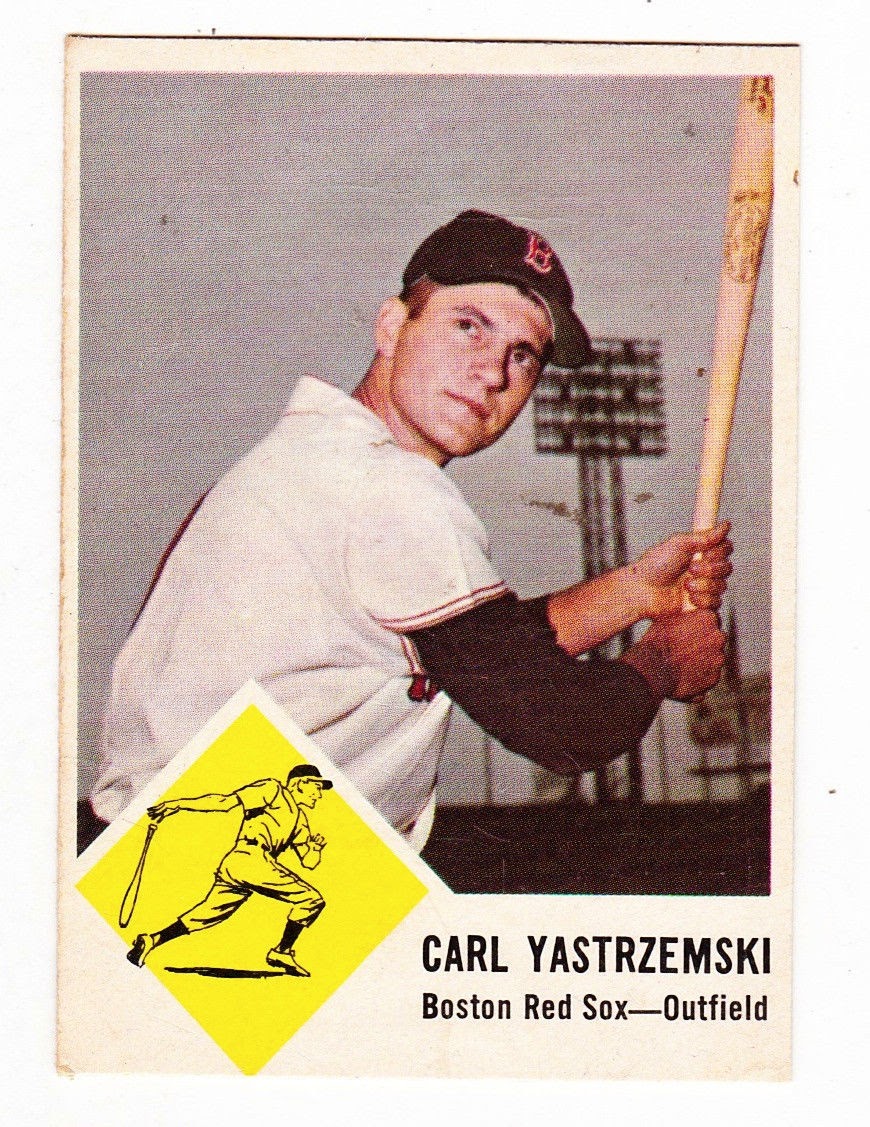 Here's the only vintage card from this spree. Love venturing away from Topps vintage once in a while. And love Yastrzemski. So this 63 Fleer Yaz is a winning combination! 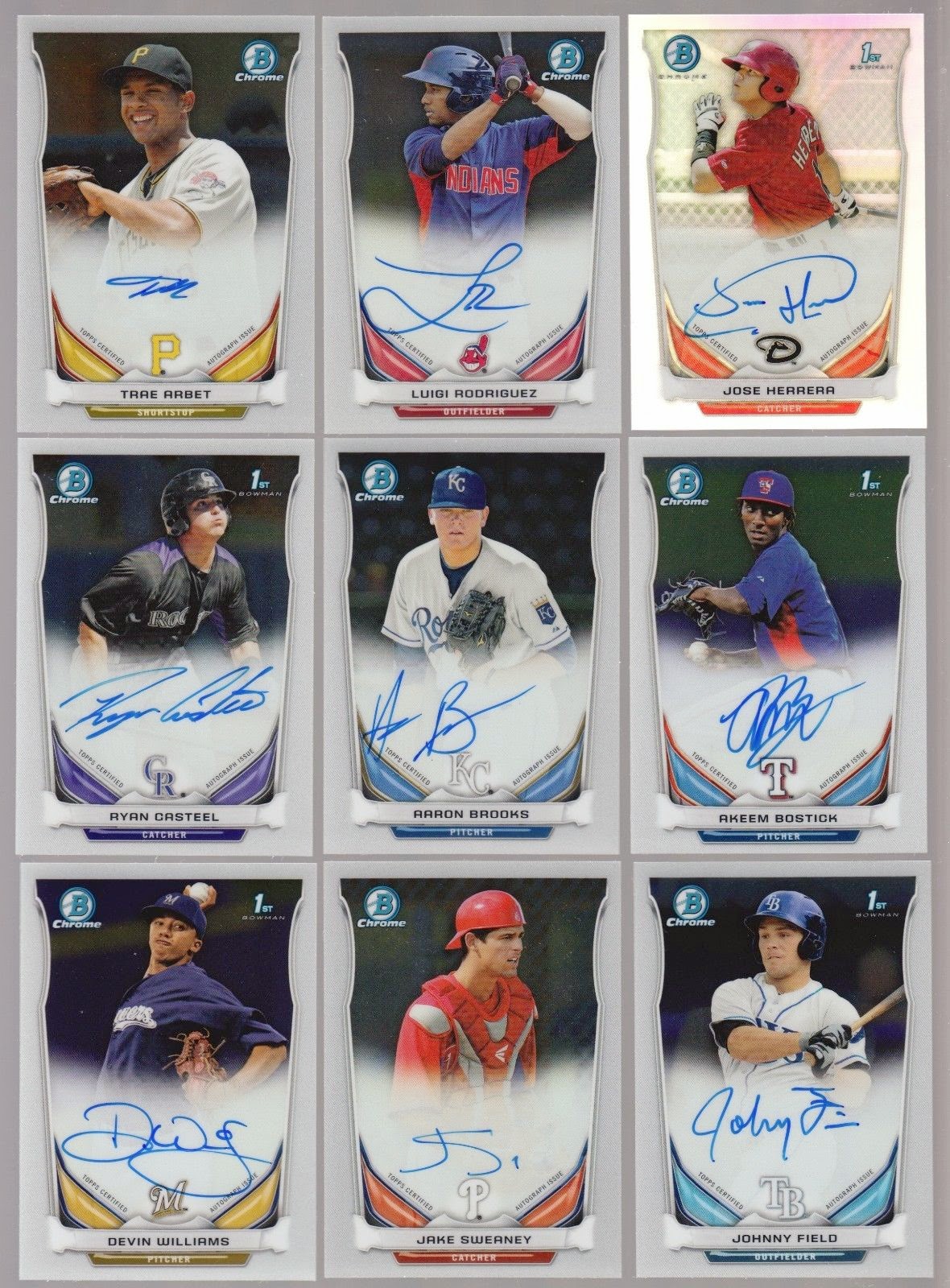 Finally, here's a 9-card lot of autos of guys I haven't heard of.. but hey, decent trade bait, at least! Seemed like a good deal, at under $1.25 per. Let me know if you want any of these 9, as they're all available in trade for other autos that might fit better in my collection. It's slow at work as I draft this, so I'll kill time doing some quick research on these 9 guys:

2) LUIGI RODRIGUEZ  #BCAP-LR [Indians]
His name is Luigi! LUUIIIIIIIIIIIIIIIIIIGI! Tempted to become a Luigi supercollector. Quick, send me all his wavy/sparkly parallels! There has never been a Luigi to play in the big leagues; he'd be the first. (Plenty of Marios, but no Luigis, go figure.) The huge L in his signature makes me think of Laverne & Shirley. Noice.
"Rodriguez, 20, is Cleveland’s No. 8 prospect [as of early 2013] [...] still gets big with his swing and needs to keep his strikeouts in check, but he’s a 70 runner with solid plate patience." (source)

3) TRAE ARBET  #BCAP-TA [Pirates]
His name is almost an anagram of "Trade bait," fittingly. Seems to be a weak hitting shortstop. He's from Temecula, CA, a town I know only from the couple times friends dragged me to a huge country & western dance club there back in the day ("the hick club" as it was known to us.. forget the real name.. wait: it was Stampede [thanks, Google]). I even rode the mechanical bull. It sucked. I'll bet Trae has never been to that club, because he's not 21 yet. Oh wait, it's 18+, so I take that back. He's got the nicest smile (and tiniest signature) of this lot, I'll give him that.

5) AARON BROOKS  #BCAP-ABR [Royals]
Brooks already cracked the major leagues.. though it was ugly: 13 earned runs in just 2.2 innings pitching for Kansas City last season. Needless to say he was not on the postseason roster. But he did well in AAA and could be a key arm for the team in the near future.

6) RYAN CASTEEL  #BCAP-RC [Rockies]
Casteel seems to have a pretty decent bat. At AA last season, he hit .280 with 16 round-trippers, splitting time between first base and catcher. It'll be interesting to see how he does in AAA next year.

7) JOHNNY FIELD  #BCAP-JF [Rays]
With a name like Johnny Field, it'd be cool if this guy were a defensive wizard.. and sure enough, he seems to be swift out in center. He had a nice 2014 in A ball, hitting an even .300 with 12 homers and 23 stolen bases. Two-thirds of his season was spent at Bowling Green. Hey, I've got grandparents-in-law in Bowling Green. Cool. I always thought that was a silly name for a city. But bowling's cool, I guess. Regardless of the color.

8) JAKE SWEANEY  #BCAP-JSW [Phillies]
Drafted as a catcher in 2013, looks like he's since moved to the outfield. Hasn't really come around offensively yet, but he's still young. He needs to work on his swing and his signature.. that's gotta be the laziest of the 9 autographs in the lot. Come on, Jake! Get it together.

9) DEVIN WILLIAMS  #BCAP-DWI [Brewers]
Second-rounder for Milwaukee in 2013. So far on his career, he's got 105 strikeouts in 101 innings with a 4.10 ERA, all in rookie league. Devin might have the best signature of the lot.. big and curvaceous. (mmm.. big and curvaceous..)


So there you go. A few new cards to celebrate the fact I've still got a job. Hurray! Got out the door with all these for comfortably under a C note. This was my last eBay purchase for a while. No-eBay November is in effect and going strong, happy to say. (UPDATE: Spoke too soon. I had to cheat thanks to a Bip plate popping up. But man, I had been keeping an eye out for Bip plates since 2014 Archives came out, so it's not like it was an impulse purchase. But yeah, back on eBay lockdown now.)
Posted by defgav at 3:52 PM