Receiving a PWE the hard way

The other day I mentioned getting a postage-due slip in the mail where there should have been a glorious PWE from the incomparable Matthew Scott. That came on Wednesday. Thursday after work, I took off to the post office to get what was rightfully mine. So now we're continuing that saga. 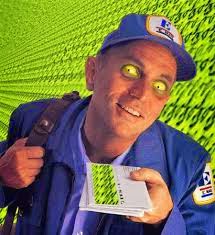 Feel free to skip down to the pictures to avoid the ranting.

Wait, first off, let me stress that Matthew Scott is the best! I'm not trying to "call him out" nor do I blame him at all. I think the situation makes for something interesting to blog about, so here we are. But again, Matt is awesome to trade with. My bitching is directed solely at my particular local post office, whom I've grown to loathe since moving here last February.

It's weird that Matt's mailings to me have twice now run into trouble. I don't think he has a similar problem with anyone else, and apart from a Listia win a few months ago, I haven't had any other postage-due problems. I'm not sure where in processing the postage-due is assessed. His post office? My post office? Some sorting facility in between? I've received mailings in the past just fine that were obviously under-postaged, so I'm not convinced it's my post office that is a stickler, but who knows.

So anyways, Thursday after work I grabbed a pocketful of change and headed out to the post office. I pretty much always walk my dog over with me. It's about a mile or so each way; a nice walk through a quiet neighborhood with lots of things for her to sniff and pee on.

I was particularly anxious this afternoon because when I got home and hopped on the internet for a minute, I discovered it was sitewide freeleech at the place I get all my music from. This likely doesn't mean anything to you if you don't torrent, but for me it was like SuperMegaChristmas for my music collection. Gigs upon gigs of mp3s for my hungry ears to feast on! It's been like 2 or 3 years since the last freeleech, so it was long overdue and I had tons of stuff on my list to grab. And it only lasts for a couple days, with the optimal time to go at it being ASAP. So the point of this paragraph is to convey how it was a very anxious walk for me; trying to be as efficient as possible at exercising my dog and picking up my letter.

I get there, tie up Annie at the usual spot, and go inside. There's a line out the door (not the door outside, but the inside door to the counter area that gets locked after business hours) and literally no one behind the counter. After a few minutes, I started suspecting I was being Punk'd or something. If I had a smartphone, I would have taken a picture. Eventually one of the workers moseys out and slowly deals a customer. Next up is an old guy trying to pick up something he got a delivery slip for that day which stated he should pick it up the following day. People often do that. The guy behind the counter decided to help out the old guy (at the expense of the dozen other people waiting in line) and try to hunt down the package. More minutes pass. Then the package is found and more minutes pass as they leisurely go through the bureaucracy (gone are the days of glancing at the guy's ID and giving him the package.. now there's gotta be data entry and receipts and things signed off on.) So it's been like 10 minutes and the line has moved literally less than a foot. The sun's going down and I'm getting nervous about leaving my dog unattended out of sight for too long, so I mutter "fuck this" and step out of line to head home, leaving unfinished business for another day.

Friday after work. I get home and my wife had gotten home early and taken the dog to the park. My (shitty) post office is closed on Saturday (and of course Sunday), so it's now-or-never for getting my mail. I hop back on my bike and head out to the post office again.

This time the line is still long, but not quite out the door. There are 2 tellers behind the counter, and at least I don't have the anxiety of my dog being stolen or missing out on prime freeleeching time overtaking me. The two tellers were apparently just faking me out and it quickly becomes zero. It's a very long wait and the guy ahead of me is vocal is his disbelieve ("Is this a joke?") There was-- honest to god-- a USPS letter carrier at the counter, dealing with some crap. Like, it was a postman collecting his paycheck by waiting in line for the post office workers to pay him. I had never seen that shit before. They can't keep the bureaucratic BS in-house??? They gotta take up the time of a behind-the-counter worker on it? It seriously took the letter carrier like 15 minutes to get his cash and leave.

Anyways, a half-hour-that-I'll-never-get-back later, I finally get to the counter and give the dude the slip, my ID, and the 23 cents change all at once, nearly blowing his mind with my speed and efficiency. And finally, a couple minutes later, the deed is done. And the lazyasses didn't even bother canceling the stamps Matt used. (I'm tempted to reuse the package for someone else. but no, I would never commit such a criminal offense because that would be wrong and I respect the postal service so fucking much. WINK WINK)

And after all that, what's in the package? Only fr*ckin' this: 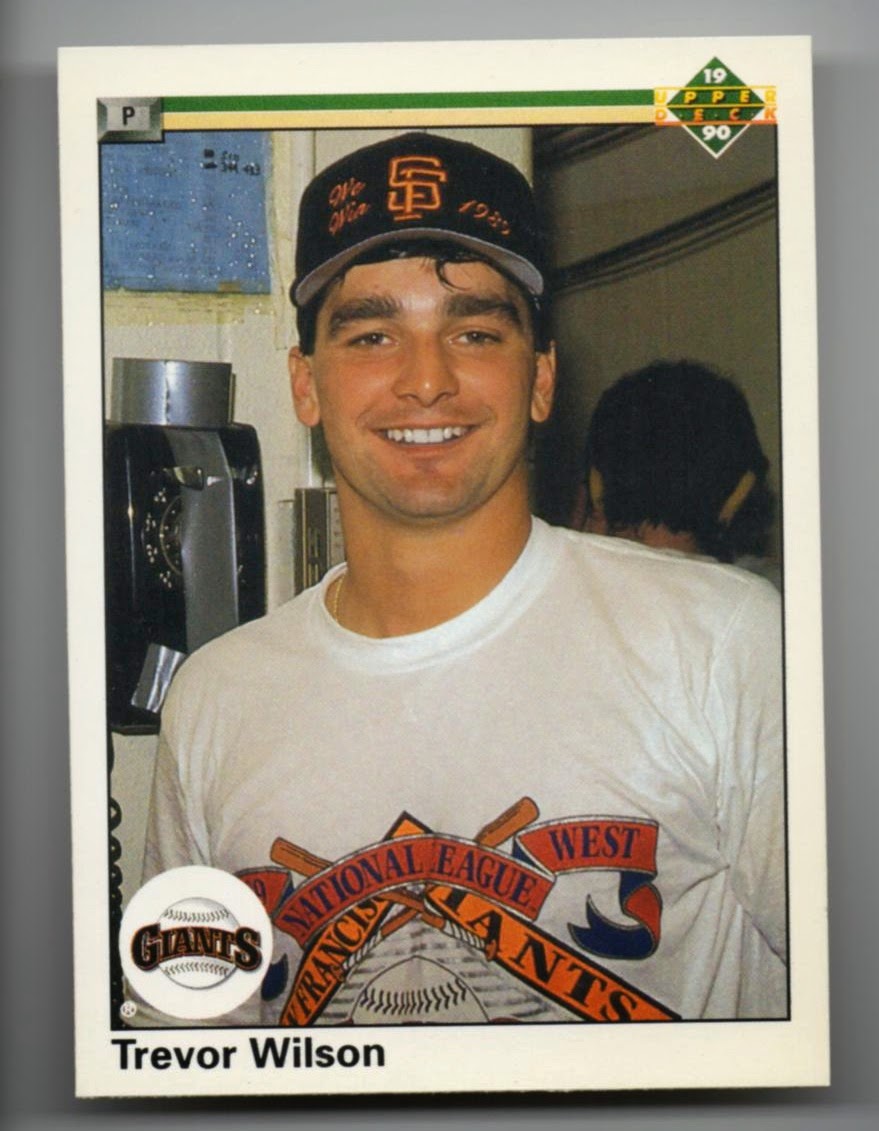 ARE YOU FR*CKING KIDDING ME, MATT?? ARE YOU FOR REAL?? IS THIS A GAME TO YOU?? DO YOU THINK THIS IS A JOKE?? I HATE THE GIANTS AND THEIR POSTSEASON SUCCESS!! BOB WALKKKKKK!!!!

Nah, I'm just kidding. That wasn't the card Matt sent. Just my dumb sense of humor, sorry. Actually the mailing wasn't a "letter" as the slip stated, but rather a small bubble mailer. And it included 3 badass cards, well worth the hassle. 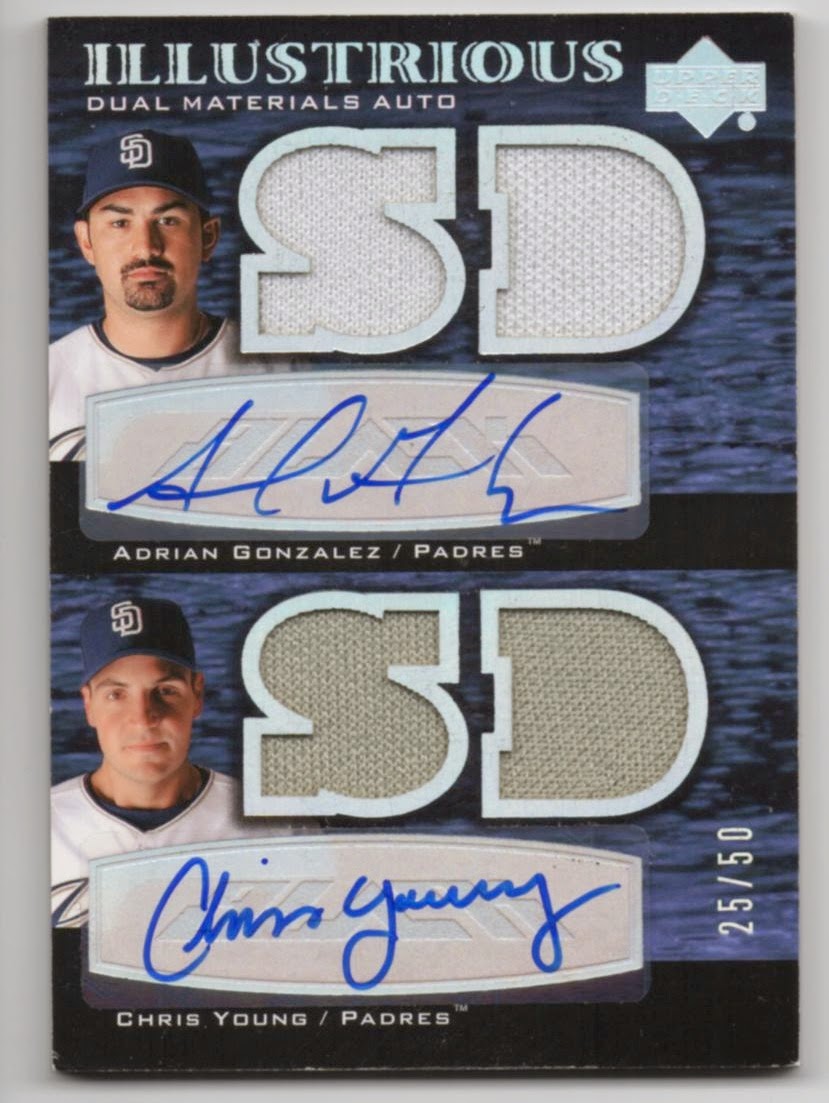 The ever-consistent Adrian Gonzalez and 2014 AL Comeback Player of the Year Chris Young dual auto/relic!! Awesome! I dropped it and dinged a corner when going to scan it (remember when I said I always play it safe and scan/photograph cards in protection? Yeah, apparently I forgot this time.) Love the card.. thanks, Matt! Also included were these: 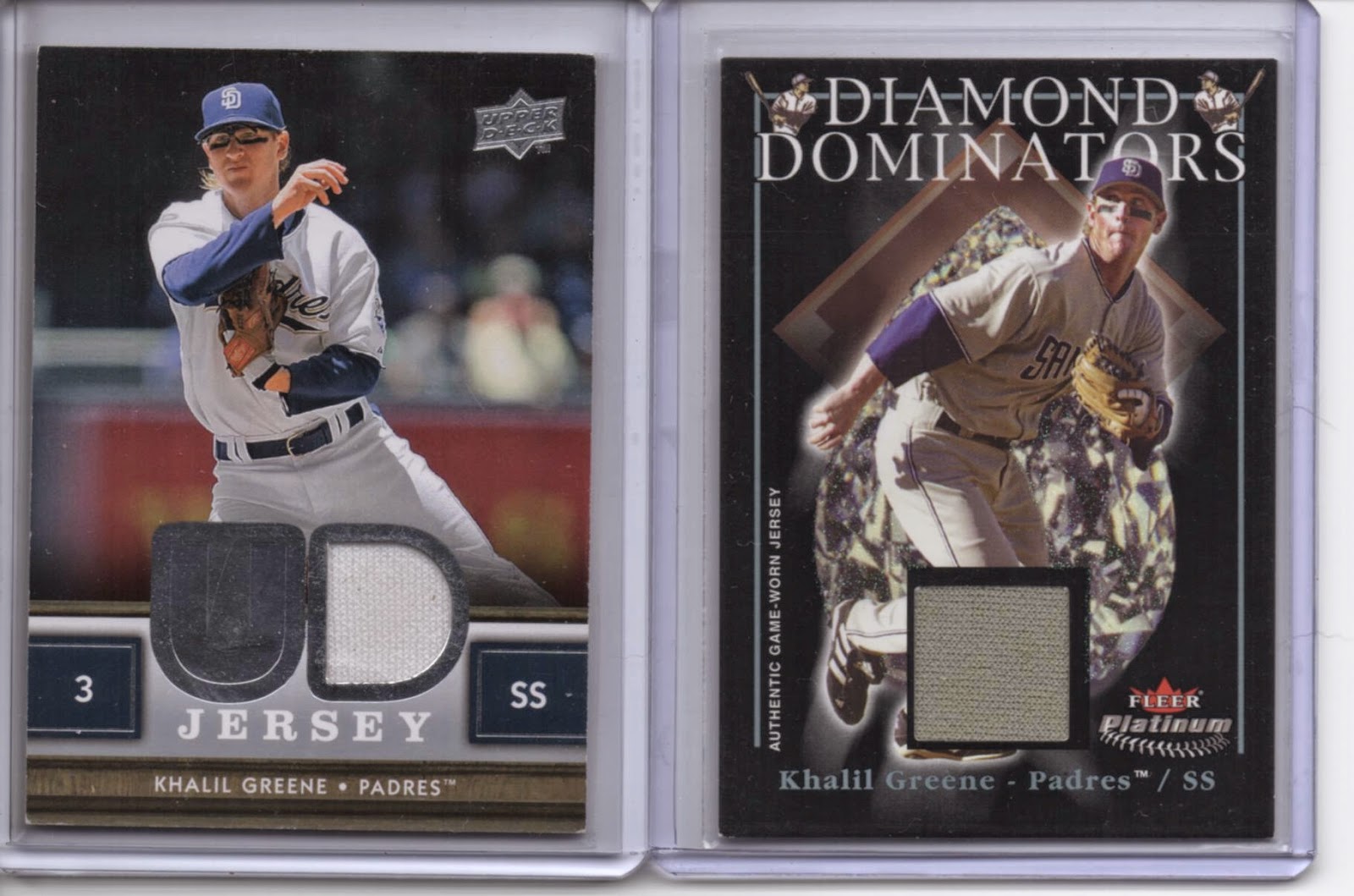 Khalil! A couple sweet Khalil Greene relics. Oh, Khalil. My socially awkward kindred spirit. There's a recent article that I skimmed here that basically says the pressure of baseball got to him and he's become a recluse since leaving the game. That's kinda sad. I hope he's happy, with whatever he's occupying his time with these days.

Thanks for the super cards, Matt! I'll try to send some cards back that'll measure up to these, though I know I'll fail and end up sending you a few things you either already have or don't really card about. Therein lies the trouble with trading with awesome traders like Matt! God bless 'em!
Posted by defgav at 4:02 PM