As I mentioned yesterday, I picked up somewhere around 150 cards at the recent show. It was over 2 purchase but both from the same dealer. First I hit his 50¢ bins. After buying a big stack, I dropped them off in my car, got off my feet for a couple minutes, and went back to hit his dimeboxes. This was probably the longest time I've ever spent at a card show, about 2 and a half hours. I always seem to have other stuff going on Saturdays that makes me keep it tight, so it was nice to have a comfortable amount of time to fart around. I probably would have even stayed longer, but the dealer was packing up.

So I'll split up the cards I got into a few posts. First up is the various 90s stuff. 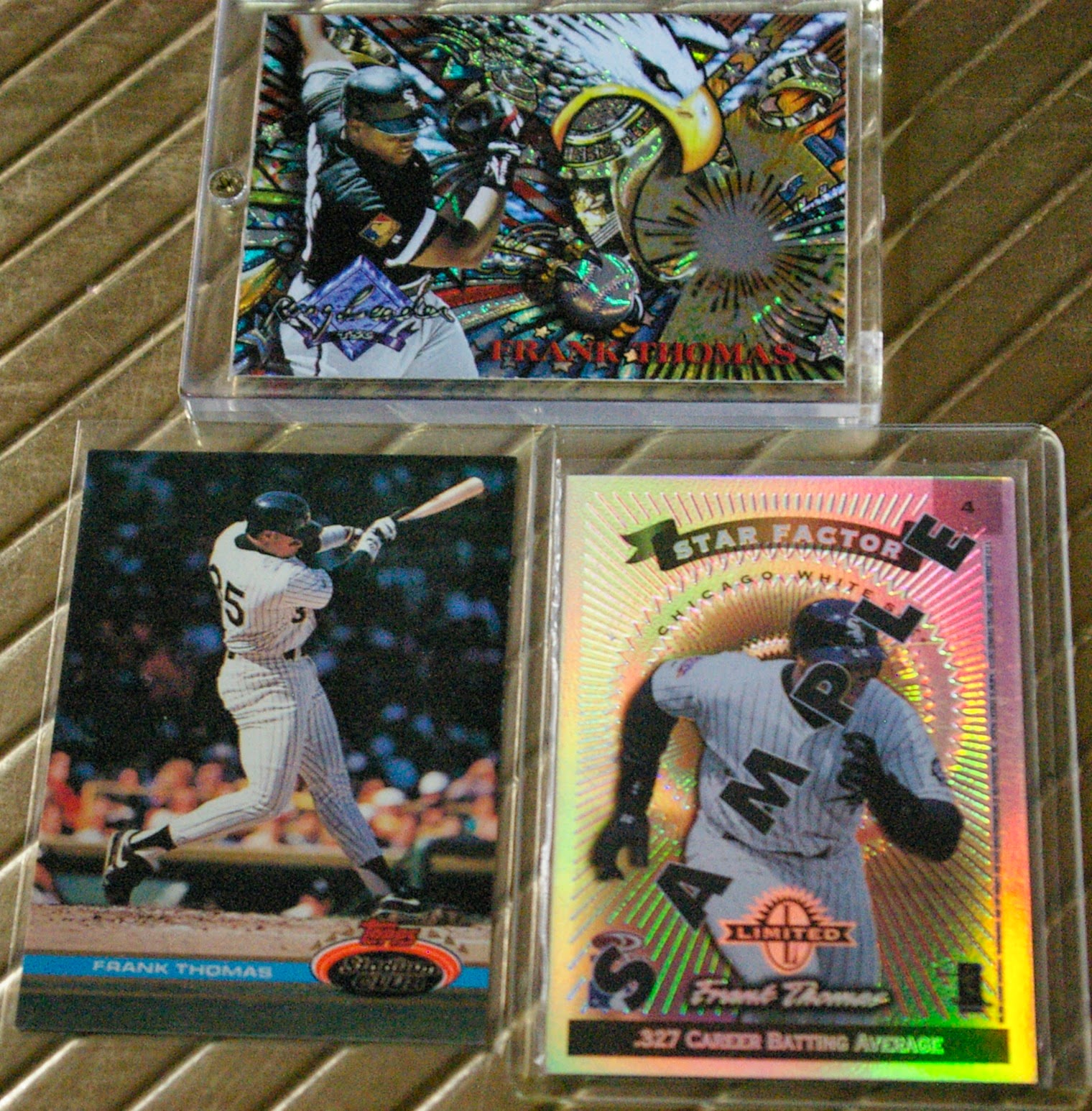 I've seen those "most ostentatious cards of all time" Ring Leader cards on other blogs, and had to get one of my own. Bonus gaudy point for the screw-down case. I already have that great 91 Stadium Club Frank Thomas card, but for a dime, hell, I'll pick up another one. That Star Factor is kind of a crazy 2-sided refractor. Apparently it's a sample. S A M P L E. 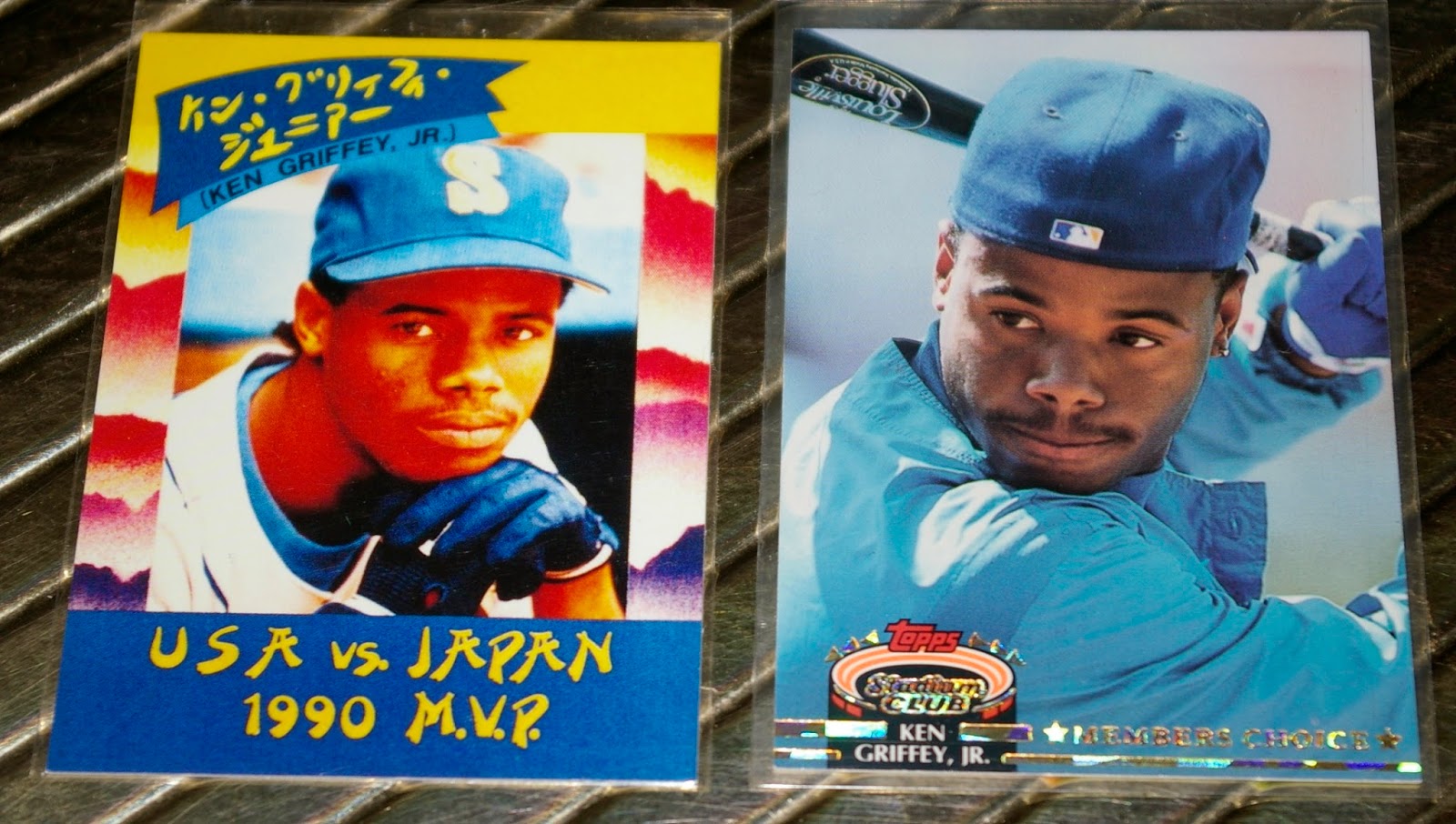 So very many Juniors in the bins. I grabbed these. 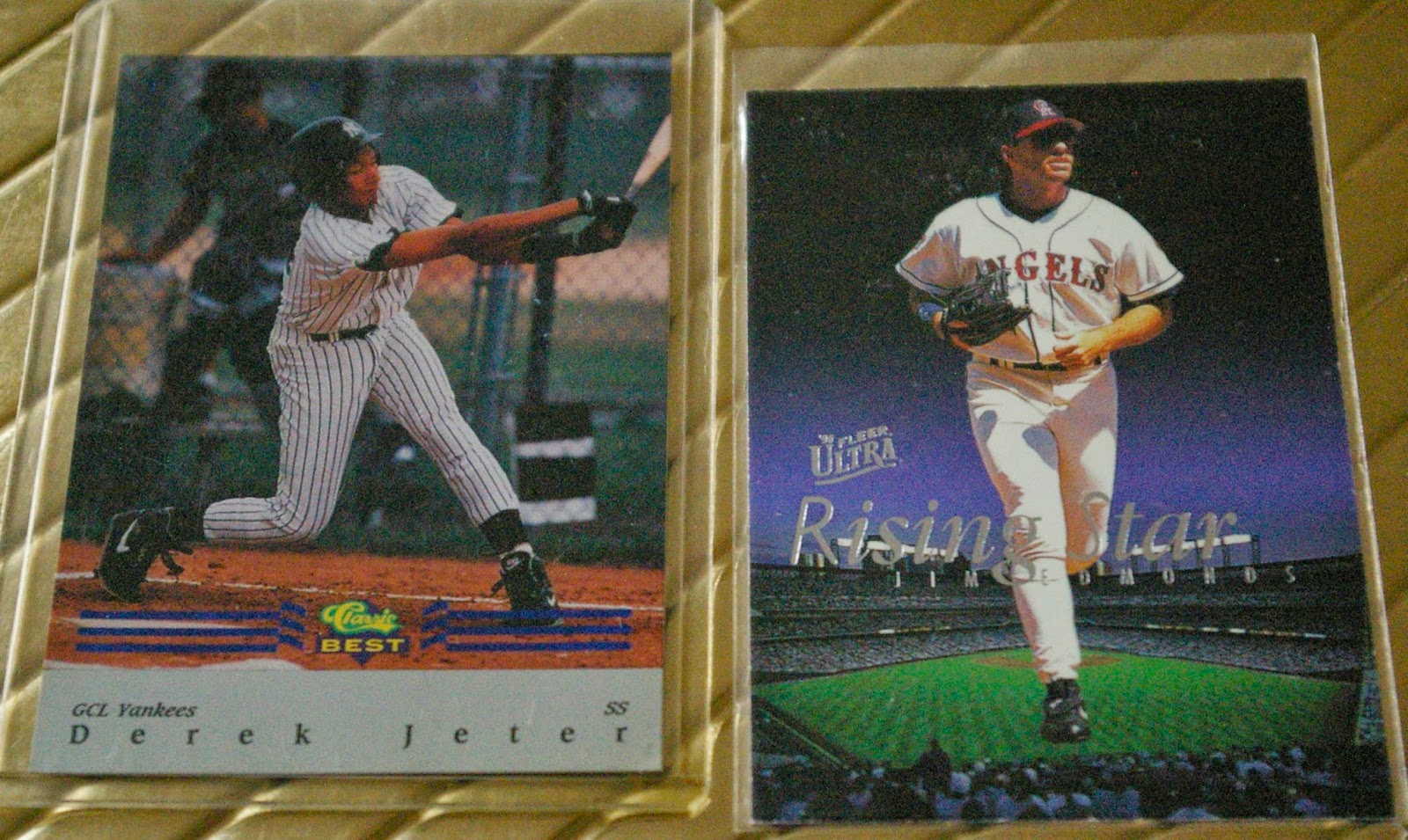 If Griffey was the most represented player in the bins, Jeter was a close second. I caved and bought one from his early days. Also got that Jum Edmonds for a dime. Yes, I see the typo I just made, but I think Jum is a cool name, so I'm not going to correct myself. 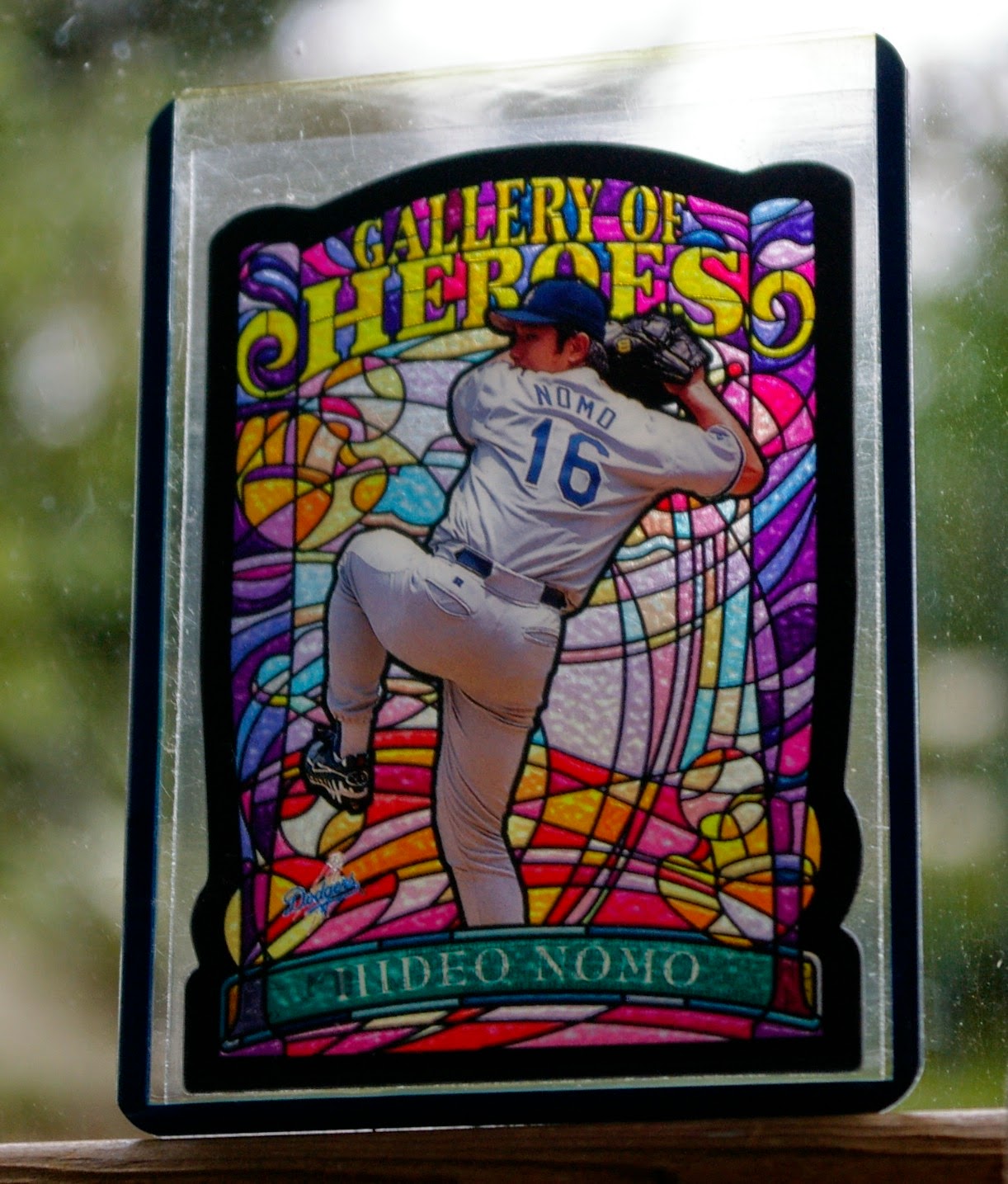 I didn't have any of these stained-glass-looking Gallery of Heroes cards, they are pretty neat. 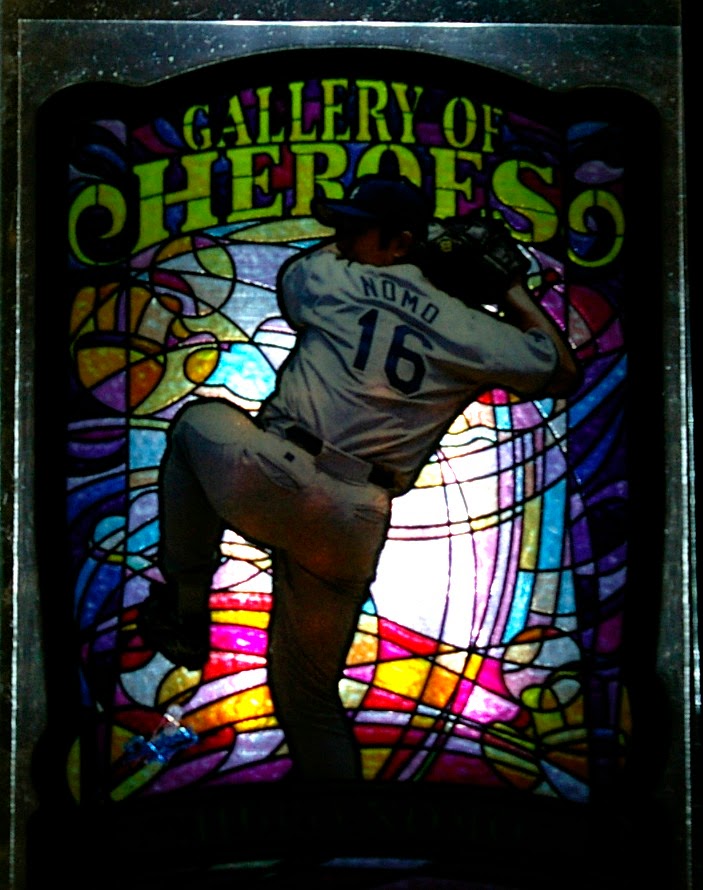 Here's another look at its majesty. Too bad Nomo isn't a guy I collect, but I figure a Dodger collector out there might want it if I decide to part with it. 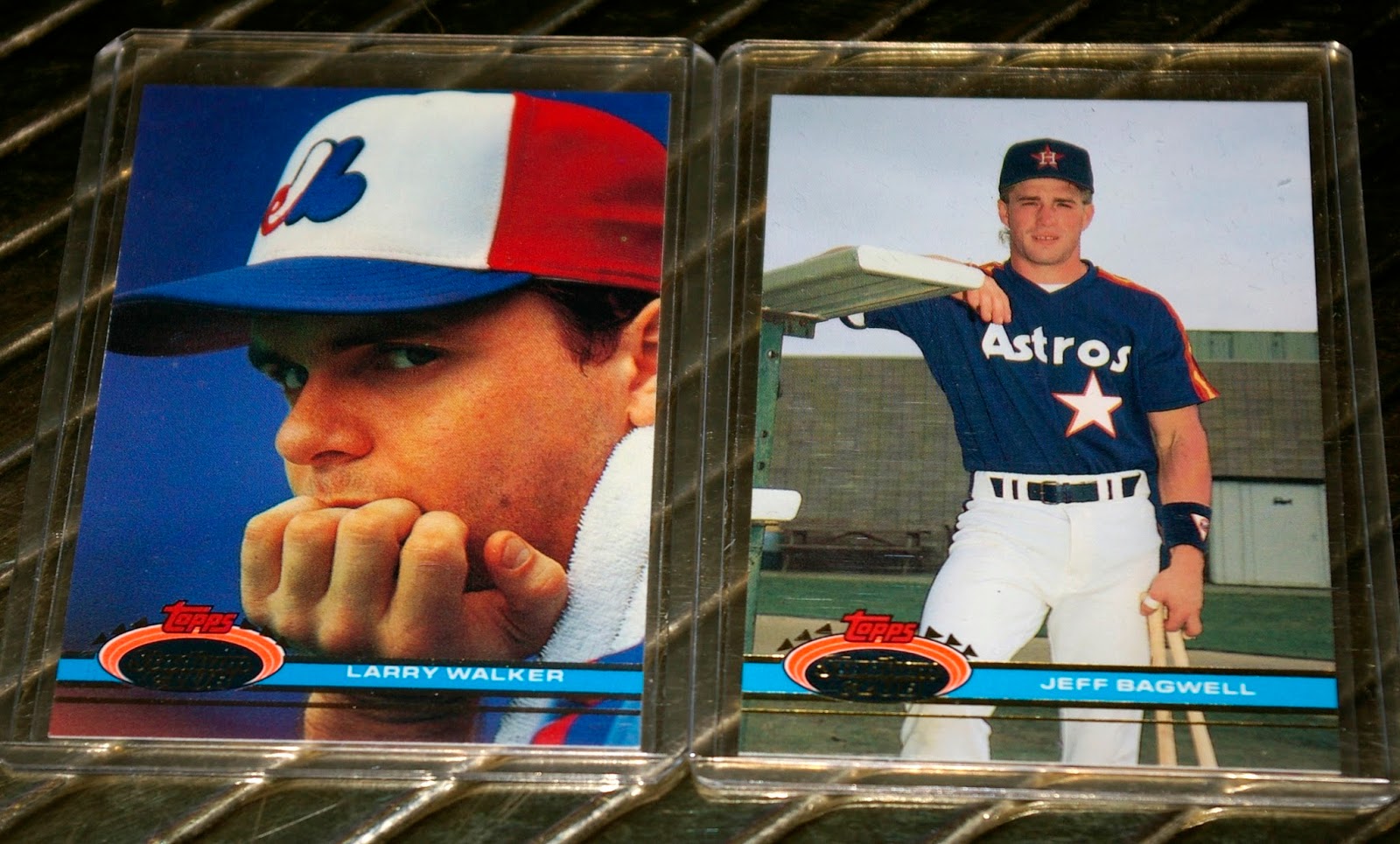 I seem to have gotten a few 1991 Stadium Club cards at this show. Perhaps my worst eBay experience ever was buying the complete set a couple years ago, but a lot of the cards-- mostly the "big money" cards, such as the Bagwell-- had a weird warped damage thing going on near the tops. I ended up returning the set for a refund, eating the return postage. Gah. Heartbreaking. I can't help but get a little sad when I look at cards from that set now. Around the same time, I also bough 1992 Stadium Club from a different seller. That was one fine, thank goodness. Also around that time, I bought 1990 Leaf. That sucked because all the best cards were missing. But the seller was apologetic and was able to dig up the missing cards and send them eventually, so it all worked out. After that, I stopped buying complete sets.