I brought home a mammoth haul from the card show yesterday, though I spent comfortably under $20. Much of that was thanks to being gifted with a box of stuff from a fellow blogger who happens to also be a Padres fan living in Portland.

I passed on last month's Christmastime card show, so it felt like an extra long time since I've thumbed through stacks of cardboard strange. No card I bought was over 50¢. I thought long and hard about picking up a blaster or hobby box of something to rip, but ultimately was strong enough to resist the urge. I don't know if I'm just at a good place with my collection at the moment, or if the pickin's were slim, but there just wasn't a lot I came across that I was feeling compelled to spend money on.

Back to the blogger box, Rod from Padrographs emailed me before the show saying he was downsizing his collection a bit and had some stuff to unload on me. Sweet! 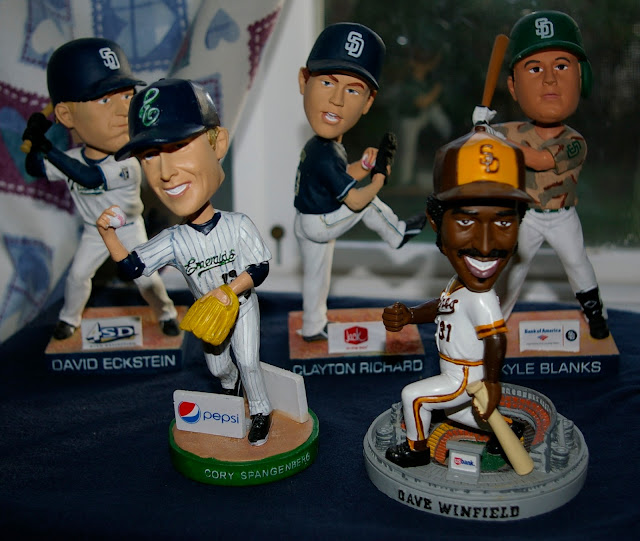 Every new year I joke that my only collecting goal for the year is to not add any bobbleheads to my collection, keeping my total at zero. But I can't resist free shit, so here we are! While I very much appreciate the gift, I would be interested in moving these to better homes, so consider these all up for trade by motivated owner. Want one? Let me know! 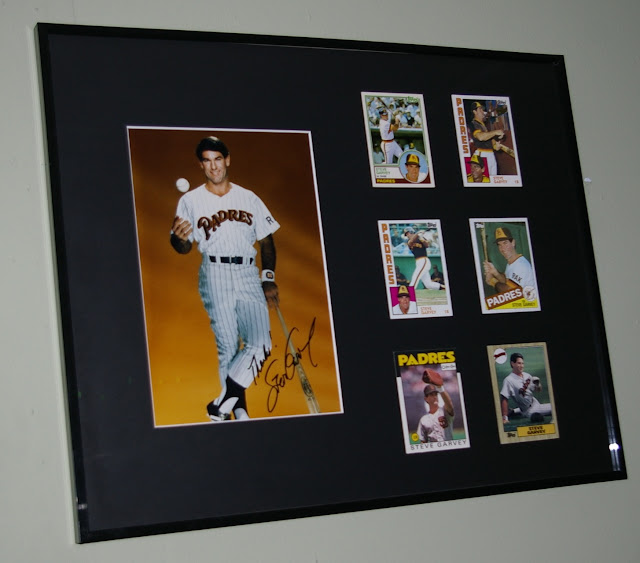 This glass-framed Steve Garvey display is probably the jewel of the box Rod gave me. Looks great with a signed photo and an assortment of cards from Garv's days in San Diego. 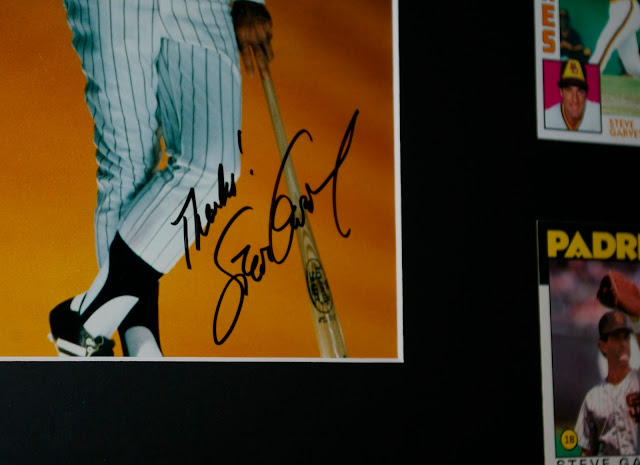 No, thank you! Already got this badboy up on my wall. 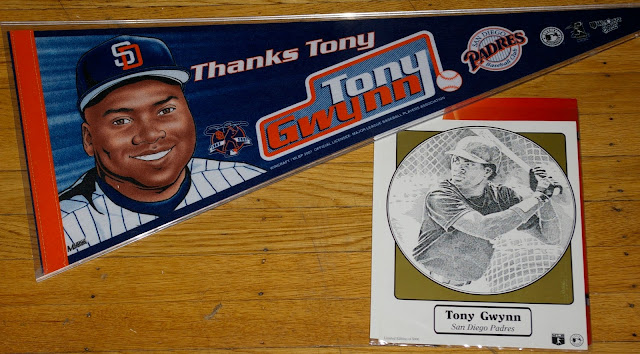 These commemorative Gwynn things will likely end up there soon as well. 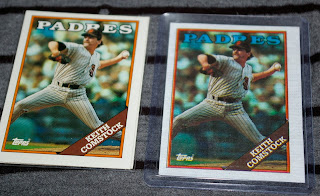 The only cards in Rod's box were these rare 1988 Topps Keith Comstock variations. One is an error with white letters in the team name, while the other is a cloth test pressing... 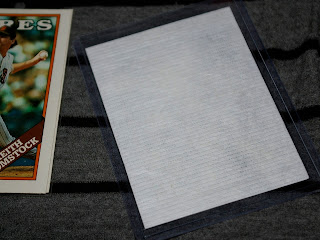 .. It's blank on the back. Kinda cool.. I had never heard of this. Per Baseballcardpedia, "1988 Topps Cloth is a 121-card, skip-numbered, set that partially-parallels the regular 1988 Topps issue. The set was a test issue that was never intended for release; however, was backdoored into The Hobby. Each card was printed on a very thin gauze-like material that retains water like a sponge."

Thanks for the stuff, Rod! As always, just let me know if I can ever return the favor with anything.

Once again my weakness for thick cases pulls me toward certain cards. That woody Caminiti is pretty cool, with the translucent center. We'll be seeing more from Cammy before this post is over. The Mark Buehrle is #'d 75/149. 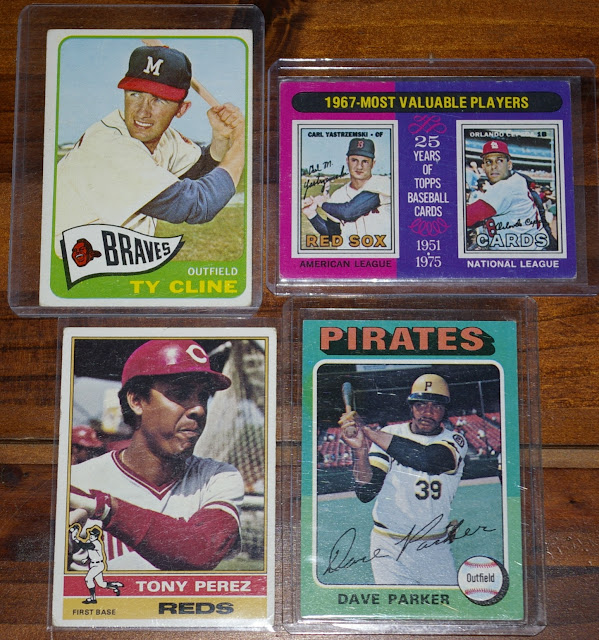 Some vintage, including the sole setbuild pickup from the show. I'm just 10 cards away from halfway-complete with 1965 Topps now. 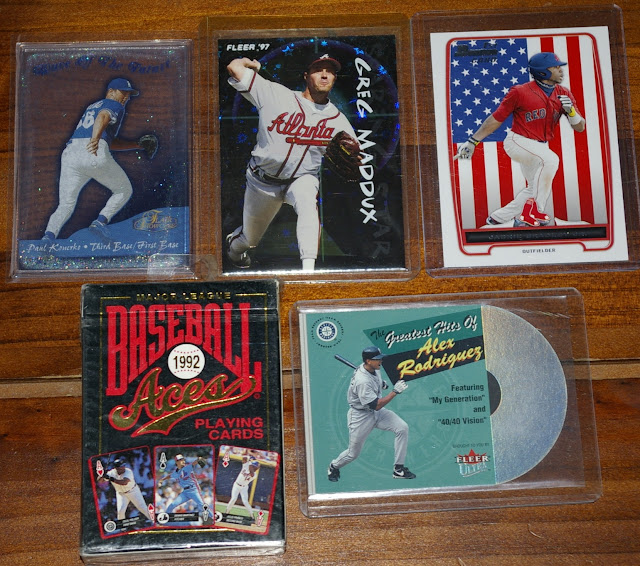 I love "water cards" and so that Konerko was an easy choice. The Maddux I was hopeful was a glowing parallel, but alas, it's not one of the glowing ones. That's Jackie Bradley, Jr with the patriotic parallel. That sealed box of 1992 playing cards was just a quarter, as were most of these cards pictured so far. I'll likely open it up and distribute the cards into various PCs, particularly tempted by the Julio Franco pictured. It's weird spending money on A-Rod cards, but these "CD" diecut inserts are cool. I'm not familiar with the song "40/40 Vision". Let's see if YouTube can help me out. [...] Nope. Let's try to think up more appropriate songs for his theoretical album.
"Stuck in the Middle With You"
"Your Cheating Heart"
"Hello" by Adele 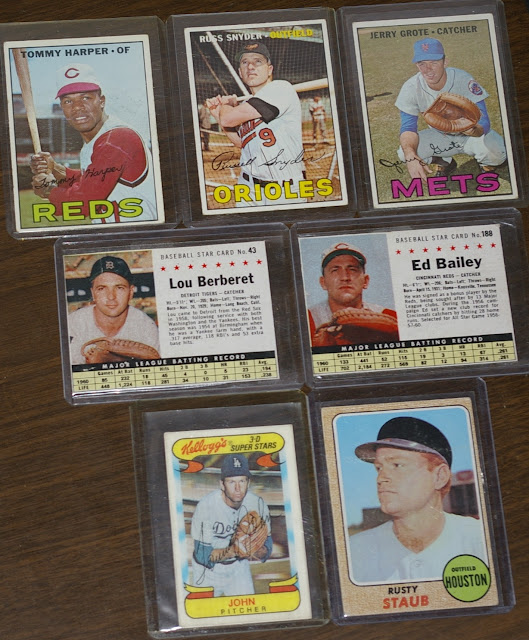 Vintage trade bait! Let me know if you're interested in any of these. 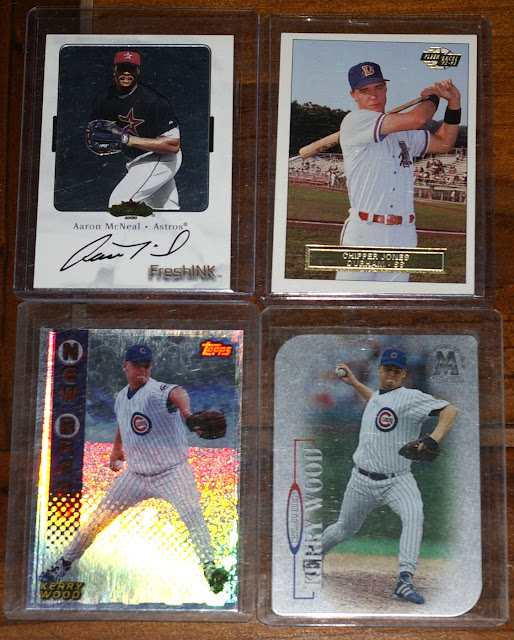 Modern trade bait! Want any of these? The Kerry Wood cards were picked up with P-town Tom in mind, but turns out he already has them, so now another Cubs fan has a shot. 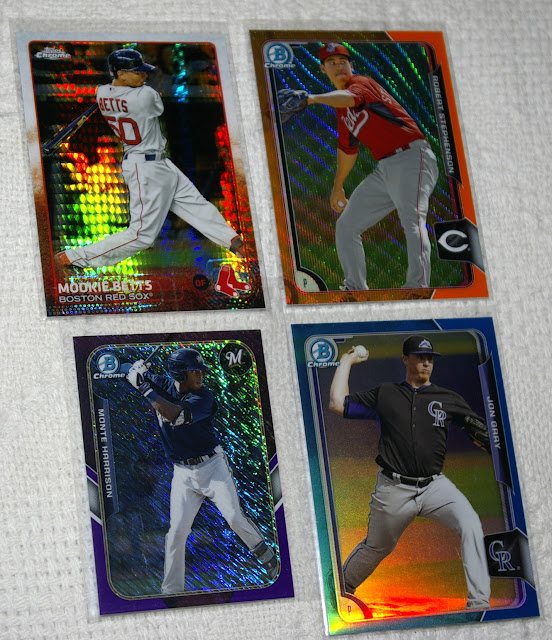 Here are my pricey buys of the day, at 50¢ each for these 4 cards. I'm just a sucker for a beautiful shiny card! Mookie Betts xprismfractor or whatever. The Monte Harrison is #'d 79/250 and may end up with Tony L. at some point. Jon Gray is #'d 29/150. The Robert Stephenson orange wave is unnumbered, but might be my best buy of the day. I think he's the Reds' top prospect at the moment. 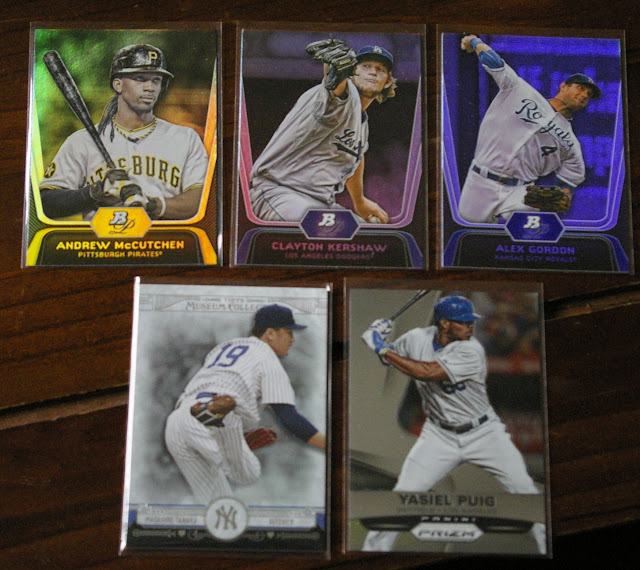 Now we're into dimebox territory. I believe these were 15 for $1. I don't really collect Tanaka, but a thick Museum Collection card for that price is hard to pass up. I think that Puig is the first I'm seeing of 2015 Prizm. Not a bad design, but I'm so burnt out on the brand and it's insistence with hitting you over the head with metallic silver. 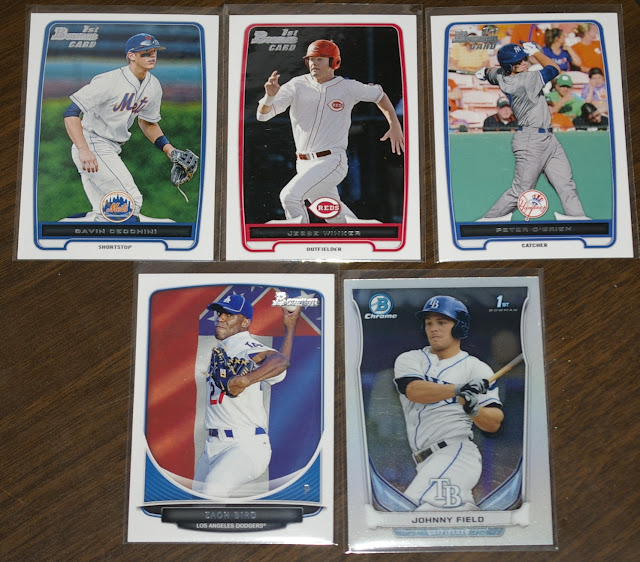 Some Bowman cards, including a Gavin Cecchini PC need and a few other solid prospects. Again, these were sub-dime. 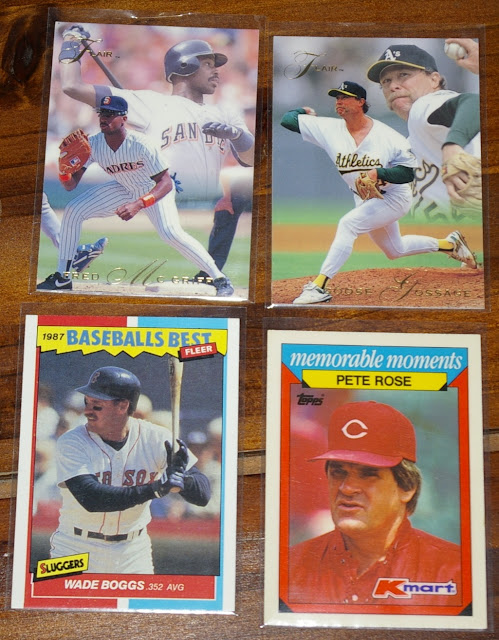 More cards. Love seeing Crime Dog as a Padre. Weird seeing Goose as an A. The Pete Rose card makes me laugh because of the time or two it was featured on Baseball Card Vandals. 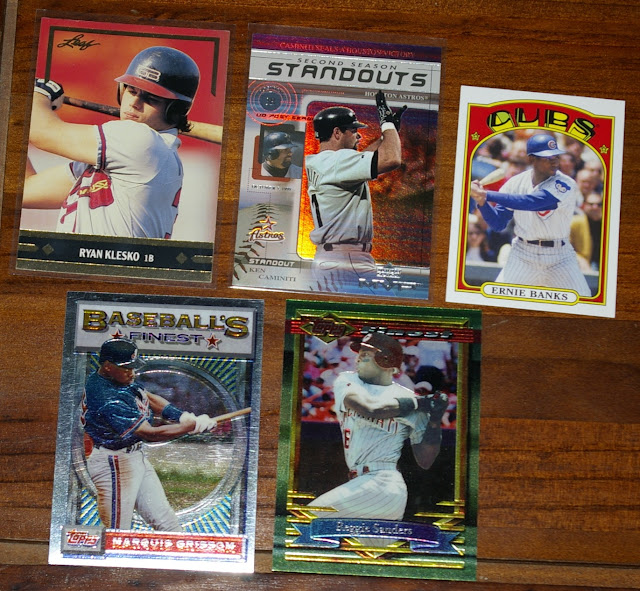 I had been looking out for a Klesko Leaf RC, so I was happy to find it in the dimebox. Also another Caminiti sighting. Ernie Banks mini. Finest from Marquis Grissom and Reggie Sanders.

There were a pack or two worth of Cooperstown cards in the dimebox. I pulled out these 3 guys including Vin Scully, a man who definitely needs more cardboard representation out there, a cause I've taken up by making customs.

A couple each of Vlad and Miggy.

Last thing.
I really try to keep my collection limited to cards only, mainly for space/storage reasons, but confronted with free bobbleheads and cheap signed baseballs, I'll sometimes break the rules. 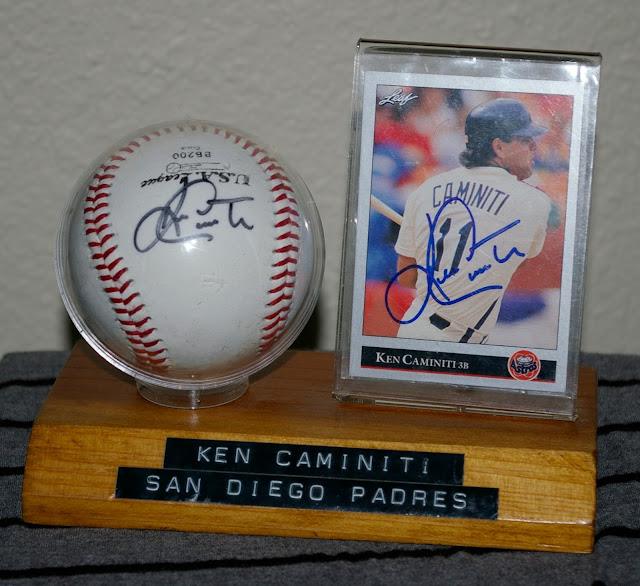 I said 50¢ was the most I spent on any card, but my splurge of the day was $5 for this autographed Ken Caminiti ball/card/display piece. It was priced at $10 and I debated it for a long time, walking by and talking myself into and out of it, and ultimately it was my final purchase of the day as I was on my way out, asking the guy if he'd take $5 for it. He said yes without hesitation, so everybody left happy. There's little doubt this is an authentic signed ball, because if someone were to bother forging it, they would certainly have done a better job, such as signing on the sweet spot. It's not the most impressive looking display stand, but for $5 I'm loving it. I'll likely swap out the card for one with him on the Padres, but that signed 1992 Leaf card is pretty cool, too.

The late, great Caminiti is a deep link for me to the Padres teams of the late 90s. I wasn't collecting cards at the time, but I watched nearly every game on TV and loved those teams, especially the '96 and '98 squads when they got into the playoffs. It's really just been in the past year or two that I've posthumously forgiven him for the PED shit and embraced collecting his cards, and this is a nice cornerstone of the Caminiti PC now.

So that wraps up another card show haul. Thanks for reading!
Posted by defgav at 2:12 PM