I love when I can use The Hobby to express myself creatively, such as by making cards and stuff. I started 2016 off by creating dozens of custom hardcopy cards, most of which went toward TTM requests, some of which you've seen, and some that are still out there in limbo.

Then I got a little burnt out on Photoshop. And so I returned to the organic artistic endeavor of sketchcards. It started with a Fergie Jenkins card to throw into the return trade package for CC. Then I decided to make some cards for myself. The vast majority of sketchcards I've made in my time have been specifically for trader buddies. But screw it, I figured it was time to make some for myself! So I picked a few of my favorite guys to collect, and drew cards of them. 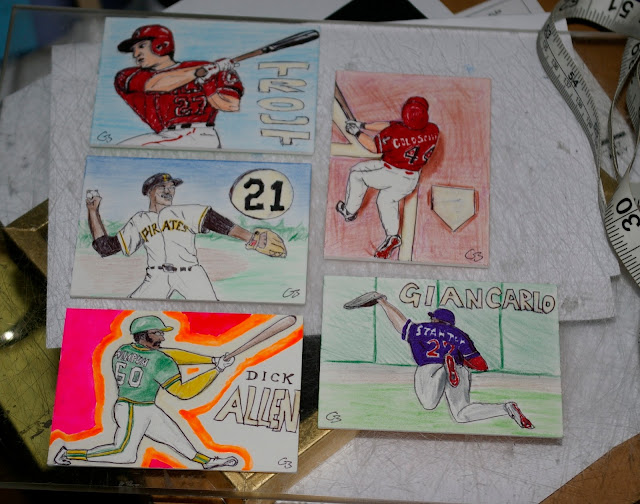 Aside: I've been on a Mafia kick lately. I recently started watching The Sopranos for the first time. I know it has the laziest ending of a show ever, but I figure enough people enjoyed the run that I should check it out. So I've been watching through it on HBO GO. And then HBO offered The Godfather Epic, which is Part 1 and 2 edited together, basically. I own the DVD box, but went ahead and tested my endurance and decided to watch that 7+ hour version. I wasn't able to fully bust it out in one day, but got in 5 hours one day, and the other 2 the next. Then I figured I'd be a glutton for punishment and watch Part 3. I had already seen 1 and 2 at least a couple times, but had never watched 3. Everyone says it's bad, but I figured I'd finish off the trilogy. And yeah, 3 isn't very good. The inter-cousin romance is a turnoff and the story is blah.

Anyways, these sketch cards were all made while I was watching the Godfather (except for the Trout which was during an episode of The Sopranos). I like being "productive" while sitting on my ass on the couch, so I'm going to try to start doing sketch cards while I watch movies. Maybe some for trader buddies, some for myself, maybe some to try to sell. I mean, I made these for myself, but if anybody out there is taken enough by one to pay me $20 for it, it's yours. Ain't too proud to make a few bucks here and there.

I know my drawing skill are quite amateur, especially compared to real artists out there, but hey, it's fun, and if I keep at it I'll likely improve over time.

And yes, my calling card is that my sketchcards glow in the dark, and these are no exception! 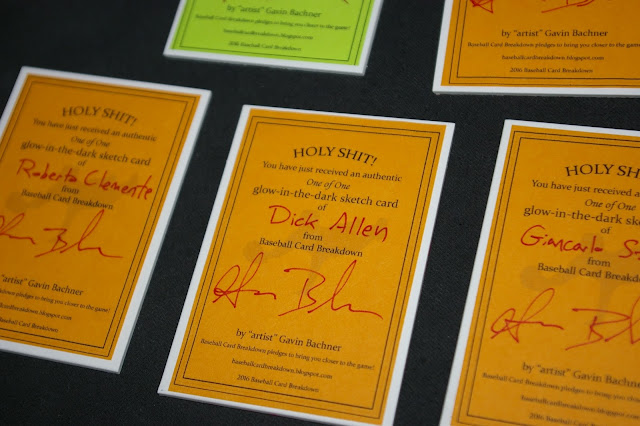 Thanks for stopping by. I hope you East Coast folks are doing ok in the blizzard.
Posted by defgav at 3:30 PM