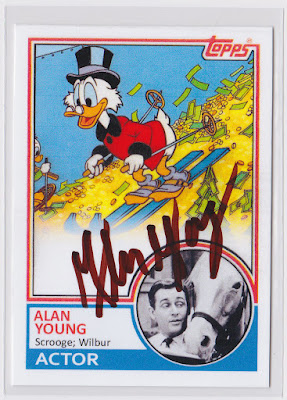 Did you know that the voice of Scrooge McDuck was also the human from the old TV show Mr. Ed? Neither did I until a couple weeks ago when Daniel Wilson posted a TTM success he got from Alan Young. I was so impressed that I immediately whipped up a custom to send to Mr. Young. 1983 Topps is my go-to design when I want to use 2 different pictures, and I think this one turned out wonderfully. Just a week or so later, the return showed up inked and I was a happy boy!


DuckTales played a big part of my childhood in the late 80s. In between my obsession with G.I. Joe (mid 80s) and baseball cards (1990-1993), DuckTales might have been the #1 thing I was into. I spent a lot of time back then watching the cartoon and playing the Nintendo game. And Mickey's Christmas Carol might be my all-time favorite Christmas special (or at least neck-and-neck with A Charlie Brown Christmas). So you can see how getting the autograph of the main voice behind these projects would be a big deal for me. 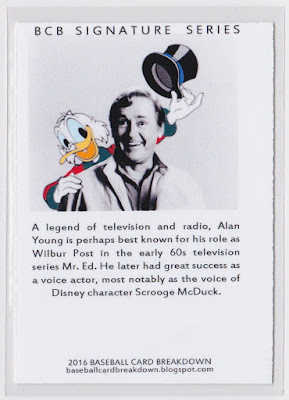 Alan Young is 96 years old, so between him and Bobby Doerr, my previous TTM success, I've definitely been hitting some top near-centenarian celebrities known for being gracious about signing. I can't stress enough how happy I am with the return and how appreciative I am that Mr. Young took a moment out of his day to sign for me. He also kindly signed a couple other cards personalized to me and my wife, who also loves him. 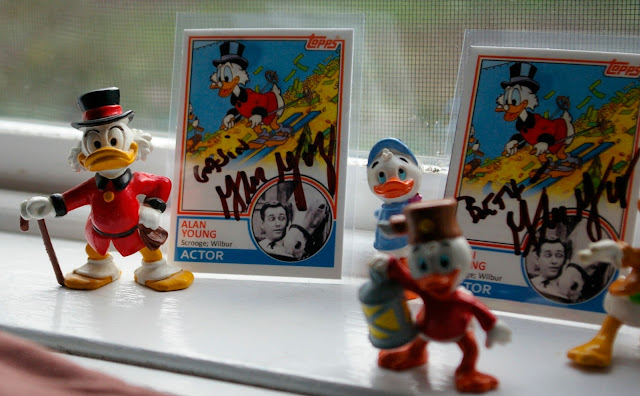