I had a bit of Amazon credit burning a hole in my pocket, and my wife was placing an order the other day and asked me if I needed anything from Amazon. I threw a couple things into the cart: a dvd set of Son of the Beach vol. 2 (I never buy dvds anymore, but dang it, this isn't available from Netflix and it was only $9.99 for the 3-disc set, and as I've mention before this show was a favorite guilty pleasure of mine) plus a hobby box of 2014 Topps Pro Debut. Normally buying baseball cards on Amazon isn't wise due to the price markups. But I've got a few hobby boxes sitting in my wishlist just in case anyone needs an emergency "thanks for being cool" gift idea for me, and out of all of them, the '14 Pro Debut box was the closest to the going rate on eBay; only a couple bucks more than what I would have paid for the cheapest box on eBay, so I blew some store credit on one.

In recent months, I've busted boxes of 2015 Pro Debut and 2010 Pro Debut, and they were fun and fresh for me, so I thought why not keep the minor league action going?

Just a few packs in, the box cemented itself as one I would fondly remember forever: 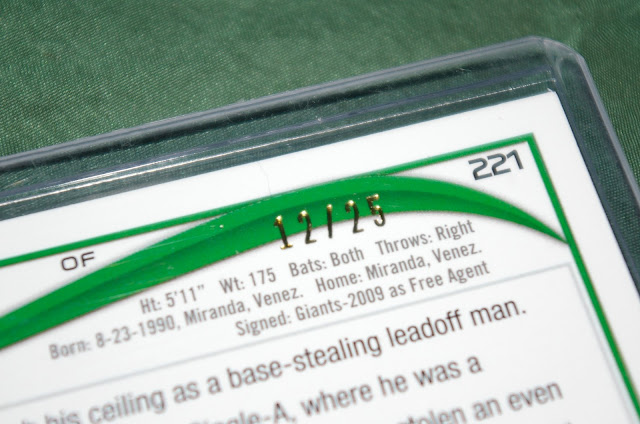 Readers of this blog likely know that one of my favorite quirky collecting bents is cards serial numbered 12/25-- "Christmas Cards" as I call them. While I've built up a decent collection of such cards, I had never personally pulled one before. Even after my sweet ripping binge on mid/high-end product I got as gifts over the holidays, while I pulled a few /25 cards, none were lucky #12. 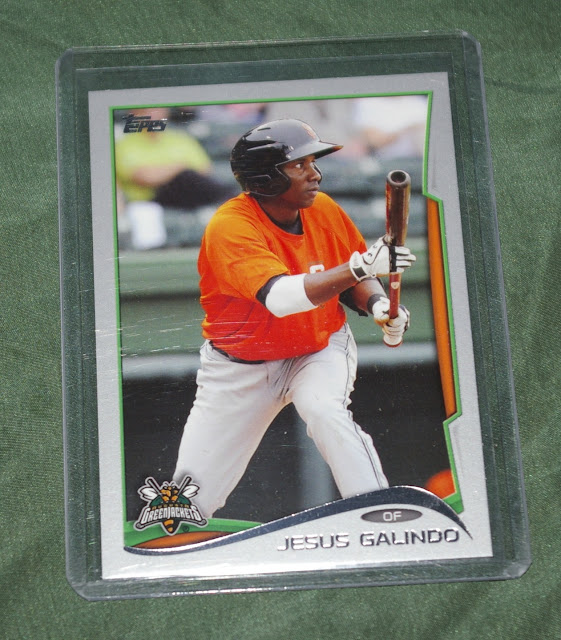 But my Christmas wishes were finally answered in the form of this grey-- er, I mean SILVER-- parallel of Jesus Galindo. And yes, the satisfying coincidence of my first Christmas Card pull being a player named Jesus is not lost on me, I assure you.

Galindo signed with the Giants as a free agent out of Venezuela in 2009. A fleet-footed/light-hitting outfielder, he's amassed 250 stolen bases over 7 seasons in the minors while batting .261. Probably not great odds on him ever being a notable major leaguer, but he'll always have a place in my heart thanks to pulling this special card.

Ok, now let's check out some of the other highlights from the box! Just a couple packs after pulling the Jesus, was this: 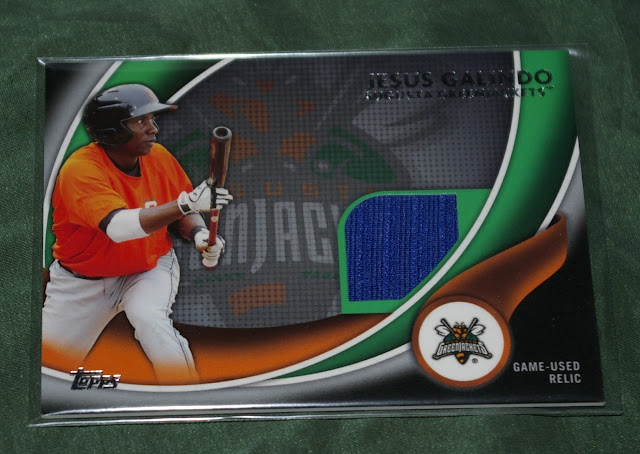 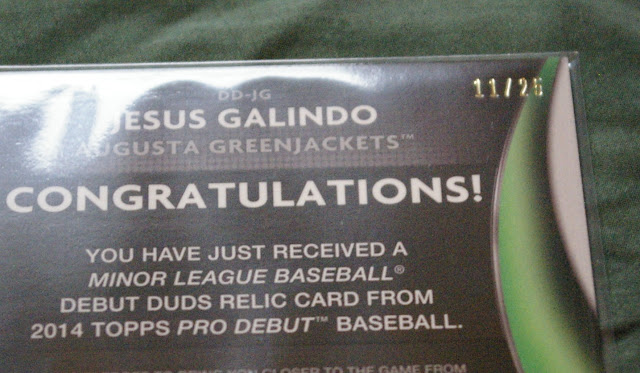 Yuletide lightning nearly struck twice, as this card is just one number away from being another Christmas Card. That would have been cool. I later pulled his base card. So I'm pretty much a Jesus Galindo supercollector now thanks to this box. 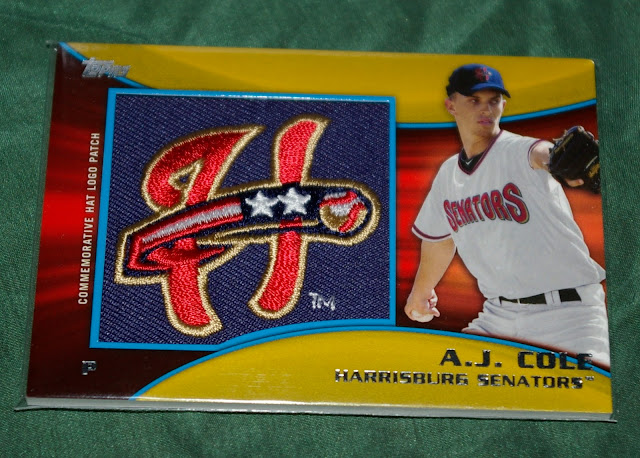 My other promised relic was this manipatch of AJ Cole. He cracked the bigs last year for 3 games with the Nats. 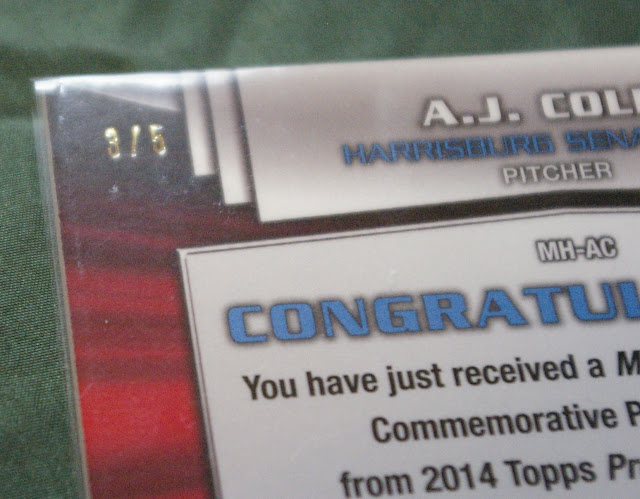 Cool thing about this card is it's a parallel numbered 3/5. I was lucky enough to pull a couple printing plates last year, but besides them, I believe this is the lowest numbered card I've ever pulled.

Here are my 2 promised autos, plus a /50 gold parallel. I'm a little frustrated with Pro Debut as my hits seem to nearly always be pitchers. Prospecting on pitchers has about the same odds as winning the Powerball jackpot.

Derek Law is a reliever in the Giants chain. With the charcoal border, I thought it might be a parallel, but it's unnumbered, and when my other auto was also in that same border, I realized all the autos must be like that. Kyle Hunter is in the Mariners organization. Edwin Escobar went from the Giants to the Red Sox in the Jake Peavy deal. These 3 guys are all respectable pitchers, I guess, but none of them is anywhere near being the next Kershaw. All available for trade. 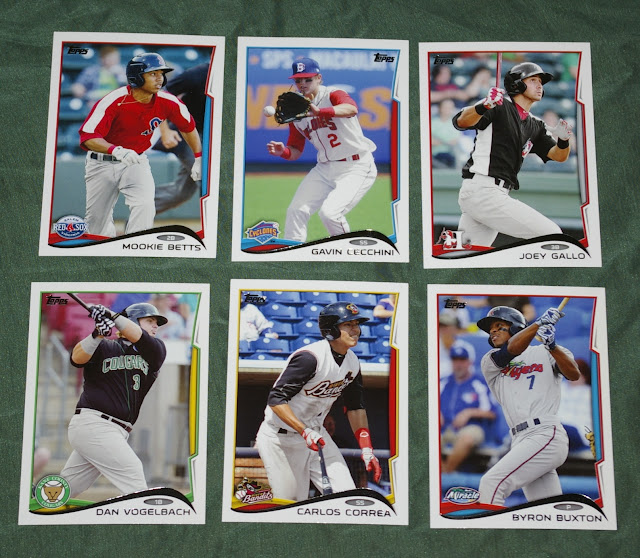 Out of the base cards, here are a few I was most thrilled to pull. Mookie Betts might be my fastest-growing player collection over the past several weeks. Happy to pull a needed Gavin Cecchini. Joey Gallo, Vogelmoster, Correa, and Buxton are also exciting young dudes. 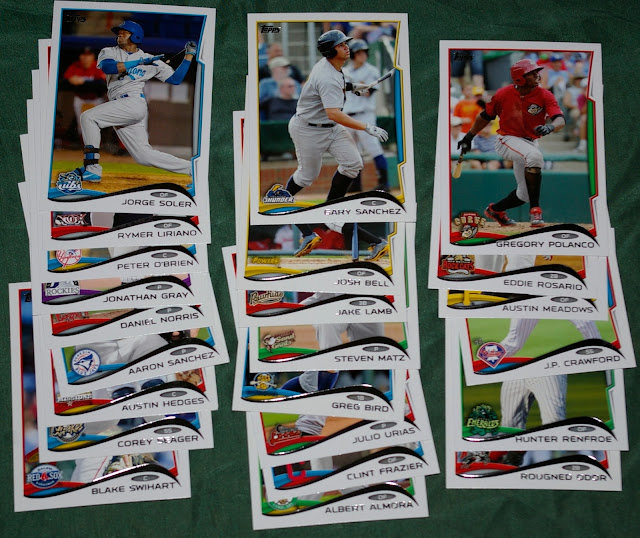 Some other names that rang a bell for me. 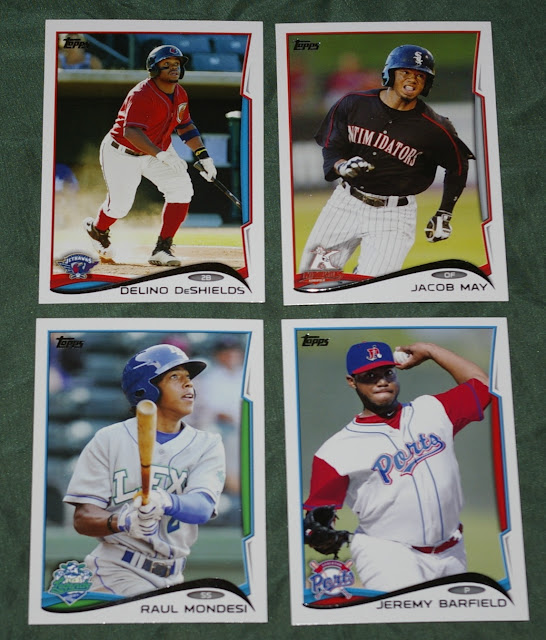 Baseball family dynasties. I just featured Jeremy Barfield the other day in a Black Sheep Minicollection post, and before this card, I hadn't realized he converted to pitcher. 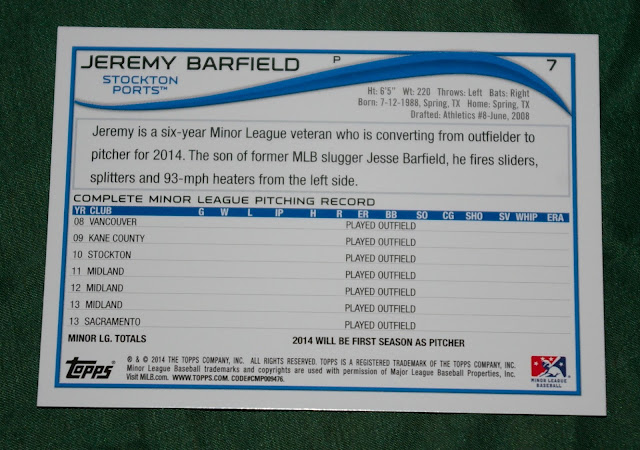 It seems that conversion was a one-year experiment in 2014, as he only had a couple brief outings on the mound in 2015, mainly playing right field again.

So there was that box. Again, personally pulling a Christmas Card was a joy for me. The hits were fine, if nothing to get too excited over. Several good base cards, including a couple PC needs. And plenty of tradebox fodder. All in all, could have found a worse way to blow $52 of Amazon store credit.


I'd like to close out by saying it sucks to no longer get to share a planet with David Bowie. I've got an even 100 Bowie songs in my iTunes, a number exceeded only by the Beatles. I've been celebrating his music today playing through them all. Thanks for the great stuff, Mr. Bowie! You'll be missed.
Posted by defgav at 3:00 PM