Reggie Jackson customs to shatter your perception of reality

I've been spending a lot of time making custom hardcopies here in the first couple weeks of 2016. Too much fun! Today I'm featuring some amusing Reggie Jackson cards I've cranked out.

Brace yourself; This is a real image: 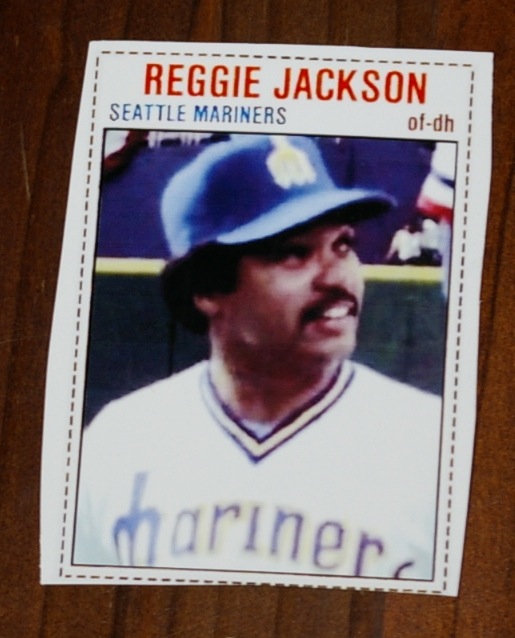 Was this the ultimate "short-term stop"? Not the highest quality picture, but again, that's a real, non-photoshopped image of Reggie Jackson suited up in a Seattle Mariners uniform. It seems when Reggie arrived at the Kingdome for the 1979 All-Star Game, he found himself without his Yankees uniform. When it came time for the team picture, a home Mariners jersey was deemed a suitable emergency solution. And so for that brief moment, Reggie Jackson was a Mariner. Well, close enough for cardboard.
He got a proper Yankees uniform in time for the actual game.

As for the card, I used the 1979 Hostess design. I'm sure it's not plausible that this would have ever been a real card, but hey, it's fun.

I made the custom in the true dimensions of a Hostess card (slightly smaller than a standard card). While I could have cut it out straight, for added authenticity I got cute and hand-cut it with scissors. I even used my non-dominant hand and purposefully made the cut job shaky to replicate the work of a kid in the late 70s hopped up on sugary snack cakes. 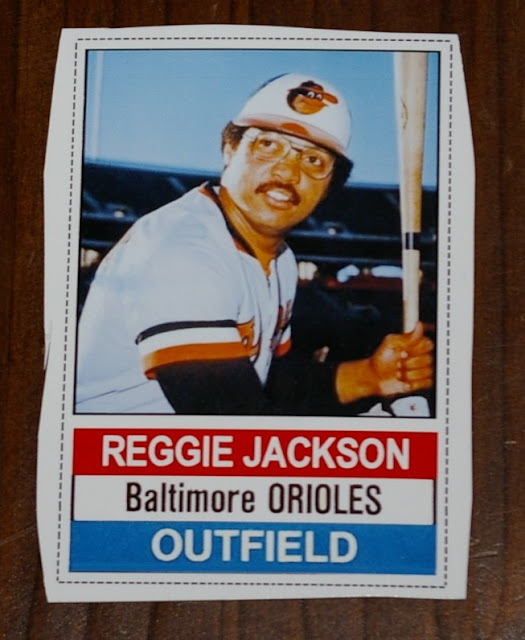 This is not entirely my custom, but figured I'd make a physical one of these while I was making fake Hostess Reggie cards. Credit goes to John over at Cards That Never Were for this 1976 Hostess mockup, a card that definitely had more legitimate plausibility than the Mariners card. I did some minor tweaks getting it "printer ready," but John did the heavy lifting on this one and posted it on his blog a year or two ago. I'm enamored by the sight of Reggie in an Orioles uniform, and seriously considered printing out copies of all the Reggie O's customs on the web I could find (there are several), but for now I've decided to be content with just this one. 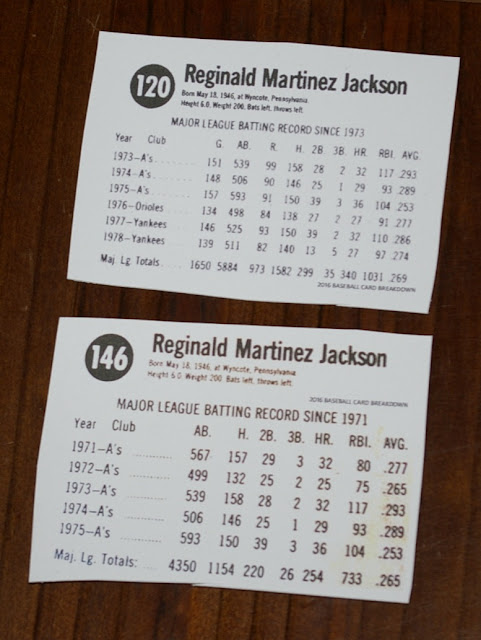 They both have backs replicating the original Reggie Hostess cards, with the additional tiny line of "2016 Baseball Card Breakdown," lest down the road they trick someone into thinking they're real. My goal is to make cards that seem genuine at first, but upon closer inspection are obviously customs. I'm not in it to maliciously fool people or make counterfeits.

Next up is another a fun one. 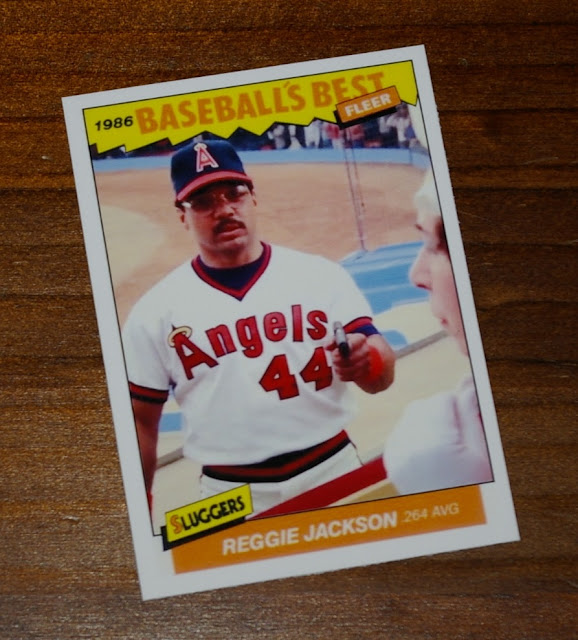 I loved the Naked Gun movies as a kid, and still chuckle when I watch them today. Reggie's great performance as a hypnotized monarchical assassin is probably a big reason I collected his cards so hard in the early 90s. So getting it represented on cardboard is pretty cool in a "full circle" kind of way. 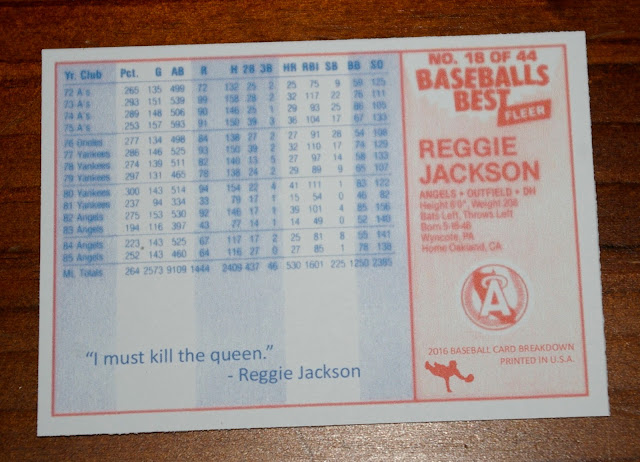 It's complete with a back mostly-faithful to the original 1986 Fleer Baseball's Best Reggie Jackson card.

Let's close out the post with somebody besides Mr. October. 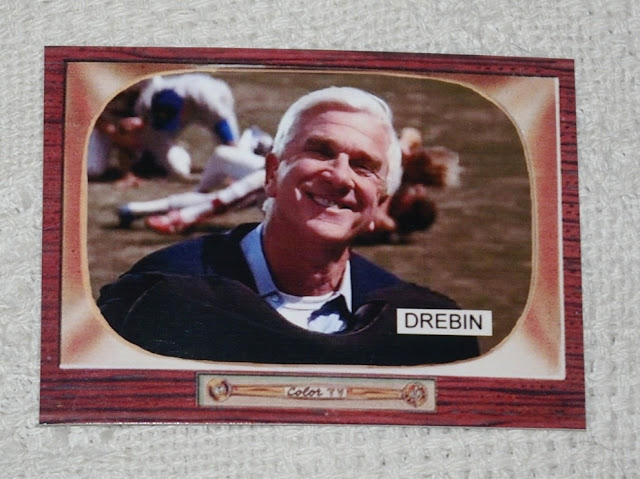 Staying with my tribute to Naked Gun, here's the legendary Leslie Nielsen as Frank Drebin going undercover as an umpire. 1955 Bowman actually did have umpire cards, so it was a no-brainer for which design to use when the idea for this custom struck. Also like the original '55 Bowman cards, it's slightly larger than today's standard-size cards. 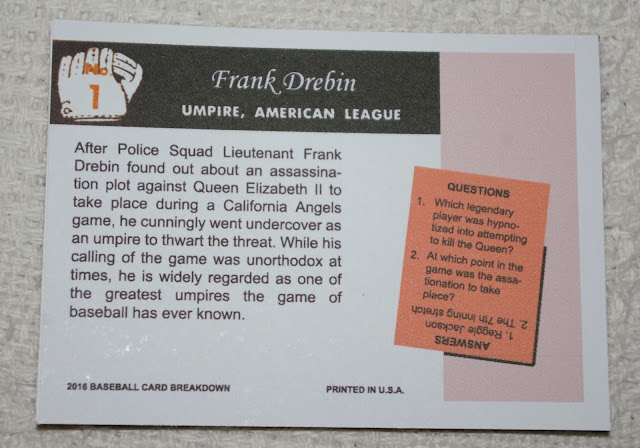 I actually made the front of this one a few months ago, but just finally got around to finishing it up with the back yesterday along with the 3 Reggies.

Pretty neat stuff, if I say so myself!

As with pretty much all the customs I make, if you want one in your collection, these are available for trade, so just let me know.