I'm a big Star Wars dork, so with my recent revved up activity doing TTM requests, one person I had to go after was Carrie Fisher. Unlike most of the notable Star Wars folks, she's known for being good about signing**. Like with my previous success (Alan Young), this request was actually inspired by a post at It's Like Having My Own Card Shop. I read about Daniel's success, and immediately jumped on photoshop to whip up a custom to mail out later that day. It arrived back successfully in less than 2 weeks and I'm thrilled about it! 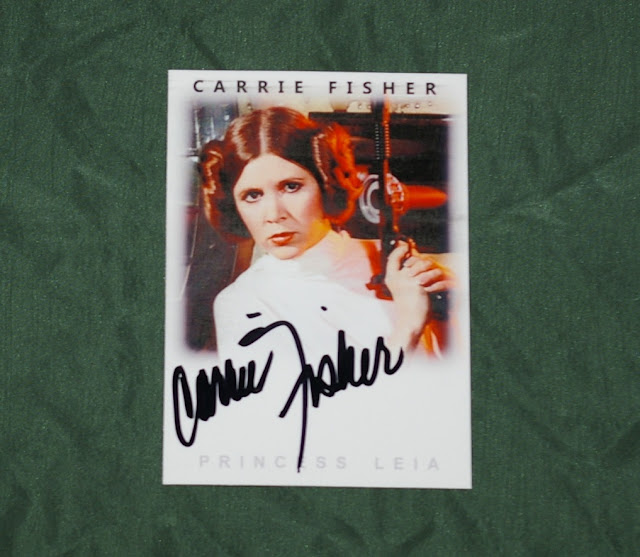 Once again, I turned to the tried-and-true 1996 Leaf Signature Series design for my custom autograph cards, as they're simple to make and look great, with plenty of room for the autograph. And once again like with my Neshek return, there was some minor smudging/running, mostly at the top.. not sure if it's my ink or paper, but I blame the damp Oregon winter weather, even though I drop them directly inside the post office. A little moisture is getting in there somehow. Maybe I'll try some of these again in the summertime when it's dry and hope that cuts down on this issue.

I thought this was a pretty badass picture of her circa A New Hope to use. I was tempted to use a sexy gold bikini "Slave Leia" picture, but ultimately decided to keep it classy and respectful (though Ms. Fisher has repeatedly said she has no problem with the outfit). I like to think of myself as an enlightened type of guy who doesn't treat women like objects. In spite of the "girlie cards" I feature on my blog from time to time, I think one could even say I have feminist leanings.

Now for the back of the card: 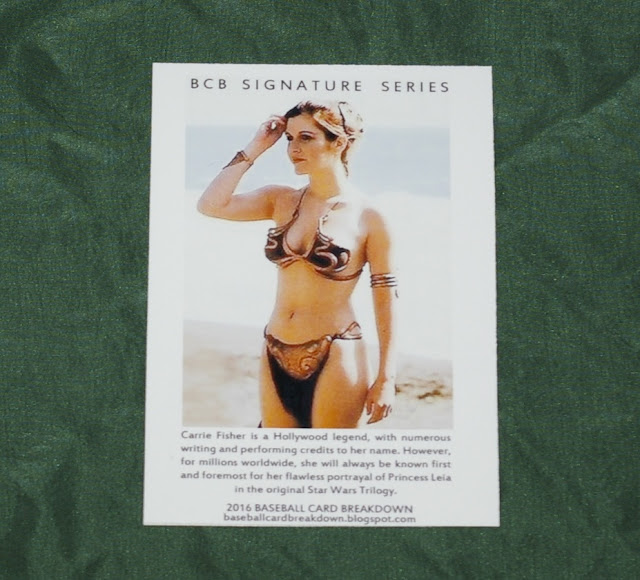 Ha, ok, I tried, but I'm still just a man who's a fool for a pretty lady, and had to sneak a sexy bikini picture onto the back. I think this was during a Rolling Stone photo shoot at the beach around the time of Jedi. Gorgeous!

But to regain my composure here.. what a woman Carrie Fisher was and still is. Loved to see her in the latest Star Wars movie. She still rocks, pushing 60.

**Ok, now for the caveat on the signature. Yeah, Carrie Fisher is good about signing TTM autograph requests.. perhaps a bit too good. I poked around a little and found most autograph-hounds will be quick to tell you that the vast majority of Carrie Fisher autographs are "sec" signatures, lingo I recently learned. It's short for secretary, and is a term for when a celebrity has an assistant forge signatures. So unless you witnessed the signing yourself, be wary of its authenticity.

Do I think this is a sec? Yeah, probably. But who knows.. I'd like to naively hang onto a shred of hope that maybe she really signed it. It looks good to my untrained eye. But I'm sure she gets a ton of fan mail, especially these past few months with the Star Wars hype kicked into overdrive due to The Force Awakens. It'd be hard to believe she keeps her signing/returning game that tight under the circumstances, and for no fee.

Some say her mother (Debbie Reynolds) handles all Carrie's fan mail. And getting Carrie Fisher's autograph forged by Debbie Reynolds is kinda cool in its own right.

But whatever! I got an autograph from Carrie Fisher™ and I'll take it!

While I've got you here with a Star Wars themed post, I figured I'd show off a couple SW items I got from my step-dad last month for Xmas/my birthday.

Star Wars PEZ collector's set! LOL. These are kinda cool. I don't really collect Pez dispensers, though I probably have 3 or 4 hanging around from over the years that I've never thrown away, making me a de facto collector, I guess. I do like Pez candy, though, so I've got the dilemma of whether to open this and eat the candy, or leave it sealed for whatever "collector value" it may one day have. 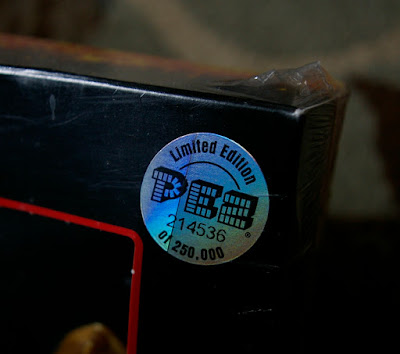 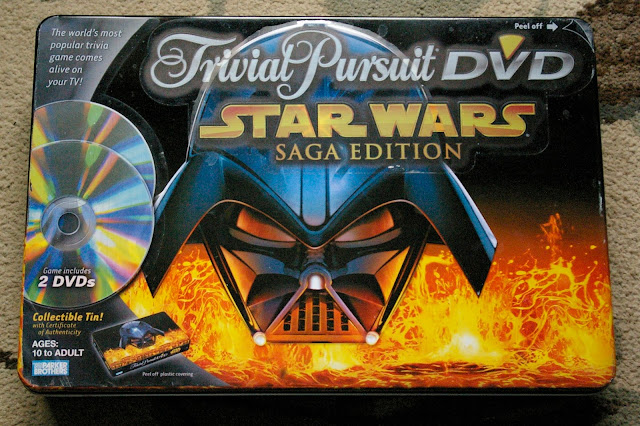 The other SW item I got is this Trivial Pursuit game. It looks pretty cool and was a thoughtful gift idea. However, none of my family or local friends are anywhere near as into Star Wars as I am, so I'm not sure how much use I'll actually get out of this. We broke it out briefly at Christmas, and even I was struggling to bat .500 with the questions. The rest of my family was lucky to get an occasional "gimmie" or throw up a hail mary. So yeah, family game night will likely stick to the classics like Scattegories and Monopoly. (Star Wars Monopoly would probably have been a better gift idea because I assume you don't really need to know a lot about SW to play it.) Honestly, I'd be interested in moving this Trivial Pursuit game, but the big heavy tin makes me scared of the shipping cost. Perhaps I'll try Craigslist. The tin is dented on one corner, and as I said, I've already opened it up and played with it for a few minutes, so it's not really in "collectable" condition any longer. If any of you guys want it, I could let it go for $25 shipped in the US. (I feel like a jerk talking like this about a gift, but the reality is I won't get much use out of it and it just adds to my "stuff".)

The coolest part of the game is probably the little gamepieces. Ha, looks like they're holding bats.

My step-dad is a good guy, and it's always fun getting Star Wars related gifts, even if they might miss the mark slightly.