Padres customs to shatter your perception of reality (+ a contest)

Along the lines of my Reggie Jackson Mariners card, I created some new customs that are a bit outlandish, yet feature real, undoctored images. Sure, anybody could have fun photoshopping a Marlins hat on Roberto Clemente or whatever dumb idea you could think of, but I think it's neat to document on cardboard bizarre moments that actually happened.

Today is pretty much just for me and the 2 or 3 other Padres fans who read my blog. These cards feature great players I would have loved to see play for San Diego at some point in their careers. While that never happened, they all did briefly don a Padres cap, helmet, or jacket, and dang it, that's good enough for me to exploit the image to create a fantasy card.

Nolan Ryan had just one All-Star at-bat in his career, it coming during the midsummer classic at the Metrodome in 1985. He must not have remembered to bring his Astros batting helmet along for the trip, because he bizarrely came to the plate as a Padre from the neck up. 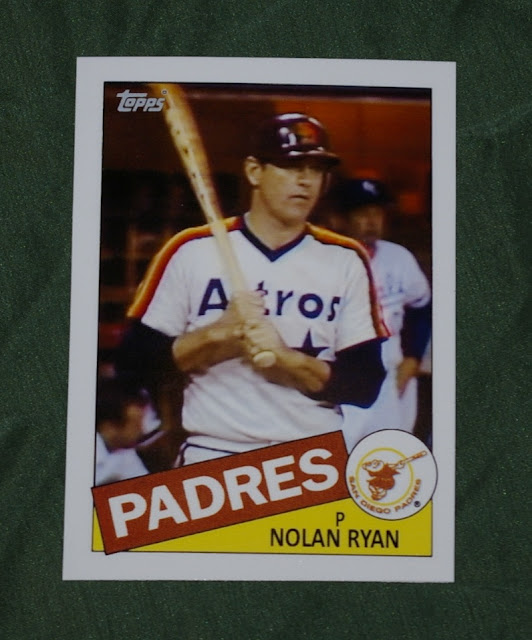 Here's the broadcast on YouTube queued up to the at-bat. The broadcasters never mention the helmet. Whatever the circumstances behind the move, it's cool for me to see one of the game's all-time greats kinda-sorta representing the Padres on the field. The card obviously isn't realistically plausible, but let's say somebody at Topps was a raging alcoholic and drug addict, happened to catch that at-bat on TV and in their confused, impaired stupor, haphazardly whipped up this card and it somehow got into the 1985 Topps Traded set. Hey, it could happen! :P

CONTEST TIME! Through some sleuthing, I was able to determine with reasonable certainty whose helmet Nolan borrowed. Be the first to correctly guess my conclusion in the comments below (one guess per person), and I'll create a hardcopy custom of your request (anything within reason and my capabilities) and I'll mail it to you.

Dave Parker was playing in his first All-Star Game in 1977, hosted by the Yankees that year. He ran into an issue. You guessed it; he forgot to bring his batting helmet and wore a Padres helmet for all 3 plate appearances. 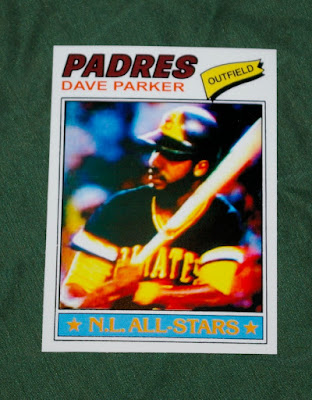 Man, I would have loved to have prime-years Cobra actually playing for the Padres! But this is as close as it ever got. Oh well, it's something!
There's little question as to whose helmet that is. Dave Winfield was the lone representative for San Diego that year. Just a couple of Daves sharing a hat. This card could have been included in a theoretical 1977 Topps Update set, if such a thing existed back then.

Jumping ahead a few years, Marquis Grissom was selected for his first All-Star Game in 1993, and you probably see where this is going. Yep, he forgot his Expos shit! He had to cobble a uniform together by borrowing a Padres jacket from Tony Gwynn, Cubs pants from Mark Grace, and an Expos cap from a souvenir stand at the stadium. 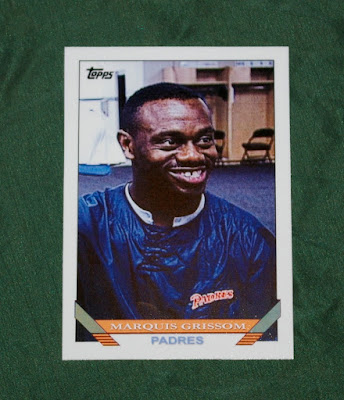 Again, these are all real images in this post. Luckily his Expos uniform made it in time for the game, but he looked a bit silly during the pre-game festivities. Grissom played for a lot of teams in his fine career, though the Padres were not one of them. Too bad; I'm a fan (see my Marquis Mania project) and would have enjoyed him being a Friar. At least now I've got this custom forever claiming him as a Padre, deceptive though it may be.

Ready for the next one?

"Padre Pete Rose" has a nice ring to it. Charlie Hustle never played for San Diego, but he has been photographed in a San Diego hat more than once. And so it was my duty to preserve these pictures on cardboard!

When Pete became a free agent after the 1978 season, Sports Illustrated ran a piece speculating where he might end up. They did a photoshoot with him trying on several caps of teams he could potentially sign with. Spoiler alert: he went with the Phillies. But for the sake of imagination, let's say Pete did go to the Padres in 1979. 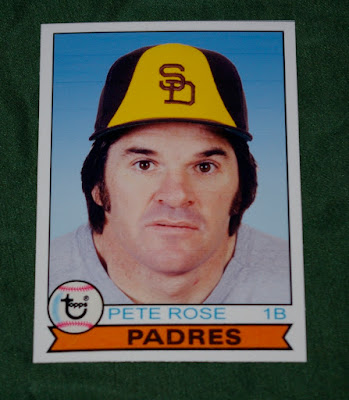 Not a bad looking card! Pete would have likely been a good fit for the Padres of the time, but they wouldn't offer him a contract of more than a couple years. I'm not exactly sure from where this image is originally sourced, however, because while obviously from the same shoot (I added the blue background), the Padres picture in the article features Pete goofing around by pretending to eat a hamburger. That gave me the idea to make a "Burger King variation" of this 1979 Topps card: 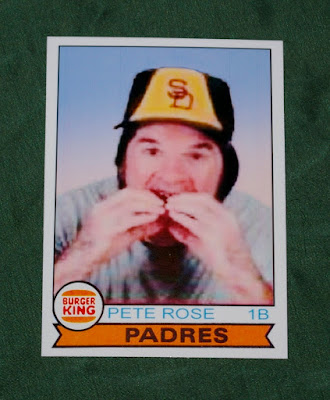 LOL, I thought this was a pretty funny custom, though I'll admit it has some things wrong with it. First off, the picture is poor quality (Any of you guys out there have a Sports Illustrated back issue collection, and could check the November 6, 1978 issue for the Rose piece and get a hi-res scan of it to send me? I'd love to reprint this one with a better quality picture.) Secondly, you 70s Topps aficionados out there are aware that the 1979 Burger King cards didn't have the Burger King logo (unlike the 1980 versions), but instead used the same Topps logo as the flagship set. Really the only way you can tell the BK variations apart is the different numbering on the back, though a few cards have alternate photos. Oh, and only the Yankees and Phillies had BK cards this year (and yes, Rose is featured in the Phillies set; his first Topps card with the team.) The final thing "off" to mention about this custom is that the reason Pete was doing the "eating a hamburger" shtick is because the Padres were owned by Ray Kroc at the time, the businessman behind the rise of McDonald's. So this picture on a Burger King card is... well, it's just bananas! Still though, I think I get points for the effort.

There's another, more legit example of Rose in a San Diego cap. Going back to his minor league days, Rose was featured in the official program for the PCL Padres' 1962 season. They were an affiliate of the Reds at the time, and it seems Rose was expected to play for them that year, though the Cincinnati brass apparently changed their minds and decided to dispatch him to Macon instead. He never had the chance to take the field for the Padres, beginning the following season with the big league club. 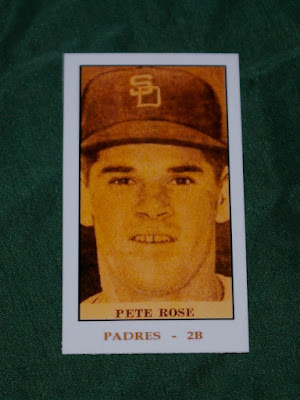 But here's a custom mini using the photo from the souvenir program. Again, not a photoshop job other than the added "PADRES - 2B" text.

At least in my card collection, Pete Rose is now an honorary Padre! It's fun to pretend he and the rest of these excellent ballplayers suited up for my team, even with only a sliver of truth behind it. 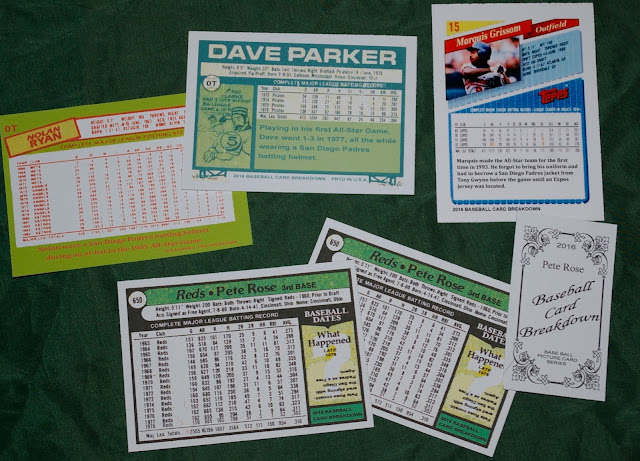 I didn't spend too much time on the backs, but I still can't bare to leave them as "blank backs".. I'm too much of a backs guy to leave them "unfinished" like that. But yeah, these are mostly just replicas of the real backs but with new blurbs. You can click on the picture to enlarge if you're interested.

That's all for today. Thanks for stopping by!

UPDATE: Mark Hoyle correctly guessed Steve Garvey was the player to lend Nolan his helmet. The Padres were well represented at the All-Star Game that year, coming off their pennant winning season of 1984. However, nearly all of them were left-handed batters, therefore the earflap would be on the wrong side for righty Nolan. The only Padre righties were Garvey and starting pitcher LaMarr Hoyt (Switch-hitter Garry Templeton wore a flapless helmet). If you carefully watch the YouTube video of the game, you'll notice there's a white splotch on the bill of Garvey's helmet, and that same splotch can be identified when Nolan digs in.
Posted by defgav at 2:09 PM