An exciting new Guy From Granite

Less than a month after discovering new Guy From Granite Brian Carroll, I've found out about another guy from my high school currently playing pro ball. This guy seems to be on the cusp of a call-up, even!

His name is Travis Taijeron and he's currently raking for the Mets' AAA club. Remember a week or two ago when Yoenis Cespedes hit 3 home runs in a game for the Mets? Taijeron also hit 3 that day down on the farm! 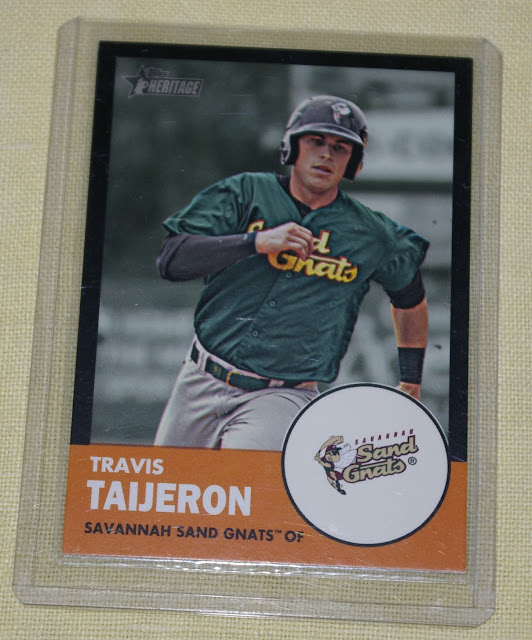 
For some reason baseball-reference doesn't have his high school listed, and since searching b-r is pretty much my only "research" for this minicollection, he wasn't on my radar. But I recently began following the coach for Granite Hills baseball on Twitter, and he's really good about retweeting when his former players do well. And Taijeron has been blowing up on his feed, so that got my attention.

Travis only has a couple mainstream cards on the market so far: 2012 Topps Heritage Minors and 2012 Topps Pro Debut. Also a few minor league cards. No certified autos yet.

Here's what I've scored so far: 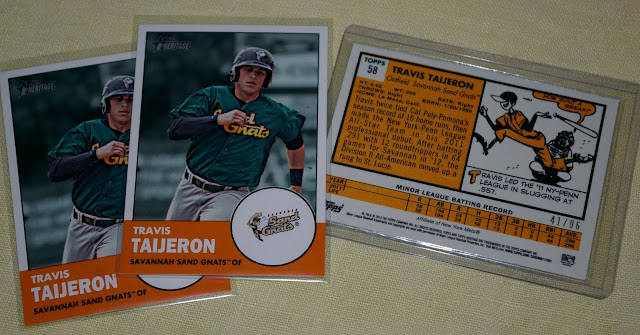 2012 Topps Heritage Minors #'d 41/96 black parallel shown up top and a couple base cards. I got an extra base card with the intent of trying for a TTM. But with the AAA season ending soon, and the possibility of a September call up, it might be tricky timing.

But yeah, cool to have another active guy in this minicollection of mine! Here's hoping he gets called up and has some major league success soon.
Posted by defgav at 1:46 PM