When my Gint-a-Cuffs adventure left off, I had incredibly ripped half of the hobby box without pulling any of my promised 3 hits. Still, I managed to rack up a respectable number of points. The Commissioner's ruling on Starting Points inserts went along with my assumptions, so my tentative running total of 76 stands.
Let's pick it up where I left off. 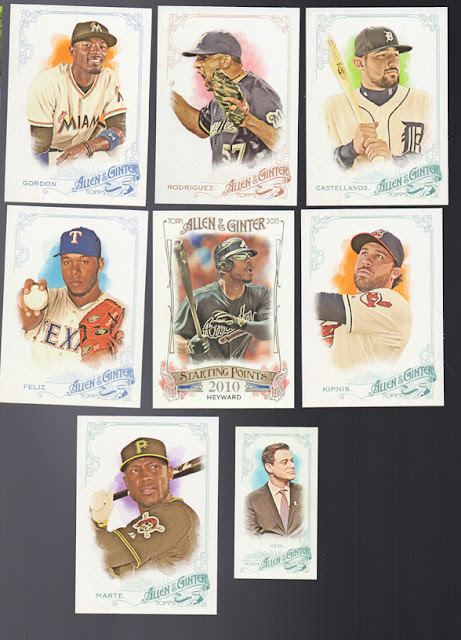 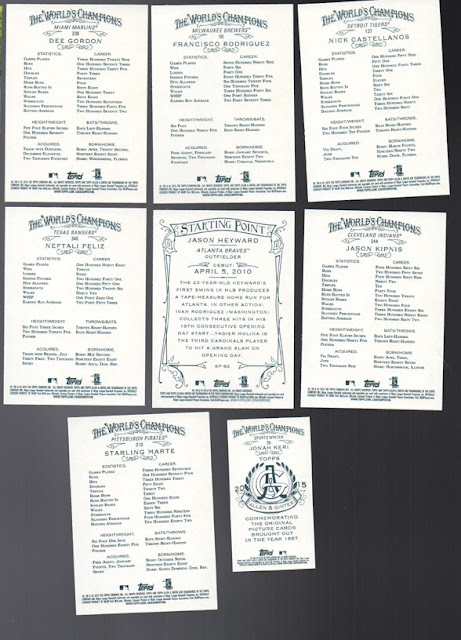 Nothing too notable here, but netted me a few points. 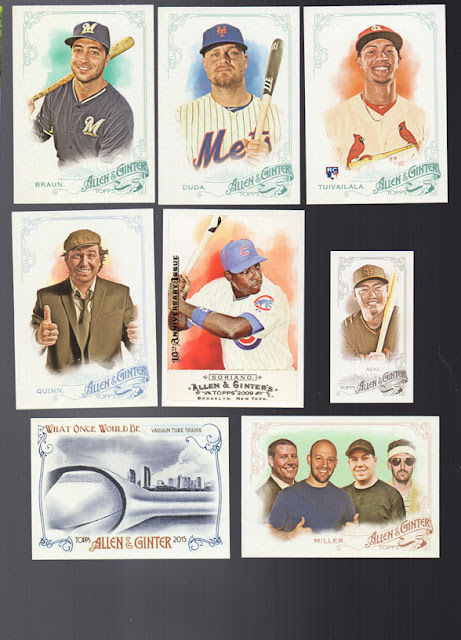 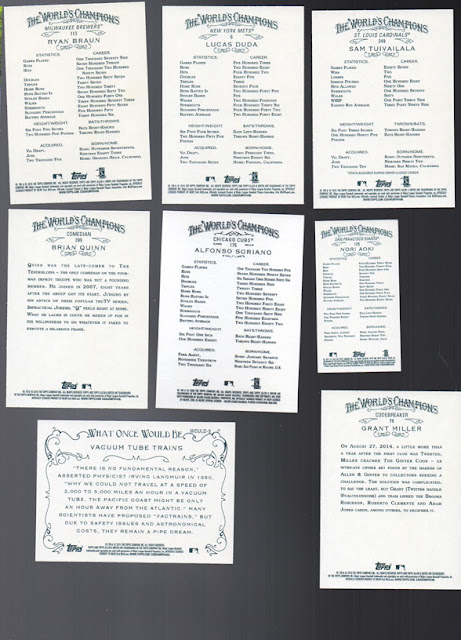 Never before in my life have I opened a pack of cards with this much thumbs-up action going on.
Soriano buyback.. not as cool as the Thome from last time, but could be worse. 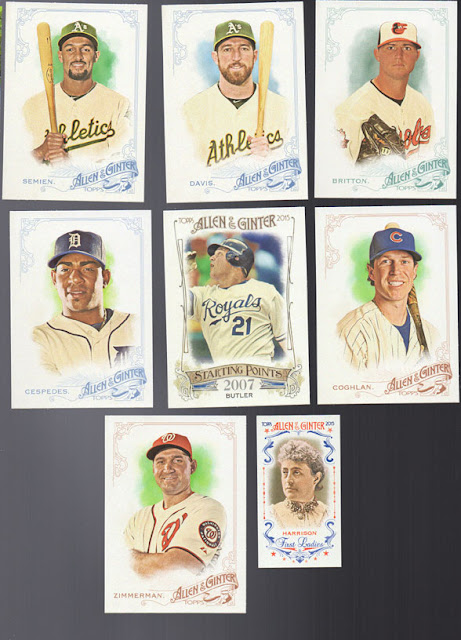 The first First Lady card of the box, Caroline Harrison. 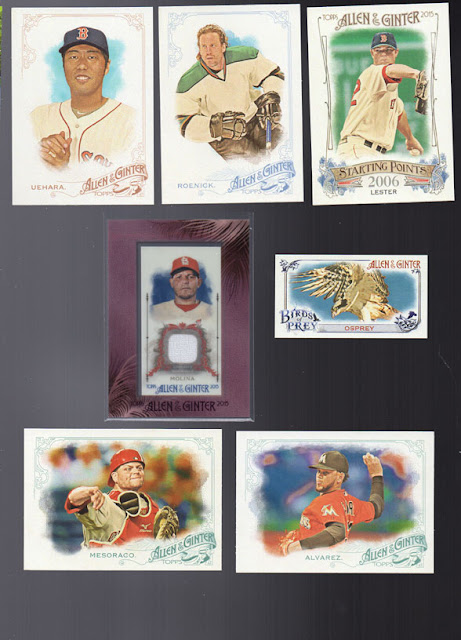 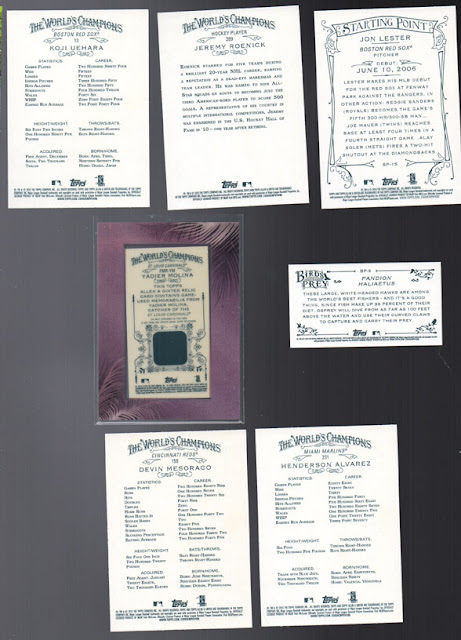 Finally a hit! Wow, took till the 16th pack. Yadier Molina is a decent pull. Also nets me bonus points because he's on the Favorite Players list. 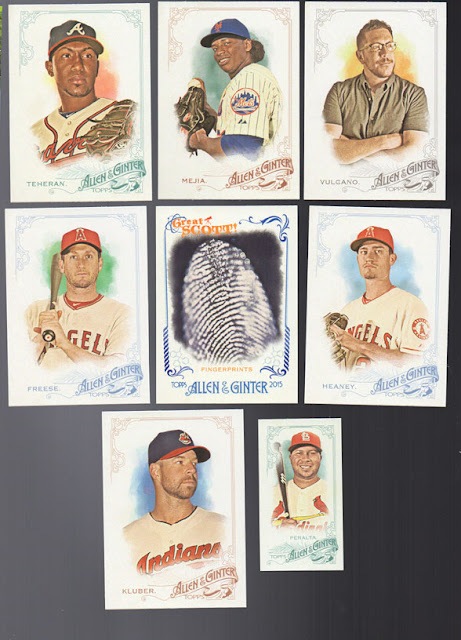 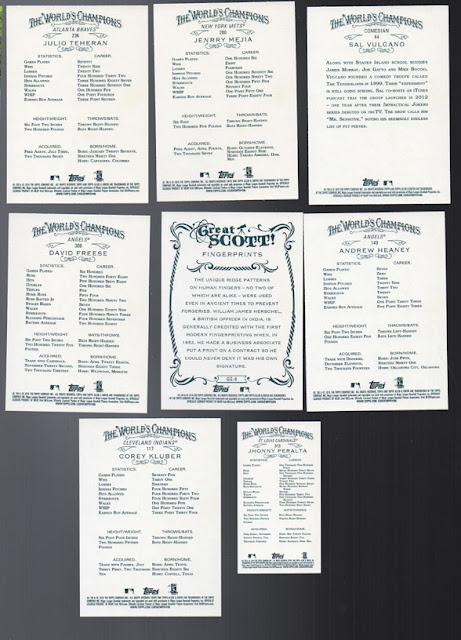 Jhonny is the first SP of the box. 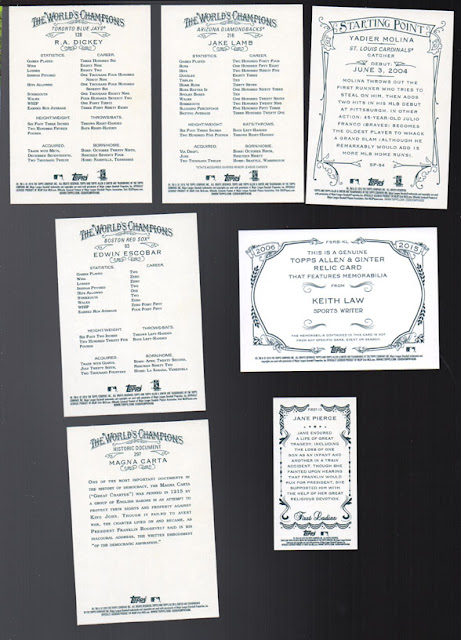 Here's the second hit of the box. As far as celebrity/personality hits, Keith Law would be somewhere in the middle.. could be better, could be worse. At least I've vaguely heard of the guy, and the relic piece is nice and interesting as far as swatches go. 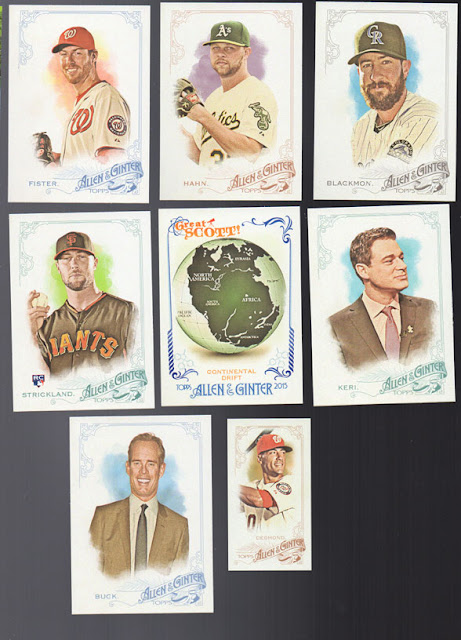 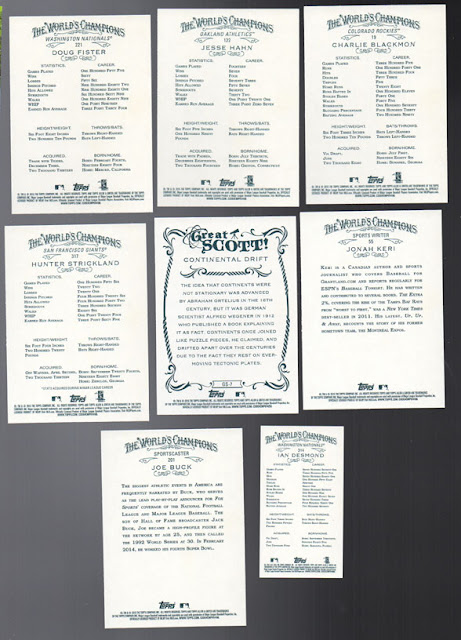 I really don't care for Joe "Jimmy Neutron" Buck. I applaud Topps for obviously photoshopping his forehead to proportions that no human head could possibly support. Kudos, Topps! Good to know you have a sense of humor. That card is simply ridiculous! Elle Oh Elle. 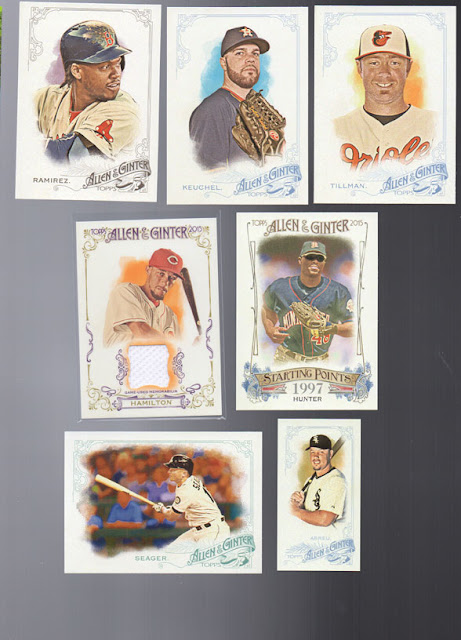 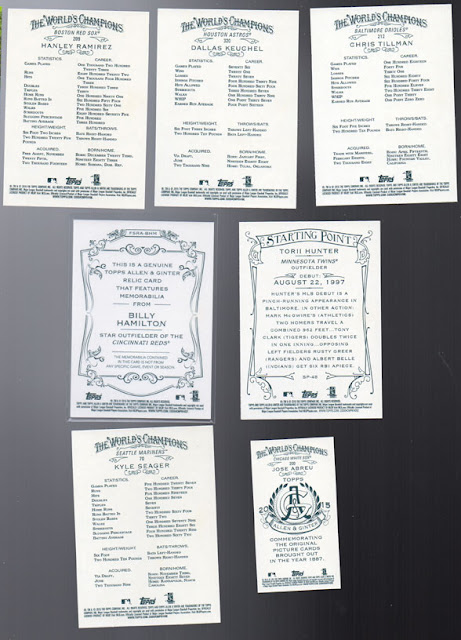 And here's the third and final hit of the box. While I was a bit disappointed to not land an auto (or rip card, printing plate, wood card, metal card, etc etc etc), at least I like Billy Hamilton alright.. an exciting young speedster whose career could really take off if he could just get on base a little more often (Alex Cole syndrome?). Infinitely better than an Impractical Jokers relic or crap like that. So yeah, I'm happy with that pull. 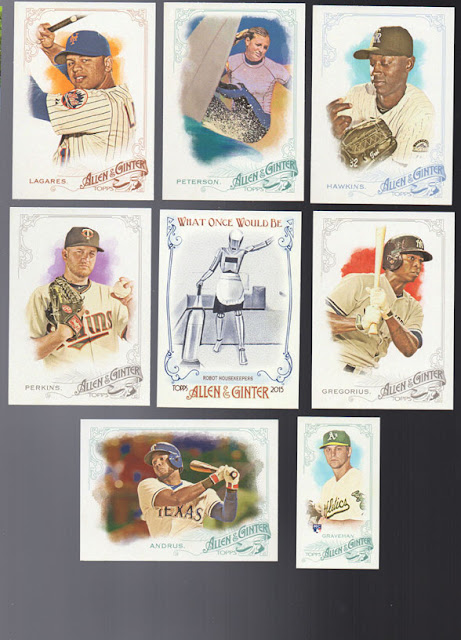 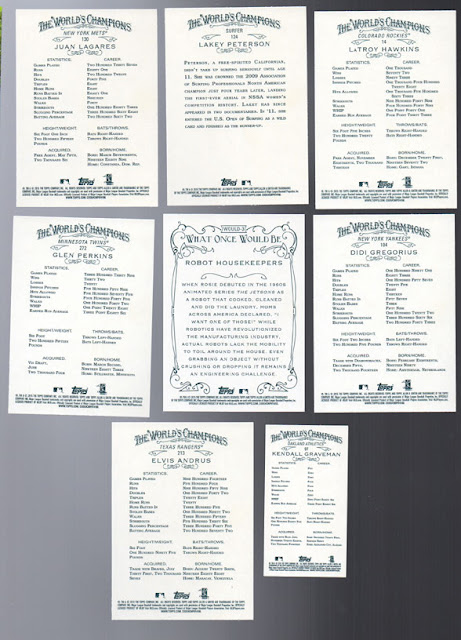 Ouch! A surfer lady, but not much else here. I think one point is my lowest scoring pack of the entire box. 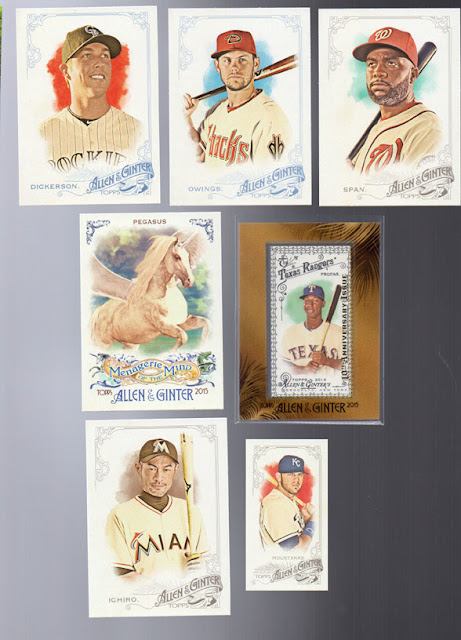 I believe every box has one framed mini buyback. Mine was a decent one, with a black bordered Jurickson Profar from way back in 2014 (Note to Topps: please chill out on the buybacks next year). If next year he can rebound from the injury that caused him to miss this season, this could end up being a pretty sweet card. Checking eBay, there are zero similar cards to this either in the current or completed auctions, so this very well may be a "1/1" for all intents and purposes. Judson, do you want this? Otherwise, I'll hang onto it and cross my fingers Profar comes back strong in 2016.

+4 Mini Topps A&G Buyback 1:24
+3 Black-Bordered mini (I'm taking the points for being a black bordered mini, though technically the rules on this aren't pertaining to buybacks. The Commissioner can overrule me here if he desires and award me more or less points as he sees fit.)
+2 Menagerie of the Mind
9 pack total
150.6 running total 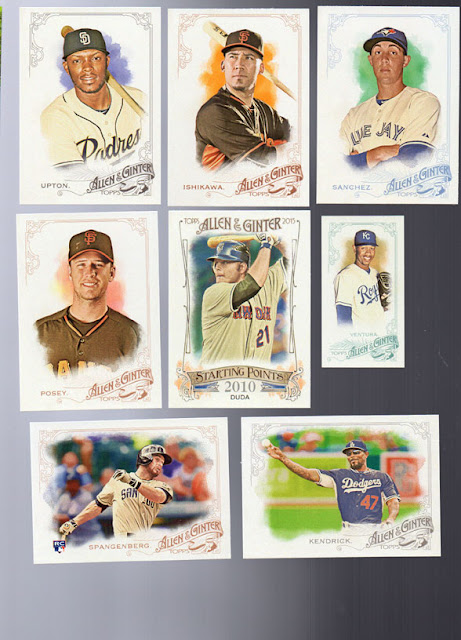 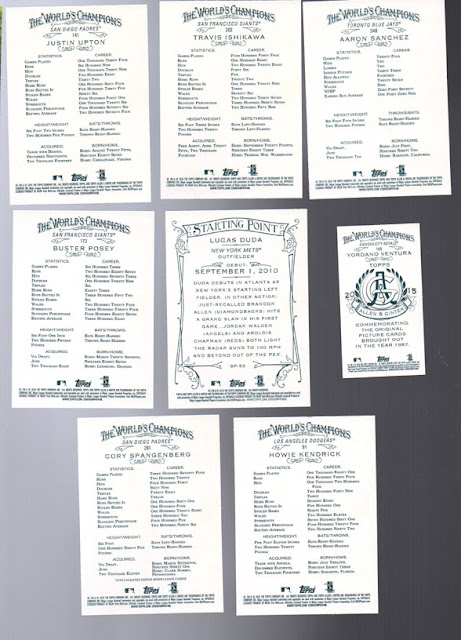 The Padres (favorite team) drought ends in a big way. This was a "San" teams hot pack. Two SF fans are playing GAC this year and neither picked Posey as their favorite player, cruelly robbing me of a couple points. 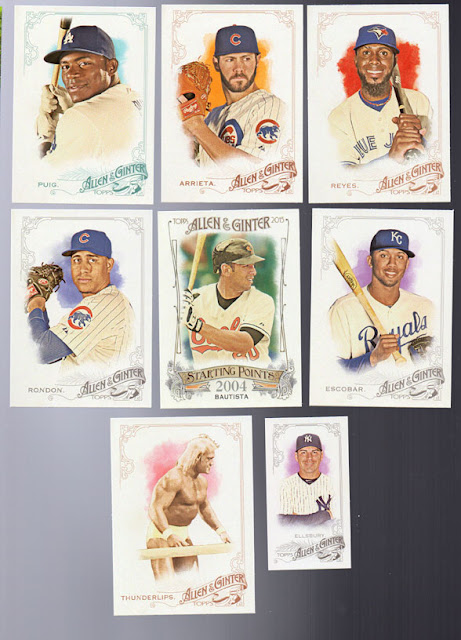 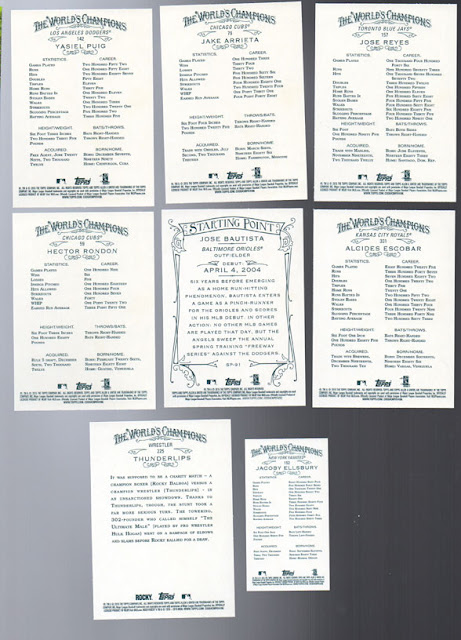 Final card of the box was "Thunderlips" Hulk Hogan. Would have been a cooler card were it not for his racist sex tape or whatever that made the news last month.


There you have it 159.6 is my grand total unless I messed up anything (let me know in the comments if so, please). While not an incredible score, I'm at least in the thick of the race, as far as I can tell from the other Gint-a-Cuffs posts I've read out there so far. As long as no one pulls a mega sick mojo hit, I might have a shot at a place on the podium. With a whopping 3 boxes graciously supplied by Topps as prizes this year, I wonder if the first, second, and third place finishers will each win a box? Maybe the last-place finisher deserves one most of all. 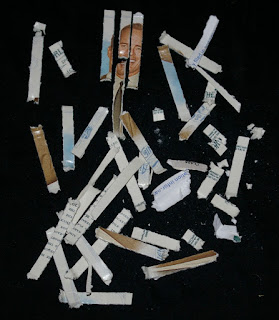 Putting a baseball card in the shredder was a rewarding feeling. Suck on that, Bucknut.

Anyways, as with part one, the majority of these cards are available for trade, so get in touch if you wanna work something out.

Thanks for reading and I'll see ya later.
Posted by defgav at 3:53 PM