The "joy" is somewhat muted when you just buy the complete set in one shot on eBay, but it still counts. Right? Kinda? I had a saved search for this for a while, and after a few tries, landed one in the price range I had in mind.

I'm a nut for all things Archives Reserve. Just something about refractor reprints of vintage cards that clicks with me and triggers the "Aw yeah, that's what I'm talkin' 'bout!" sensors of my brain.

This latest pickup completes the AR trilogy for me, with 2001 Archives Reserve Football joining the pair of baseball sets from 2001 and 2002 (which I've previously featured here and here).
Here's the football set in its 94-card entirety: 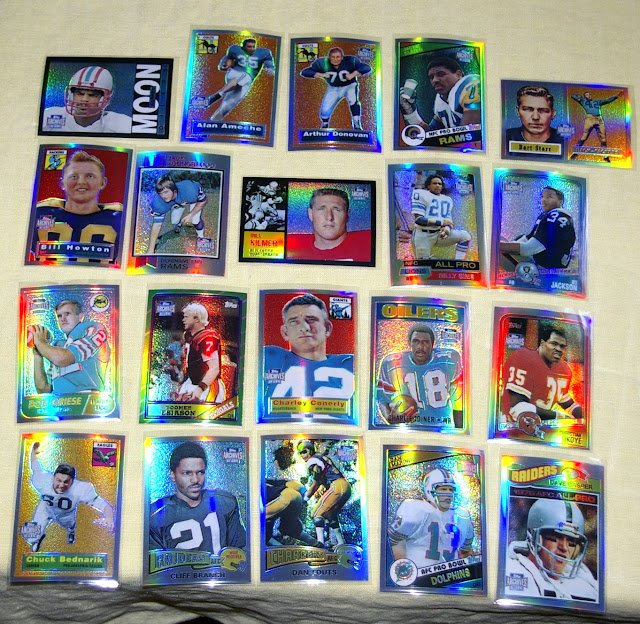 The set is somewhat in order by first name. Not all of them (Warren Moon at #1?), but the bulk of the set is in alphabetical order. Just something weird I noticed while going through the cards. 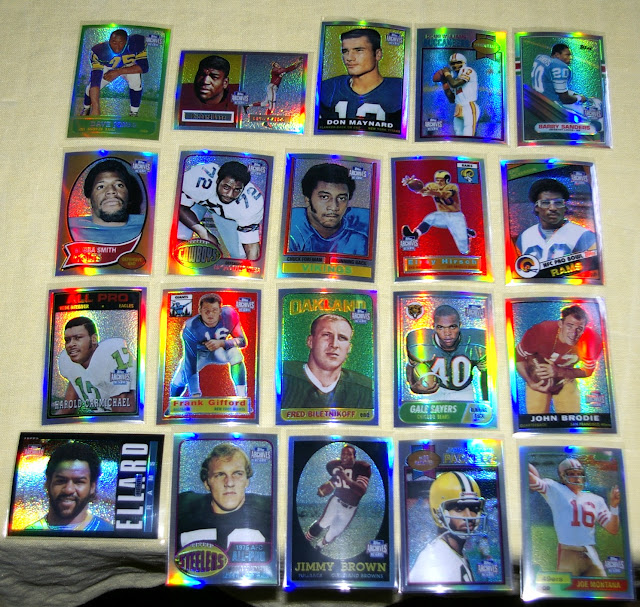 I'm no aficionado when it comes to vintage football, but I'm familiar with some of the bigger cards, such as the Jim Brown and Joe Montana. 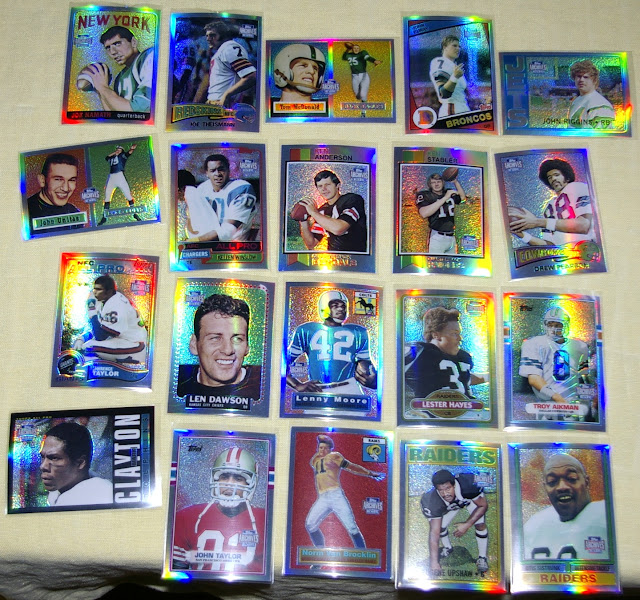 The John Elway RC is the only card in the set that I own a real copy of, I believe. My copy unfortunately has one of those "fish eye" bubble printing flaws right between his eyes.. sort of takes away a bit of the eye appeal, but still cool to have one. 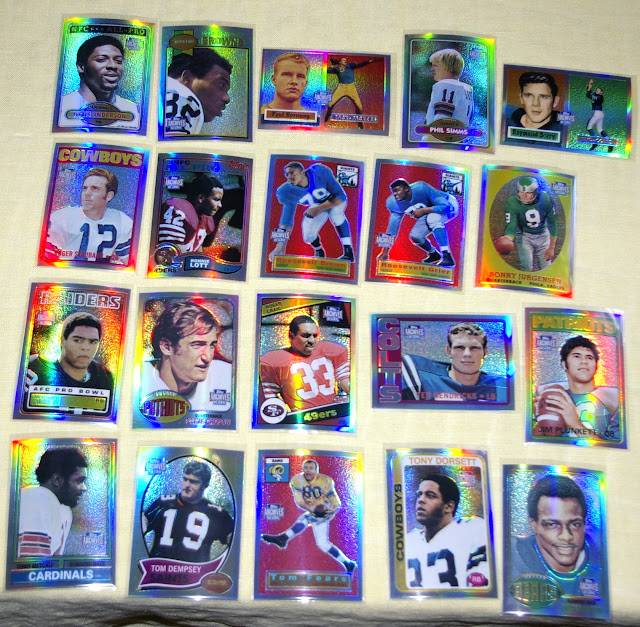 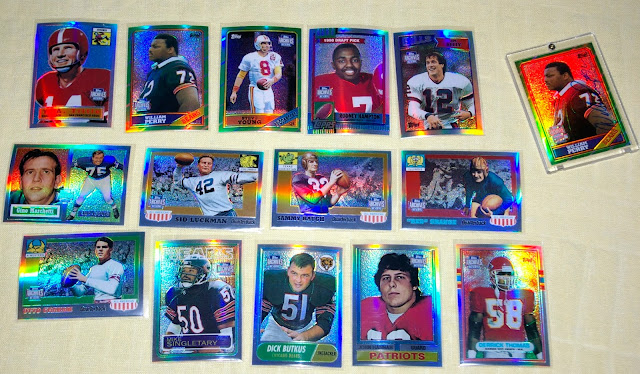 That wraps it up. 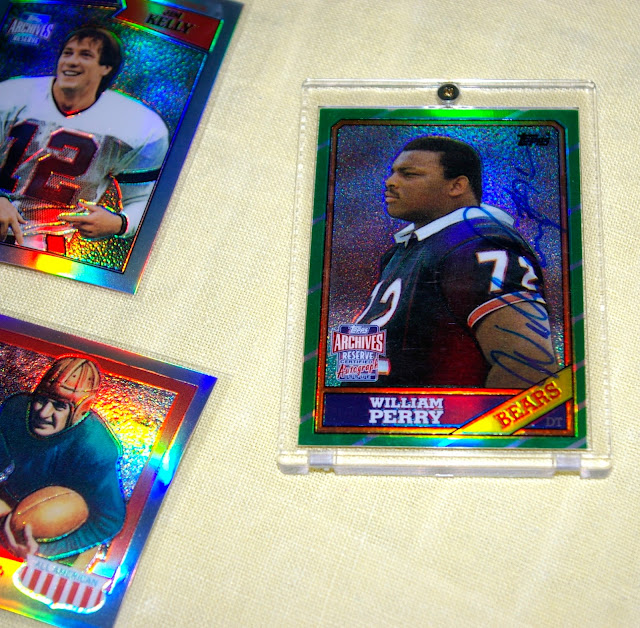 As an appendix, here's the Fridge auto I got a few months ago.

Now that I've completed the trilogy of base sets, my Archives Reserve Master Set is pretty much just lacking autos and relics. I'm in no hurry on those, but it would be nice to eventually get 'em all.
For fun, let's check out the checklist for 2001 Archives Reserve Football inserts:

Some big names there! That'll cost me a pretty penny should I seriously try to complete it someday. Again, no rush.

There are apparently also 21 "Mini Helmet Autographs" but I'm not counting those as I only care about cards. Though I suppose it wouldn't be a truly complete "Master Set" without them. Grr. Cross that bridge if I come to it.

If I had to prioritize my Archive Reserve wants now, the football insert stuff would be last, with the baseball relics and autos being above that. And probably next up to focus on is the 20-card 2001 Topps Archives Reserve Future Rookie Reprints.. that stepchild of Archives Reserve which aren't even refractors. Still, though, if it says "Archives Reserve" on it, I want it!

I recently got a couple more of them in a Sportlots order.. or so I thought. 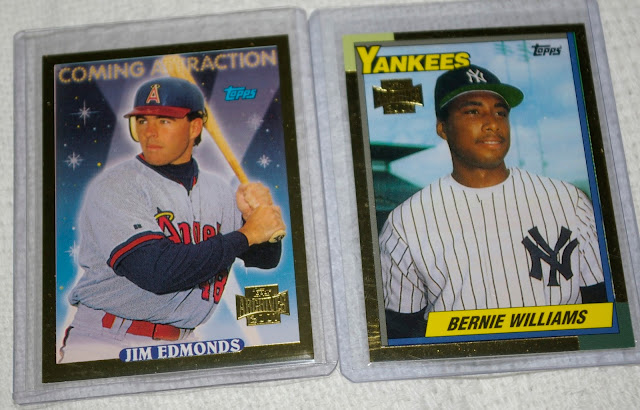 A good look at the Archives logo tells you these are not the rarer Archives Reserve versions, just the regular Archives versions. Nuts! They weren't too expensive so I probably won't hassle with a refund/return. But man, frustrating! (Especially after the fake Mike Schmidt RC that arrived the other day.) Serves me right for going after a dumb and confusing insert set like this. Anybody want to trade for either of these two cards?

Here's where I'm at with the checklist now:

Thanks for stopping by.
Posted by defgav at 5:09 PM