Way back on June 20th, I pre-ordered a hobby box of 2015 Allen & Ginter from a guy on eBay for the low price of $72 shipped. These things typically run closer to $99, so that was a pretty sweet deal, I'd say. The downside to that is it just arrived on July 30.. which seems like an eternity after the street date (in reality, it's only about a week later). But I'm ok with the wait because I didn't want to open it until after the Gint-a-Cuffs rules were announced and the game had begunt. 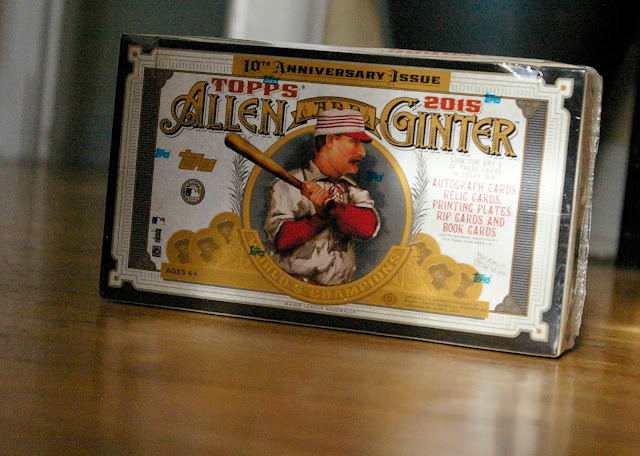 And that time has come. So let's go! I don't think I'm going to stretch this out into multiple posts, so let's just bust this all out right here, right now. Doing it all in one post may have been biting off a bit too much; let's split it down the middle into 2 posts.

Let me first say I've never been a huge A&G fan. Apart from a blaster last year, this is the first time I've bought any Ginter. I'll admit 2014 had an appealing design, but I was a bit disappointed this year by what I've seen on the blogs so far. The "chickenpox" effect on several of the subjects is a terrible fail by Topps' design and QA departments. How did they see the proofs and "ok" it without fixing that?? They were obviously trying to give the photos a vintage look (I believe the effect is called color halftone), but they botched the execution. Really ruins several of the cards in the set, if you ask me. 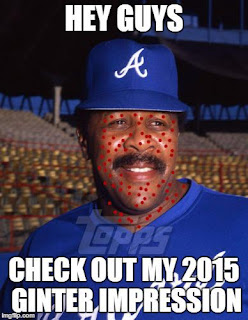 And like last year, several "personalities" are included who most collectors haven't heard of before.. or worse, have heard of before and don't like. Dudes like Vin Scully and Bob Uecker are nowhere to be found. Instead of beloved actor Bill Murray, we get James Murray, some asshole from a prank show. Gee, thanks, Topps.. you really have your finger on the pulse.

But these complaints aside, I'm excited to be competing in Gint-a-Cuffs for the first time. Hopefully I'll have some beginner's luck and pull something awesome. The rules are a little confusing, and again, this is my first GAC, so please correct me in the comments if I mess up anything.

I'm also going to try to come up with a "playlist" for this post by picking a song inspired by each pack. You can play along and try to "crack the code" as to why I chose each particular song. 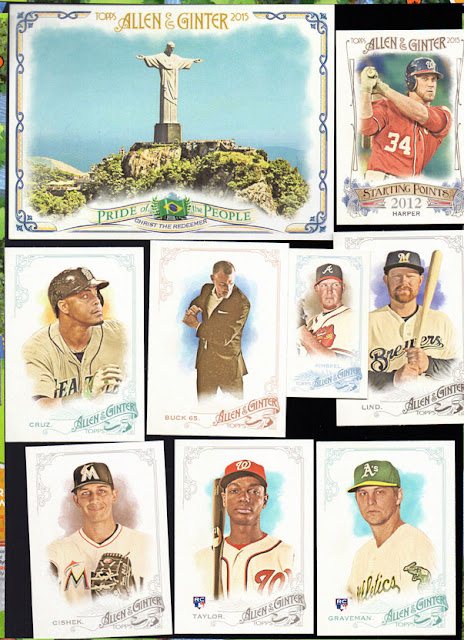 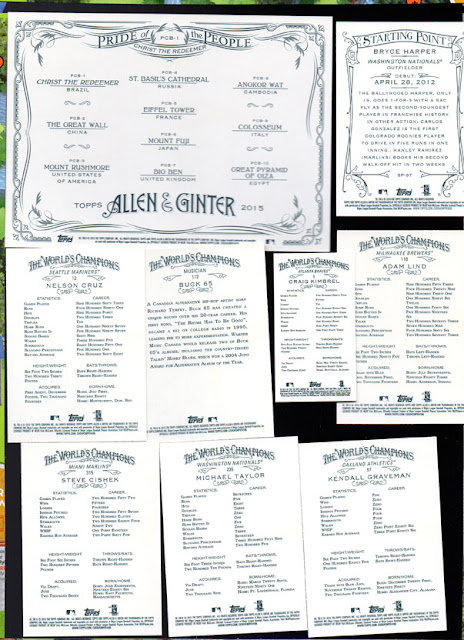 Hey, first guy out of the box is probably the biggest name in the world, none other than Jesus Christ himself! Too bad this wasn't an auto/relic boxloader or it'd be worth billions. Still, a nice looking oversized card. I'll have to find this a home with someone more pious than myself.

As for Pack 1, Harper is a PC hit for me. Sucks that Kimbrel is pictured as a Brave (come on, Topps! He was traded before the season began. How long is the lead time for this?) If he were correctly updated to a Padre, it would have been points for me (fav team = Padres), but alas. But he's another Gint-a-Cuffs contestant's favorite player, though, so that's something! 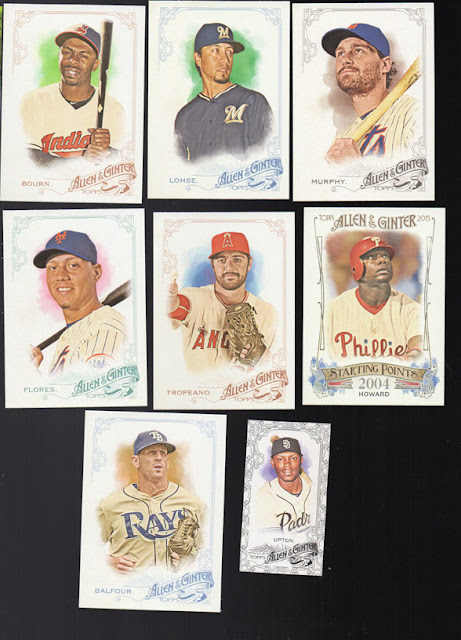 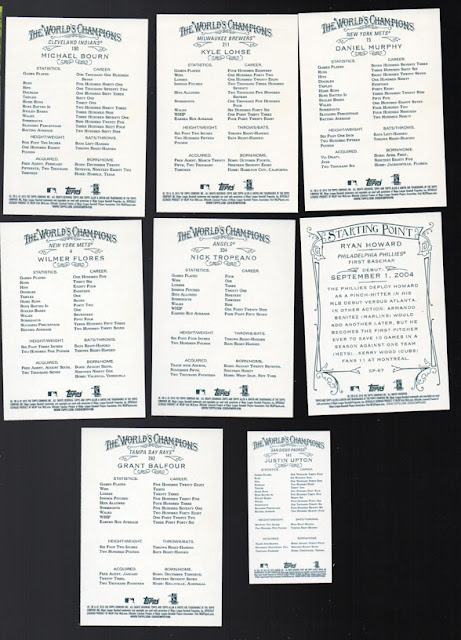 Black bordered Padre mini! That's a few points for me.

+3 Black-Bordered 1:10
+1 Mini of player on your favorite team
+2 Starting Points 1:2
+2 Other Favorite Player list base card (Howard) (I'm assuming this bonus applies to inserts as well as base cards, however, this is pending clarification with the Commissioner.)
8 pack total
18 running total 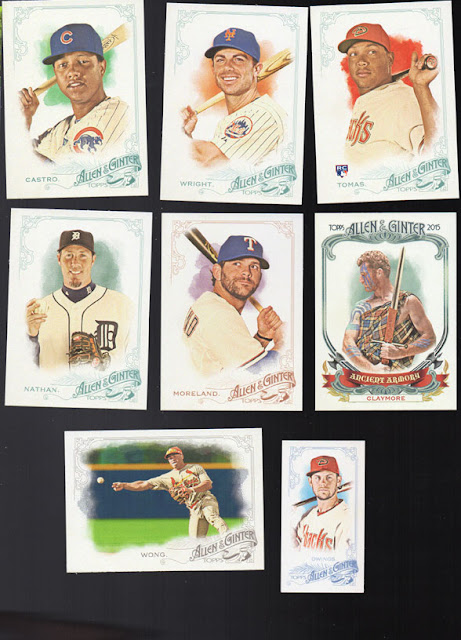 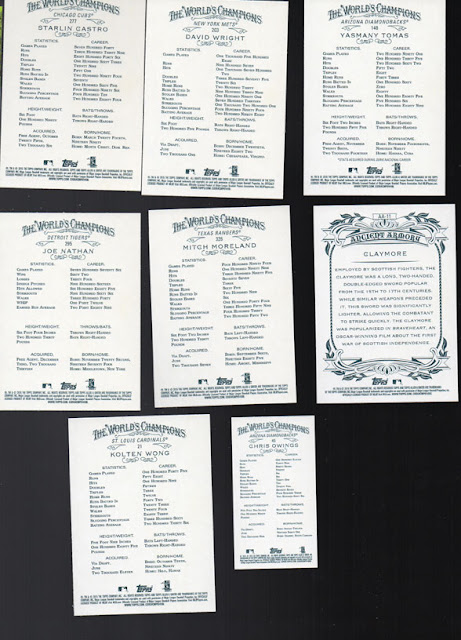 David Wright is Spankee's fav player. And Tomas is kinda cool. I like that this pack had a Wright and a Wong. That's silly. 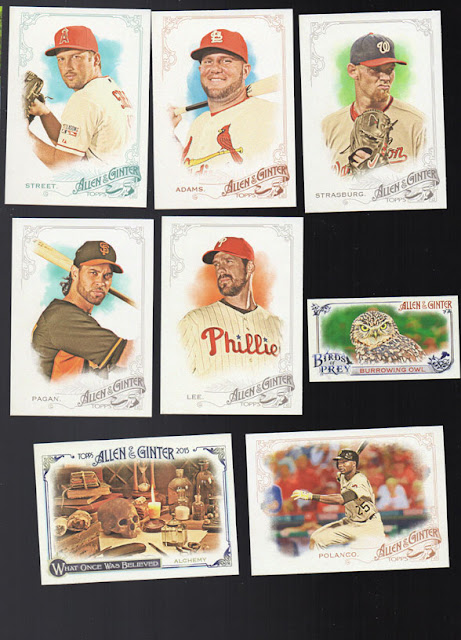 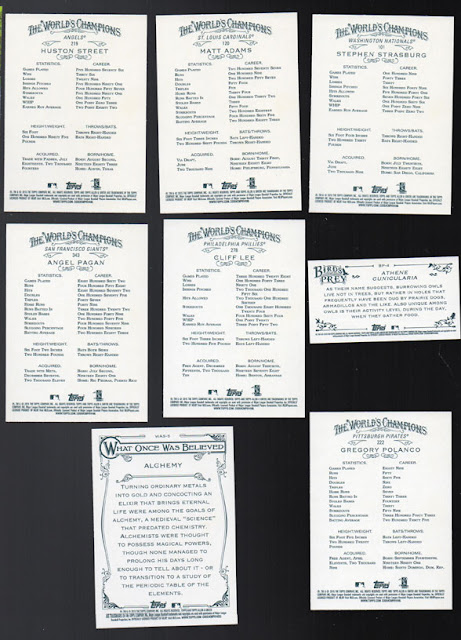 Strasburg is a PC guy. The burrowing owl card is kinda neat. 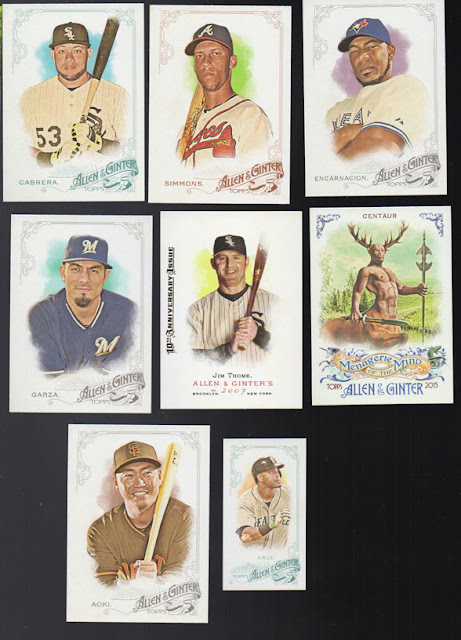 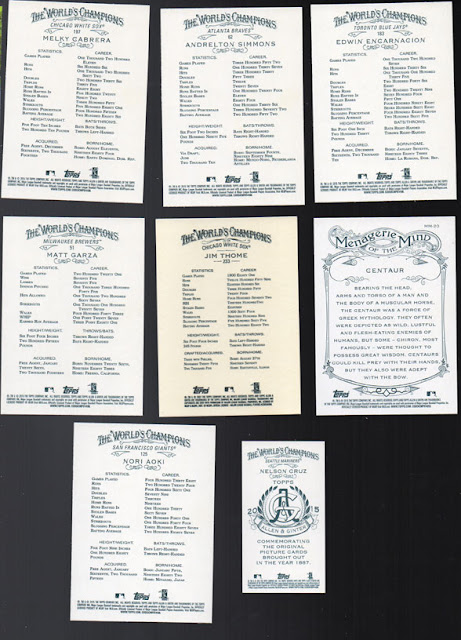 I'm generally unimpressed with buybacks, but that stamped Thome is pretty cool. Probably my favorite card of the box so far. I'm happy it's a highly-regarded player, plus from a year where the design doesn't interfere with the stamp.
The Nelson Cruz mini seems to be a no-number, which scores me a few points. 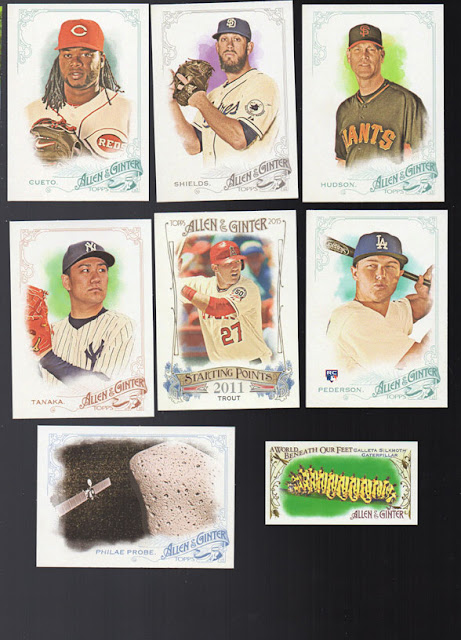 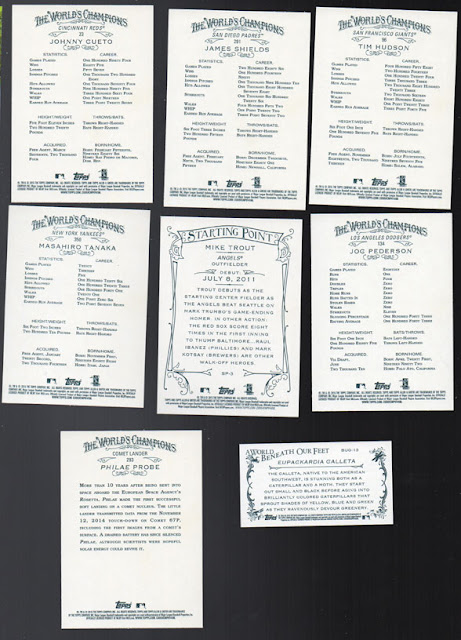 Here's an eventful pack, with the first Yankee of the box (minus points), but my "fav player" Trout and James Shields from my fav team scoring me points. Yeah, I felt a little guilty picking a favorite player not from my favorite team, but as far Padres, the frontrunner was Wil Myers, but I couldn't in good conscious call him my favorite player. So I picked the guy I'd be most excited to pull, and I had to go with Trout there, though Goldschmidt or Stanton would probably have worked too. It was also a strategic pick, as I believe Trout has more cards in this product that anyone else. 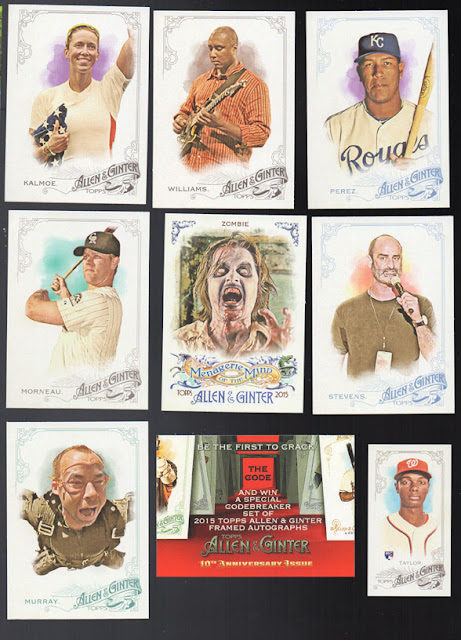 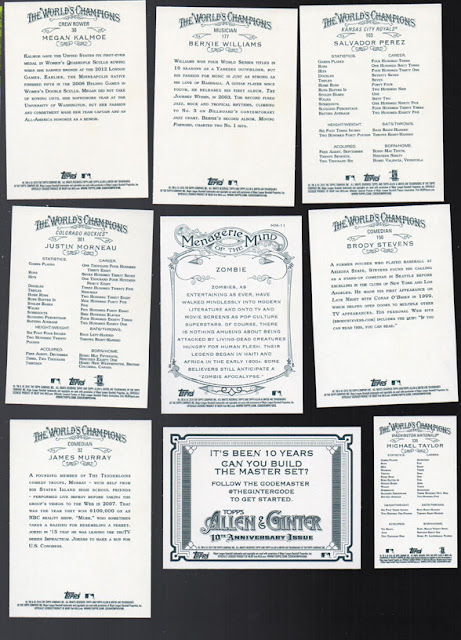 Musician Bernie Williams is cool. Never heard of James Murray prior to his 2015 A&G inclusion, but  I feel confident in saying I don't like him. And Brody Stevens is also a very unlikeable man. I don't like zombies much, either (never watched Walking Dead). 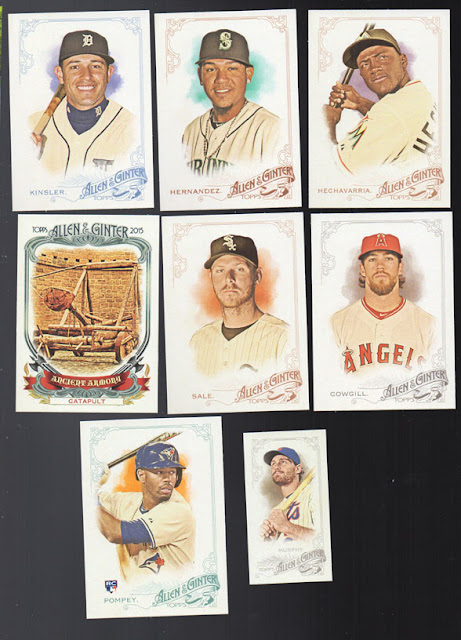 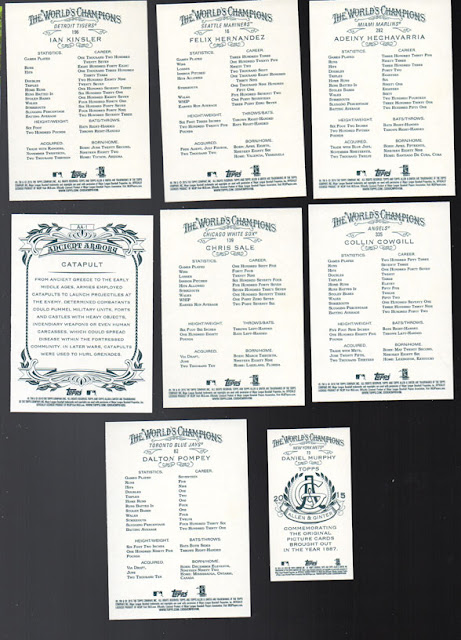 Chris Sale is a PC guy for me, plus Jedi Jeff's fav player, so that's some points. 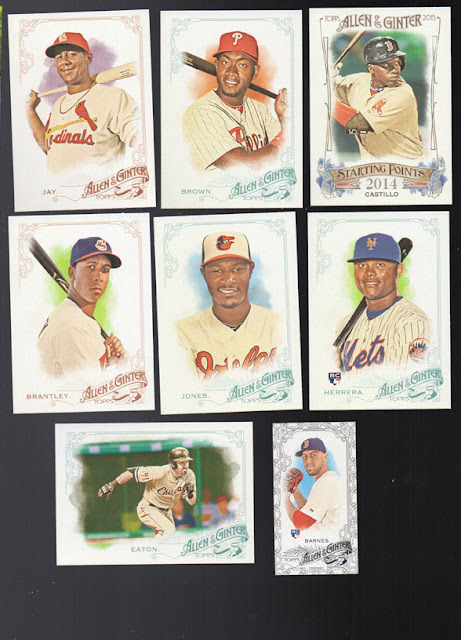 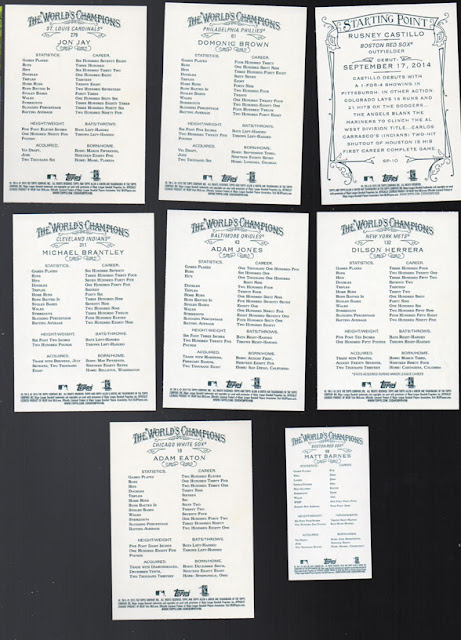 Rusney and a black-border mini highlight this pack. 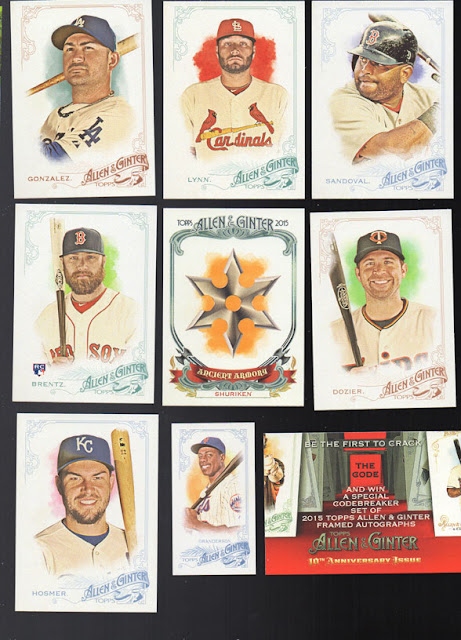 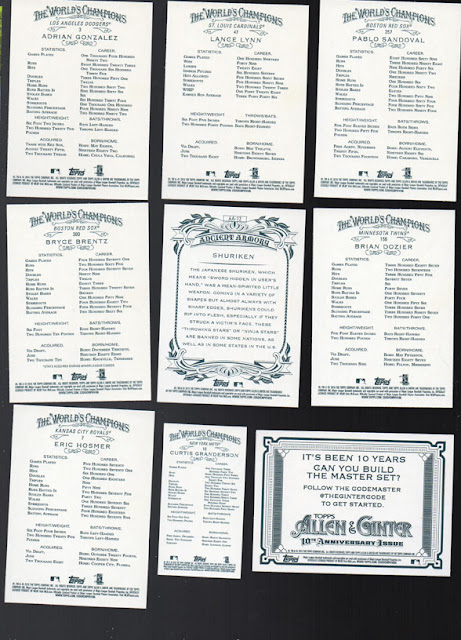 A-gon is a guy I collect. The ninja throwing star is kinda cool. 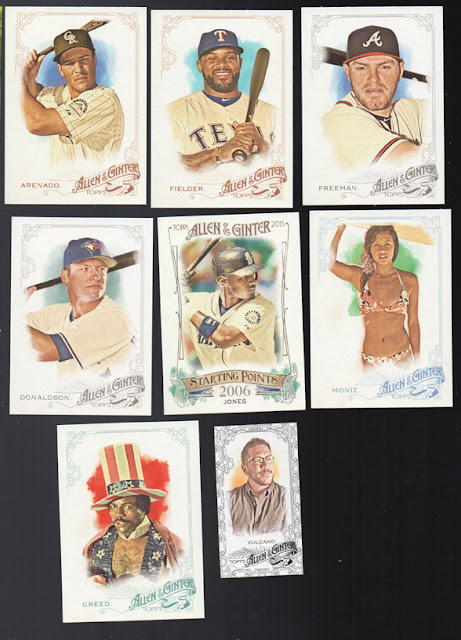 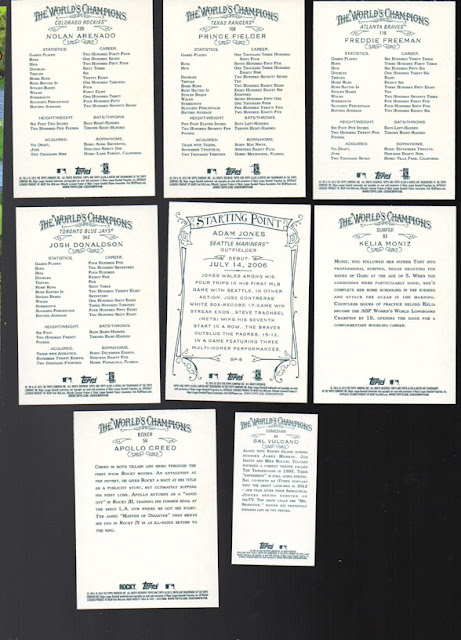 Here's a decent pack with Apollo Creed, a surfer lady, and a black bordered mini. 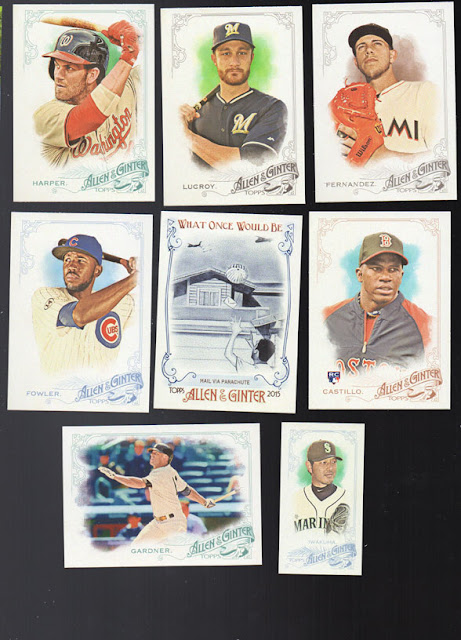 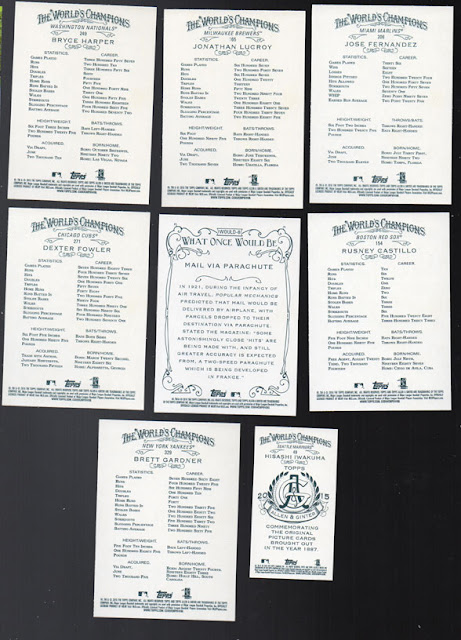 The final pack of the first half of the box nets me a Rusney RC and a Harper.


That's it for today. Did I miss anything? By my calculations, the first half of the box scored me 76 points. This is pending the Commissioner's ruling regarding Starting Points qualifying for Fav Player bonuses.. so we'll have to wait and see if his decision alters my score. (Could possibly drop me to 70.)

So, I'm halfway through now and I've pulled zero of my promised 3 hits per box. Hmm. Let's hope the 2nd half is loaded, elsewise I may have gotten hosed. (Do you think the seller searched the box and removed the hits, hence the cheap price? That would not be cool.) Stay tuned for the thrilling conclusion later this week.

My highest scoring card so far is the Nelson Cruz no-number A&G back mini (8 points).

I will say the "color halftone" screw up hasn't been as bad as the blogs/Twitter have led me to believe it would be. Maybe it's because I haven't been blowing up the size of the scans very large, but none of the cards really jumped out at me as being too bad in that regard. And as far as annoying personalities, really only the "Brody/Murray" pack was bad there, otherwise, nothing too offensive to my delicate sensibilities. So perhaps I should backoff a bit from my preamble stating why I didn't like 2015 A&G. It's been a fine break so far, even though I'm hitless up to this point. (I haven't ripped the rest yet.. probably tomorrow night.) Hopefully Pt. 2 will knock it out of the park. Or perhaps it'll crash and burn in a spectacular crapfest. We'll see.

The majority of these cards are available for trade, so feel free to ask about anything that caught your eye. Catch ya later!
Posted by defgav at 4:02 PM