After getting caught with my pants down without a wantlist for my vintage setbuilding needs at last month's show, I came prepared this time, with a freshly printed-out list for 1965, 1971, and 1973. The good "vintage guy" from the last show wasn't there this time, unfortunately, but my regular go-to dealer had a bunch of vintage mixed in his bins (as I've already featured some vintage Red Sox pickups the other day), so I was able to grab a few needs. 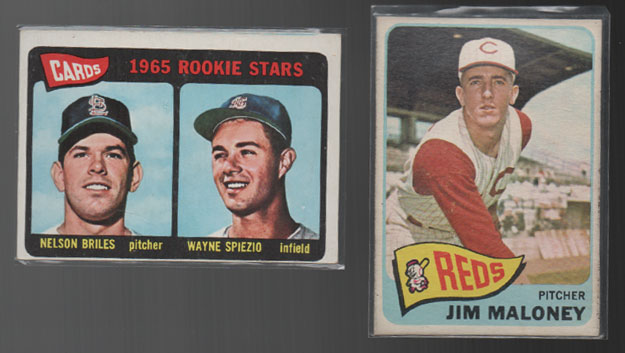 This pair of 65s brings me to 39.83% complete (just 1 card away from an even 40%).
Nelson Briles had a nice career, highlighted by a couple World Series complete games that helped net him a ring with both the '67 Cardinals and '71 Pirates.
Ed (Wayne) Spiezio stuck around for parts of 9 years in the big leagues and was an original Padre.
Jim Maloney is kind of a forgotten name now, but was one of the best pitchers in the game in the mid/late 60s before an achilles injury derailed his career. He had a couple 20-win season and two no-hitters to his credit. 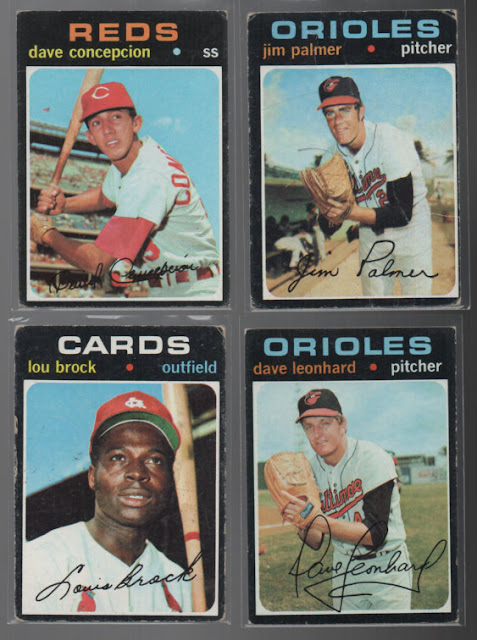 Four 71s. The Dave Concepcion rookie was the lowest-numbered need for me (#14). Now I'm good up through 145, which means I've knocked off the first series, right? Hey, that's something!

Jim Palmer and Lou Brock are a couple nice HOFers to check off the list. Dave Leonhard is a high number (#716), and wow, very similar to the Jim Palmer photo. I'm now at 76.2% complete with this set, breaking past the 3/4 mark with help from last month's card show haul. 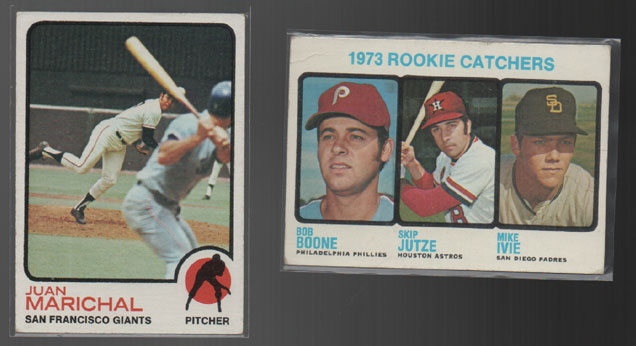 These 2 cards from 1973 get me to the 90% complete mark with that set! The Marichal is a heck of a card. And the Bob Boone RC is pretty sweet as well.

I'm tempted to go on an online shopping spree one of these days to knock out the remaining 10%, but I'll try to have patience and not overpay for cards just because I want to put this set to bed. Maybe I'll finally find that LCS I've heard about yet never stopped in, and see if they can help fill my list. My go-to dealer did have a Schmidt RC under glass that looked pretty sharp. I might need to bring some extra cash to the next show in case it's still there and he can cut me a good deal.

Thanks for stopping by.
Posted by defgav at 4:01 PM