Ready for another Sentimental Sunday? 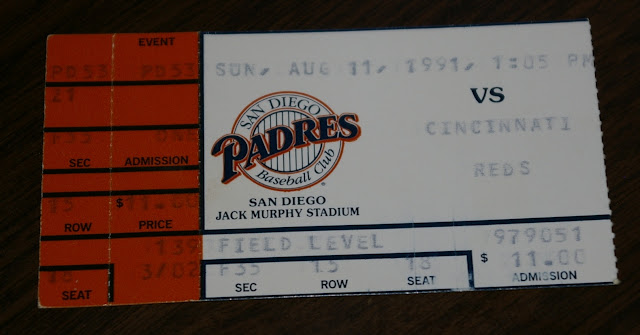 For the 3rd week in a row, it's a Sunday afternoon game. 8/11/91 vs. the Reds. Let's take a look at the boxscore via baseball-reference... Pads won 13-0! The first two stubs I've featured previously triggered no memories for me, which is kinda sad, but my memory is weird with what it chooses to hold onto. But I'm happy to say I do have specific memories of attending a game where Bip Roberts entered Mega-Bip Mode, and that game, my friends, is this one! He was on fire, going 4-4 with 2 home runs and a stolen base. I think Mr. Roberts made a fan for life that day (perhaps a few, in fact).

Bip was definitely the star of the show as soon as he leadoff with a longball, though three other Padres teed off on Reds pitching. Tony Gwynn was 0-5 in a rare display of futility for him. Notable players for Cincinnati my little eyes got to see live that day included Barry Larkin and Paul O'Neill.. not to mention ol' Lou Piniella who was certainly an unhappy camper being on the receiving end of a blowout.

I know I've been to at least a couple more Padres games (once during the final season of the Murph/Q, and once at Petco, oh, and there was a spring training game circa '92), but I'm not sure if those stubs will ever turn up. I'm glad I could finish the 3-part stub recap with a memorable game, at least.

Next is a dumb joke book missing its cover. 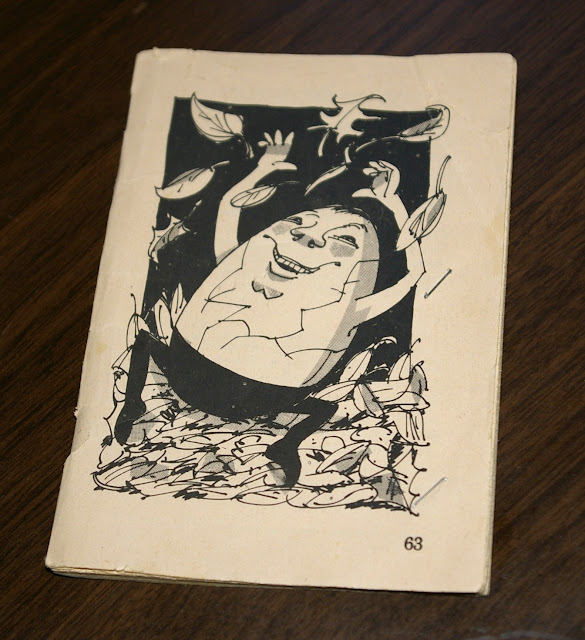 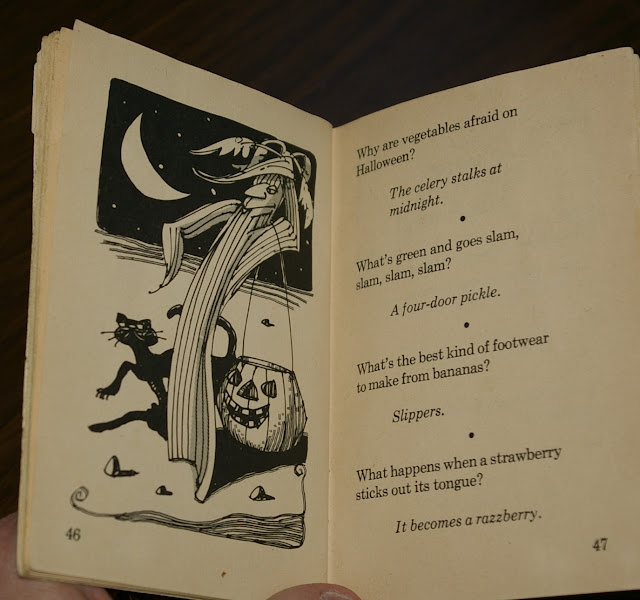 Even as a kid, I think I had enough self-respect not to chuckle at these lame-ass jokes. But I kept this book around for many years, so I guess it must've at least liked it a little. I bet if I read the whole thing today, I could find at least a joke or two that'd crack a smile. Still though, I should toss this. Maybe I'll throw it in as a bonus with a card package to one of you with young kids. 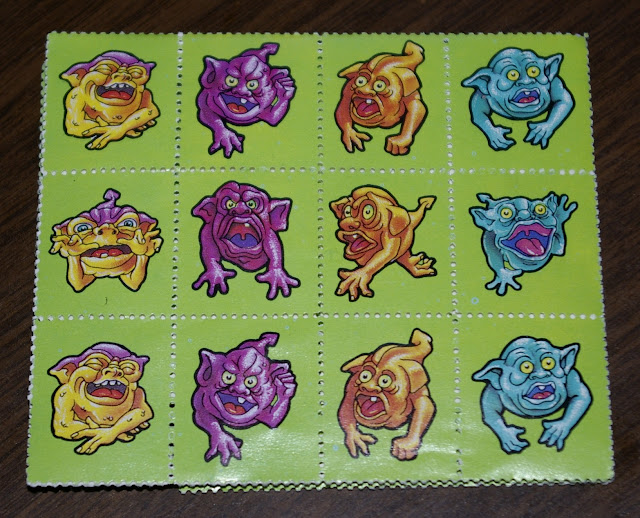 Oh man! Any of you guys remember these things? They were little rubber goblin puppets about the size of a cantaloupe. Googling the phrase "80s goblin toy" tells me these were called Boglins. I don't think I ever actually owned one of them, but in addition to playing with the ones my friends owned, I got by with this sheet of stamps depicting cartoon representations of them. I should find a use for these stamps. Maybe I'll start randomly including one of these stamps in every package of cards I send out. It'll be my signature calling card, like Kevin the Papaboy and his Bieber cards. It'd probably creep out all my trading partners and buyers.
There's a similar but unopened pack of these on eBay with an asking price of $17. Hmm. Maybe I could get a few bucks for these? I'm not really all that attached to them.

Here's a trio of 3 little things to finish out this week's post. 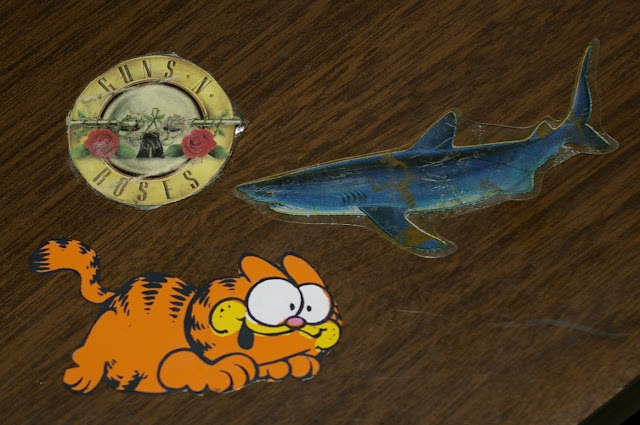 Garfield and the shark are colorforms. I had a few colorform "playsets" when I was a kid, more bits of which will likely pop up in future Sentimental Sunday posts. If you're not familiar with them, they're basically like vinyl "reusable stickers" that you can stick on any smooth surface. The sets would come with a background or two, such as an interior, and you could make a "scene" by sticking the various colorforms on it.

There's some history behind that Guns N' Roses logo. The first "explicit" albums I ever bought as a kid were Appetite For Destruction and Tone Lõc's album with "Funky Cold Medina" and "Wild Thing". I still remember my mom sneakily borrowing them without permission to give a listen to the naughtiness her little boy was being subjected to. How embarrassing! For the most part, she was a very lenient, trusting parent, but that's a rare instance of her being somewhat invasive. I cringe imaging her listening to the middle of "Rocket Queen". She did, however, mention that "Paradise City" wasn't too bad.

Anyways, I believe that logo was cut out of the cassette liner notes. I had it taped to my trapper-keeper like a sticker. Pretty badass, I thought at the time. Eventually the binder fell apart as all well-used binders do, and I salvaged the GNR logo and transferred it to my subsequent school binder. Eventually it ended up with some of my other various crap. And here we are.

I'm still a Gun N' Roses fan (Tone Lõc, too, for that matter). My sentimentality extends to music I listened to as a kid.. sometimes to "guilty pleasure" levels such as the first Paula Abdul album and Roxette. But GNR isn't too shameful to like these days. Hell, I even enjoy much of Chinese Democracy. Sure, Axl is a nut, but you gotta admit they've got some good tunes.. assuming you're into rock music from that era.


"Locomotive" might be my favorite Guns N' Roses song. Gets me amped up everytime. "Mr. Brownstone" is right up there too.

Any other fans out there? What's your favorite GNR song?
Posted by defgav at 10:37 AM