As promised, I busted my final xmas/bday gift hobby box last night, 12/31. Topps Tribute is generally too rich for my blood to be buying boxes of, but it was great as a gift from my folks and the Dave & Adam's Black Friday sale price was reasonable less unreasonable than normal, so I nudged my mom to it. The only time I've bought a high-end box, it was a disaster. So I tend to stick to buying singles if I dabble with pricey products. But they sure are a thrill to rip. 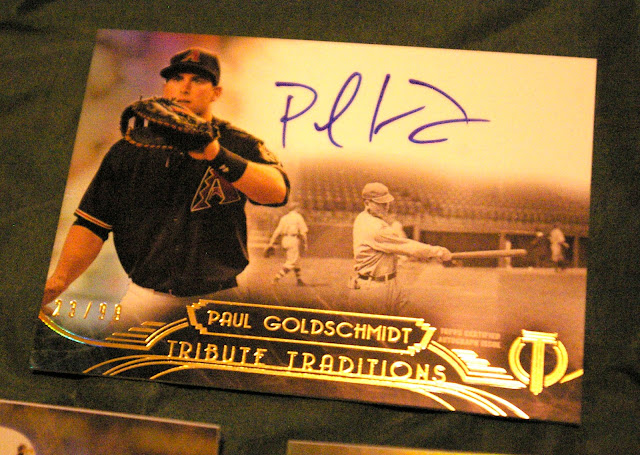 The box is off to a great start with an auto of perhaps my favorite active player to collect. Big Paul Goldschmidt is looking good on this #'d 23/99 on-card auto. I believe this is my third Goldy auto.. maybe 4th? It's not a "sick mega hit" as far as resale value, but I'm very happy with this pull. 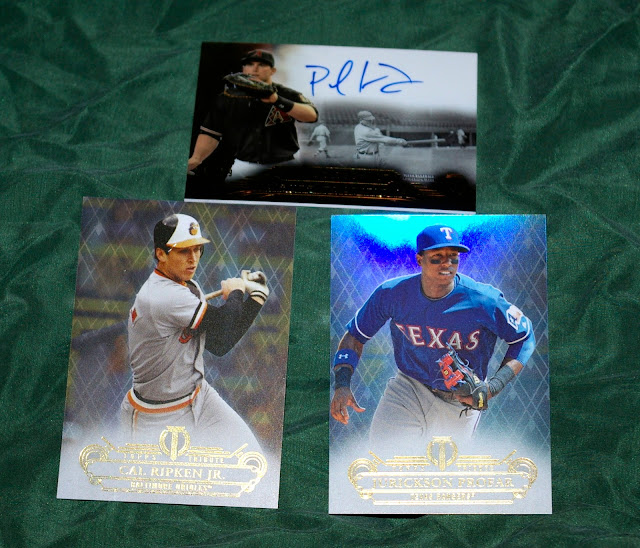 The 3-card pack also provided base cards of Cal Ripken and Jurickson Profar. The Profar is up for trade, if anybody's interested. 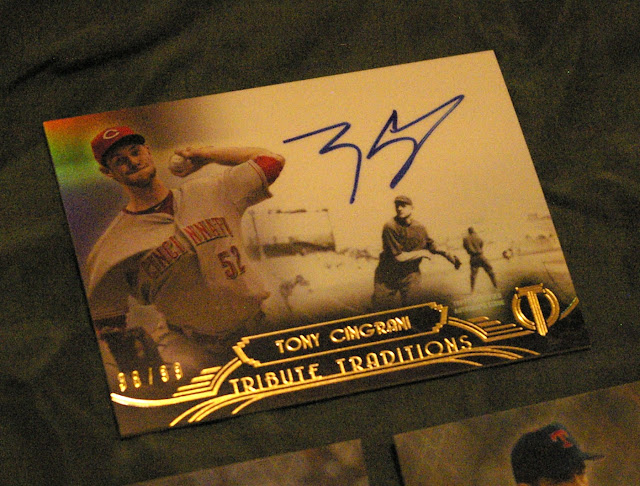 Topps really liked Tony Cingrani in 2014, cranking out a bunch of cards of him. He hasn't had much success since a promising rookie campaign in 2013. I have no interest in this card, but Jason from The Writer's Journey has called dibs on working out a trade for it. 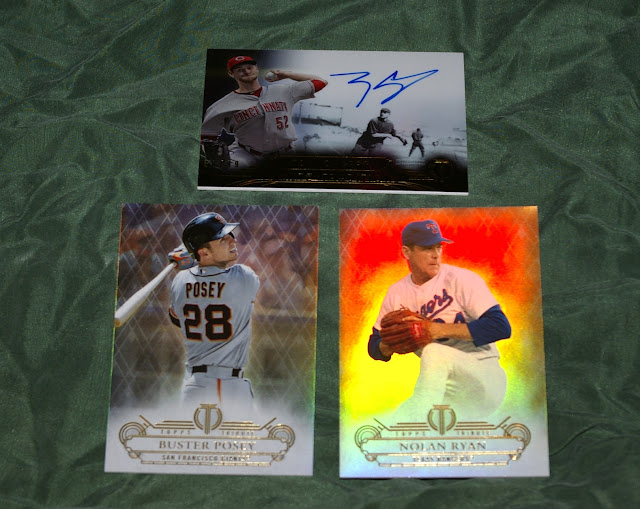 Buster Posey and Nolan Ryan were the base cards from this pack.. not bad. Nolan's exploding out of a rainbow in this photo. 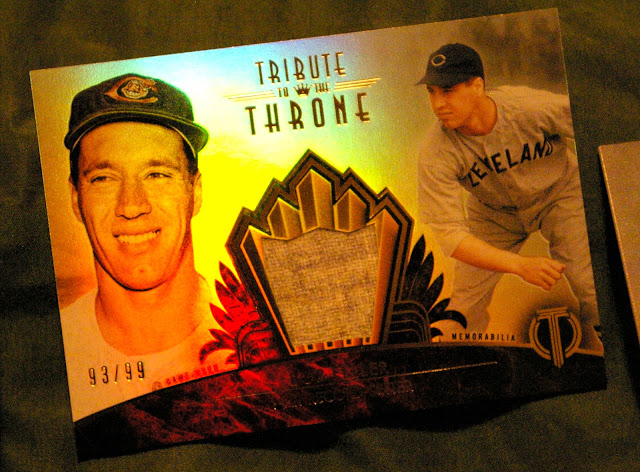 Of course an auto is pretty much always better than a relic, but I was still happy to pull this old-school Bob Feller jersey swatch. 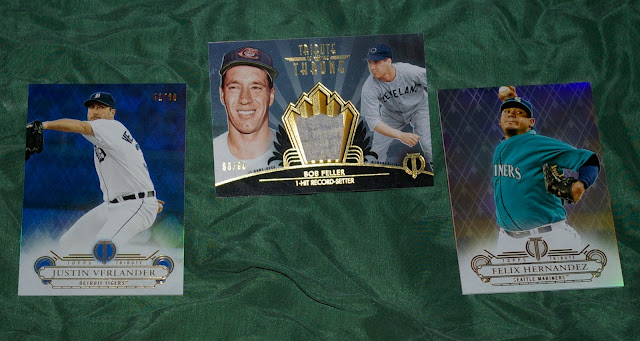 Also in this pack were a Justin Verlander blue parallel #/99 (earmarked for Too Many Verlanders if he needs it) and Felix Hernandez (available for trade). 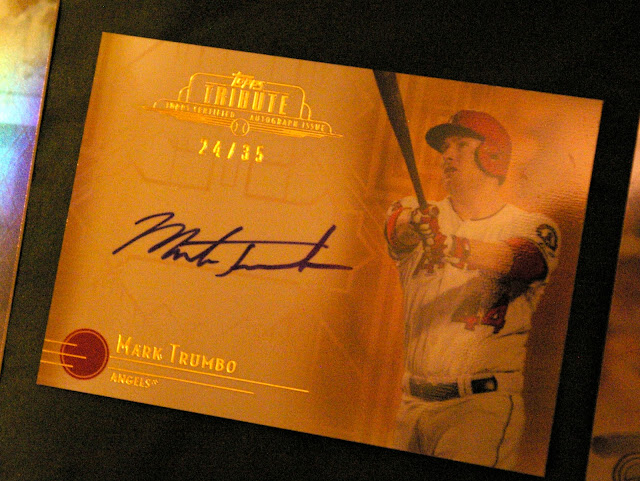 My heart skipped a beat at the sight of an auto from a white Angels hitter named M___ Tr___. But then the all-too-familiar grim realization that the player on the card isn't Mike Trout, but rather Mark "Sad" Trumbo. Cue the sad trombone. Available for trade. 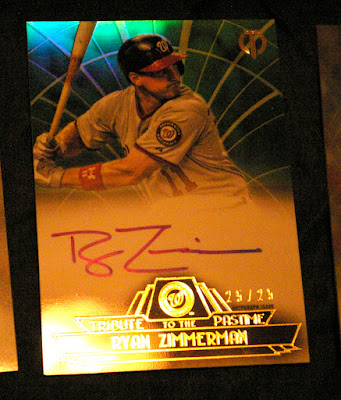 Damnit! Now the baseball cards are just fucking with me! I followed up Not Mike Trout with Not Bryce Harper. Ryan Zimmerman has had a fine career, currently sitting on an even 200 career homers. But it was devastating to pull this card of a Nats dude who at first glance might pass for Bryce Harper, only to realize it wasn't. Still though, Ryan Zimmerman auto #'d 25/25.. that's fine. It's available for trade considerations.

Zack Wheeler and Robinson Cano are the base cards here. All up for trades. 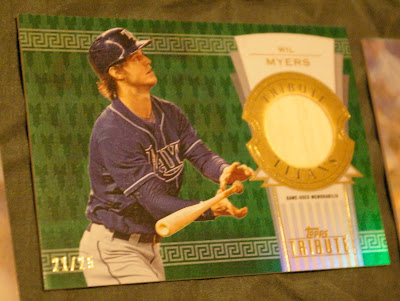 Ending on kind of a dud with this Wil Myers bat relic. But hey, he's a guy a collect thanks to being a decent current Padre. And it's a green parallel #/25. So that's kinda cool.

Base cards in the last pack are Pujols and Boggs, a couple guys I have small PCs going for, so not bad.

So there was that. Would have loved to pull something really special like a Koufax auto or a bat knob relic or something. But no. At least the Goldy auto saved the box for me. But with how expensive these boxes are, another good hit would have been nice. But again, it was a gift, so it's all good.

As far as goals n' such since it's New Years Day, well, I only have one collecting goal every year: Add zero new bobbleheads to my collection. How'd I do this year? I passed! I still don't own any bobbleheads. Let's hope 2016 is as successful on that front!
Posted by defgav at 3:27 PM