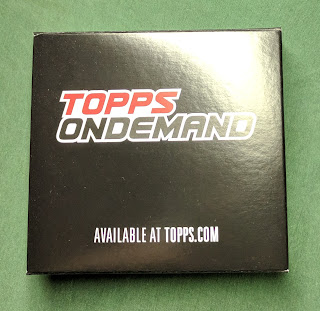 Topps put out a handful of On Demand sets in 2017. They're in the vein of Topps Now and Topps Throwback Thursdays sets, and available for a limited time through Topps.com. I pulled the trigger on the "2017 Topps MLB Rookie Class" set. It was available near the end of the year, and was pretty obviously just an excuse for Topps to cram a few more "RC logo" cards of Aaron Judge and Cody Bellinger before the calendar ran out. But I thought it looked cool and was a reasonable price.

Per Cardboard Connection: Utilizing  a new design, the 12th set in 2017 On Demand is for the baseball rookies. Every 2017 Topps MLB Rookie Class set features at least 28 cards, including the full 20-card base set, five random Rookie of the Year Award Winner inserts for Aaron Judge and Cody Bellinger, and three (with a chance for four) bonus parallels. These can be either Orange parallels or Image Variations. The possible 29th card is a numbered parallel. 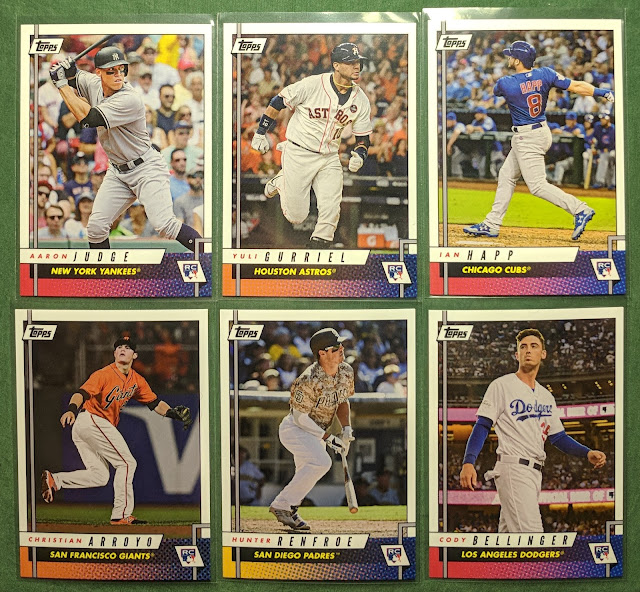 Here are cards 1-6. Definitely an early-90s vibe with this design. I started collecting in 1990, so it resonates with me, though I'd understand if older collectors turned their nose up at it. 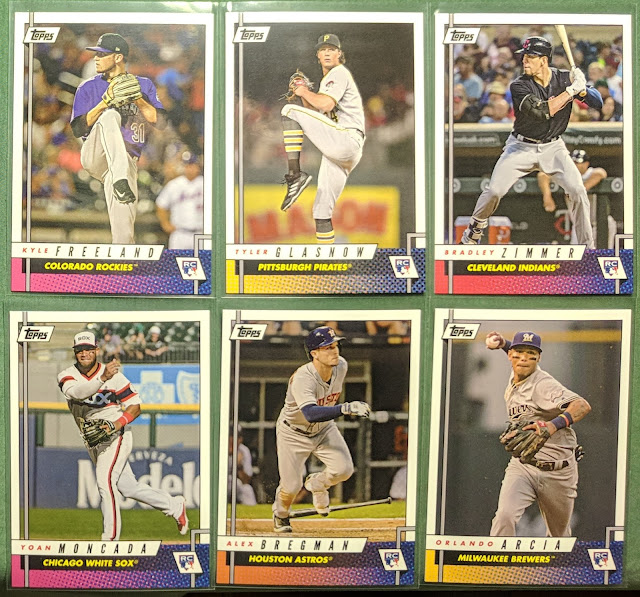 Cards 7-12. With an early 90s-inspired design and the name "Rookie Class" I wonder if they were going for a Saved By The Bell / Beverly Hills 90210 theme. Maybe I'm just reading into it. 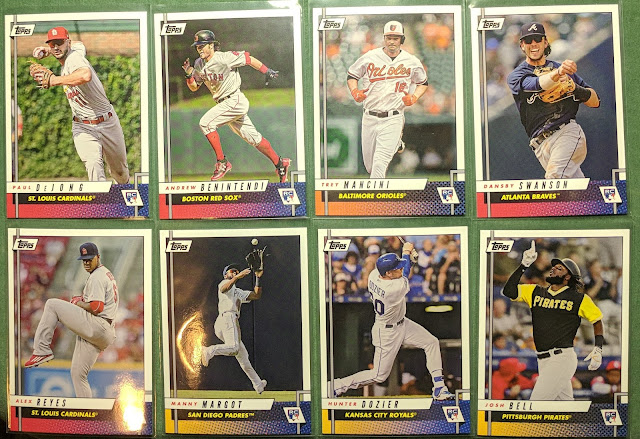 And the rest of the base set, numbers 13 through 20. I like that my often-underrepresented Padres got 2 cards in the 20-card checklist (Renfroe and Margot). I'll split the set up for my PCs, though I probably won't trade away the rest anytime soon for fear that I might decide to start collecting one of these guys down the road. Plus it's nice to know I own the set, even if it's spread around my collection. 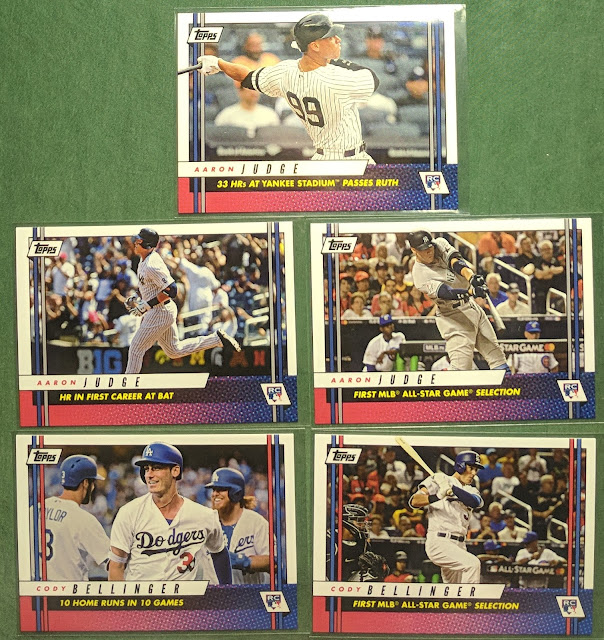 Here are the 5 ROY inserts I got with my set. Again, just pumping out a few more Judge and Bellinger RCs into the hobby. Kinda silly, but I'll happily add them to the respective PCs. 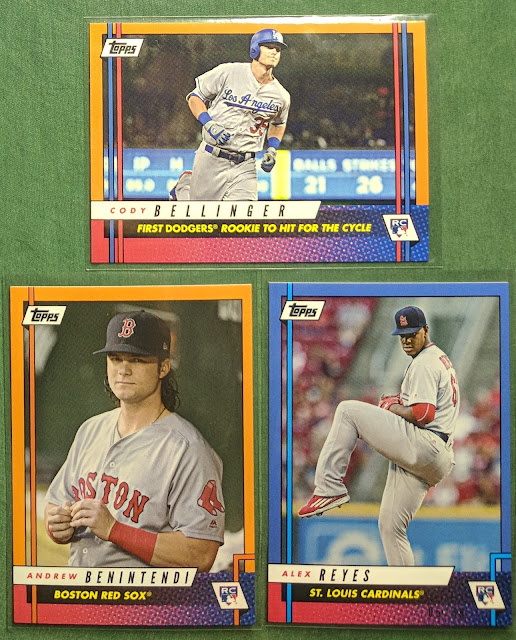 Here are the parallels I got. Not bad! The Bellinger is an orange parallel of a ROY insert. The Benintendi is an image variation as well as being an orange parallel. The oranges aren't numbered. The only numbered parallel I got was the blue Alex Reyes /49. Honestly, that card was my only disappointment with the set, since Reyes' 2017 season was lost due to Tommy John and so I'm not sure why he was even included in this set that wasn't put together till the season was over. He still has his rookie status for 2018. But I guess Topps can't use the RC logo on his 2018 cards since they already used it on his 2017 cards. According to Cardboard Connection, you aren't guaranteed a numbered parallel with each set, so I shouldn't really complain about landing one. 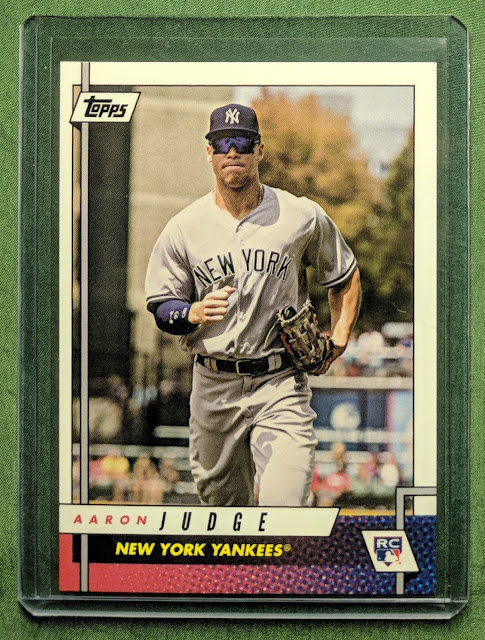 Where I really lucked out was with this image variation of Aaron Judge's base card. It's a bit off-center, but still a nice pull. 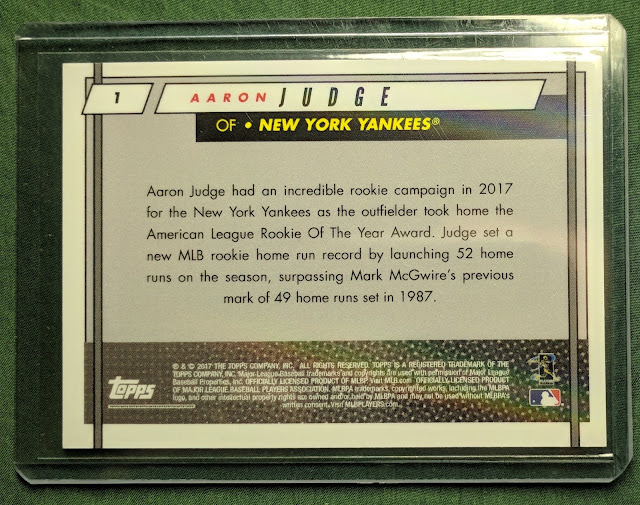 Here's what the backs look like. It's on the same stock as 2017 Topps Now cards with the semi-refractor sheen on the back.

So that's that. The 5 different Judge rookies alone made it worth the purchase price to me (1.25 blasters), and the orange Bellinger and Benintendi parallels were also sweet pulls.. and if Alex Reyes makes a strong comeback, that blue parallel will look a lot better to me.

Thanks for reading.
Posted by defgav at 3:27 PM