Padres fans such as myself are still basking in the afterglow from the recent announcement that Trevor Hoffman will be enshrined in the Hall of Fame. I don't need to tell you that it's a nice feeling to have one of your city's sports stars make the Hall of Fame.

It'll probably be a long time till the Padres have another one. Maybe if Adrian Gonzalez recaptures his form with the Mets and has a few more good seasons, he might have a shot, but I wouldn't bet on it. And while not thought of as a Padre, there's Anthony Rizzo who briefly played for San Diego before being traded to the Cubs. If he keeps it up for another decade, he'll have built a good case for himself. And I'm still holding out hope that Garvey and McGriff claw their way in someday. Gary Sheffield might eventually get in if/when voters lighten up about PED-tainted numbers.

I was thinking about my Kevin Baconesque degrees of separation from the Hall of Fame thanks to going to school with Marcus Giles. (I'm sure longtime readers of my blog are sick of me bringing this up, so please forgive me. Hey, my spellcheck is telling me Baconesque is a real word.. wow.) 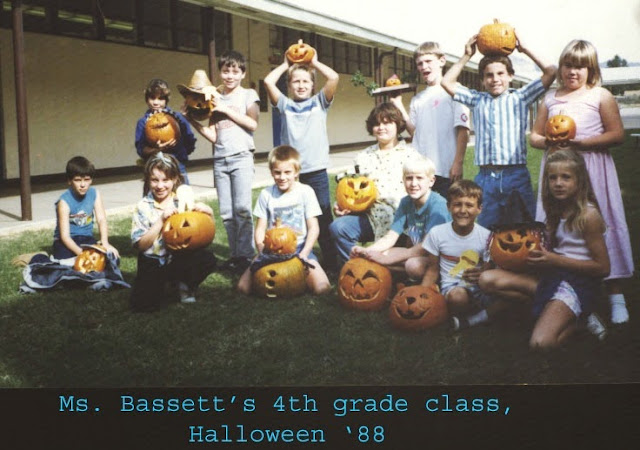 I'm the kid whose pumpkin is wearing a cowboy hat and big, bushy mustache. Marcus is the kid in vertical stripes. You probably can't tell, but I'm wearing a Padres shirt. Surprisingly, I still remember most of these kids' names. My best bud in the photo was Dave Paxton, the kid with the double-decker pumpkin. I've got great memories of slumber parties at his house.. playing NES, watching cheesy action movies, and getting into mischeif outside at night.

But yeah, Marcus played on the 2007 San Diego team that not only included Trevor Hoffman, but also Greg Maddux. 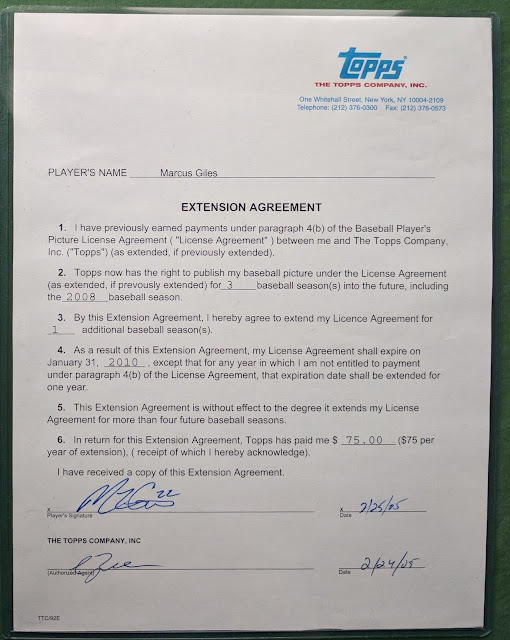 I recently won an eBay auction from the Topps Vault for this baseball card contract. I get a kick out of Marcus including a jersey number inscription ("22") even on a legal document like this. I guess it probably becomes a reflex after signing so many autographs.

Marcus also got to play with many great players during his years with the Braves. Maddux, Smoltz, Glavine in the rotation. Chipper Jones at 3rd. Andruw Jones in center. Gary Sheffield in right. Julio Franco on the bench. Fun to think I'm just "one degree of separation" from those guys, whatever that really means. 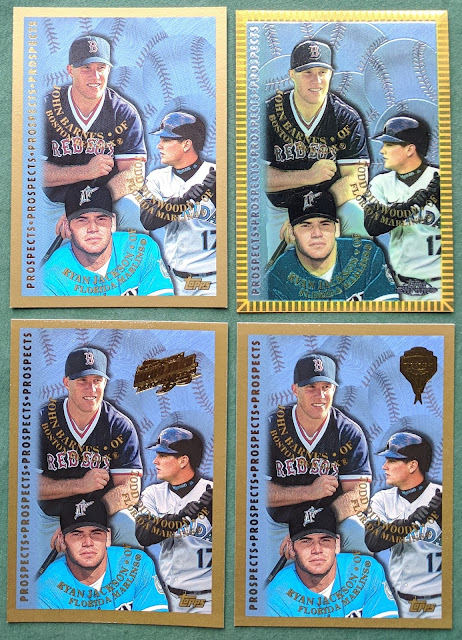 I picked up some new John Barnes cards in my recent Burbank Sportscards order. Gotta figure I'm not too far from completing this PC, as he doesn't have a ton of cardboard out there, but can't believe I didn't own any of his 1998 Topps rookie card. Here I've not only grabbed the flagship base, but also the Chrome and the inaugural season variations for the Devil Rays and Diamondbacks. 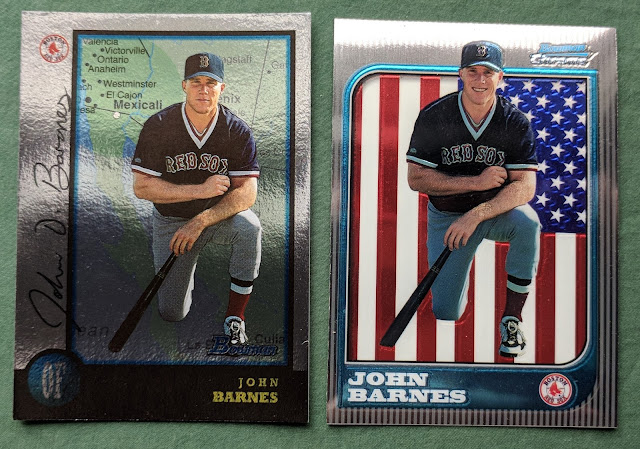 John Barnes played on the 2000/2001 Twins alongside presumptive future HOFer David Ortiz. Barnes was a senior at Granite Hills when I was a freshman, so that means (by meaningless guidelines) I've got one degree of separation from Big Papi.. cool! 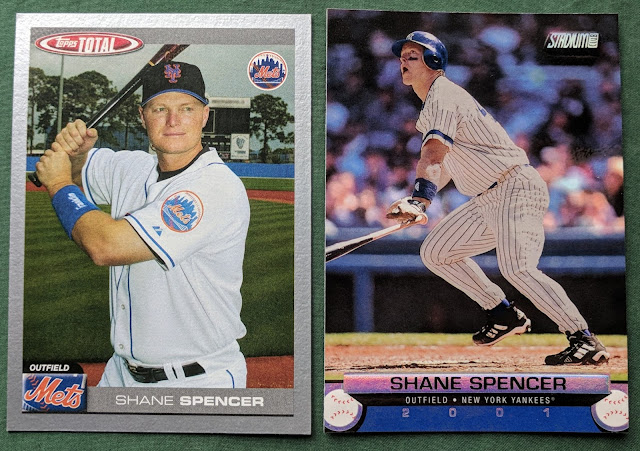 Found a couple Shane Spencer needs from Burbank as well. Shane played for the turn-of-the-millennium dynasty Yankees, so there are a lot of great players to link him to. I think Tim Raines is the only current Hall of Famer, but you've also got Jeter, Mussina, Mariano, Clemens, plus guys like Strawberry, Canseco, Giambi, Posada, Pettitte, Bernie, Tino, etc. Lots of household names there. Spencer, who graduated a couple years before I started high school, finished his MLB career on the 2004 Mets alongside Mike Piazza and Tom Glavine.

Casey Craig, who attended Granite a few years after me, never made the majors, but in the minors he was on the same teams as Adam Jones and Jeff Cirillo, each multiple-time MLB All-Stars. I was surprised I didn't already own this Bowman Chrome base card, as I've got some parallels of it.

Tom Fordham graduated from Granite Hills a year or two before I started going there, so there's an added degree of separation there, but he played on the 1997/1998 White Sox teams that featured HOFer Frank Thomas, not to mention other notable names such as Ozzie Guillen, Albert Belle, and Harold Baines. 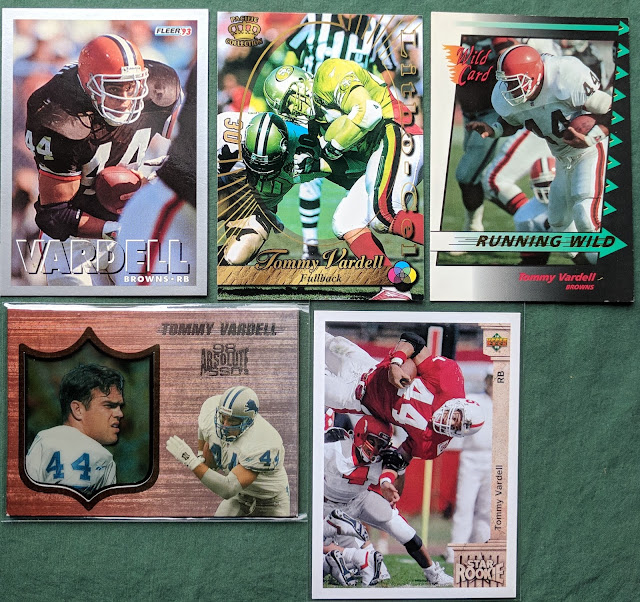 Added some Tommy Vardell cards to the PC recently, too. Touchdown Tommy played on the 49ers with HOFers Jerry Rice and Steve Young, as well as on the Lions alongside Barry Sanders. Some big names there! He was a few years before my time at Granite, but not too many degrees of separation from me.

I was just about to say Vardell is the only Guy From Granite to ever play in the NFL, but then I just now discovered a guy named Joe Cardona currently with the Patriots and has been since 2015. Oh man, my mind is blown. Does this mean I have to root for New England now?! As a long snapper, he doesn't have many cards out there, but looks like he has a "Salute to Service" insert in 2017 Donruss (he played for Navy after high school). Anybody happen to have that card for trade? I'll need to track one down. Cardona went to Granite long after me, so I'm sure it's a long list of degrees of separation, but pretty cool that a guy from my high school played on the Brady/Belichick dynasty Patriots.

While I don't have any more new cardboard additions to feature, to continue in the theme of this post regarding legendary players that guys from my high school shared a locker room with:

Chris Jones (white guy from the 80s) played on the '85 Astros with Nolan Ryan. He was also briefly with the '86 Giants, but I'm not sure he was on the roster at the same time Steve Carlton was making a short-term stop there near the end of his career (I think they just missed crossing paths by a couple weeks).

Brian Giles played with Jim Thome, Eddie Murray, and Dave Winfield on the Indians in the mid 90s. With the Padres, he suited up with Piazza, Maddux, and Hoffman.

And Mike Reinbach played on the 1974 Orioles with Jim Palmer.
I think that wraps it up.