Man, this one feels good to have wrapped up!

I've always really liked the look of 1965 Topps. It's just a classic design. If you looked up "baseball card" in the dictionary, there should be a picture of a 1965 Topps card. Simple design with the pennants on the front. And the real secret weapon is the awesome cartoons on the back.

I officially kicked off my Strive for '65 ("Strive for 65" ® and ™ CaptKirk42) back on August 14, 2015 after a few months of rounding up '65s from trades and the like. I probably would have started on it sooner, but 2014 Topps Heritage kinda burned me out on the design for a while. 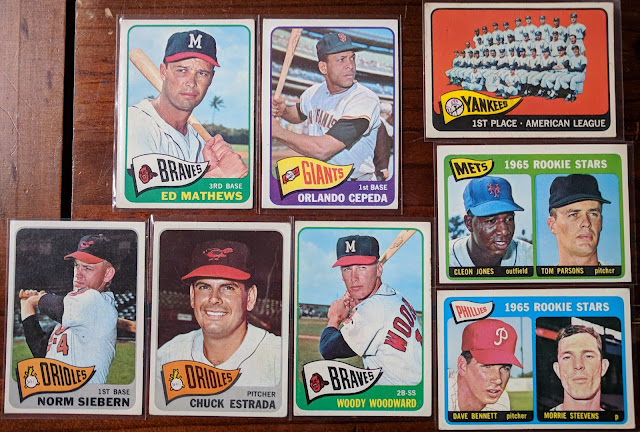 This lot from COMC were the last cards I was waiting on, highlighted by a couple HOFers and a Yankees team card. While these were the last cards to arrive, they had been sitting in my inventory for a while, waiting for COMC's Black Friday sale for the free shipping. So, although it arrived in-hand before these, the final card I secured was actually... 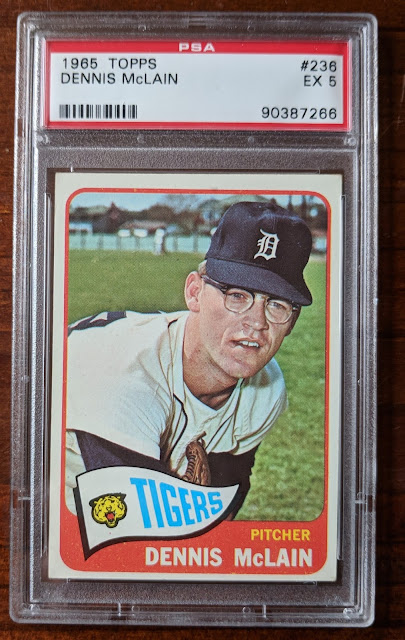 ..this Denny McLain rookie I scored on eBay back in October. Even sprung for a graded copy for added oomph.

Big thanks to all the traders who've helped me out with this set over the past few years. Special shout-outs to Mark Hoyle, gcrl, Kevin G, and Stubby who each contributed 20+ cards to the cause. 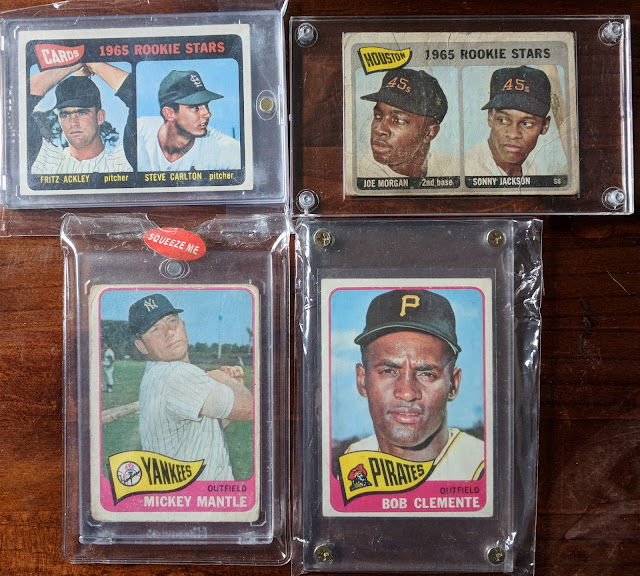 I've still got about 77 "fair" condition cards in the set that I'd like to eventually upgrade (such as Joe Morgan and Mickey Mantle here), but that's a low priority for me right now. There are also plenty of guys I collect in the set that I wouldn't mind having another copy of their '65 card for the PC (such as Clemente), but again, not a huge deal for me. I have no interest in the accompanying embossed insert set, so as far as I'm concerned, other than upgrades and dupes for PCs, I'm sticking a fork in 1965. 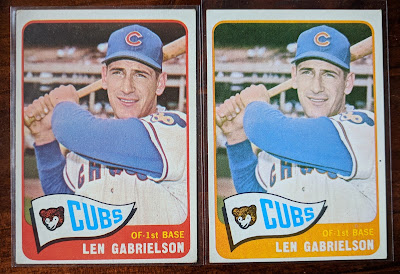 My set includes a couple "official" variations (checklists with minor differences), plus a couple unofficial ones, such as this "yellow" Len Gabrielson. I guess either the magenta was running low on this print run, or else maybe it had been displayed in direct sunlight for a few years. 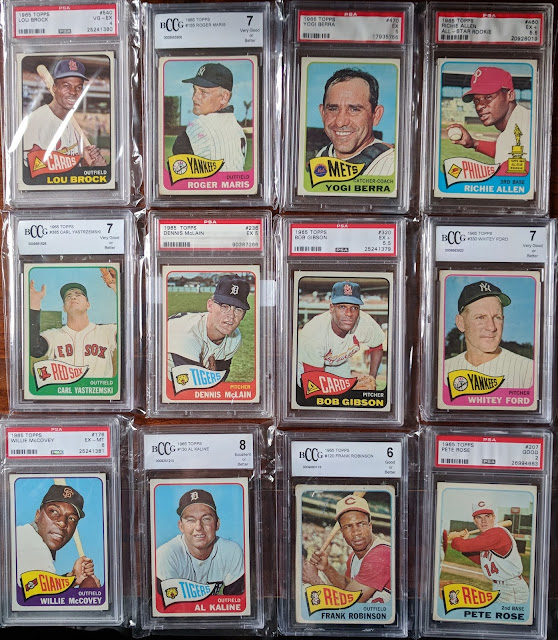 Twelve cards in my set are graded. None are particularly "high grade" but I don't plan to break them out anytime soon. –Maybe someday if I decide to put the set in a binder. 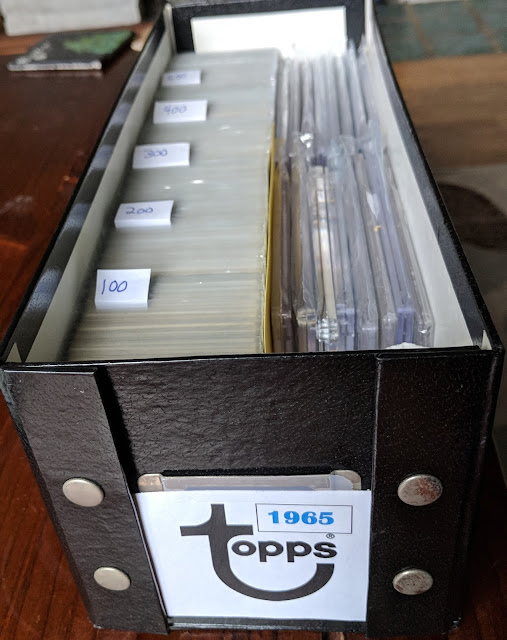 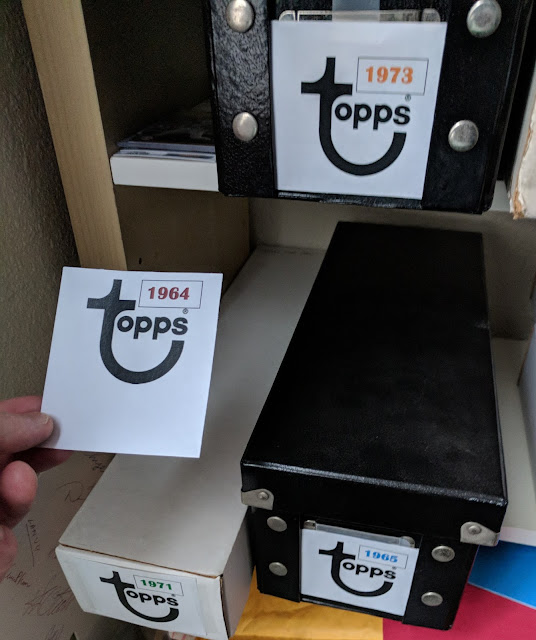 Years ago, I printed out 4 labels back at my old job for sets I wanted to complete. I don't put the label on the box until the set is complete. As you can see from the photo, the last set from this 4-pronged collecting goal of mine is 1964 Topps. So you'd think that'd be next up in my crosshairs now that '65 has been put to bed.

But nope! After spending a lot of time and money on '65 last year, stressing out a little trying to make my self-imposed deadline of finishing it by the end of 2017, my goal for 2018 is to not complete any vintage sets (nothing pre-late 70s, at least). I'm taking a breather.

Going easier on myself, my goal for 2018 is to complete 1980 Topps. As I've mentioned on the blog before, I've got a sentimental soft spot for 1980 Topps since I ended up with 4 or 5 cards from the set as a kid in the mid 80s, the first baseball cards I ever owned. Personally I've always considered 1980 the last "vintage" set, but I know that hobby term doesn't have an exact definition that everyone agrees on.

Over the past week, I finally sorted my pile of cards from the set so I could get serious about it.

I was hoping to be at around 70% out of the gate, but I ended up with a lot of dupes. Still though, 55% is a very good starting point, thanks to the couple starter lots I was sent last year. I raided my PCs for some cards, such as the Rickey rookie, but hopefully I'll be able to eventually score dupes to replace them. I'm optimistic I'll be able to knock off the rest of the set via trades over the year, but we'll see.

Got my wantlist up here: 1980 Topps wanlist
Please drop me a line if you've got some cards to knock off my list and we'll work out a trade.