Chipz and dip into my COMC order

After being distracted by holiday stuff, it's now time to resume unpacking my Black Friday COMC order.

I've said it before but I hate Topps Chipz. They really botched what could have been a fun product. The colored parallels were way too tough to pull. If they would have been more generous with the red and blue chips, guys could have actually used them for playing poker. I'm not even a card player, but that would have been pretty cool. But instead it was white chip after white chip, with an occasional metal parallel or glow-in-the-dark parallel. Don't even get me started on the glow-in-the-dark parallels! Instead of making the actual plastic chip glow-in-the-dark (which would have been awesome.. I'd have gone after the complete set!), they cheaped out and only put a teeny-tiny bit of glowing behind the player's head. Terrible! I'm so glad this product died after 3 pathetic years.
All that said, I was compelled to actually own some of the near-mythical color parallels, so I found the cheapest examples I could find of guys I collect. The black Matt Kemp also allegedly glows in the dark a bit. I suppose it's nice of COMC to treat these like coins and put them in those little cardboard holders which make them slightly less of a pain to store. 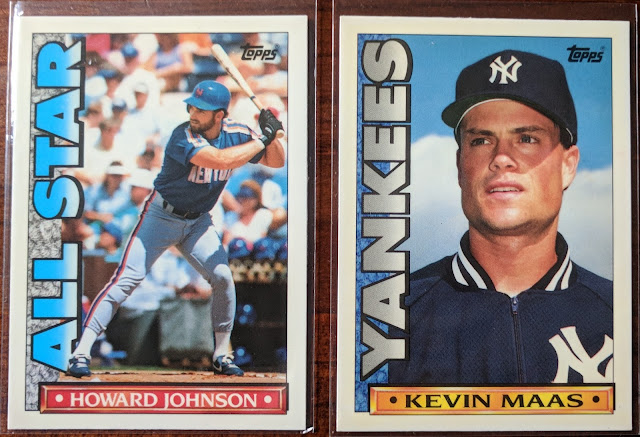 1990 Topps TV is a mysterious (to me, at least) overproduction-era set that I've heard about here and there, but never actually had an in-person encounter with. So like with the colored Chipz, I wanted to get some representation in my collection, and hunted down the cheapest available cards of any dudes I collect, settling on Howard Johnson and Kevin Maas here for about a buck combined. 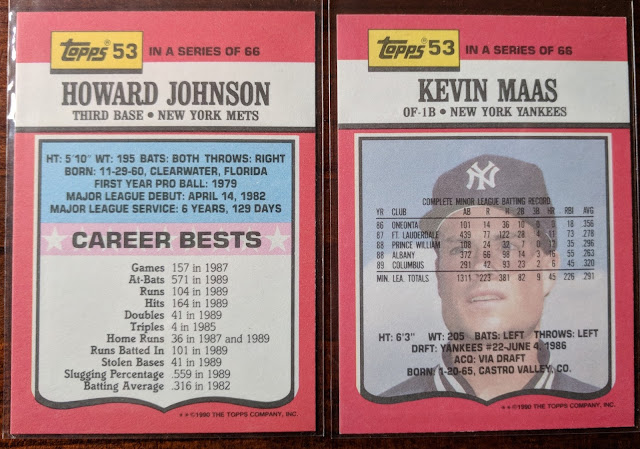 Flipping these over, I was confused how they were both numbered 53 in a series of 66, and had somewhat different back designs. Turns out there was a main "All-Star set" (where the Hojo is from), but some teams (like the Yankees) also had a separate Team Set (where the Maas is from). It's my understanding these sets were sold on the home shopping network or something like that, hence the name Topps TV. Or actually, from googling it just now, per baseballcardpedia.com:


Topps TV are a series of six different 66-card sets produced by Topps in 1990 and available via a special TV offer. There were six different sets made: All-Stars, Cardinals, Cubs, Mets, Red Sox and Yankees. The five team sets were only marketed in the respective team's local TV market; while the All-Stars set was available nationwide. Collectors living anywhere in the country could, theoretically, order any of the sets. Distribution: Factory sets. Available through a "1-800" number.

Interesting. I looked for the commercial on YouTube but didn't see it up there. I wonder if it was just a quick ad or more of an infomercial.

Here's another oddity from the junk era (forgive me for using the hobby slur). I also wanted to add some more 1991 Topps Operation Desert Shield cards to my collection. I previously only had the Bip, I think. You know the deal, I searched by cheapest-first and looked for dudes I collect. Ended up with a couple of the Springfield Nine and Hendu, each costing me a buck or two.

Lastly for today, a short-term stop trio of Kevin Mitchell cards. I don't really PC him, but for whatever reason was compelled to track down a card of his from each team he played for. (This was likely around the time I scored the 12/24 card of his and was reading up on him more.) The Giants, Reds, and Mets are the main teams he's known for, of course. As far as partial-season stints, Red Sox (27 games), Indians (20 games), and A's (51 games) are represented here. There's also the Padres (which I know I have a card of) and the Mariners. Pretty sure I had a Seattle Mitchell card at one point, but may have traded it away over the years.. so I may have to rectify that at some point to complete this mini-goal of mine.

That's all for now. Thanks for checking it all out.
Posted by defgav at 4:08 PM