Good monthly card show haul today. When I first showed up, my regular dealer Bill's cheap bins were completely packed with dudes flipping through cards, so I bided my time in his mid-priced bins, picking up cards a bit more than my card show norm. 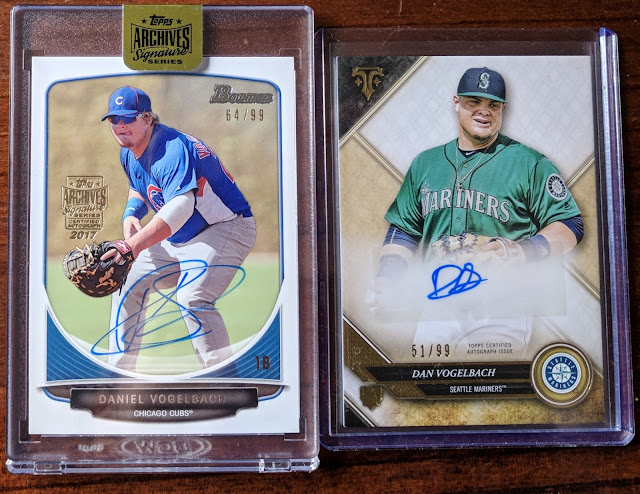 Topps went nuts flooding the market with Dan Vogelbach autos in 2017, just ask P-town Tom. While I've cooled on collecting the Vogelmonster in the past year, still threw these /99 autos on my stack for the heck of it. Can you believe some collectors have no preference between on-card signatures and stickergraphs? 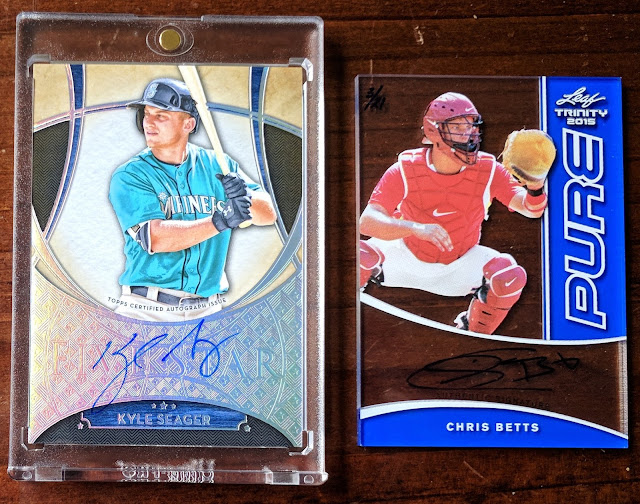 A couple more autos. I don't even collect Kyle Seager, but thought that was a nice looking card for a solid price. And those "glass" cards are always neat, and Chris Betts /21 here was cheap. 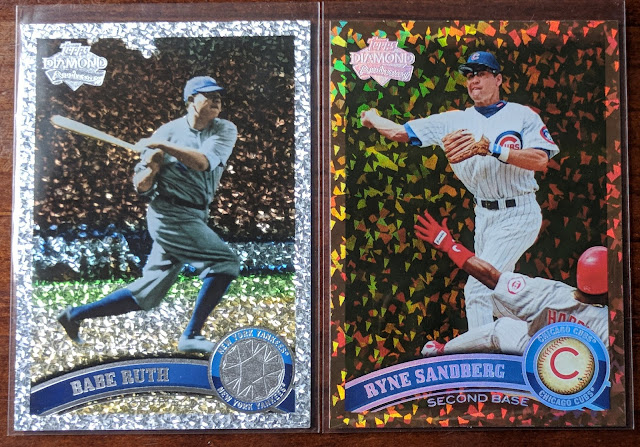 A couple sweet Legends variations for my 2011 Topps parallel frankenset. 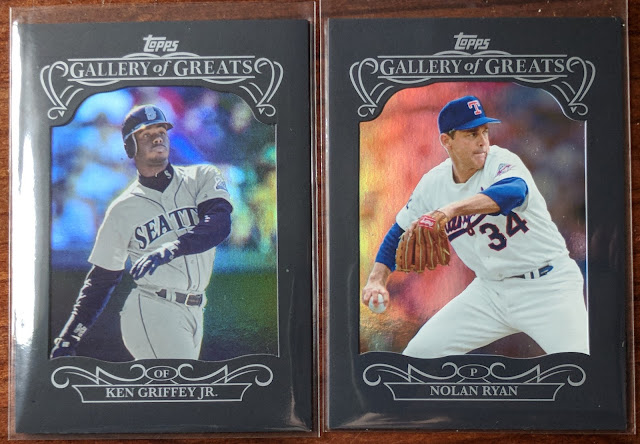 I just recently gave up on collecting the 2015 Topps Gallery of Greats insert set and had deleted it off my wantlist. Still though, I'll pick up needs of guys I collect. Love these. 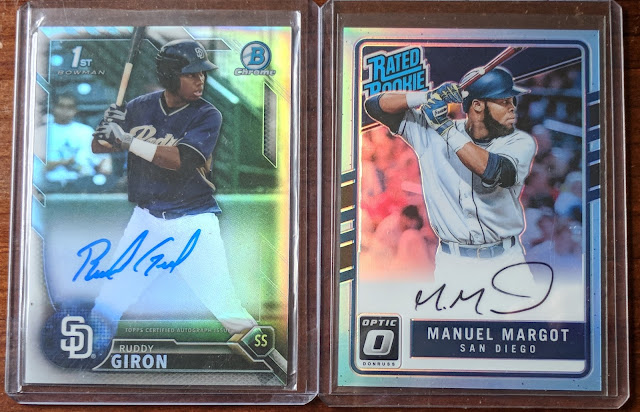 A couple autos of young Padres. I nearly passed on the Margot, but its #/35 serial number on the back suckered me in. 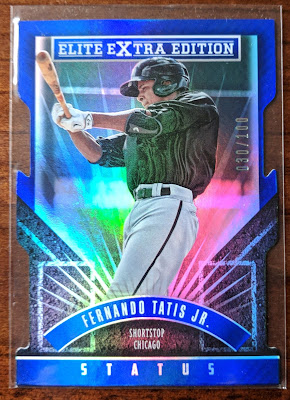 Fernando Tatis Jr. is one of the Padres' top prospects, so I shelled out a few bucks for this #/100 diecut. Really hope he pans out in a couple years when all the "rebuilding" should start shaping up, in theory. 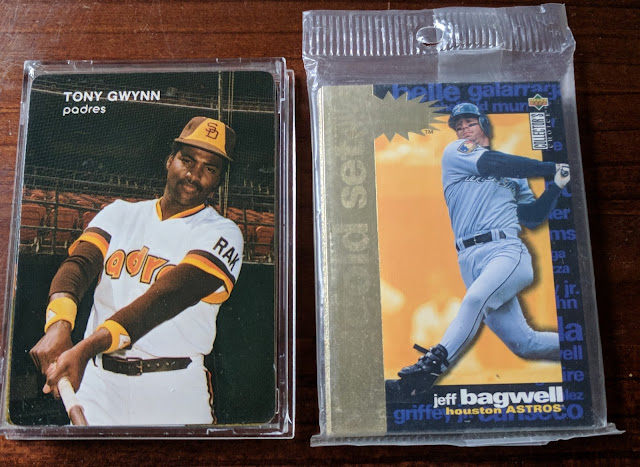 A couple sets here. 1984 Mother's Cookies Padres team set, and a 1995 Collector's Choice You Crash the Game Exchange Gold set which is still sealed but I'll probably open it and raid it for my PCs soon. 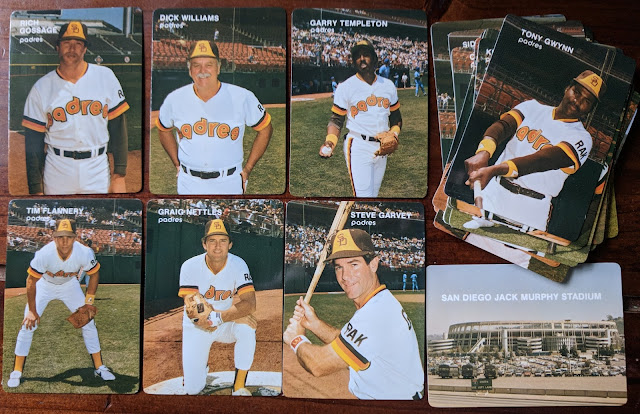 I mainly bought the Mothers set (at $1.50 was among my best deals of the day) for the Gwynn, but there are a few other guys I collect in there too. As I've said many times, those are my all-time fav uniforms.. and they look great on this glossy set. 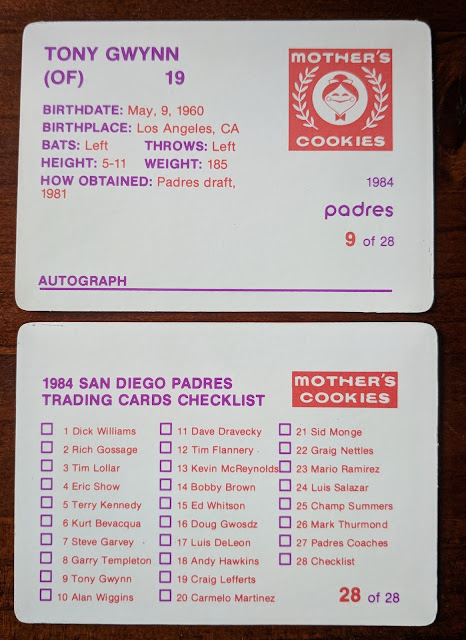 Some backs, if you were interested. Always think it's funny to see the "autograph" area. I wonder if some dumb kid was like, "Excuse me, Mr, Gwynn, could you please sign my card for me? –No, Tony, you're supposed to autograph on the back!"

Actually, now I'm kind of wanting to get a Mother's card signed on the back. Need to find one of a dependable TTM guy, send it with a sticky note on the front asking him to sign the back. That'd be hilarious. 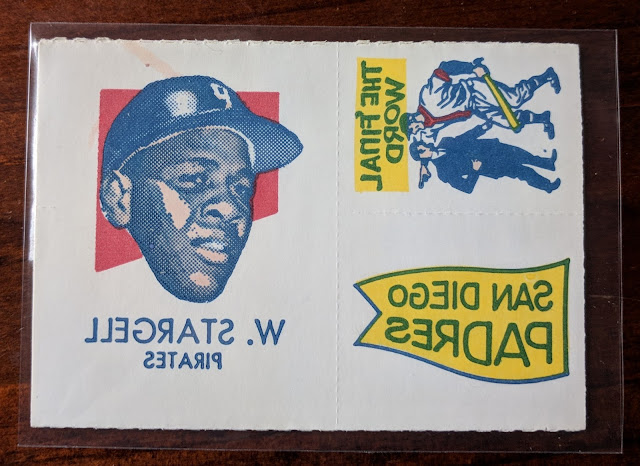 It's a complete sheet! Pretty cool, even though Stargell is the only HOFer in the bunch. 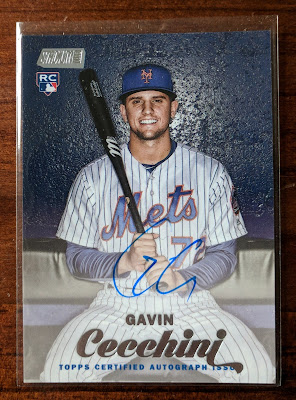 This was a freebie. I bumped into my bud Padrographs Rod at the show, and later he came back around and gifted me this Gavin Cecchini auto he had just scored for me. Awesome.. thanks again, Rod!

Speaking of free stuff, this isn't card related but I wanted to squeeze this onto the blog...

I got 5 new pairs of shoes this week! Isn't that insane? What am I, some spoiled trophy wife from Beverly Hills? The thing is I got a generous shoe store gift certificate for Christmas and I ended up using it on 4 pairs of shoes from the clearance section (budgeted nicely with just 4¢ to spare on the gift certificate!). Then at work, somebody had offered up another pair of shoes that I assume was a gift that didn't fit or something. But I tried them on and they fit great. And so that's how I got 5 new pairs of shoes in a week with no money out of my pocket. And my old shoes were falling apart, so it's appreciated. These should last me a while.

Ok, that's it for today. More from my card show haul soon.
Posted by defgav at 3:09 PM