When I open a new tab in my web browser, the first page displayed in my top 8 most visited sites is the bookmark for my Topps Retired eBay search. That just goes to show you the extent of my obsession with this short-lived product Topps put out from 2003 to 2005. My most clicked-on site isn't Twitter, Facebook, Blogger, or something like that.. it's a specific eBay search. I check that bookmark several times a day, hoping to see a 2004 refractor I need pop up, or perhaps a decent deal on a 2003 or 2005 card. The email alerts from eBay can't be trusted. I used to receive them every day. Then I stopped getting them for a few months for no apparent reason. Now they've recently started back up again. So yeah, they're not dependable. And plus they only go out once a day, so you might miss something that pops up with a Buy It Now option if someone beats you to it. 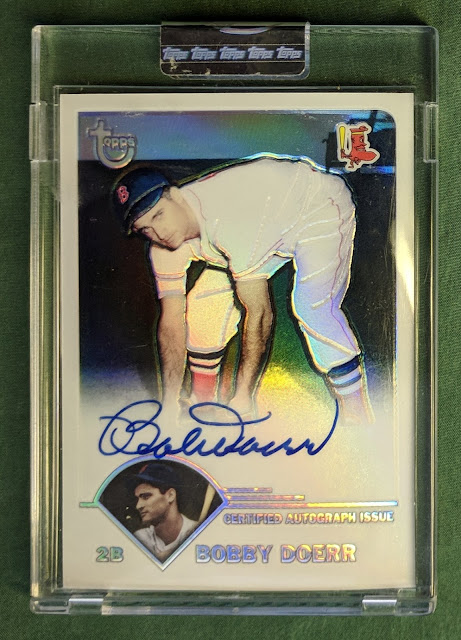 Love this refractor auto of the late, great Bobby Doerr! 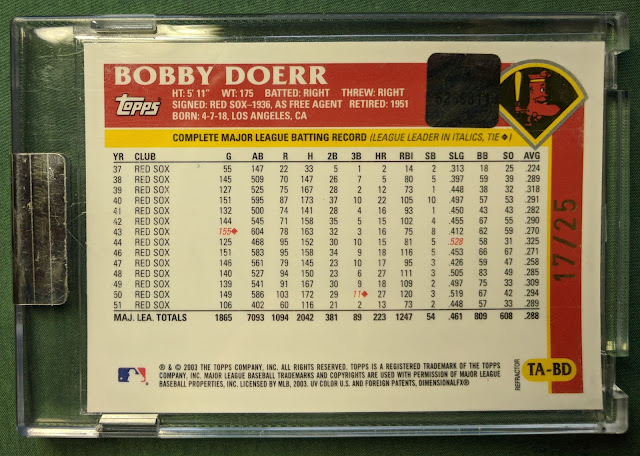 Seems a little silly paying decent money for an autograph of a guy who freely signed his name more times than anyone in the history of civilization, but hey it's a very limited card of a Hall of Famer. 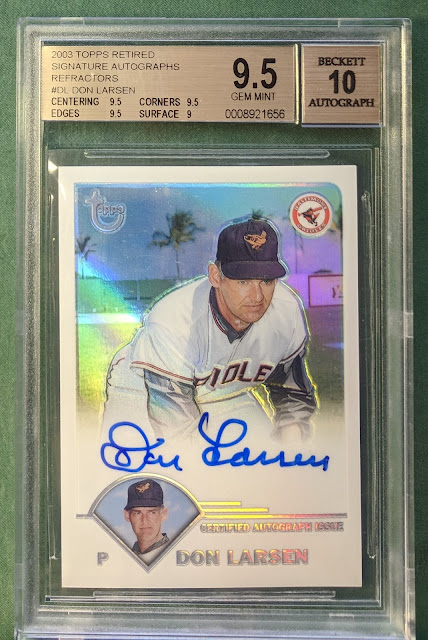 Sweet Don Larsen refractor, huh?! He's seen here enjoying a lovely spring day with the Orioles. This must have been taken at spring training 1966. Baltimore released him at the end of camp and he sat out the season before making a brief comeback with the Cubs in '67 to end his career. 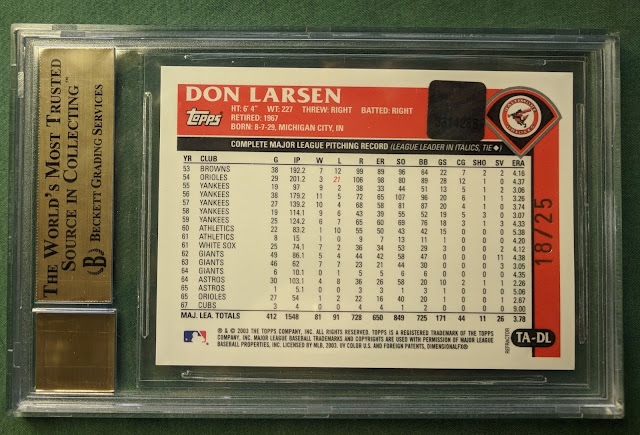 Perhaps you were curious how I ended up with two similar (but non-refractor) Don Larsen autos to give away in my contest a few weeks back? Well, one I bought a few years ago. And then the other I pulled myself in an ill-advised purchase of a few unopened packs that netted me nothing I needed but cost me a good chunk of change for the privilege. And then I ended up scoring this refractor parallel on eBay a little while later. I have a thing where I don't like to keep the base Retired auto once I've "upgraded" to a refractor parallel (unless we're talking about a top tier guy I collect like Tony Gwynn), so both base autos became available and ended up as contest prizes. 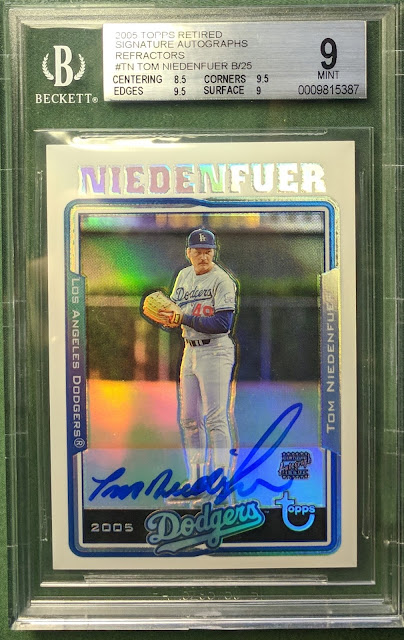 This slabbed Tom Niedenfuer refractor was won with combined shipping from the same seller as the Larsen, and it stayed in single-digits. He's kind of an odd selection for this set, as he wasn't that great or even much of a fan favorite, as far as I can tell. GCRL tells the story of how Dodger fans referred to him as "a certain reliever we need-in-fewer games." LOL 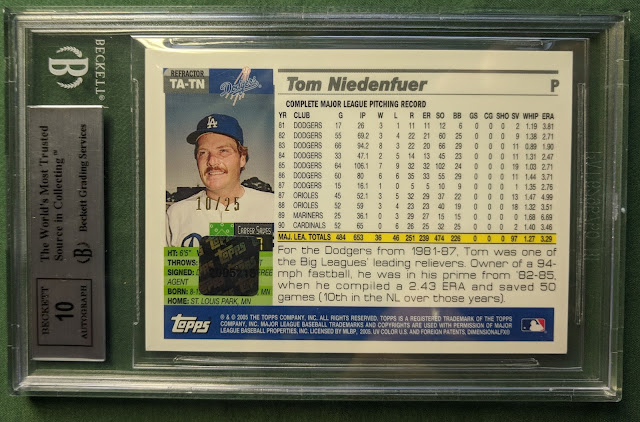 Looks like he had a pretty good peak, at least, and was especially good in 1983. 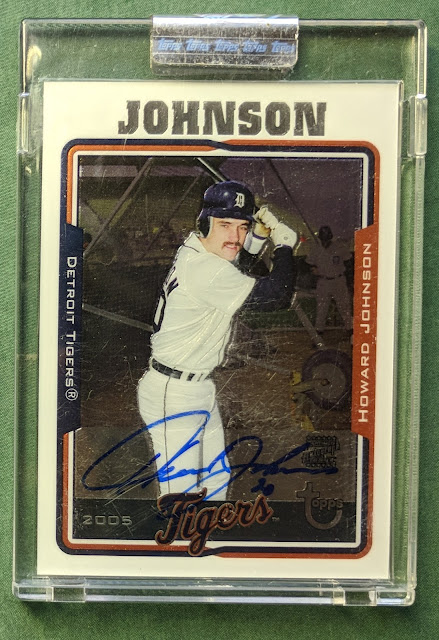 Lastly for today, here's a base auto of Howard Johnson. While not a huge name, I rarely see this card pop up. The internet is telling me it had a print run of 220 copies. I don't buy too many non-refractor Retired autos, but I've been kicking up my little HoJo PC over the past few months, and again, this card doesn't show up on eBay very often and it was under ten bucks factoring in combined shipping with a Phil Nevin patch card I got from the same seller. 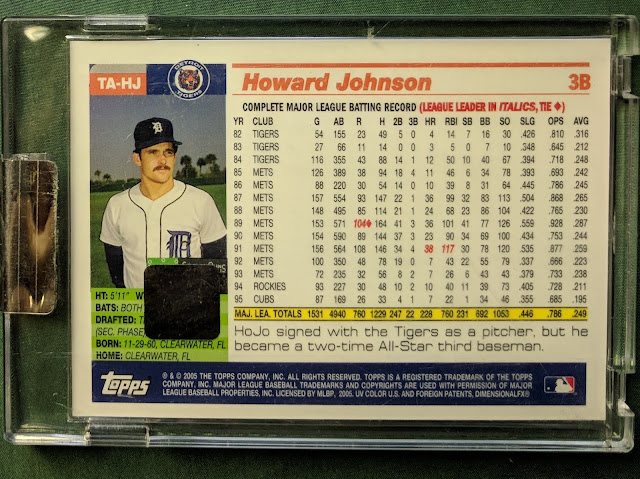 Hard to remember he captured the NL home run crown in '91. And of course he got rings with the '84 Tigers and '86 Mets.

That's it for now. Thanks for stopping by and have a great weekend!
Posted by defgav at 3:29 PM