Happy Flagship Release Day, everybody. (Oops, I think it's technically tomorrow, though plenty of it is floating around already.) I didn't buy any flagship in 2017, and I don't plan to in 2018 either. Topps' designs since 2015 haven't done much for me. I'm content eventually adding cards I want from the set thanks to trader buddies.

Speaking of which, I was the grateful recipient of an unexpected trade package from the cardsphere's favorite acronymed blogger, gcrl. (Do any of you pronounce that "Guh-Curl" in your head when you read it? "Gee-Curl" perhaps?) 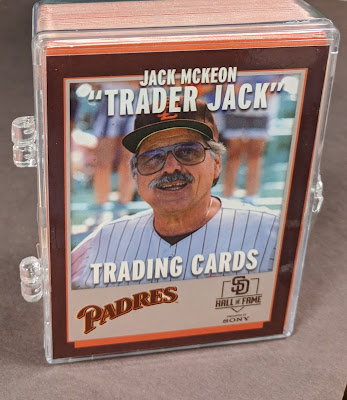 I remember hearing a little about this stadium giveaway from last year and was thrilled to get this near-complete set (gcrl plucked out the Garvey for his supercollection).
More info on this set swiped from an eBay auction:


Awesome 58 Card Set only available at 1 San Diego Padres Game this season. By far the largest standard size SGA sets we have ever seen. Sponsored by Sony and issued to commemorate JACK MCKEON induction into the Pads Hall Of Fame . The set features all 1980's Players McKeon drafted, traded for, or signed as Free Agents. Too many to name but it is loaded and a great trip down memory lane with TONY GWYNN STEVE GARVEY RICH GOOSE GOSSAGE ROBERT ALOMAR SANDY ALOMAR JR GRAIG NETTLES BENITO SANTIAGO OZZIE GUILLEN FRED LYNN KURT BEVACQUA JOHN KRUK JOE CARTER BRUCE BOCHY JACK CLARK etc.
The set is housed in a plastic case with a McKeon sticker on top. Because of how they were prepared, the cards were stuffed in the case and there are no gem mint cards. All are brand new but corners can have issues and that is the case with every set issued. No PSA gems to be had, but for the true collector one of the nicest sets you will ever own.

Pretty cool. I probably won't bother keeping it near-complete (though I wouldn't mind landing the Garvey someday), but rather break it up for my PCs since there are about a dozen guys I collect in there. 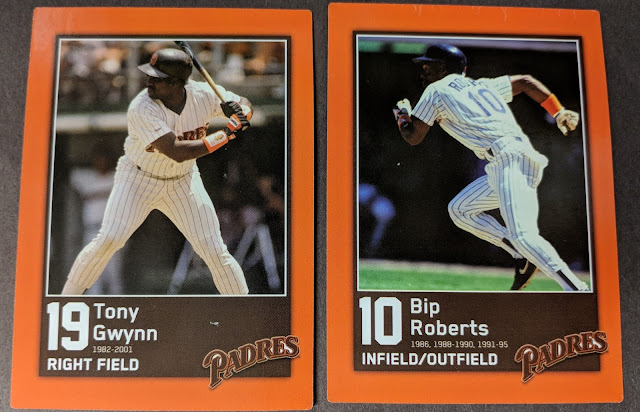 A couple of my top PCs right here in Gwynn and Bip. The description quoted above wasn't kidding when they said the cards weren't originally packaged with much care. Dinged corners and surface nicks abound. 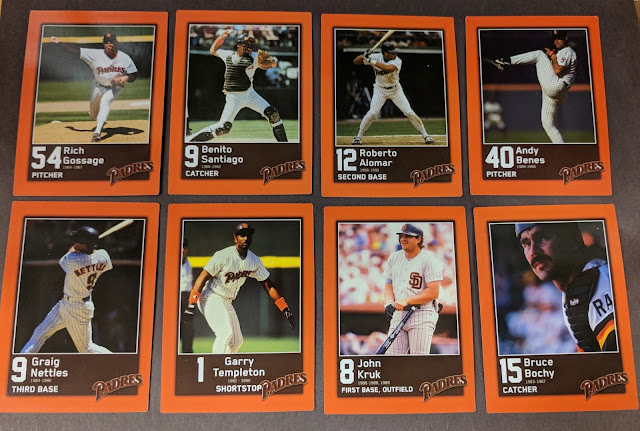 And the rest of the dudes I collect. 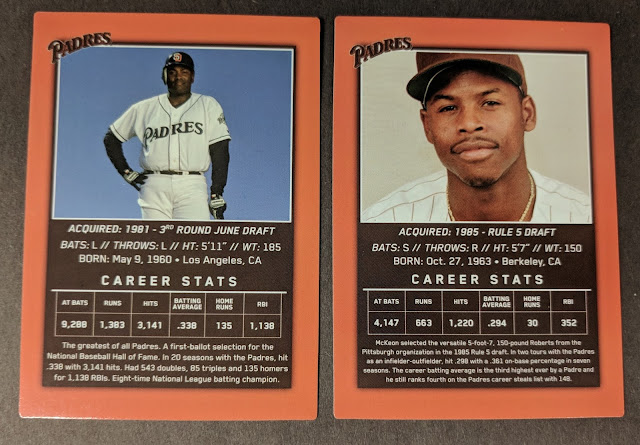 The backs are fine, but I wish they had a little copyright line at the bottom. It'll be confusing when uninformed collectors stumble upon these cards years from now. No card number, no year listed, no indication of who made them. For the record, I think these are referred to as 2017 Trader Jack Padres.

But that was only half of gcrl's trade package... 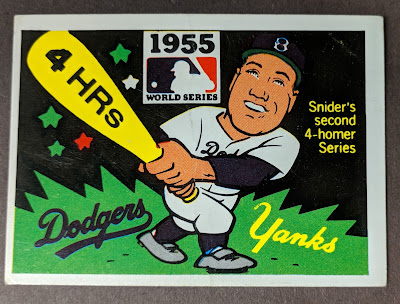 Here's the perfect card for the "We Didn't Start The Fire" binder to upgrade the placeholder for the "Brooklyn's got a winning team" line, commemorating Brooklyn's only championship before moving to LA. Love those great Laughlin cartoons. 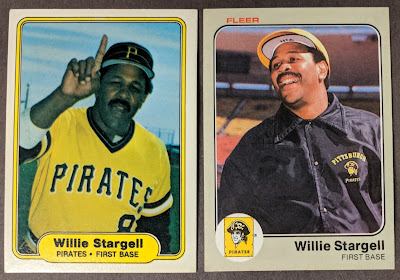 Nice Stargell duo here including the 1983 Fleer card that had been atop my Desperate Double Dozen wantlist for a while. 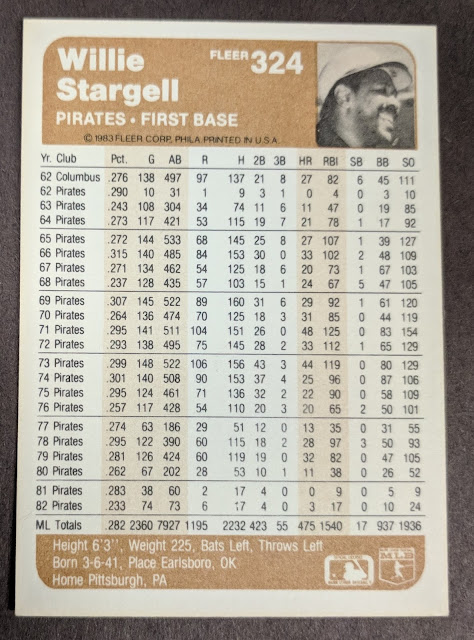 It's a beauty of a sunset/final tribute card. Full career stats, even squeezing in a AAA season. He also got a Donruss card in '83, but of course they truncate stats to just the last few years. He didn't get a '83 Topps card. 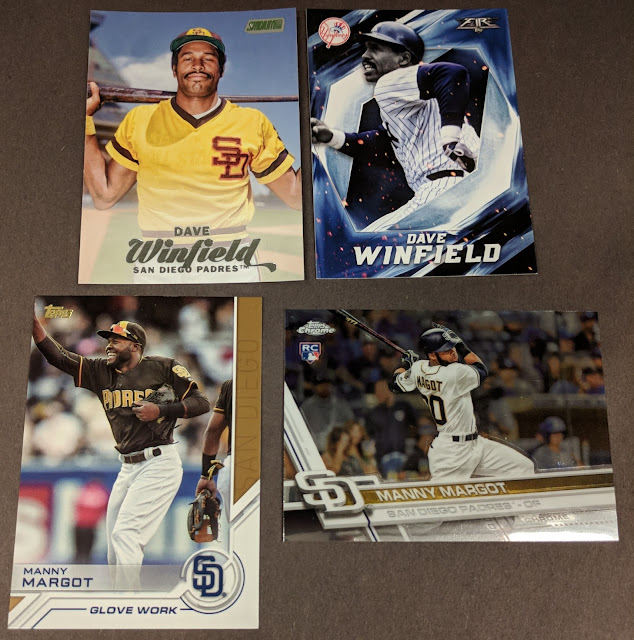 Been wanting that gorgeous Stadium Club Winfield for a while now. Nice Margot additions too. 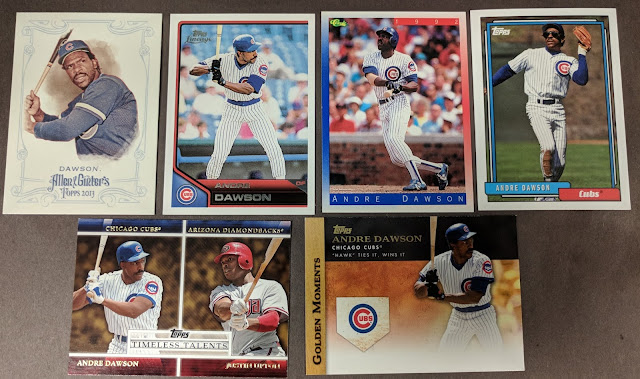 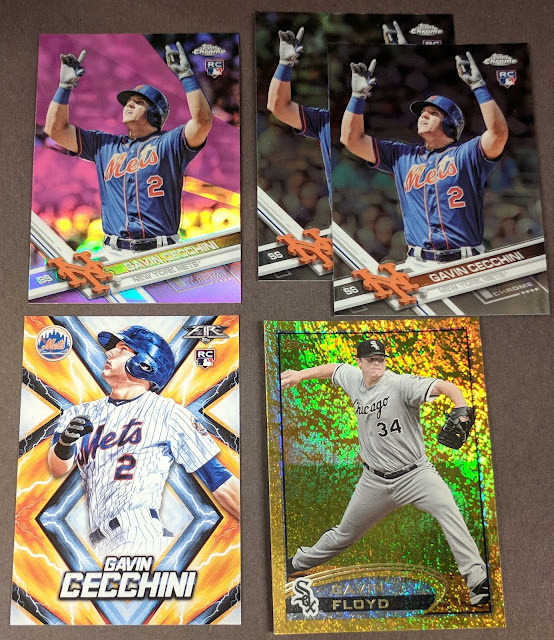 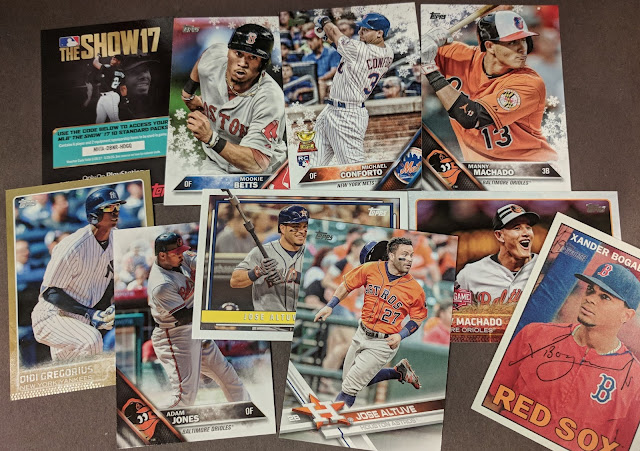 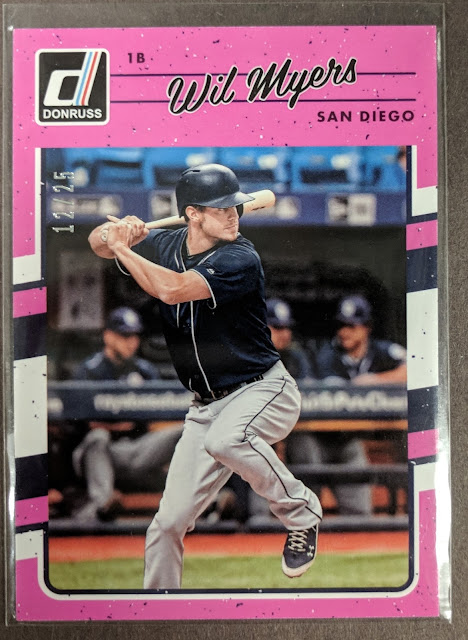 Let's end the post with a big one. I always love getting Christmas Cards in trade regardless of the player/subject, but I really love when it's a Christmas Card of a main guy I collect!

Big thanks, Jim! I'll be getting a return out in the mail to you later this week.
Posted by defgav at 3:25 PM