Here's the rest of my January 2018 card show haul. 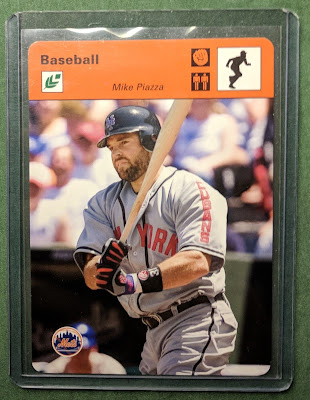 Between card shows and COMC orders, I've picked up a few of these 2005 Leaf Sportscasters inserts lately. I just think they're neat. This Piazza is #'d 17/30 on the back. Seemed like a good deal at 50 cents. 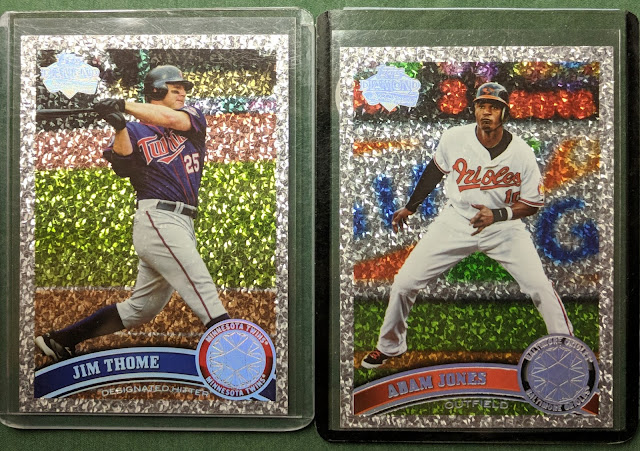 Turns out I've already got these 2 checked off on my 2011 Topps parallel frankenset, but hey, I also collect both these players, so to the respective PCs they'll go. 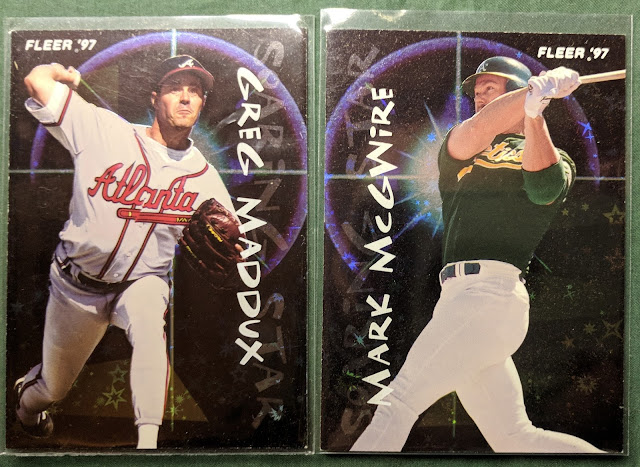 I was just talking about '97 Fleer Soaring Stars inserts yesterday, and how I'm bummed the glow-in-the-dark parallels turned out to be a myth(understanding). Gotta admit I picked up this pair mainly in a hail mary that maybe they glew [sic]. But no, these do not glow. Oh well, still cool cards, and again, I have PCs for both these guys, so they'll have a home in my collection. 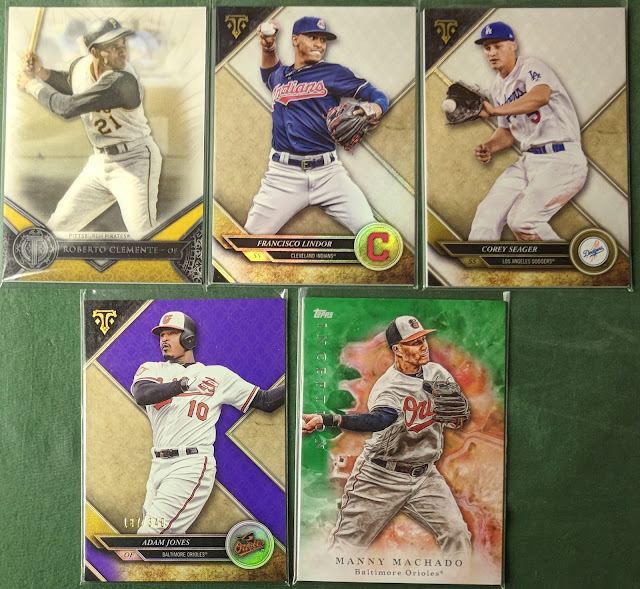 Some non-hits from high-end products.

I hate these cards and regret buying them. But to the PCs they'll go. 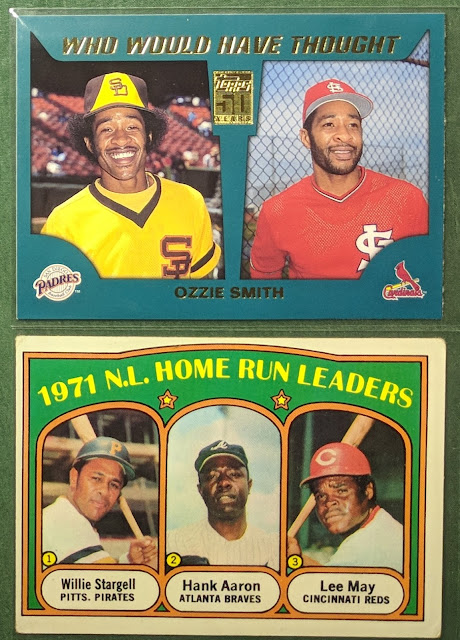 Above is a card reminding everyone of the regretful trading away of Ozzie Smith by the Padres. At the time, it didn't seem so bad. Garry Templeton could play a solid short and hit .300. But Garry's numbers declined in San Diego, while Ozzie became a legend in St. Louis.

I'm pretty sure I already have that 1972 HR leaders card, but at just 50 cents, figured I'd grab a dupe since I collect both Stargell and Aaron. 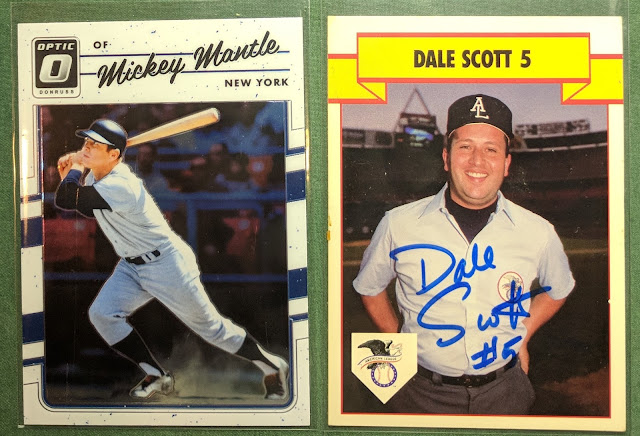 That Optic is my first 2017 Mickey Mantle card. Weird that he's no longer a Topps property.
I've already got a certified autograph of Dale Scott, but was excited to find this signed 1990 T&M Umpires card in the 50 cent bins. Wikipedia is telling me he just recently retired from umpiring due to concussion concerns. All the best in the next chapter of your life, Dale! 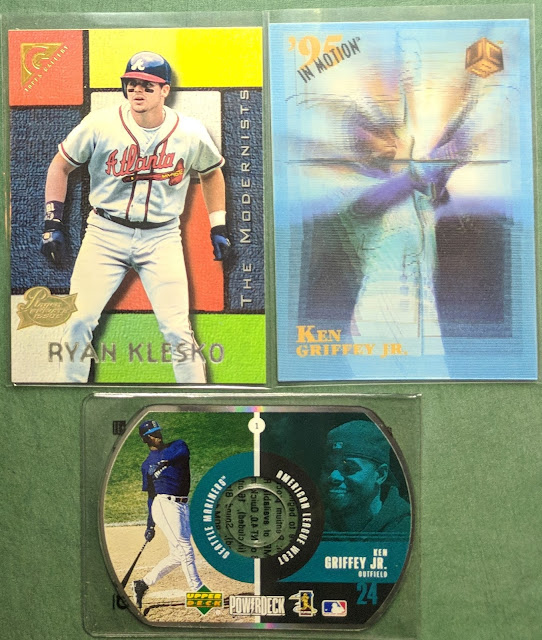 Some funky 90s stuff. The Klesko is a Player's Private Issue parallel and has a serial number "346" on the back (not sure what the print-run was there). Oh wait, I looked it up: "The print run on these cards is 999, but a couple things should be noted. First, the first 100 cards were sent to the players themselves, hence the name of the parallel. Second, it was announced after the 1996 season that Topps destroyed a whopping 400 sets, leaving 499 left in circulation." (source)
Then there's a Griffey lenticular card from '95 and a Griffey PowerDeck cd-rom from '99. I should pop that in and check out the highlight reel one of these days. 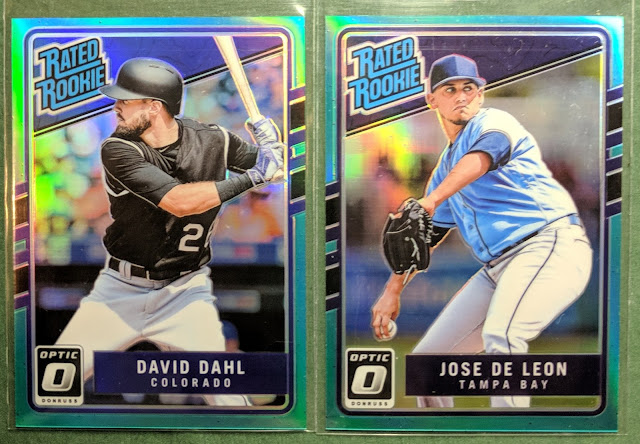 Hard for me to pass up cheap, serial-numbered Rated Rookies, even if these dudes have cooled off considerably since their top-prospect days.

Here's the last group for today, featuring a couple 2017 Gold Label cards. Before I put the Yoan Moncada on my stack, I strained my eyes for like a minute trying to read the tiny text on the front that says what "class" the card is. When I determined that it's Class 3 (a tough pull) I decided to pull the trigger.

So I think that's it for this show's haul, not including cards I picked up as trade bait. I'll probably put up a trade bait post in the next few days (would love to get a flurry of trades going before the 1/21 increase in postage rates), so check back for that.
Posted by defgav at 3:14 PM