I was out the other day, about to see that play my friends were in when I saw a tweet from Raz about an eBay coupon for 20% off a purchase $25+. I only had a little while till it expired (and the play started), so I rushed to find something to use it on. Last time I caught wind of a similar coupon code, I snagged myself a 1957 Topps Hank Aaron. This time I returned to the '57 well, first taking a look at Yogi and Pee-Wee before ultimately deciding on a Ted Williams. 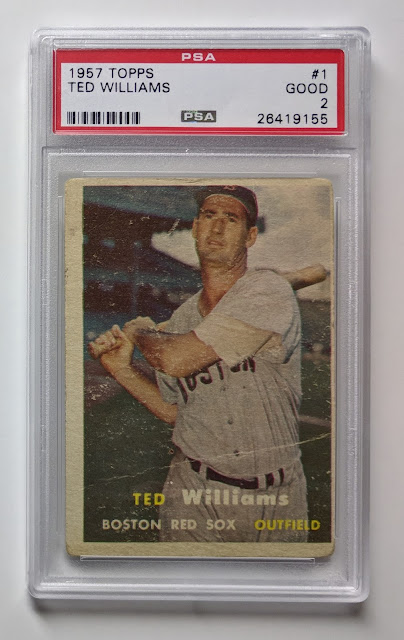 I went with a graded specimen just because of concern over counterfeits (or as they're often known on eBay, "artificially-aged reprint that doesn't say it's a reprint", like that makes it ok), so at least now I can be reasonably assured it's real.

This was definitely a big one to check off my '57 setbuild. While I consider it a long-term project, not expecting to finish it anytime soon, I've made good strides in the past week thanks to this and a few nice card show pickups I featured the other day Currently 22.54% complete, with 94 out of 417 cards. Plus I'm in trade discussions with a fellow blogger that could knock off several more needs, not to count my chickens before they hatch.

Anyways, Ted is the first card in the set, so that makes it a bit more condition sensitive. This one is well-loved, for sure, as well as being off-center, but still looks nice enough. I wouldn't rule out upgrading it someday down the line, but serves my purpose just fine for now.

I believe this is the first time I bought a card on eBay through my phone. But yeah, worked fine. While I would have liked more time to research it, looking at completed auctions, factoring in the 20% discount that's not reflected, it's easily the cheapest sold PSA 2 '57 Ted that shows up, so I think I got a good deal on it. 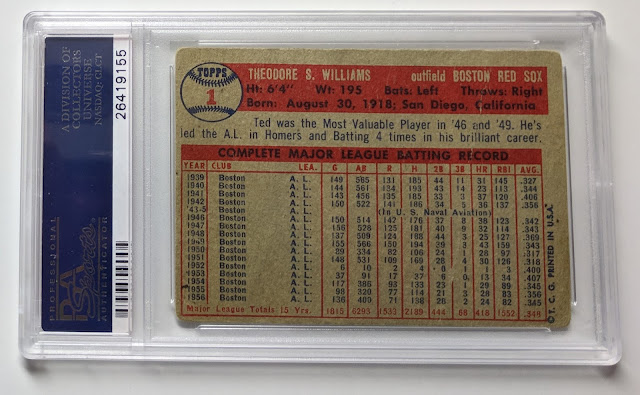 As for the man, what can you say? Perhaps the greatest all-around hitter in the history of the game. On top of that, a war hero and world-class outdoorsman. Just an all-time badass.

This is my first playing-days Ted Williams card not counting one from the Fleer set dedicated only to him. Definitely a great one to pick up. Very nice addition to my collection, and a key card checked off the '57 set I'm working on.
Posted by defgav at 3:15 PM