I was just thinking of Listia the other day when reminiscing about my return to the hobby. I didn't have much disposable income at the time, so instead of spending real money on cards, I pretty much stuck to earning credits on Listia to turn into cardboard. I eventually got a decent job, allowing me to spend actual money on cards, and turned to eBay and the like, leaving the inflation and frustration of Listia behind.

But I logged in for the first time in almost a couple years to take a look. The last item I bought (a Tony Gwynn magnet) was Feb 24, 2016 . The last items I sold were an auto of former all-star (and currently detained drug trafficker) Esteban Loaiza on Sep 21, 2015, and my last hurrah, a couple Vin Scully customs on Apr 3, 2016. (I don't sell customs anymore.)

Digging into my purchase history, I found a few highlights to share and thought I'd get a blog post out of it. 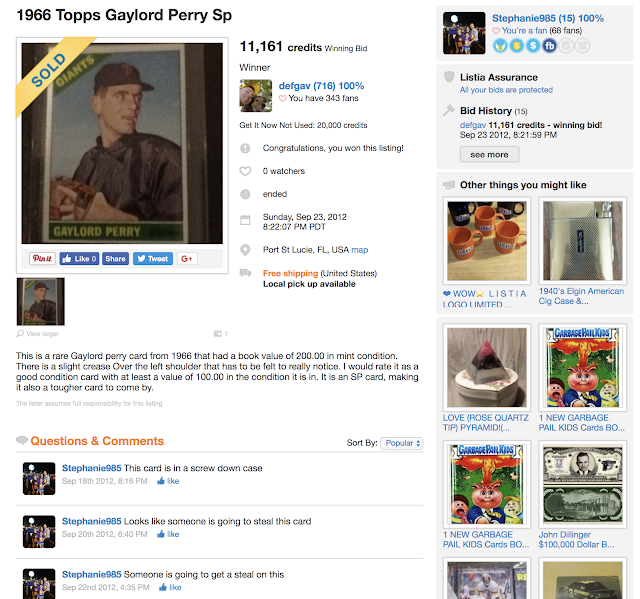 I already posted about this Gaylord Perry 1966 Topps high-number years back, but it's still one of my all-time greatest auction wins. I have no idea what's the current exchange rate of credits (Listia is switching from "credits" to a new form of cryptocurrency now), but I'm sure 11,161 isn't much more than a couple bucks now. I don't think I've ever obsessed over winning a card more than this. It would be the first thing I thought about when I woke up! "Gotta win it! Gotta win it!" These days I'll just set a snipe and put it out of my mind. 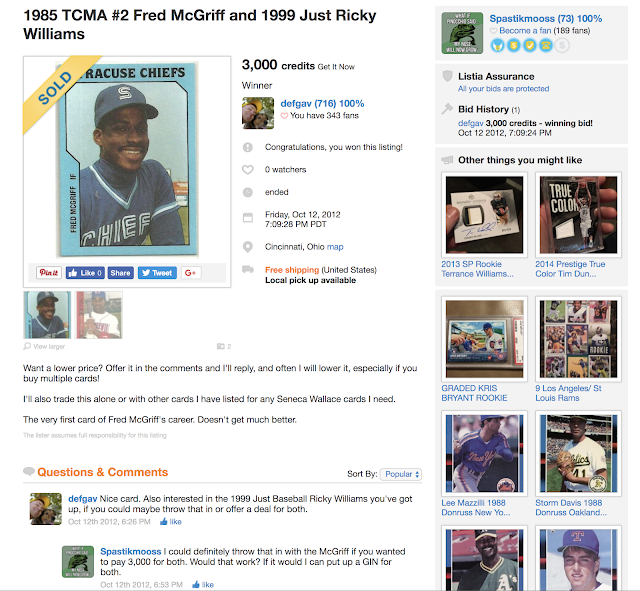 This McGriff is a cool one because it's my first time dealing with a card blogger, back before I started my own blog. Spastikmooss of The Great Sports Name Hall of Fame blog and I have since done a handful of trades, and while this Listia transaction doesn't quite count as a trade, feels like this was an early cardsphere encounter, and as the comments show, I got him to combine a couple separate card auctions into one listing at a good price. Still a highlight of my Crime Dog PC. 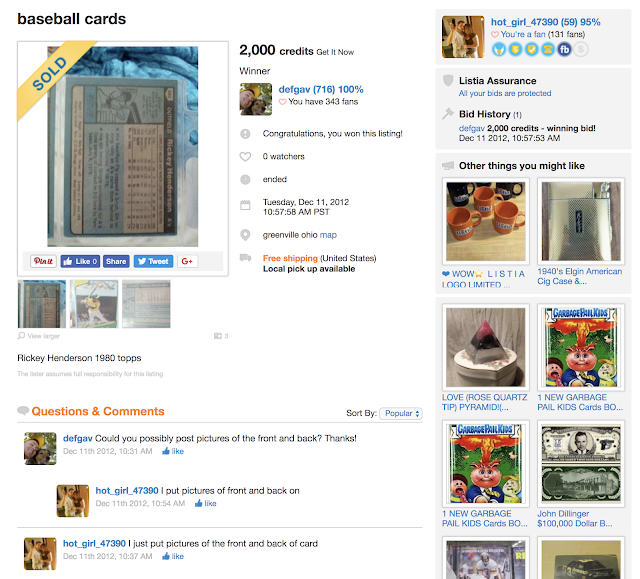 This Rickey Henderson rookie was a steal at only 2000 credits. Almost feel bad for the seller, but hey, that was the "Get It Now" asking price they set. A poor listing title (just "baseball cards") and the main photo being the card back must have limited the number of views it got. I think it originally didn't have any pictures, which is why my comment there asks for some to be added, just to confirm it was legit. I chalk this one up to karma... Back when I was a kid first getting into baseball cards, I stupidly sold a Rickey rookie (I had no idea what I had) to a popular kid for some pocket change and it haunted me for a long time. So scoring this one so cheap felt like the cardboard gods making things right. (Talked more about this in a big post years back.)

So there are 3 memorable Listia pickups from the past. Good times, though I have no desire to get back into that site.
Thanks for stopping by!
Posted by defgav at 5:43 PM