What I'm Collecting These Days (bat around)

This concept is a cool blog bat-around that Night Owl inadvertently started a week or two ago. You get a chance to mention what your current collecting projects are. And a hopeful byproduct of that is that trader buddies will get a better idea of the kind of stuff you'd be excited to get in trade. I sort of think of my wantlist page as like a living blog post, in that it's not just a list of sets and card numbers, and I often update it to better reflect what I'm after at the moment. Names get added and removed from the list of guys I collect, etc. But anyways, here's a post of what I consider my main collecting focuses at the moment. 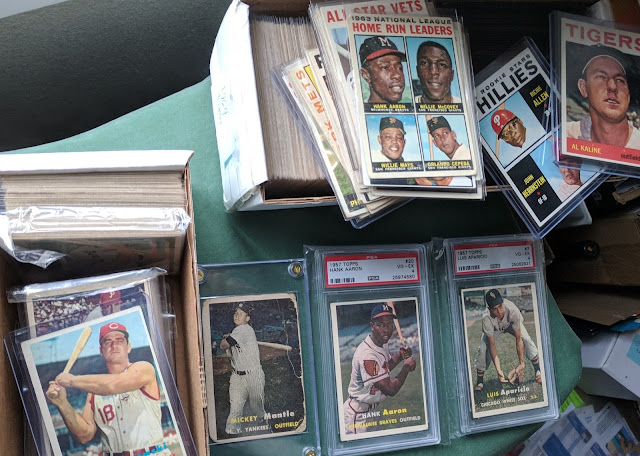 I'm generally a player collector, but in recent years I've dabbled in set collecting, eventually completing 1973 Topps (the GOAT), then 1971 Topps, followed by 1965 Topps last year. I'm currently working on 1957 Topps and 1964 Topps. I'm probably gonna give 1959 Topps a run at some point. But I don't have the long term plan of going after every Topps set like some collectors. Maybe an early 50s Bowman set would be fun to chase if I want to sink significant cash into an old set down the line (maybe 1950 Bowman, since you don't have to worry about Mantle or Mays). But for the next couple years, it's '57 and '64, and then probably '59 ('59 will be a little different for me because I plan to do that one binder-style rather than box). This might be my top collecting passion right now (though this post isn't exactly listing my projects by priority, just typing them as I think of them). If a trader bud wanted to send me something to knock me over the moon, the best would be a star card I need from '57 or '64 Topps. With recent purchases and trades in the works, I'm optimistic it won't be long till I reach 25% complete with '57 and 50% with '64. 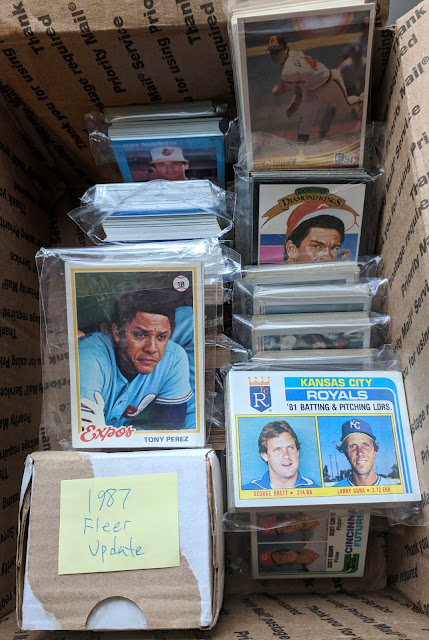 Happy to have recently completed 1983 Topps through trades. A little before that, ARPSmith hooked me up with a complete set of 1986 Fleer. I've been sitting on one common away from finishing 1980 Topps for a few weeks now. And 1984 Fleer is nearly in the books as well. On the horizon after that is 1982 Topps, 1984 Donruss, 1985 Donruss, and 1987 Fleer. After that, probably 1985 Topps, 1978, 1977, and hell, likely 1974 through '84 Topps eventually. I hate to get sucked into doing a "run" though, even if that'd be satisfying. I'd rather just collect my favorite sets and not collect the sets I don't love. But at least '74 thru '85 won't break the bank (George Brett RC notwithstanding), and with help from traders, shouldn't be too tough. 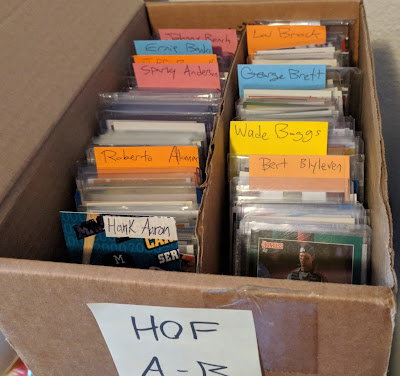 The meat and potatoes of my collection are my PCs. From several hundred Gwynns to a few Bake McBride cards, grouping cards together of my favorite players is how I rolled as a kid and continue today. The "Hundred Card Club" concept helps give me closure. I go for 100 different cards (hopefully including an auto, rookie, maybe a relic and Christmas Card) and I can mentally consider the collection "complete enough" and no longer focus on that guy. There are a handful of players I like enough to keep going after even after hitting 100 cards, such as Gwynn, Bip, Caminiti, Rod Beck, and active studs like Trout and Harper. And I'm a sucker for rookie hype, and will always chase cards of "the next Mickey Mantle/whoever" when I can land them cheap or through trades. 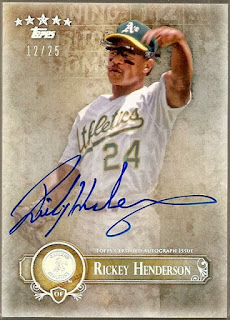 I'm still enamored with cards serial numbered 12/25 or 12/24, though I don't go hunting them down quite as often as I used to these days. There's just too much out there, and they can often be pricey. But getting them in trade? YES! And stumbling upon one when it's a guy I collect? Yeah, I might overpay a little for it. 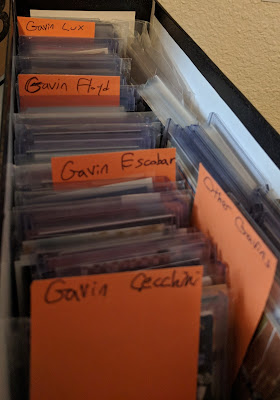 My interest in this one has been waning over the past couple years. As the name Gavin grows in popularity, I can't just go all-in on everybody with that name. LaValley, Lux, Cecchini, Sheets.. Guys named Gavin are popping up in card products more than ever before. Ideally I'd like to pick up a few cards (and hopefully an auto or two) of all Gavins in pro ball, but the days of supercollecting/rainbowing are gone. As far as older Gavins.. well, that's basically just Gavin Floyd. I like him fine, though honestly I get a little tired of getting his 2013 Topps card in trade package after trade package. Unless we're talking printing plate or Christmas Card, the thrill is gone for me receiving Gavin Floyd cards. ..and really Gavin cards in general, other than a guy I don't have any card (or auto) of yet. 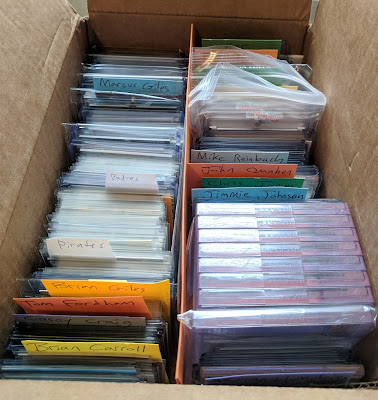 I'm still very enthusiastic about going after cards of pro athletes who went to my high school, Granite Hills. I suppose I kinda think of myself as somewhat of a supercollector of all of them, with the exception of the Giles Brothers who simply have way too many cards to try to chase.. Those guys fall under the Hundred Card Club guidelines (Brian is in, Marcus is probably pretty close). But as far as the more obscure guys, trying to get as many of their cards as I can is a main ongoing project for me. If they've got less than 100 cards out there, I'd like to try getting them all. I'm currently working on a checklist spreadsheet to help me with this, which I'll likely post about soon. 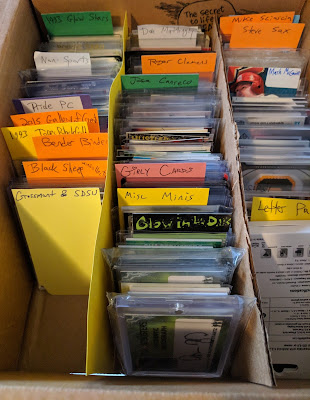 Still trying to get 1000 copies of 1990 Upper Deck Marquis Grissom (I think I might almost be down to double digits needed at this point). Still collecting gay athletes (Pride PC). Any glow-in-the-dark cards. Girlie Cards. SDSU guys. Oh, and the "We Didn't Start The Fire" Binder is a fun project I kicked off last year. Also, I'm thinking I may follow the lead of Red Cardboard and others and do a Flagship Binder, which is one page per set. I need to get some different sized pocket pages for some of the old larger/smaller dimension sets. Would love to hit a page each of '51 Topps up through current, plus a bunch of Donruss, Fleer, Upper Deck, Score, etc in there too.

I'm a diehard Padres fan, born and raised in San Diego County... BUT,, I'm not a team collector. I have no interest in trying to collect every Padres card ever. So, generally speaking, I don't want you to dump your unwanted Padres commons on me. Chances are I either already got 'em or don't want 'em, and will have to just find someone else to dump them on. Exceptions here include current Padres top prospects (link!). So like Padres prospect cards (Bowman, Pro Debut, Heritage Minors, etc) from the past couple years would be cool. I mean, if you send me a big-ass box of Padres cards, I'm sure I'll find several keepers in there, but still I don't like to encourage traders to consider me a dumping ground for Padres. 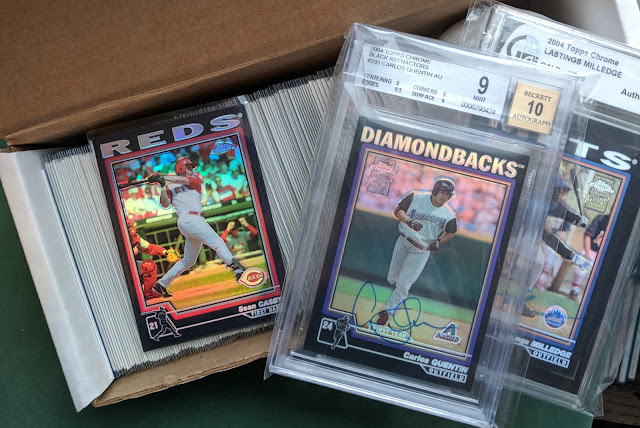 My most frequently searched-for (and most spent-on) set: 2004 Topps Retired Refractors (and to a lesser extent, 2003 and 2005 Retired). 2011 Topps parallel frankenset is my largest endeavor by quantity, still not even halfway done though I've had this going for a few years now. 2004 Topps Chrome black refractors parallel set is a cool one to work on, but they're scare enough to where this is a slowburn project, not a main focus. Still working on my ARMS.. Archives Reserve Master Set (I've got all the base sets, just got autos and and relics to slowly tick off.. oh, and the darn Future Rookie Reprint insert set). 1987 Bohemian Hearth Bread Padres (3 to go). 2017 A&G Constellations. Just 1 sticker away from completing 1993 Upper Deck Glow Stars (Sandberg).

So there you go. That's basically what I'm collecting these days. Thanks for reading and if you've got something I need, please get in touch if you wanna perhaps hash out a trade.
Posted by defgav at 4:06 PM