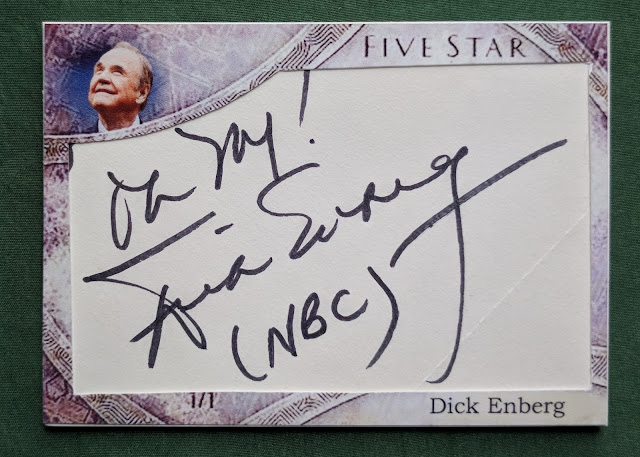 I love making custom cards. And I really love when I can take a boring autograph and spice it up into a custom card. This post will take a look at some custom cut-signature cards I whipped up recently. (Actually, this post has been sitting in my drafts for a couple months.) 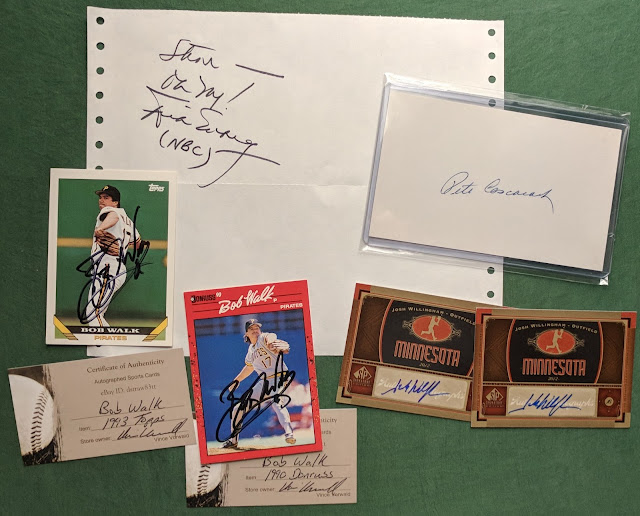 Here's what I started with. My bud JBF Wes approached me with a couple Bob Walk IP autos and Josh Willingham stickergraphs asking if I could make them into something cooler. I was up to the challenge. (The Bob Walk cards were obviously cannon fodder for his ongoing cardboard war with Matthew Scott, so I had to sit on publishing this post for a while not to ruin the surprise. But he received them the other day, so I've got the greenlight.)

But first let's start with the Dick Enberg I made for myself. The legendary broadcaster passed away on December 21, 2017. At the risk of coming off as a vulture, as soon as I found out, I headed to eBay to see if I could find any inexpensive autographs. Honestly I had been meaning to do this back when he was still alive, but never got around to it. I remember earlier checking if he had any autos available out there, but turns out he doesn't have any pack-certified auto cards (none that I could find, anyways). I think his only real card is in 1989 Pro Set. So the custom card route it is!

I found this auction simply titled "DICK ENBERG autograph" with the description reading "obtained by me at DFW airport 1984. $10k guarranteed authentic!" $13.95 with free shipping... worked for me and I pulled the trigger. Looked a little large for my custom-card-making aspirations, but workable. The seller was named Steve, so I assume that's who the signature is made out to, though it's not very legible. I have no reason to believe this isn't authentic. Dick was known to be generous with his autograph. A forger would be very unlikely to include personalization. It's on old-school printer paper and the signature crosses a page perforation. If it was counterfeit, they would have done a better job. So it's 100% legit as far as I'm concerned.

Very happy with how this turned out! Borrowed an existing Topps Five Star design rather than whip up something from scratch. I had to extend the window bigger that I would have liked, but I eventually was able to get it lined up to where it looked good and didn't cut off too much (It's such an annoyance when a card company obscures or otherwise edits out part of a signature in cuts like this). I was fine with losing the "Steve–" part. The top of the "M" and bottom of the "Y" just barely fit in together snugly. The only unfortunate loss was the top of the exclamation point, but I can live with that. 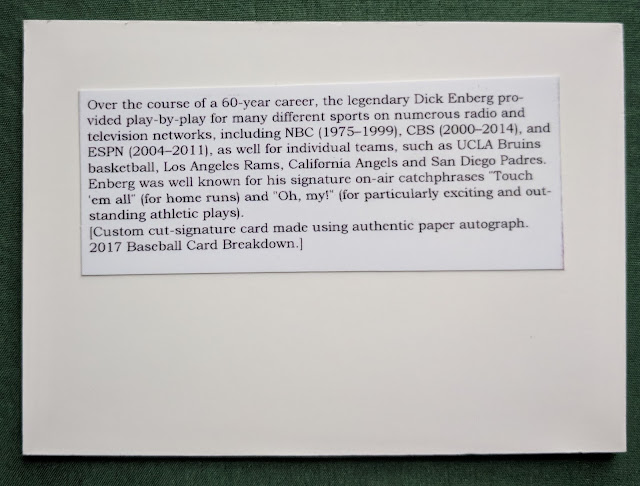 I didn't do much for the back on this one, just a little bio paragraph. 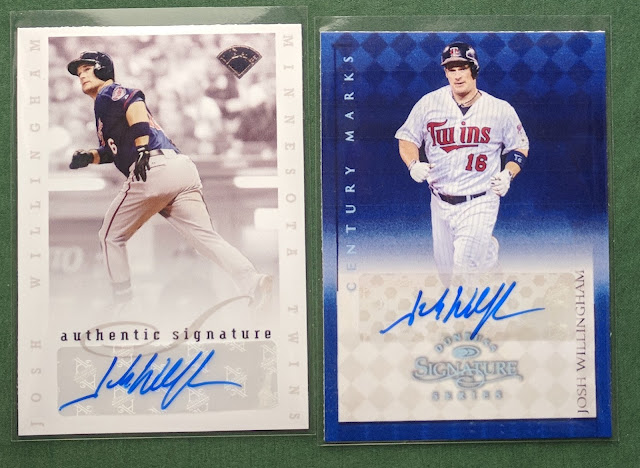 Really proud of these Willinghammers! Wes seems pretty stoked with them, too. They're in the style of 1996 Leaf Signature Extended and 1998 Donruss Signature Series, respectively. Josh doesn't seem to do TTM, or otherwise I would have just tried to get the customs hard-signed. This was my first time ever peeling off a sticker auto and placing it on a custom. Usually I just do custom overlays, leaving the original card untouched. But with Wes' blessing, I went for it. It wasn't perfect, as the stickiness mostly stuck to the original card, though it was enough to work with, and was fine with a tiny bit of glue added to one side. Some tamper-proof design may have also been activated on the stickers as they were peeled off, though I don't think it hurts the look of the customs much. 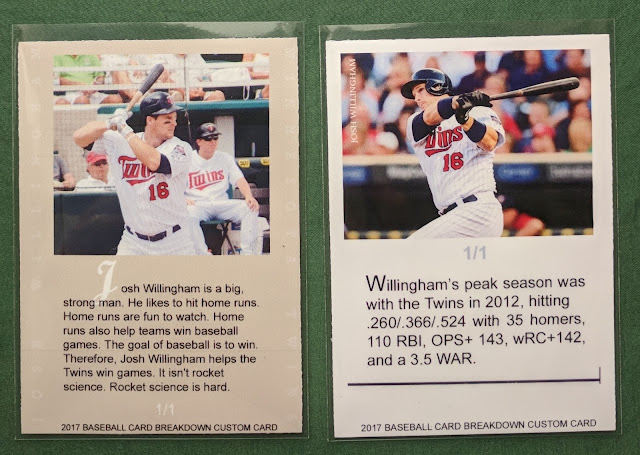 I even made backs that are semi-faithful to the original designs. I was too lazy to type up original blurbs, though, and both of these were copied and pasted straight from the internet.

I absentmindedly dated all these cards "2017" on the bottom. It was actually mid-January 2018 (over MLK weekend, to be specific) when I made them. D'oh! 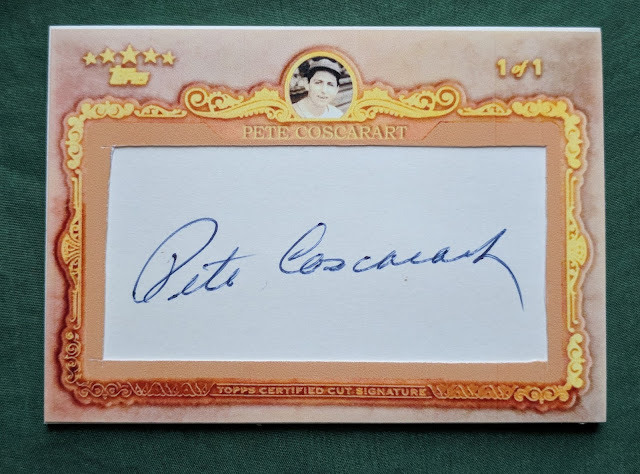 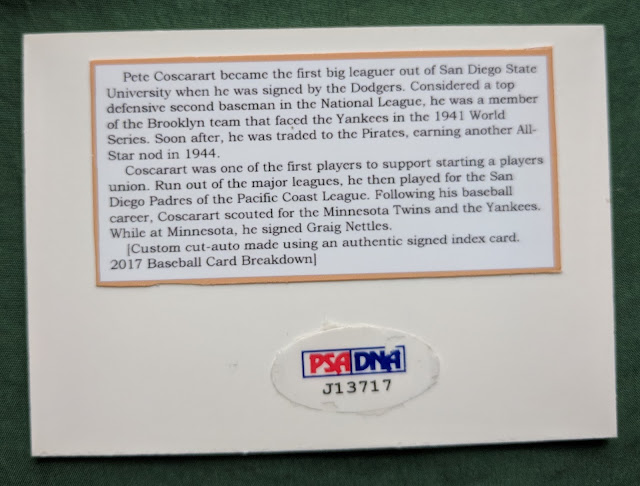 Pete Coscarart is an old-timer up my collecting alley thanks to his SDSU and Padres ties. I think the card I turned a signed index card into came out pretty well. The index card was even PSA/DNA certified with a sticker on the back, so I peeled it off and affixed it to the back of the card. 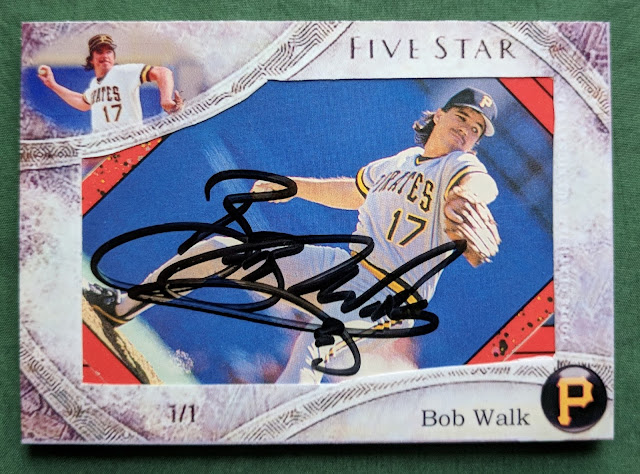 And now to the Bob Walks. These use the same Five Star templates as seen earlier in this post. I was glad I was able to fit in most of Bob from his '90 Donruss card on this one. 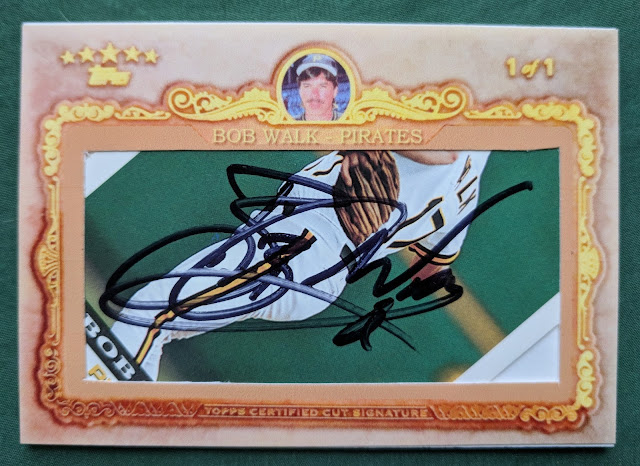 The autograph on the '93 Topps card was a bit too large to get all of Bob in the cut, unfortunately, but still turned out cool enough. 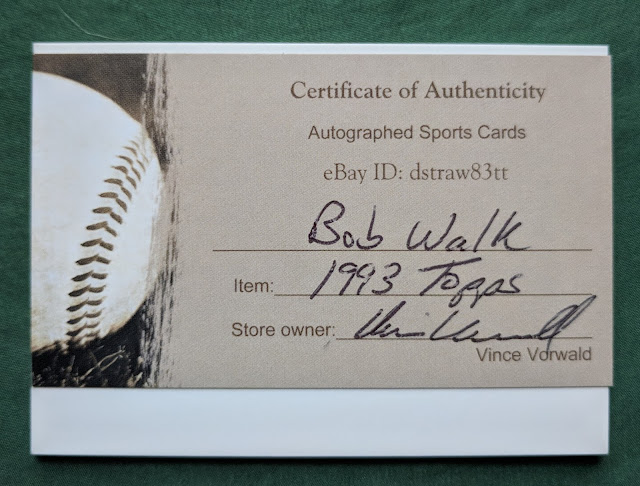 I affixed the COA business cards to the back of each. Because why not.

So there you go, some neat custom autos for me, Wes, and Matt created out of less interesting sources.
Thanks for reading.
Posted by defgav at 4:04 PM