Big thanks to Kyle D. for knocking off my last 5 needs for 1983 Topps! 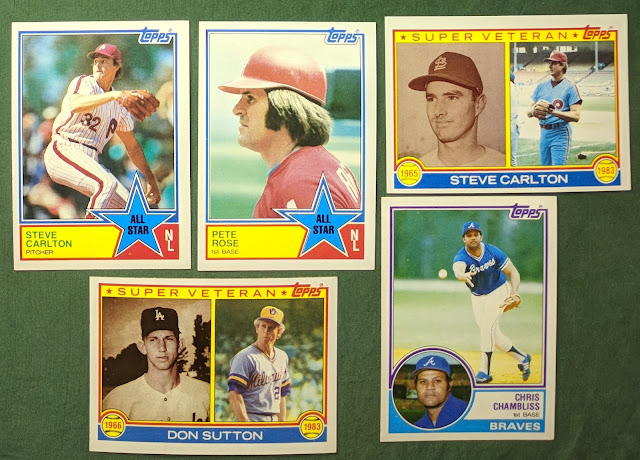 Feels good to check this one off. It's an all-time classic design, with its well-placed dual photos and whatnot. The All-Star cards are sharp, and the Super Veteran subset is a novel addition. Topps is doing its best this year to make collectors sick of '83 with a massive insert set using the design, but it's a hard one to hate.

As a lifelong Padres fan, the set has a soft spot for me thanks to the Gwynn rookie, and you've gotta respect the Sandberg and Boggs RCs rounding out the Big 3 trilogy. 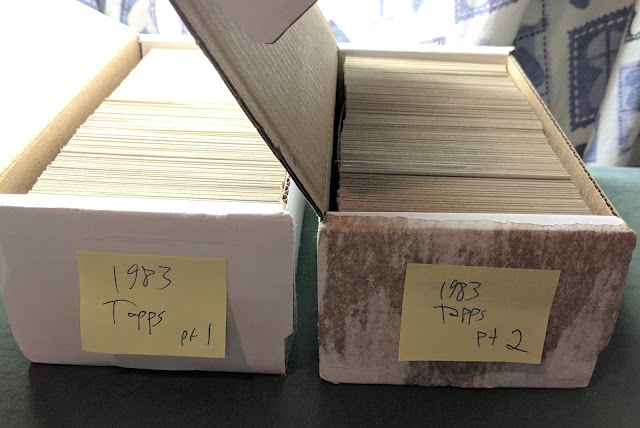 Unfortunately I don't have any free 800-count boxes at the moment, so for now the 792-card set is split between a couple 400-count boxes. I'll have to remember to check out one of the guys at the card show that sell supplies next month. (though looking at how nice those big 3 rookie cards look next to each other with the different color outlines, I'm almost tempted to think about bindering it, though I'm not much of a binder guy.)

I'd also like to pick up the Traded set someday to compliment the main set, but no rush there.


("Every Breath You Take" was apparently the biggest song of 1983.)

When I was a kid, I bought (or rather received as a gift) a complete set of 1989 Topps from the Sears catalog (since jettisoned), but other than that, this is the first Topps set from the 80s I've ever completed. And cooler yet, it's the first set I've ever completed entirely through trades, no purchases! Mad props to the cardsphere and all the traders who've helped me piece it together over the past few months. 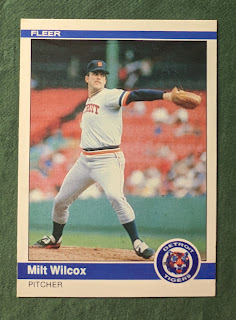 I believe this was my first trade with Kyle, a super smooth PWE exchange, and he also hooked me up with the 84F Milt Wilcox I needed, bringing me to within 3 cards of finishing that set (Rickey, Ryan, Gaylord HL).

But back to '83 Topps, I thought it was kinda funny that Chris Chambliss turned out to be the final card that I tucked into the box, funny not just because it's the last card in the set (#792), but also because I made a dumb gif of it years ago...

Thanks for reading and have a great weekend!
Posted by defgav at 3:13 PM

Email ThisBlogThis!Share to TwitterShare to FacebookShare to Pinterest
Labels: 1983 Topps, Joy of a Completed Set, trade