I hadn't done a group break in a long time, but recently jumped in and snagged the Angels in Nacho Grande's break of 3 hobby boxes of 2018 Topps Heritage. I was hoping for an Ohtani (preferably an auto, but even a base SP would've been cool), and/or a nice pull from Mike Trout. But sadly I got shutout there. 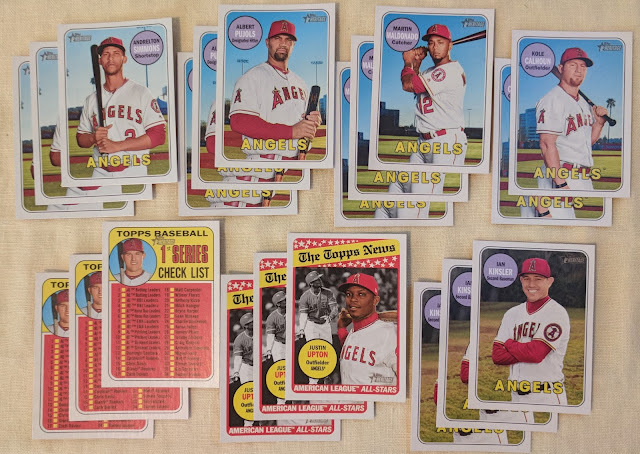 The collation sucked in the 3 boxes. I didn't even get one single Trout base card or All-Star card (which is also a base card), neither of which are SPs. No inserts, either. At least I got his checklist card, I guess. 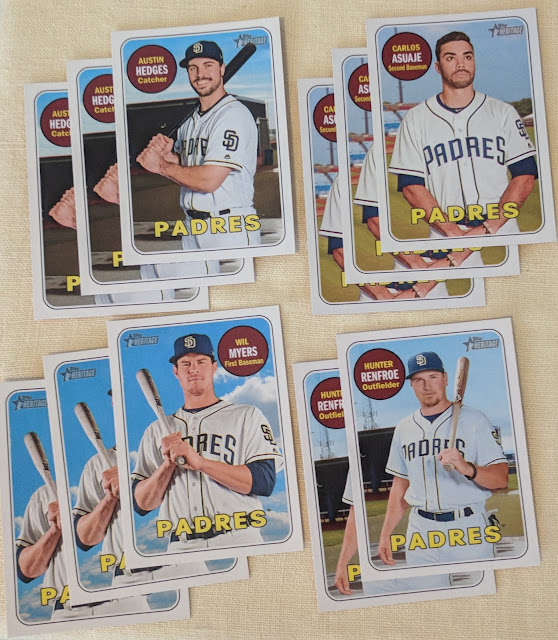 Each slot in the break also came with a randomized bonus team. I coincidentally lucked into the Padres which is cool because they're "my team", though not exactly bursting with value, and plus I will likely end up with these base cards unsolicited in trades over the next few months. Again, the crappy collation of the boxes gave me 2 or 3 copies of half the team set, and zero copies of the other half. That's ridiculous. How is it 2018 and Topps is still struggling with the technology of properly "shuffling" their cards?? Shouldn't be that hard. 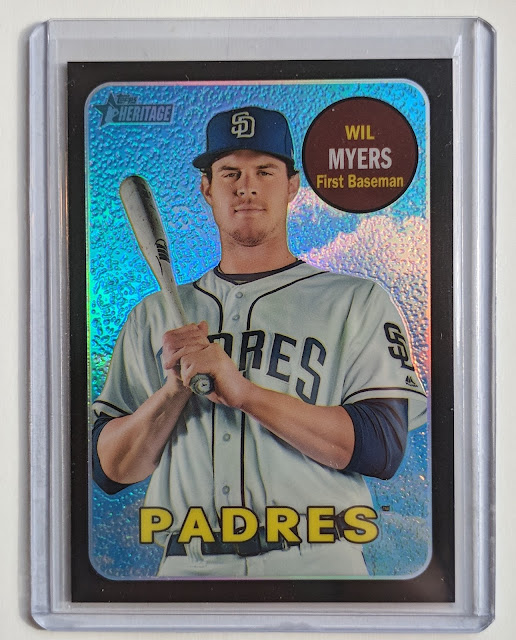 And one nice pull I ended up with was this /69 black refractor of Wil Myers. That definitely made me feel better about my haul. He's a guy I collect, after all. Hopefully having Homser in the lineup takes pressure off him and he can relax and have a great year. I know some collectors don't particularly like chrome cards in Heritage, but I think this one looks great.

Chris also ripped a few lower-end packs as bonuses in the break, and I was able to find some keepers there.

Thanks a lot for the break, Chris! It was fun, even if we didn't score many big hits.

On the same evening as Chris' break, I also decided to snag a spot in a break via eBay. It was a player slot in a case break of 2014 Bowman Draft (which recently got back on breakers' radars thanks to Rhys Hoskins having a card in the set). I threw a bid on the Gavin LaValley slot and ended up being the only bidder, so at least it was cheap. I have already completed that rainbow besides the superfractor and some printing plates, but I figured in an entire case I might have a shot at those 1/1s, or at least a nice dupe of a low numbered parallel. But guess what, I got shutout there too. Boo! 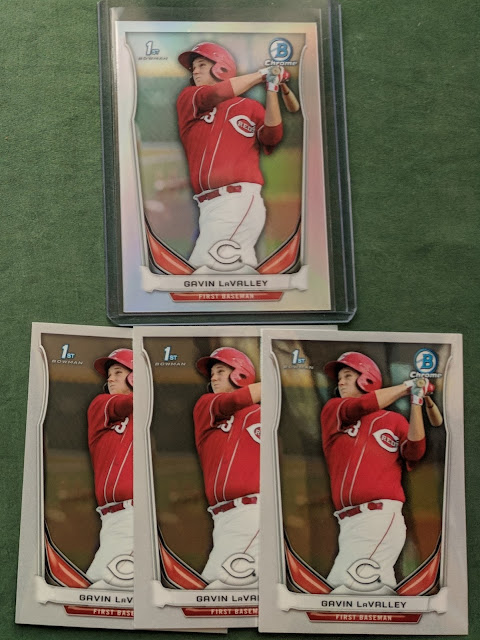 Here's all I got. One base refractor and 3 base chrome cards. It was one of those auctions where the base paper cards don't ship. And while I knew that going in, it still sucks. The funny irony of it all is thanks to crap like this, the base paper is actually scarcer and worth more, per COMC:

The "crummy old paper" base card that isn't worth shipping out, according to many breakers, is going for twice as much as the chrome parallel, even more than the refractor parallel, and there are much less of it available. Pretty funny.

Anyways, since then, I've deleted my saved search for Gavin group breaks. I'll probably still jump on a cardsphere group break once in a while because those can be fun, but I really gotta stay away from other group breaks and just pick up cards on the secondary market.

Thanks for reading and have a great weekend!

Oh, and every card in this post besides the Wil Myers parallel is available for trade (and I'll keep one each of the guys I collect). So if you're working on '18 Heritage and need any of these, check out my wantlist and get in touch!
Posted by defgav at 3:15 PM