Wow, this is a big one for me. As far as Baseball's Living Legends, I have an autograph card of Willie Mays, Koufax, Nolan, Rickey, Griffey, Yaz, Bonds, but the big name left for me was true home run king, Hank Aaron. 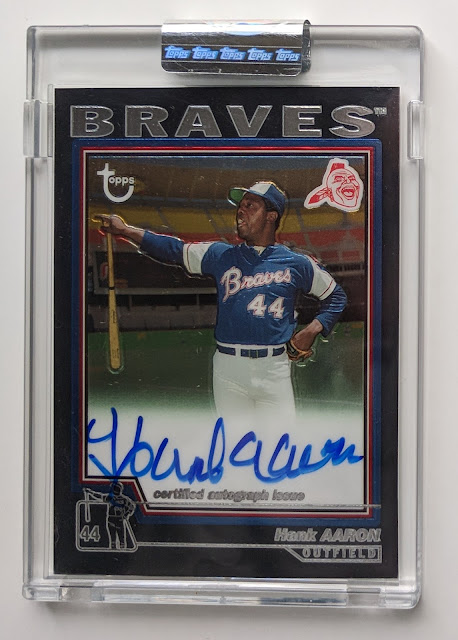 Check out that beauty! Very happy to finally land a Hank Aaron auto for my collection! 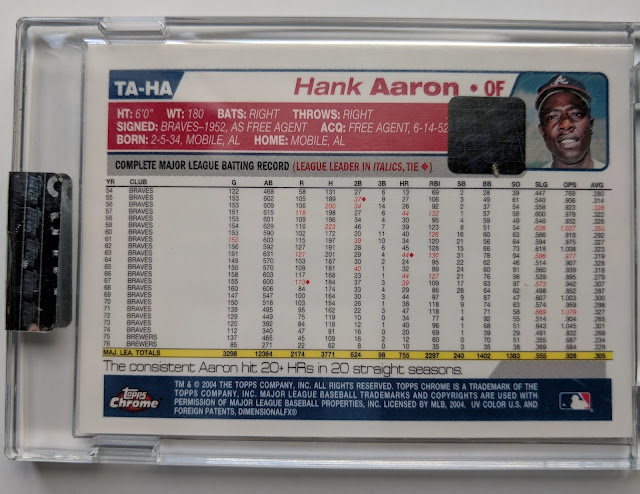 And not just that, but the Hammer here completes my autograph set for 2004 Topps Retired, the cornerstone of my collection. It's the 2nd auto set I've completed, hot on the heels of my recently completed Ghostbusters auto set.

This is a big deal for me! Dig way back into the Baseball Card Breakdown archives and you'll find this set was the subject of the first "real" post I ever made (after a couple of lame "hi and welcome to my blog; I'm a newb!" posts). So this is several years in the making, and the completion of my first collecting goal since returning to the hobby as an adult, one that was a big part of the motivation for me to originally start this blog in the first place. I remember back in 2012, as I was dipping my toe back into the hobby, I won a cool looking Bill Madlock auto on Listia and liked it so much I decided to jump into the deep end and collect the whole set, which happened to be 2004 Topps Retired. And from there I was hooked again. Feels good to finally edit the last of the red text off this below checklist I've been working from for years:

My "ultimate dream goal" in card collecting is to complete the refractor auto set for 2004 Topps Retired. So that means I would eventually like to "upgrade" this Aaron to the refractor parallel, though I'm very happy with this base for the time being. But yeah, 19 refractors left for me to focus on in the years going forward. Many of these I've never even seen, and almost question if they were even produced. For example, last year when Darren Daulton sadly passed away, a lot of copies of this auto popped up on eBay.. but zero refractors! Hmm. And when Alan Trammell recently got elected to the Hall of Fame, seems like there was a bump in his autos on the market, but no '04 refractors. So yeah, these are tough. But I'll keep on being vigilant. Maybe someday I'll get that list to be completely blue.

But for now at least, I'll enjoy the accomplishment of having all the autos from 2004 Topps Retired Signature Edition (not counting the dual autos that I'm not chasing), a sweet set that played a big part in getting me back into collecting. 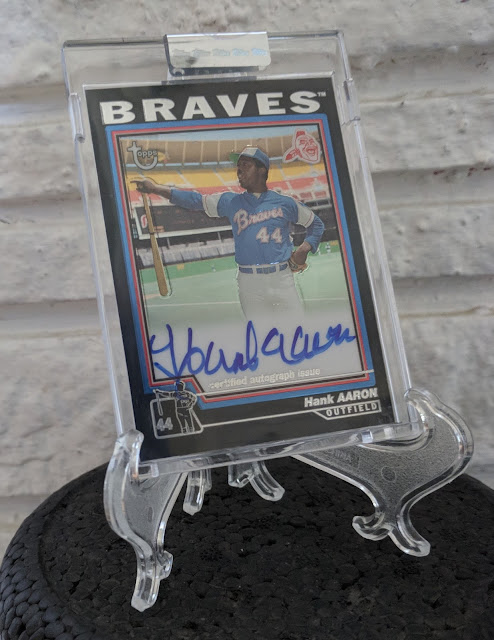