Starting another dumb project + a great idea to save baseball

I mostly bought vintage cards at last weekend's card show, but a few modern cards snuck into my stack as well. Let's look at a few such cards now. 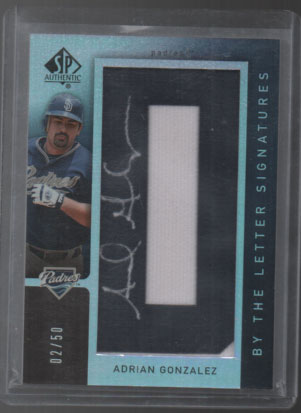 This is the only "under the glass" card I bought, everything else was out of the $1 bins. The guy ended up letting me have it for just $5. It's an Adrian Gonzalez auto, from his Padre days, and what really got my interest is it's a patch of the letter D. One of my dumb collecting goals is to spell out BASEBALL CARD BREAKDOWN in letter patch cards like this one, and then that'd eventually be used as my blog's header. That's the idea, anyway. It takes two Ds, so that knocks off one. Overall, that's 1 letter down and 20 to go.

Adrian's having a good season. I'm not really actively collecting him anymore since I hit the 100-card mark for that PC. But it was a great price and fit in well with a project of mine, so I went for it. 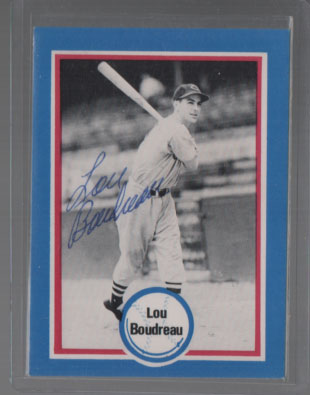 An old school Hall of Famer autograph for a buck is tough to pass up. It's not certified, but seems legit to me. The card is Lou Boudreau 1976 Shakey's Pizza #115.. Hmm, I didn't think it was that old. I would have guessed around 1982-1985. There was also a similar autographed card of an umpire which was one of the last cards I trimmed from my stack getting it down to 50 cards. Can't buy every cool card.

Back to Lou Boudreau for a moment, I hadn't realized that in 1948 he not only was AL MVP, but he also led the Indians to a World Series Championship.. as manager! I really miss the days of player/managers. I hope that comes back into vogue again someday. I've said it before, but I really think it'd improve the game if the entire uniformed coaching staff was legally able to enter the game at any time as extra guys off the bench. How fun would that be?! They're already suited up, why not?! PLEASE, Rob Manfred, make it happen! The minimum age limit for this player-coach clause should be set at like 35 or 40 to prevent ringers. I firmly believe this would save baseball. How great would it be to see an old grey-haired guy enter the game in left field as part of an extra-innings double switch? Paul Molitor could get a couple pinch-hits to up his career total. Pitching coaches could be an emergency arm out of the pen. Let's start a grassroots movement for this! Who's with me? LET THEM PLAY! LET THEM PLAY! #letthemplay 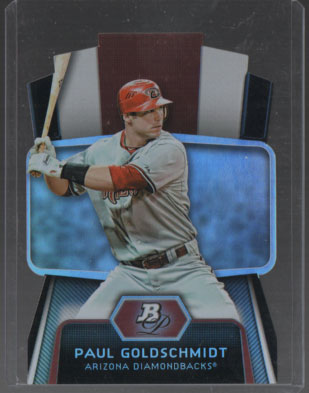 Goldschmidt die cut. Probably overpaid for it, but it's nice enough. 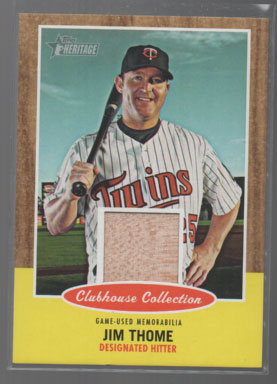 I feel I'm close to adding Jim Thome as a PC guy, but haven't officially pulled the trigger. (Or have I? Sometimes I lose track of who-all is on my "guys I collect" lists.) I thought this bat relic was a fine looking card for the price.

That's all for today. More cards tomorrow.
Posted by defgav at 3:58 PM