Here's a couple trade posts in one, covering a two surprise card packages that showed up over the past week or two.

First up is Julie from A Cracked Bat, dropping some Padre love on me..

The Big 3 acquisitions last off-season. I like these guys. It's hard to be a loyal collector when pretty much everyone is available if the right deal comes along, but hopefully these guys are with the team next year. (Glad I didn't decide to PC Craig Kimbrel to heavily!) There've been rumblings about moving Shields lately, which I kinda hope doesn't happen as I've just finally gotten a respectable PC going for the guy, with this pink refractor being a sweet addition. That Kemp is my first card from that 1951 Heritage set-type-thing. Pretty cool. And then there's a #'d Wil Myers. I still think that Triple Threads logo looks like a medieval robot wang, especially when it lines up with a player's crotch, but otherwise those are some nice looking cards. 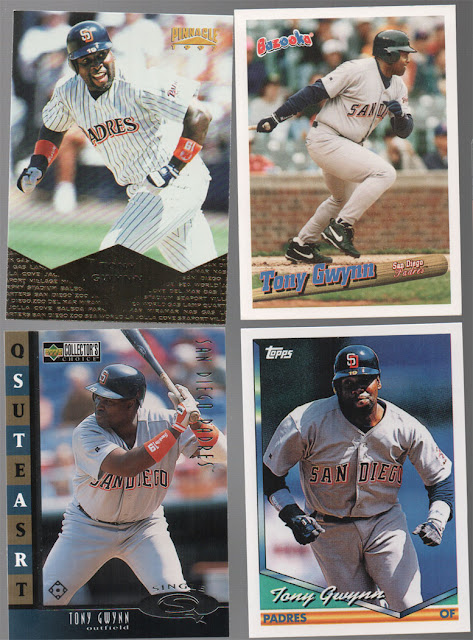 A fine lot of Gwynns this is! The '94 is a CYMTO reprint.

In this scan, Brian Giles and Greg Maddux enjoy some horseplay. A couple very neat cards! 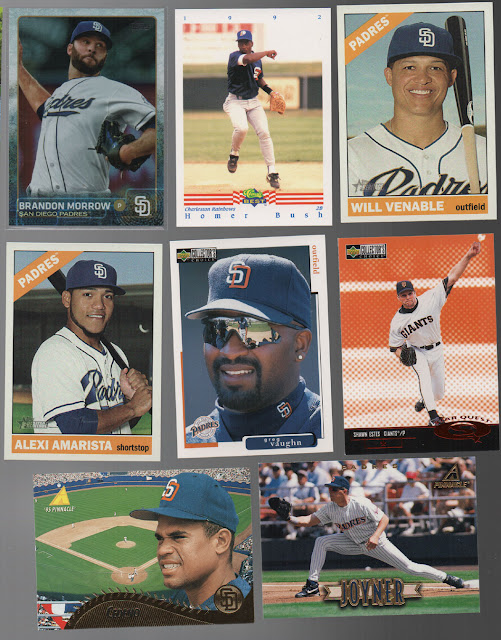 And the rest! Julie has a pretty good sense of humor, with her blog posts often eliciting a giggle or two, and she must've thought she was being really flipping funny slipping in a Giants card. I was fuming, let me tell ya!

Nah, I'm just playing; it's cool. Big thanks, Julie! These cards were a wonderful treat. I'll be sure to send you out a return package soon.


Next up is a package from Mr. Zippy Zappy. I don't think this was an official Zapping, as there was no hallmark "You've Been Zippy Zapped! ϟ ϟ" note along with the cards. So I guess it's just a standard card package, perhaps in return for the bunch of Robbie Alomar dupes I sent him by request a while back. But any card package is a very good thing coming from the generous Mr. Zappy. 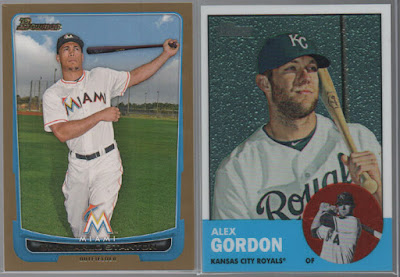 Vintage Padres. LOL at that Don Mason. I know I say I accept any condition in my 71 setbuild, but that's pretty rough! Lucky for me I already got that one. 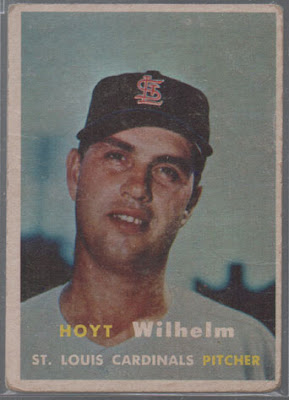 This lovely '57 Hoyt Wilhelm was probably the star of the whole package. While I've already got one in my Hoyt PC (the first "good card" I ever bought at a card show), the good news is I have dreams of working on the 1957 Topps set one day, so now I've got an extra to dedicate to that. 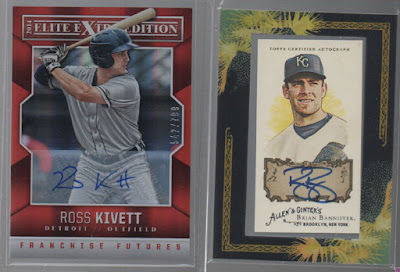 Always love to get autos in a card package, even a non-prospect such as Ross Kivett. Brian Bannister has a great double-B signature that's pleasing to behold. 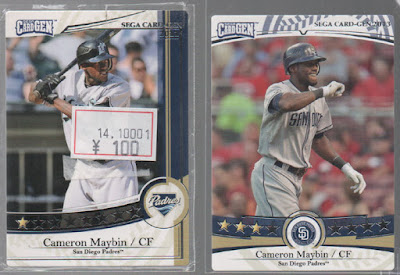 A twin billing of Maybin Sega CardGen cards! Imported from Japan! You bet I'm leaving that yen price tag on the sleeve for added authenticity. 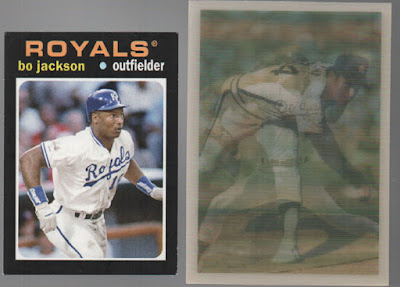 Here's a Bo and a Sportflics with Nolan Ryan, Fernando, and.. um, I wanna say Mike Scott? Can't remember. 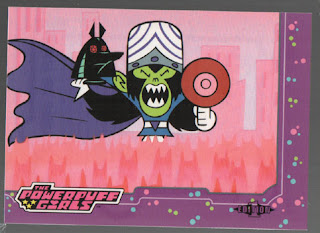 Cool, my first Powerpuff Girls card! I've showed off some neat stuff Craig McCracken (the show's creator) gave me a while back, but never had any cards. I hear the show is getting a reboot in 2016.. hoping it's a hit. 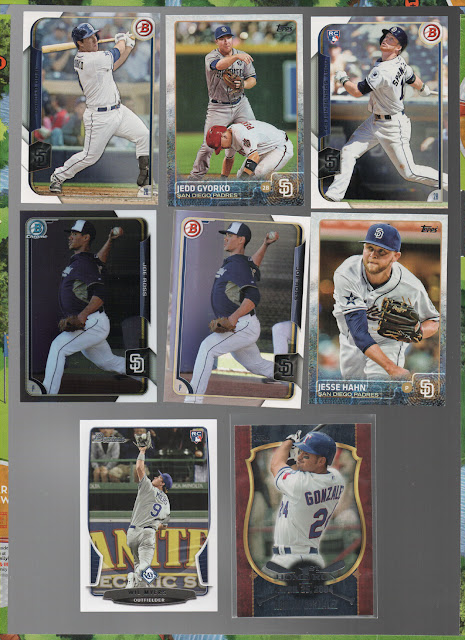 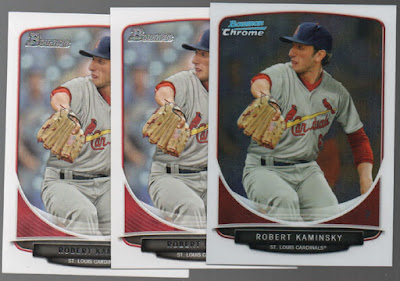 Zippy bipped me, perhaps because I once commented this isn't a flattering picture of the guy. Zippy has a wise-ass sense of humor like that! lol 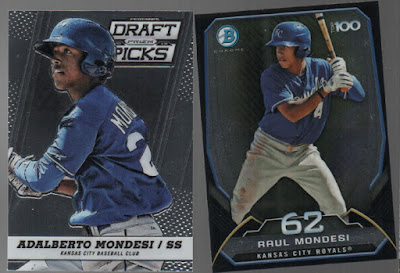 Are these the same guy? The Mondesi family is confusing. 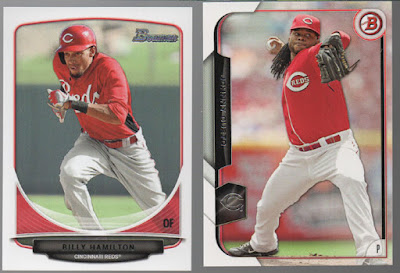 Exciting Reds. I almost want to start PCs for these guys. 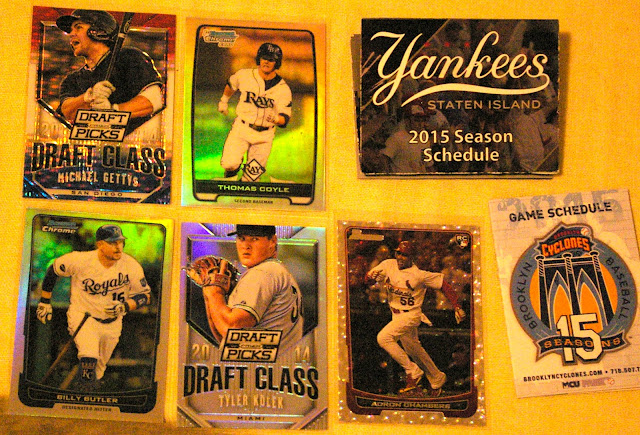 Refractors! (Sorry for this subpar photo, but I was trying to display their splendor in a way that my scanner can't accomplish). Also pocket schedules of the Staten Island Yankees and their hated rival, Coney Island Cyclones. ..which always make me think of a song from one of my favorite bands...


And these were just the highlights from the big stack of cards he sent.
Great stuff.. thank you deeply, Zippy! I'll be flinging some cards across the country to you soon, really.
Posted by defgav at 3:32 PM