Gavin Glanz signed that middle card for me earlier this year, and it's my only TTM autoGav to date. Today is his birthday (12/13).. Happy Birthday, Gavin! 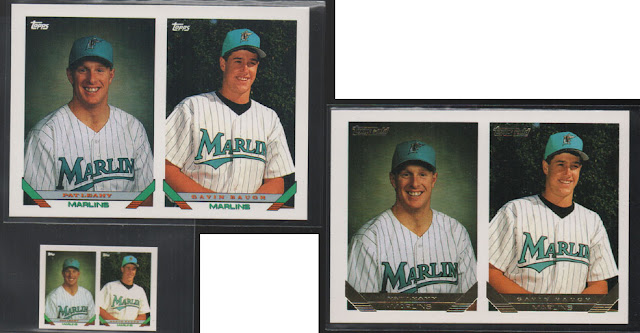 I've got a rainbow going here for Gavin Baugh, with the base card supplemented by a gold parallel and a micro. Baugh was the first baseball playing Gavin to ever appear on a Topps card. He never came anywhere close to the majors, though, nor did his cardmate, Pat Leahy. But at least they got on a mainstream card.. that's pretty cool. 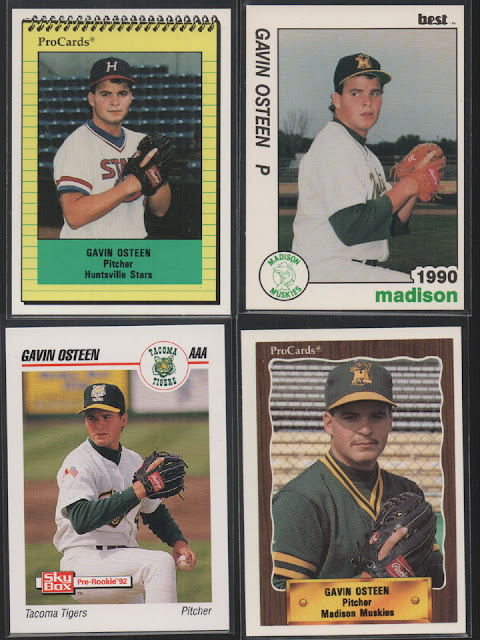 Gavin Osteen is the first Gavin whom I ever owned a card of, pulling a copy of that woodgrain-bordered ProCards card back in the day. Sure was a trip to see another guy with my relatively obscure name! Dodgers fans are more familiar with his father, Claude Osteen, an All-Star pitcher for Los Angeles in the 60s and 70s. Gavin came close to cracking the bigs, though illness and later an injury got in his way. 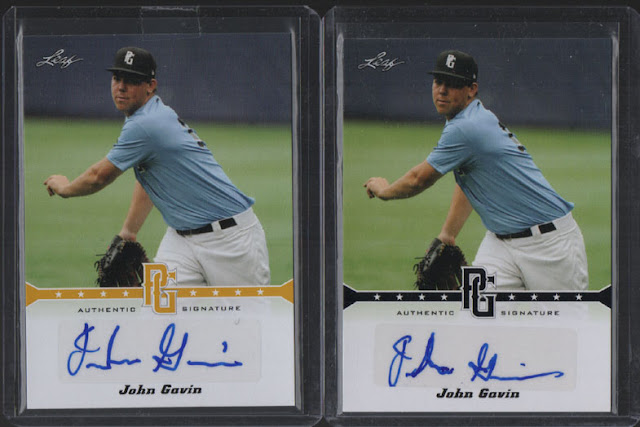 While there's sort of an unspoken asterisk to them, I'm not above including Last Name Gavins into my Greatest Gavins minicollection, and so John Gavin makes the cut. These two 2013 Leaf Perfect Game autos were the first high schooler cards I brought into my collection, later joined by Gavin Lux whom I posted about earlier this month. The gold parallel is #'d /50. John is currently attending Cal State Fullerton. He had been selected by the Brewers in the 39th Round (1,166th overall) in the 2014 draft. Good luck to you, Mr. Gavin, succeeding in college and hopefully pursuing a pro career. 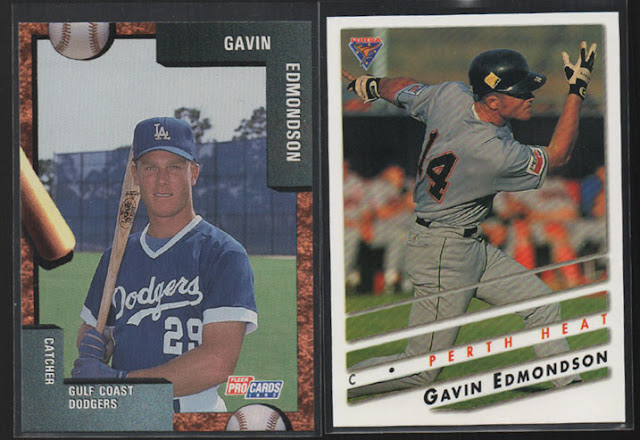 Here we have Gavin Edmondson. He's Australian, so that's cool.. bringing some international flair to the minicollection. He played a couple unremarkable years in the Dodgers chain (card on left), but went on to more success down under (card on right). The Australian Baseball League (ABL) was established in 1987 and disbanded in 1999. Information is scare, but looks like Gavin played down there from 1993 through to the bitter end, one of the elite Aussie catchers. I'm going to go ahead and call him the Johnny Bench of Australia, because why not. 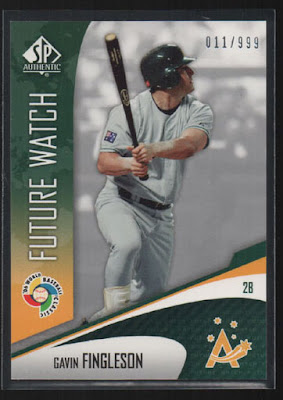 Now here's another worldly Gavin. Gavin Fingelson was born in Johannesburg, South Africa, and his family moved to Australia when he was 11 years old. And he's Jewish-- ooh, a Hebrew Hammer! Nice. He was named the Maccabi World Union Australian Sportsman of the Year three times. [1] He debuted in the ABL in 1993, then eventually came to the US and played independent ball, batting .330 in over 200 games from 1999 through 2004. As the featured card indicates, he also participated in the Baseball World Classic. 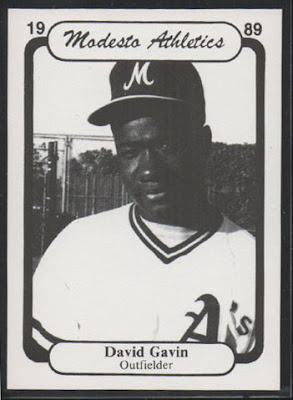 David Gavin, another Last Name Gavin, played in the Oakland organization in the late 80s, topping out in AA. The simple, black & white team-issued minor league card is a refreshing change of pace.

That's going to do it for today. Gavin Month will continue with more Gavins very soon!
Posted by defgav at 11:43 AM