A great Tony Gwynn auto to top off the PC

My Tony Gwynn PC has really been beefed up nicely lately. The big hit was a 2004 Retired refractor auto /25 last month. And last week I added an awesome signed "college years" card. Now I've landed another Gwynn I've been hunting for, this 2013-14 Upper Deck Black card featuring Tony from his days starring on the Aztec basketball team.

Terrific looking card! Love the afro on Tony yelling for the rock, and the sleek profile as he takes it deep to the hole, from back when Tony was a lean, mean, sporting machine. The gold ink auto on the black matte canvas looks fantastic. Yep, this is definitely a highlight of my collection. I'd say the triforce of my Gwynn PC would be the Retired refractor auto, the minor league card, and now this.
Do you think that term will catch on?

Triforce n. - 1. [Collecting] The 3 best cards within a PC or minicollection. 2. [Video games] An omnipotent sacred relic, representing the essence of the Golden Goddesses who created the realm of Hyrule.

It's no Best Binder Page that Junior Junkie came up with-- that I hope to maybe take my turn at one of these days, though I know I'm very late joining in.

I don't collect college/alumni cards nearly as hard as some other collectors do, but I love Gwynn SDSU cards. I'm a fan of his purely because of his career with the Padres, but it's really a cool coincidence that my favorite player happened to go to the same school I did. It's been said before but Gwynn was an excellent baller, setting Aztecs records for assists in a game (18), season (221), and career (590). He could have no-doubt played in the NBA but since he was a bit short compared to those big guys, he decided to stick with baseball. 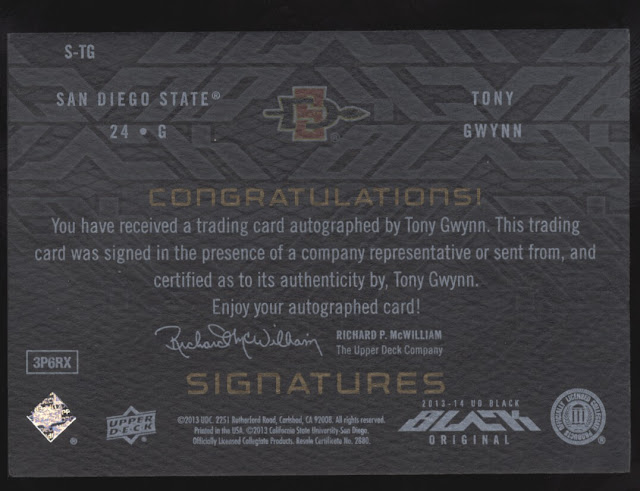 My Gwynn collection is at a nice place right now. With this card secured, I can't think of any other "white whales" swimming wild out there that I'm dreaming of landing. It's pretty much all gravy from here on out. Maybe his OPC rookie card would be a nice addition someday, but not that big of a deal to me. I'll continue to pick up Gwynns here and there, of course, but going forward I'll probably rely more on trades and less on purchases. If I never added another card, I'd be content with the PC I've built as it stands now. That's a good place to be!
Posted by defgav at 3:33 PM