Busting a box of 2015 Bowman Chrome

If you buy a box of Bowman Chrome from the last couple of years, there are basically 2 possibilities: 1) your box will be a dud, or 2) you'll pull an auto or parallel of Kris Bryant.

Was my box a dud?

But it was a gift, so it doesn't sting quite as bad. And there were a few decent, shiny cards which I'll show off now. 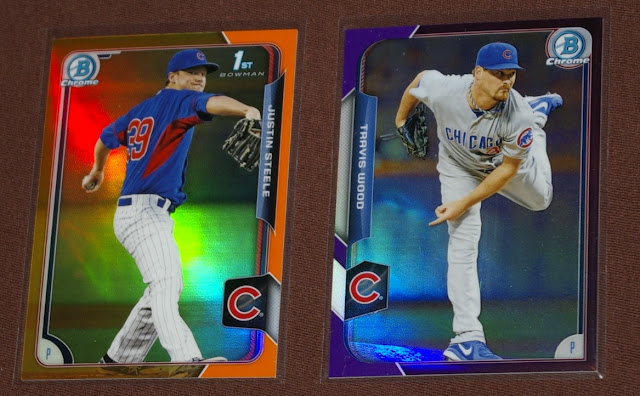 Hey look: my box yielded two colored parallels, both Cubs, yet neither is Kris Bryant, so they are dirt to me. Ha, nah, at least I've got a few trader buddies who are Cubs fans, so these cards will find a good home soon enough. (Tom, Nick, Tony B., CC.. anybody want to claim dibs?) I mean.. I might have to hang onto that orange Justin Steele card justin case, seeing it's a low-numbered parallel (/25) and maybe the best pull of the box, but the purple Travis Wood is definitely not long for my collection. 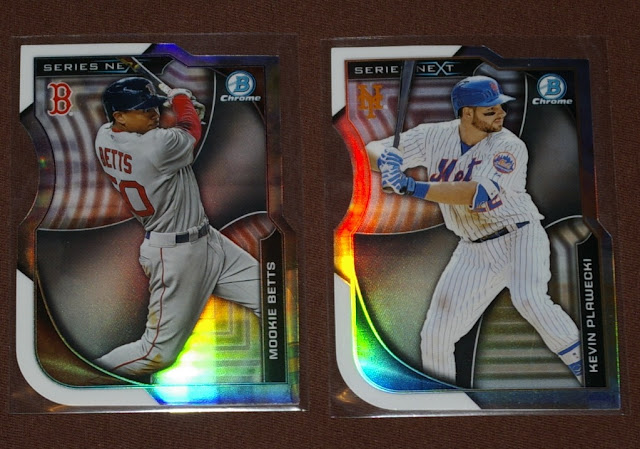 Got a couple of these diecut things. They're kinda neat. I was very happy about that Mookie Betts, as he's a guy I've started collecting of late, excitedly getting a little PC off the ground. And as for Kevin Plawecki, the baseball card gods are once again trying to get me to collect a guy, as a Plawecki card was the best hit out of my recent 2015 Diamond Kings box, and now I've followed that up by pulling this funky-shaped insert.

Three of those unfortunate jumbo minis (does anybody like these things?) and one /499 refractor were also pulled. Raisel Iglesias is a Cuban signing who made the jump to the majors last year, going 3-7 with a 4.15 ERA for Cincinnati.

Three of these Top 100 inserts. 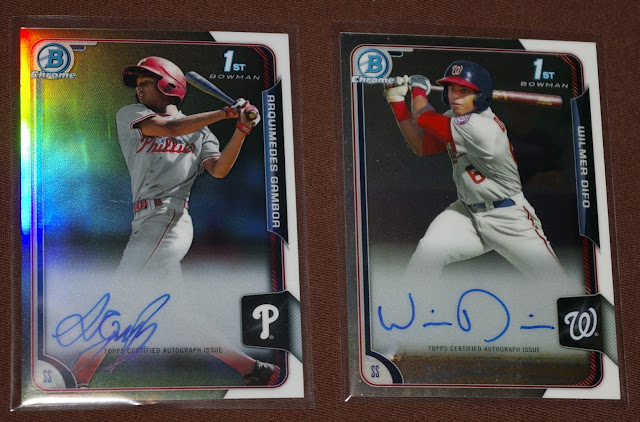 And the 2 promised autos. I lucked out a little pulling a refractor auto (/499).. nothing to get too excited about, but numbered and shiny is better than unnumbered base. Neither of these guys is a big name, though, so my mother-in-law wouldn't have hypothetically made her money back on this box, but hey, it was a fun enough break for me, especially since it was a gift.

Arquimedes Gamboa (great name) didn't do much during his 2015 season in rookie league, but he was only 17, so he's still got time to be somebody. Wilmer Difo (terrible name) got into 15 games with the Nationals last season and seems projected to be an adequate backup middle infielder. Neither card is the Kris Bryant I was after, but oh well, I like their signatures. Arqui's is all scrunched over on the left, and Wilmer's is like a cute doodle. 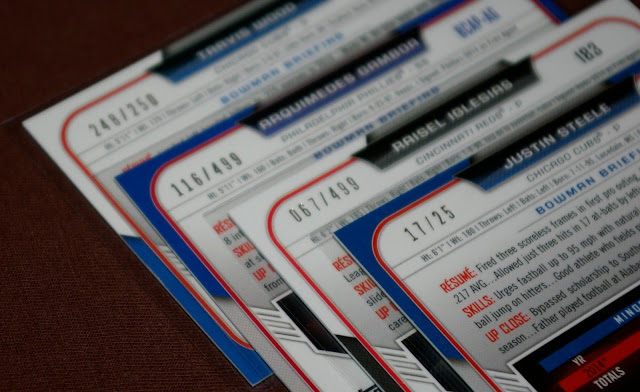 Here are the backs of the numbered cards I pulled. Another /25 card and still no 12/25 personally pulled by me, though my heart did jump for a millisecond as that "17" almost looked like a "12" when I flipped the card over. Alas...

So anyways yeah, those were the highlights from my box. Also plenty of base cards not pictured, mostly guys I've never heard of, as is the nature of Bowman. As far as trading, let me know if you're looking for anybody. As for the cards pictured in this post, most are available for trade, with only the Mookie being off the table, and the Justin Steele orange and Arquimedes refractor auto taking some convincing for me to part with.

Thanks for stopping by!
Posted by defgav at 3:38 PM