Gavins in sports besides baseball

The Blogger IT department has pleaded with with me to cut Gavin Month short because it's so popular that it really strains their servers everytime I publish a new post on the topic. "You're going to break the internets if you keep this up!," they cry. But I say nuts to them, Gavin Month continues!

Today we're looking at athletes named Gavin in my collection who didn't play baseball. (not counting Gavin Escobar who got his own post a couple weeks ago.) 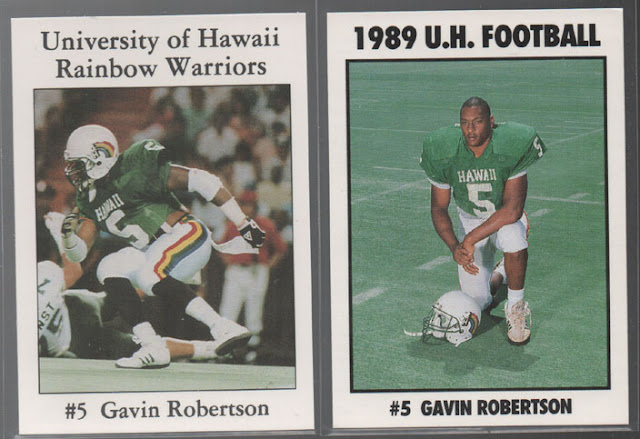 Gavin Robertson, #5, is represented in my collection with a couple collegiate cards from his time playing for the University of Hawaii. There's currently another amateur football guy named Gavin Robertson getting recruited, plus there's another Gavin Robertson who played pro cricket in Australia for many years, so trying to search for info on this Gavin Robertson is more work than I'm willing to do. This Gavin Robertson never played in the NFL, I can tell you that much. Gavin Escobar seems to be the only (first name) Gavin to ever play in the NFL. 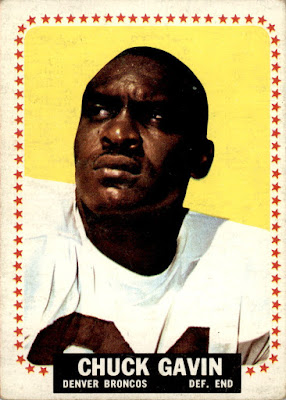 --But here's a last-name Gavin who did. Chuck Gavin played defensive end on the inaugural 1960 Broncos team. Chuck spent 1960-63 as a member of the Broncos, most notably scoring a touchdown in the 1961 season and grabbing an interception in the 1962 campaign. I love checking out vintage non-baseball designs that aren't very familiar to me, and this 1964 Topps Football card is pretty great. I think this recent pickup is now the oldest card in my Greatest Gavins collection (without bending the rules for Gavvy Cravath, who isn't a true Gavin, but close enough for me). 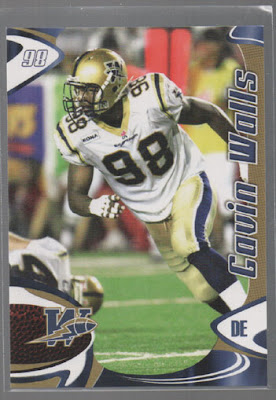 Gavin Walls played collegiate football for the University of Arkansas. Following college, he attended training camp with the Minnesota Vikings in 2004, but was cut before the regular season. He went on to have a fine career in the Canadian Football League, winning CFL Rookie of the Year for 2005.

Now onto the other football.. the one that's soccer. I don't follow soccer at all, though sometimes I wish I did. Just recently, my local Portland Timbers won a championship and it was a pretty big deal in town with a parade and everything. That's cool and all, but still doesn't "connect" with me at all. Blair Gavin was apparently a hyped up rookie back in 2010 (Not just 2010 Draft-- 2010 SUPER Draft!). Oh wow, looking him up just now, he played in Portland this year on the Timbers 2 squad, which I believe is like the AAA affiliate equivalent of the Timbers. 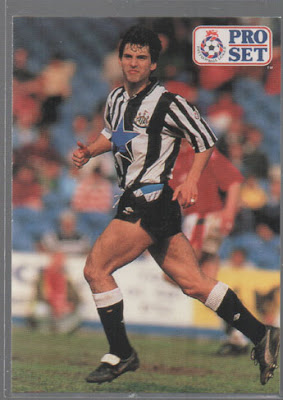 You can't tell from the front of this card, but this dude is named Gavin. Trust me. 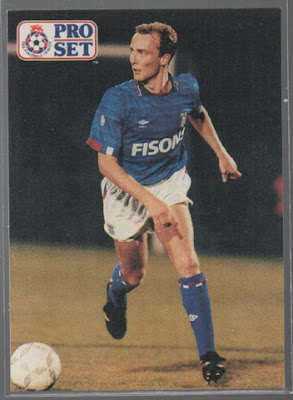 Again, this soccer playing man is also named Gavin, I assure you. Ok, enough of that. Howbout some hockey. 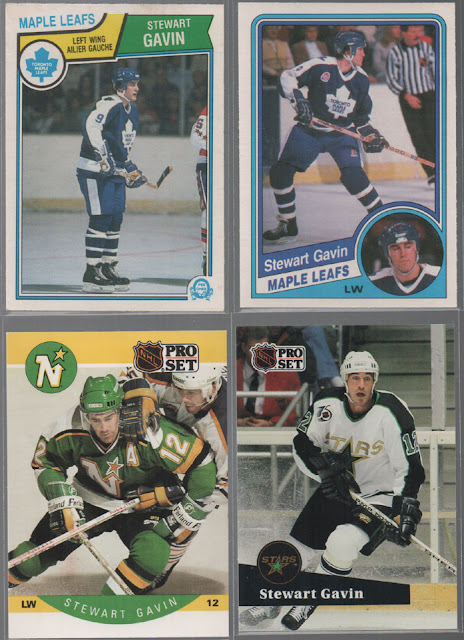 Stewart Gavin is probably the best known hockey player with Gavin in his name. I've got these 4 cards of him; a couple vintage-ish and a couple junk era. Anybody know if he's a good TTM signer? I've got an extra of the yellow Pro Set card that I wouldn't mind putting to good use. 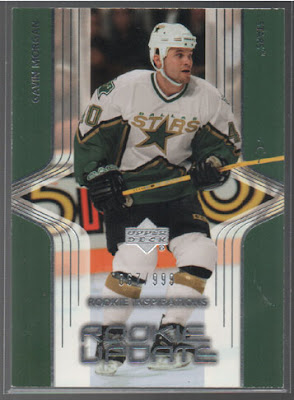 Serial numbered /999, for what it's worth. Gavin Morgan played 6 games in the NHL for the Dallas Stars, though most of his career was spent in the American Hockey League. 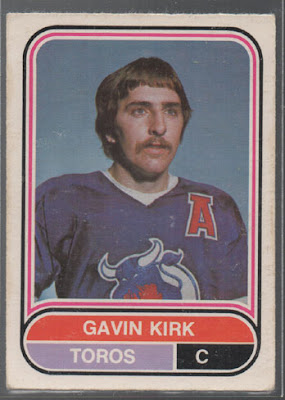 I mentioned I love unfamiliar vintage designs, and here's another great one for me. I believe it's a 1975-76 O-Pee-Chee card. Gavin Kirk was born in England and raised in Toronto. He played 422 games in the World Hockey Association, lacing them up for the Ottawa Nationals, Toronto Toros, Calgary Cowboys, Birmingham Bulls, and Edmonton Oilers. 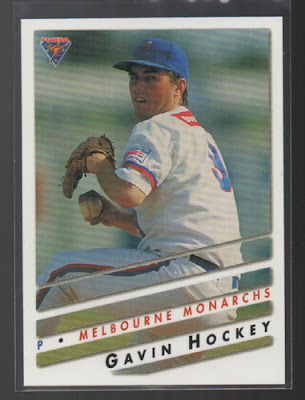 Ok, I just had to sneak in a baseballer. I forgot this one in my earlier post about lesser-known baseball Gavins. This is another Australian Baseball League card imported from down under. Gavin Hockey never played pro ball in the US. That's pretty much all I could tell you about him!

There you have it. A good bunch of Gavins whose careers I haven't followed at all, but they're still welcomed into my Greatest Gavins minicollection with open arms. If there's a guy named Gavin on a sportscard out there, I want it. Maybe one day I'll open a museum; a Hall of Gavins, if you will. Nah, that'd be dumb. But I'll continue throwing cards of guys named Gavin together in a little box. That works.

Hey, since very few people will bother to read this post, let's sneak in a contezt for you loyal readers. In the comments below, be the first to name one of the soccer Gavins pictured on the nameless Pro Set cards above that I was too lazy to look at the back of their card to type their names. You could probably figure it out on Google or something. First person to correctly name one or both will win a prize PWE from me. Hint: I seem to recall one of them has a bird name. Like Gavin Quail, but not that. So take a guess even if you're too lazy to try to research it.

UPDATE: Congrats to Swing And A Pop-up for correctly identifying the 2nd mystery Gavin as Gavin Johnson. The first one was Gavin Peacock. Shoot me your address, Mr. Pop-up, and I'll curate a PWE for you shortly!
Posted by defgav at 5:17 PM