It's time for more less-famous players from baseball families. Today's installment is a special edition of guys who are related to, well, tainted players, so maybe they aren't exactly the black sheep of the family after all! They might not have had as notable careers, but at least they can walk down the street with their heads held high without any lingering scandal hanging over them. Or maybe they still have to deal with a stigma of a besmirched family name even though they had nothing to do with it. 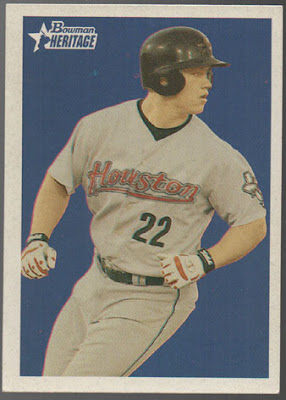 Koby Clemens is the son of Roger Clemens, probably the greatest pitcher of his generation, but an ugly trial surrounding whether a clubhouse worker helped facilitate his PEDs ruined his reputation and has thus far kept him out of Cooperstown. His son Koby played pro ball for a decade (interestingly with organizations his father played for: Houston and Toronto), but never made the majors. His best year was 2009, when he hit .341 with 22 home runs and 123 RBI. Overall, he was a career .255 hitter, though. The final stop of his career was with the independent Sugar Land Skeeters, with whom his father briefly came out of retirement to play alongside Koby. I was kinda hoping Roger would parlay that into a major league comeback, but it wasn't to be. 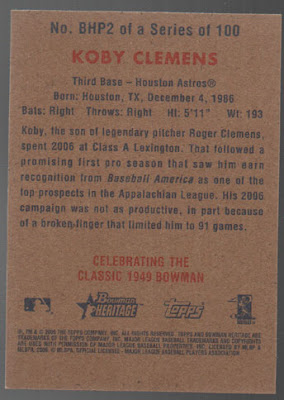 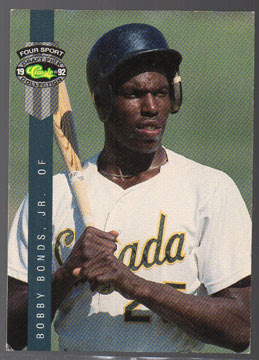 Here's another Black Sheep double-whammy along the lines of Craig Griffey. Bobby Bonds (Sr) was one of the most exciting players of the 70s, a legitimate home run threat who could also swipe 40+ bases in a season. His son Barry broke out for his first MVP season in 1990 and went on to win 7 such awards in his career while breaking Hank Aaron's all-time home run record, though his career was ended prematurely under a shroud of steroid accusations. Barry's younger brother Bobby Bonds, Jr was drafted by the Padres in the 18th round of the 1992 draft. After a few unspectacular seasons, he followed Barry to the Giants organization.

All told, Junior played for 11 seasons, but the closest he ever got to the big leagues was 23 games in AAA. Barry obviously wasn't sharing his enhancers with his little brother, as Bobby Jr only hit 38 home runs over his professional career, many of which were likely of the inside-the-park variety.

Barry recently signed on to be hitting coach for the Marlins, so it'll be interesting to see him back in the game come 2016. 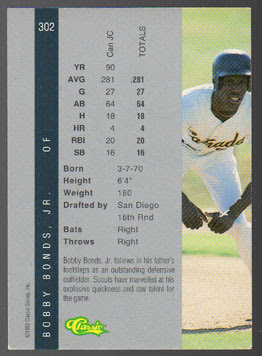 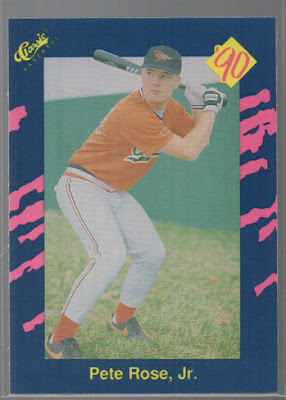 Pete Rose, Jr. first appeared on cardboard in 1982 as a bat boy on the classic "Pete & Re-Pete" Fleer card. While his all-time hit king father, Pete Sr. was banned from baseball for betting on the game, his son strove to follow in his footsteps on the field. Junior made the majors with the Reds in 1997, but only mustered a couple hits in 14 at-bats. But dang it, he was determined, and his pro career stretched from 1989 till 2009: 21 seasons! That amounted to 1879 pro hits. Add that to his dad's 4683 professional hits, and you've got quite the family legacy.

As a kid getting into card collecting in 1990, I remember being blown away by the concept of "ANOTHER PETE ROSE! PETE ROSE 2: THE SEQUEL!" But as the years went by, I suppose that was my first lesson that the children of great players aren't necessarily great players themselves. Still though, I'm strangely ecstatic about finally getting my first real Pete Rose, Jr. card here in a recent COMC order.

As for Rose Sr, Commissioner Manfred has promised to rule on his reinstatement request by the end of the year, so we should hear something soon. The fact that Shoeless Joe's (estate's) request was denied earlier this year (bullshit!) is not good foreshadowing for Pete. Personally, I'd love to see him reinstated with the caveat that he not be allowed to manage at any level (not that any club would hire him at this point). But whatever. 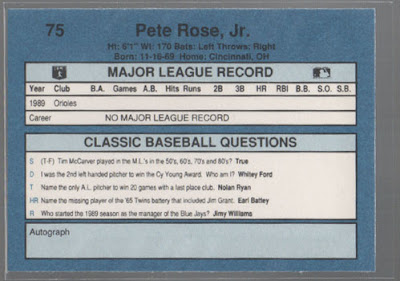 That's it for this installment of the black sheep minicollection. Tune in next time for more less-famous relatives of star ballplayers!
Posted by defgav at 1:12 PM