Gavin Month continues! The first guy named Gavin to ever play in the major leagues was Gavin Floyd. Out of the 3 or 4 Gavins currently in the minors, the guy with the best shot to become the 2nd MLB Gavin is Gavin Cecchini. The Mets' 1st pick in 2012, his pro career was slow to get off the ground, but this past season in AA, he put it all together to jump back up the prospect rankings, with some folks expecting him to get a bite of the big apple in 2016. It's his birthday today (12/22)! So let's celebrate by taking a look at my PC of his cards. 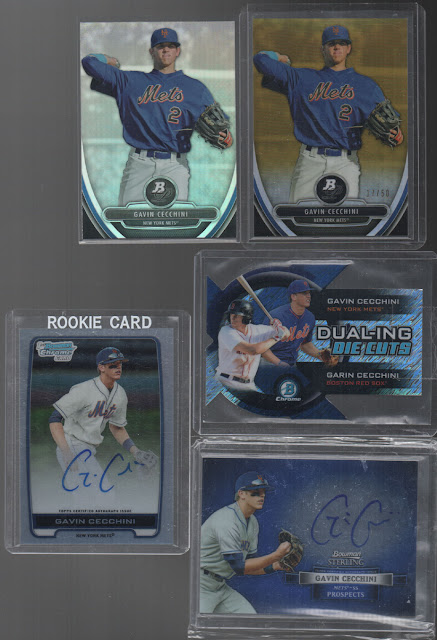 Here are the Bowman cards I have of him. A couple /50 parallels and a couple non-numbered autos.

He looks comically young on that USA card from 2011. Then there's a generic minor league card and Heritage Minors card. 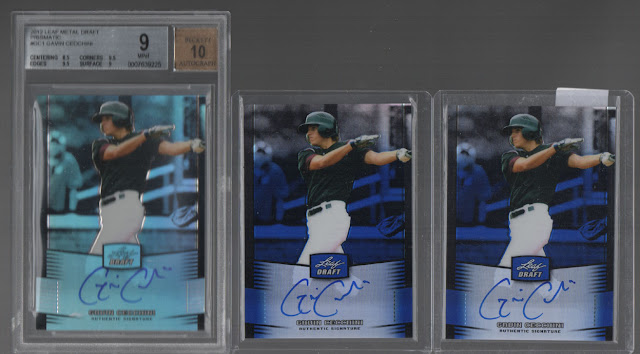 This trio of similar autos is from 2013 Leaf Draft. 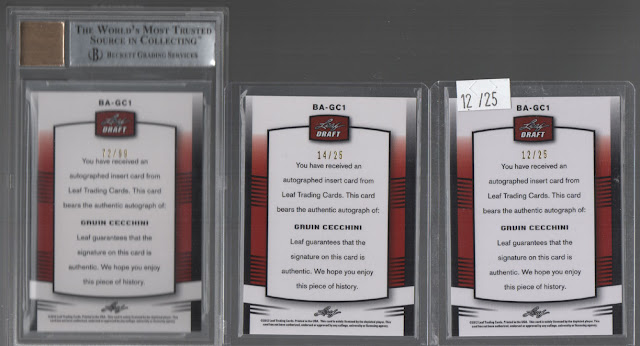 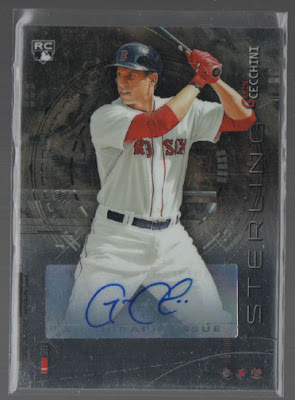 Hey, wait a minute! This isn't Gavin! It's his older brother Garin Cecchini, who also made an appearance in the dual card in the first picture of this post. I picked up this 2015 Sterling stickergraph a couple weeks ago. Garin played a little with Boston the past couple seasons, but mostly in AAA Pawtucket. What I find interesting is the similar signatures these guys have. I'm an only child, so I don't really know, but seems odd that siblings would sign their name in a same distinctive way. At first I thought this was another Topps fail, slapping the wrong sticker on a card a la the Mike/Mike Piazza mixup, but from looking at Garin's other autos, it seems legit, with these guys just having strangely similar looking autographs.

Anyways, that's 10 different Gavin Cecchini cards to close out 2015. I'd be down for any others I'm missing, if you've got any and are looking to trade.
Good luck with your career, Gavin!
Posted by defgav at 4:51 PM