You know me; I like making my own custom cards. Instead of just randomly spitting out cards here and there, I wanted to group them together somehow. I had toyed with the idea of "putting out my own set" (just tiny runs of like a dozen copies consisting of 50 or so random custom cards) but ultimately I decided that'd be biting off a lot, and what I'm going to do instead is make a few small sets of 9 cards each, or what I'm calling a Custom Nine. Basically like little insert sets to a nonexistent base set.

Nine is a great number in the card world because such a set fits in a standard 9-pocket page. Plus you can ship 9 cards in a PWE. And I can set out to make a set of 9 cards without getting too overwhelmed, and I can keep the topics fresh with what interests me. The tricky part will be either, 1) trying to come up with nine subjects, or 2) having to narrow it down to only nine subjects. But I'm excited about this idea and hope to have some fun with it going forward.

The inaugural Custom Nine that I'm announcing today is called Cardsphere Heroes! Many of you have already received one of these cards in the mail from me as a surprise holiday gift. 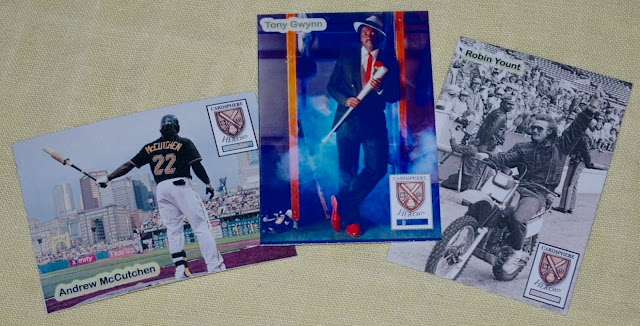 I had to leave off several legit candidates, so apologies if your #1 guy isn't among the nine. But hey, I'll probably do another Cardsphere Heroes set in 2016 with 9 different guys.

As for the design, I just went with a simple, Stadium Club like approach, trying to find cool photos of the guys that I hadn't seen on cardboard before. The backs have a second photo and a little write up. Being this is the first actual "set" type thing I've tried to do, it was a learning experience and the cards aren't perfect, but overall I'm happy with how they turned out. 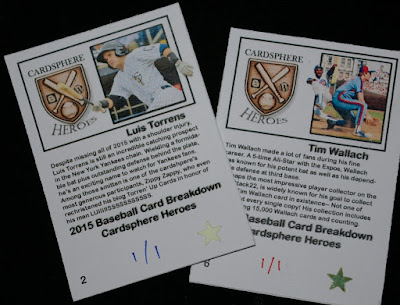 I got cute and made every Cardsphere Heroes card a 1/1 parallel. They're distinguished by a star on the back and the color ink used to hand-number 1/1.

Most of the cards have only those 6 parallels, however I "double printed" the Griffey and Gwynn with 6 additional 1/1s, each with a shiny green star on the back. (These guys have a lot of collectors out there, so I wanted to have enough to spread around.)

Anyone interested in any of these can get in touch with me about a trade.

I've already got several ideas for more Custom Nines kicking around that I hope to do in 2016. One idea that seemed to get some traction in the comments of my recent "buying/selling cards on the blogs" post was the idea of creating a set featuring prominent bloggers. That's definitely an intriguing suggestion. It's sort of like the Cardsphere Heroes idea (though for the record, I've had this set in the works for months). A set of bloggers could be tricky trying to narrow down to 9 top bloggers. If I had to come up with a list myself, I would inevitably feel bad about leaving people out. Maybe I'll wait till the year-end awards (Will the Bip Awards be back this year, I wonder?) and try to work out with whoever runs them to share the top 9 vote-getters for Blog of the Year with me. That could solve the "who to feature" question. But even then, I imagine not everyone would want their picture on a card. Some folks are private when it comes to stuff like that, after all. But maybe they could do something like Fuji (South Park version of themselves) or jaybarkerfan (dressed up in a costume). Hmm. Well, any thoughts on a blogger set, please feel free to share them in the comments below.
Posted by defgav at 3:37 PM