Nice to see my holiday mailings are starting to arrive and folks seem to be happy with the contents! I'll have more details on Cardsphere Heroes in tomorrow's post, but today here's a box review.

Gold Label is a fancy product Topps put out for a few years around the turn of the millennium. I've come across a few singles here and there in trades and dimeboxes, and they always catch my eye because every card is a beautiful refractor. Hell, even the wrapper is a refractor! 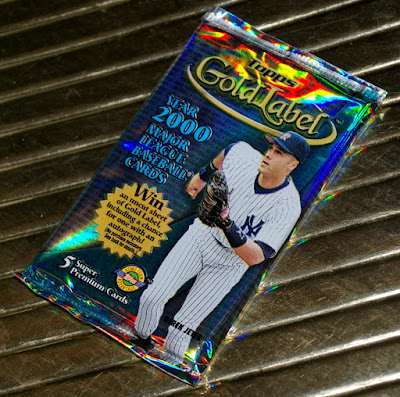 I took a curious look and was able to find a hobby box of 2000 Gold Label on eBay for the price of a couple blasters. While it has the look of a high-end product ("super premium," as the packaging states), there aren't any autos or even relics in there to chase (at least not in 2000), only a shot at redemption for autographed uncut sheets or something.. and since that promotion has long since expired, unopened product isn't too pricey these days.

I figured it'd be a fun break to net me a few PC additions and add some shiny to my tradeables. I used the box for my "cardless days" breaks (ripping 1 pack a day on a day when I otherwise didn't get any new cards), so it took me a while to get through the box. Let's check out some highlights! 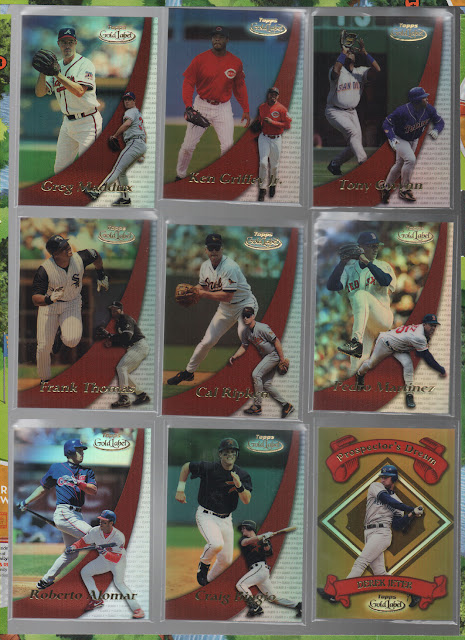 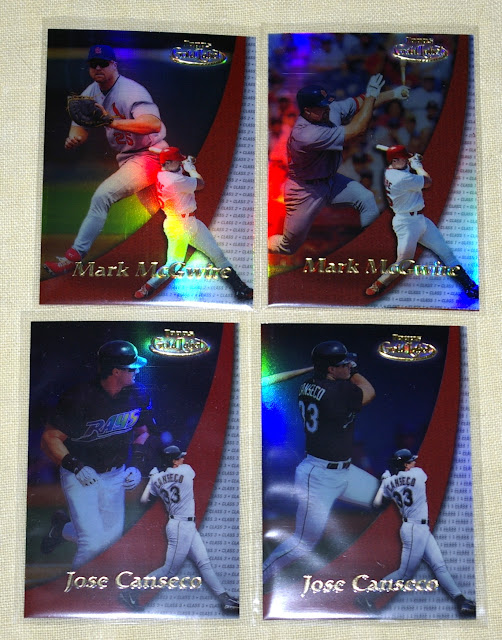 Seeing double? One thing I didn't realize until I was nearly finished with the box: There are 100 players on the base checklist, but each of them has 3 different variations. Class 1, Class 2, and Class 3 are noted on the back, and are basically all the same but with different background photos on the front. In this year of the product, all three were produced in equal quantities, so it doesn't really mean anything if you pull a Class 3 card vs. Class 1.. it's not an SP or anything, just Topps being weird. You'd think they could just put 300 players in the set instead of 100 x 3.

So yeah, you OCD team collectors out there might need to collect your team in triplicate. 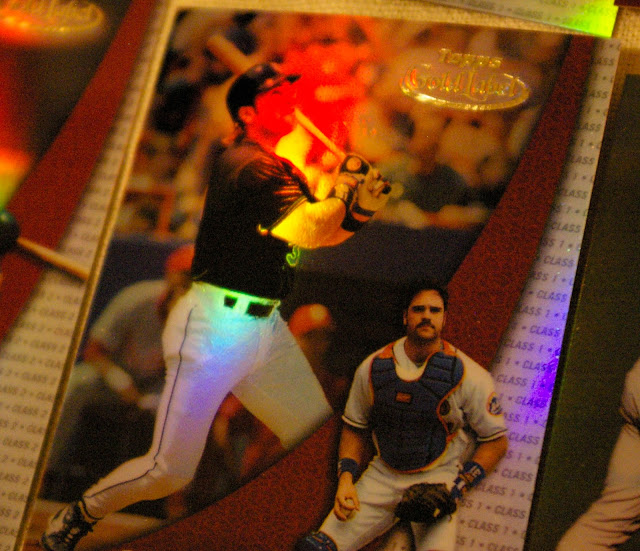 You can see the "CLASS 1" on the right. Call me slow, but I didn't realize the significance of that till I started working on this post.

There are also gold parallels with a diecut deckle edge that are #'d /100 and seeded 1:68, but I didn't pull any of those, unfortunately. 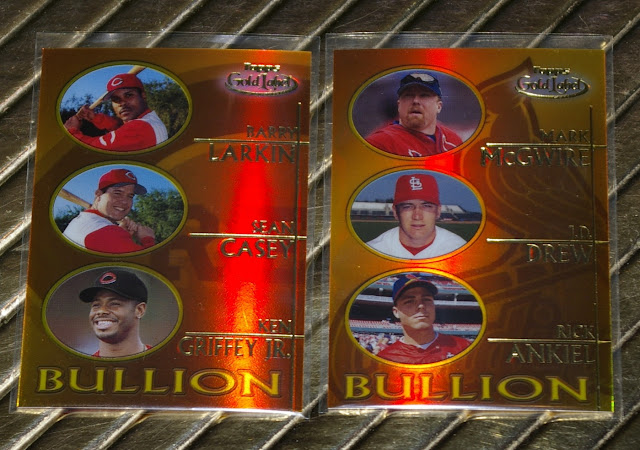 The toughest card I pulled is a Bullion insert, seeded 1:32. At 24 packs per box, I definitely beat the odds by pulling two of them from my box. The Larkin/Casey/Griffey might be the highlight of the box. McGwire and the boys are fine too. 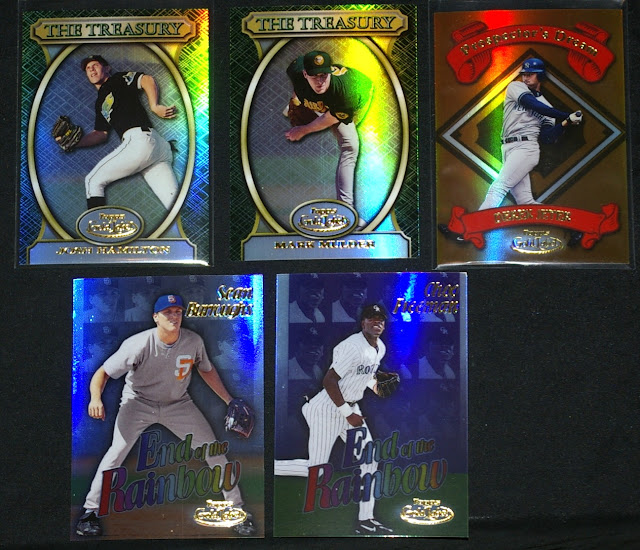 The Treasury, Prospector's Dream, and End of the Rainbow are the other inserts. Since the names are hard to read, I'll list 'em off: Josh Hamilton, Mark Mulder, Derek Jeter (another nice pull), Sean Burroughs, and Choo Freeman. I also pulled an Eric Munson "End of the Rainbow" but it's been mailed off to somebody already. 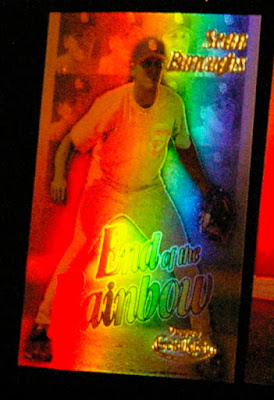 Here's a photo of an End of the Rainbow card in a refractor rainbow. As it should be. (Too bad Sean's career melted like a wet witch. Sorry, that was supposed to be a Wizard of Oz reference. That would have made more sense if the inserts were called Over the Rainbow.) 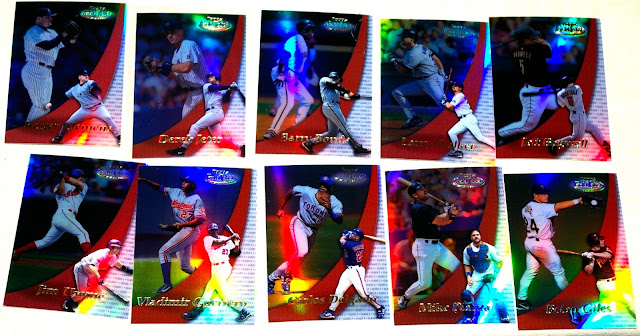 Here are some more dudes I collect. Doesn't that look just like a bowl of Skittles?! 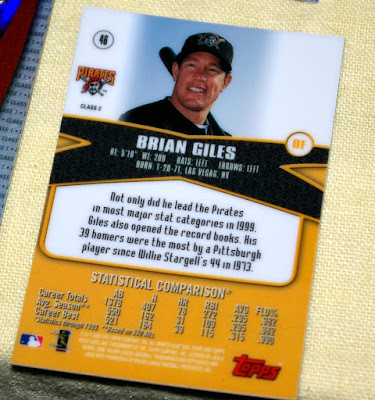 And here's an example of what the backs look like.

One more funny thing about this product to mention: It seems that the last card in every pack is cut a bit narrower than the rest. It's not quite "mini" levels smaller, but enough to be noticeable when you've got a few in-hand.

Here's a scan of the bottom of a stack. You can see there are 3 cards that are significantly narrower than the rest. Weird. Unannounced stealth parallels! haha

And that's that. Not a bad box. Thanks for checking it out with me.
Posted by defgav at 3:38 PM