Haul from the Nachos Grande final group break of the year

I was originally gonna sit this one out, but after time went by and the Red Sox remained unclaimed, I went ahead and signed up for them in Nachos Grande's recent big mixed group break. There are several Sox guys I PC, plus I can always use more Boston representation in my trade box for my old trade buddy Mark Hoyle and now my new trade buddy at Shoebox Legends. As the deadline to sign up approached, Chris and I worked out a deal for me to pick up all the unclaimed teams at a discount. So I ended up with quite a haul.

Let's check out a bunch of highlights.

It's just a base card, but I was happy to get an Ortiz out of the Tek box; neat cards. Bryce Brentz refractor auto #/499 is perhaps the best card I got out of the break. Brentz isn't a huge prospect or anything, but he cracked the majors this past season and hit a sweet .308 in 9 games. And the Stadium Club (rainbow foil?) parallel is kinda cool. I know it says Shane Victorino on it, but it'll likely end up in my Big Papi PC as a cameo card. 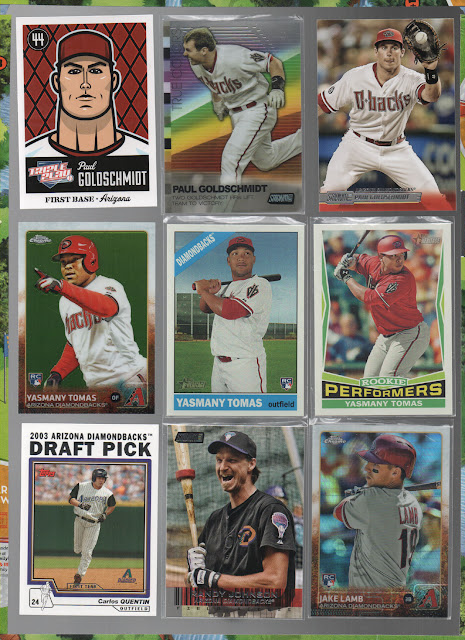 Here's a scanner bed full of Diamondback highlights. A nice trio of Goldschmidts. A nice trio of Yasmanys. Great Randy Johnson insert. That Jake Lamb RC is one of those crazy refractors.. those ones that are like "this is what xfractors look like this year" but for some reason Topps got cute and called them "Prisms" even though in the card world, Panini has a firm hold on the term. 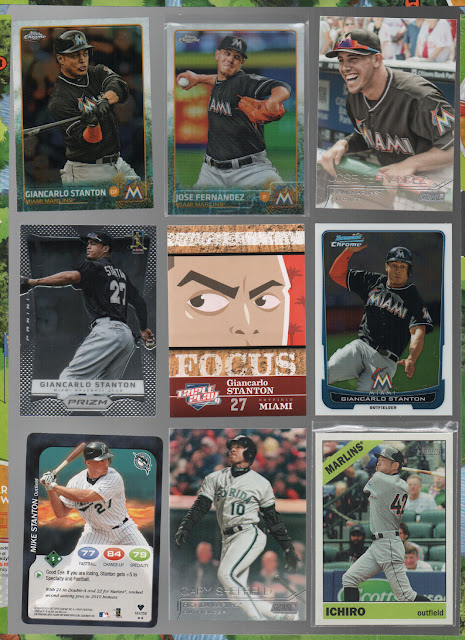 A scanner bed full of of Marlins highlights. The Jose Fernandez top middle is a refractor, though you can't tell in the scan. Nice lot of Giancarlos, though I think I already had them all. The action variation Ichiro is the best card here. 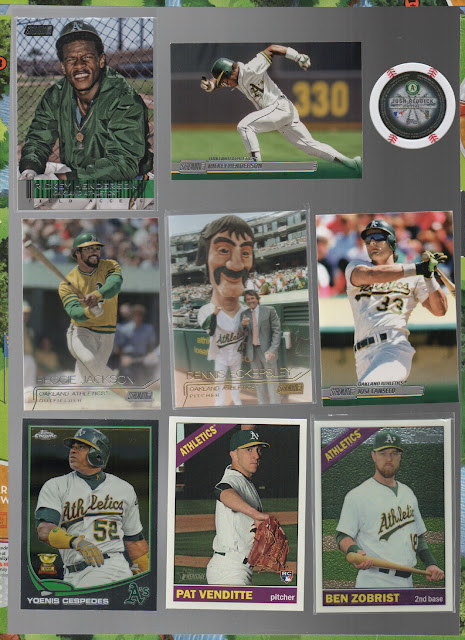 A scanner bed full of A's highlights. Love the Rickeys. And the Reggie. And the Venditte.. that was the base card I was hoping to pull from the box of 2015 Heritage High Numbers.. glad that worked out. The Chip is a Josh Reddick metal parallel or something. It and the gold parallel of the creepy big-head Eck are available for trade if anyone wants them. Oh, and that Zobrist Chrome parallel.. I believe that's #/999. 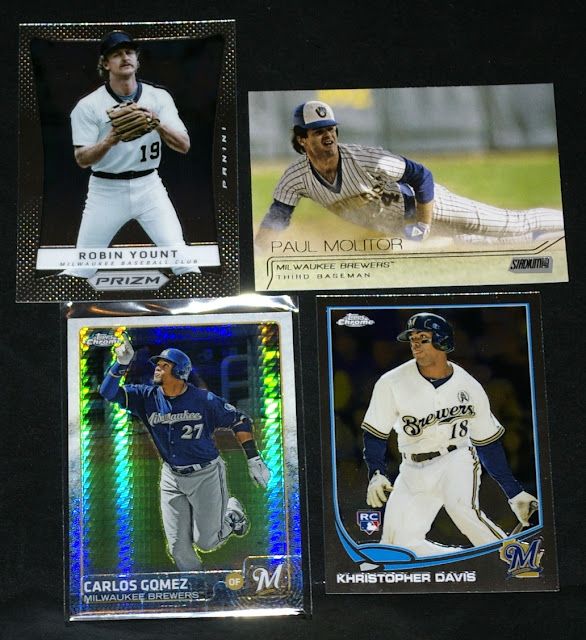 The Brewers slot didn't net me much, but the Yount and Molitor may be PC additions.. I need to check if I need them. The Khris Davis Chrome RC is nice. And here we see a better representation of a "don't call me an xfractor, call me a prism even though that's not what I am" parallel of Carlos Gomez.. this'll likely end up with Tony L. before long. 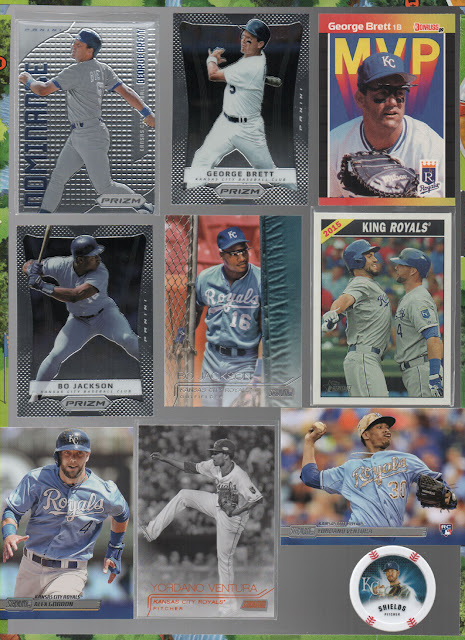 A scanner bed full of Royals highlights. A few new Brett cards for the PC. A couple Bo cards. Cool Yordano parallel. And that James Shields chip is a glow-in-the-dark one (though these things barely glow at all.. pretty disappointing, really. They should make the actual Chip material out of glowing plastic, not just a tiny little area behind the player photo). But still, this is cool, as I have been working on building up a little Shields PC lately, seeing how he's the best pitcher the Padres got right now. 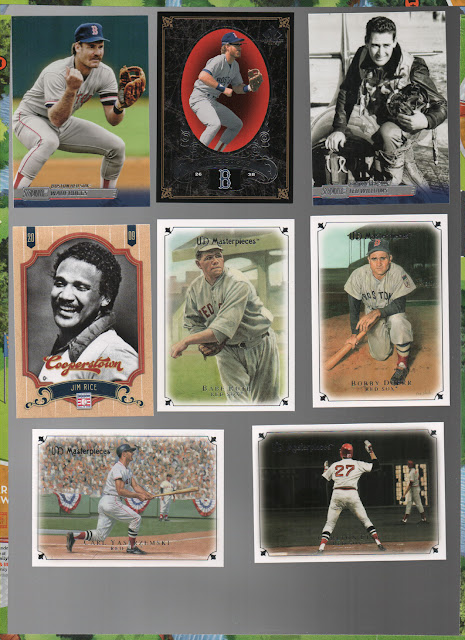 Lots of Red Sox highlights, starting with the retired guys. Love the Ted Williams. And there's another card for my non-Yankees Babe Ruth PC. Gotta love UD Masterpieces. These are the glossy versions, not the fancy canvas ones, but still nice. 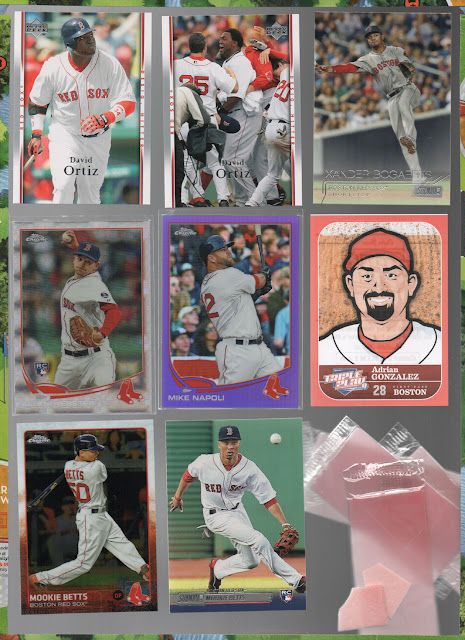 Final scan. More Papi. A Xander. A couple refractors. A new Adrian for the PC. I love Mookie Betts and was happy to get these two new additions (I was really crossing my fingers for Chris to pull a Betts auto for me, but I'll settle for these two base cards.) Oh, and at the end there.. that's gum. Part of my deal with Chris is that I got all the gum from the break! I'm happy to report that it's all pink. You know the old saying, "If it's brown, put it down. If it's pink, it's ok, I think." I haven't chewed any of it yet, but I probably will soon. I'm a gastric daredevil like that.

Thanks for another fun break, Chris!
Posted by defgav at 3:55 PM